Ever been to Žďár nad Sázavou? No? Okay, let me give you a bunch of reasons why I believe adding Žďár to your list of trips to go on from Brno is a very good idea!

31 Aug 2019. When my trip to Žďár nad Sázavou happened back in late August, summer was in full swing in Brno. In fact, the weather had been so beautiful the whole week that I couldn’t refrain from escaping the city as soon as I could, first thing on Saturday morning.

As most day trips I have taken so far, the Žďár one was half planned, half improvised. In the three years I have spent in Brno now I have piled up an unimaginable amount of lists of places to see, which lists I regularly update and/or rewrite after I’ve learnt about some cool village, town or natural area I have yet to visit. 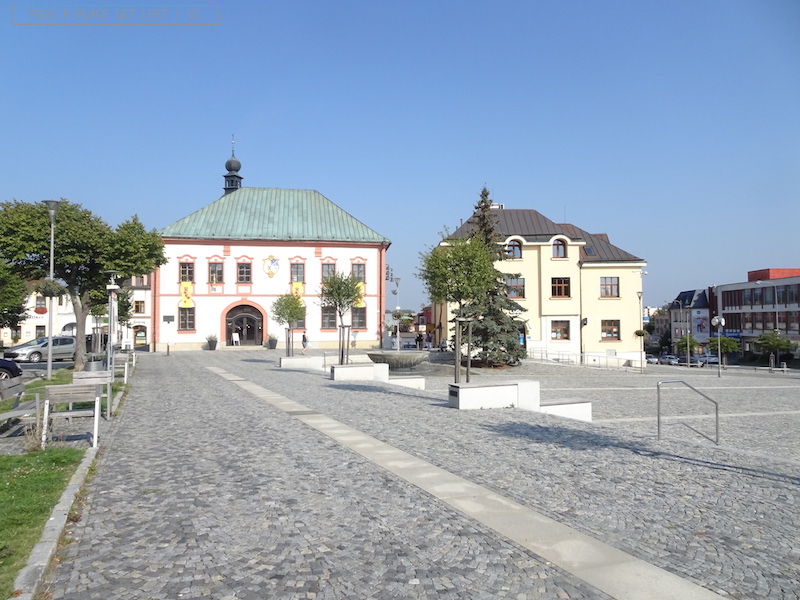 Žďár was included in at least three of these lists of mine. Plus, my colleague and friend P. is from Žďár, so she, too, mentioned it at some point during some conversation at work. Last but not least, Žďár is super well connected with Brno via direct train (the journey is around one hour and a half).

All in all, I had plenty of reasons to plan a trip to Žďár. So that Saturday morning I woke up early, and instantly knew the destination of my day trip. I headed straight to Královo Pole nádraží, one of the Brno train stations where Žďár-bound trains depart from. (The other is Dolní nádraží – at least for the time being, since Brno main train station is currently undergoing major renovations, so it’s virtually shut.)

Žďár nad Sázavou (Žďár for friends) is located in the region called Vysočina (‘Highland’ in English), which sits between Bohemia and Moravia. The town gained prominence between the end of WWII and the fall of the communist government, when steel works were built in the city, thus contributing decisively to its growth.

Today Žďár is a popular tourist destination and ski resort with plenty of sights to keep you busy for (at least) one day (if not more). Of course I didn’t go everywhere. Of course I didn’t see everything. But I did enjoy my fair share of sights and places of interests, so let me tell you why I think adding Žďár to your list of trips to go on from Brno is a very good idea. 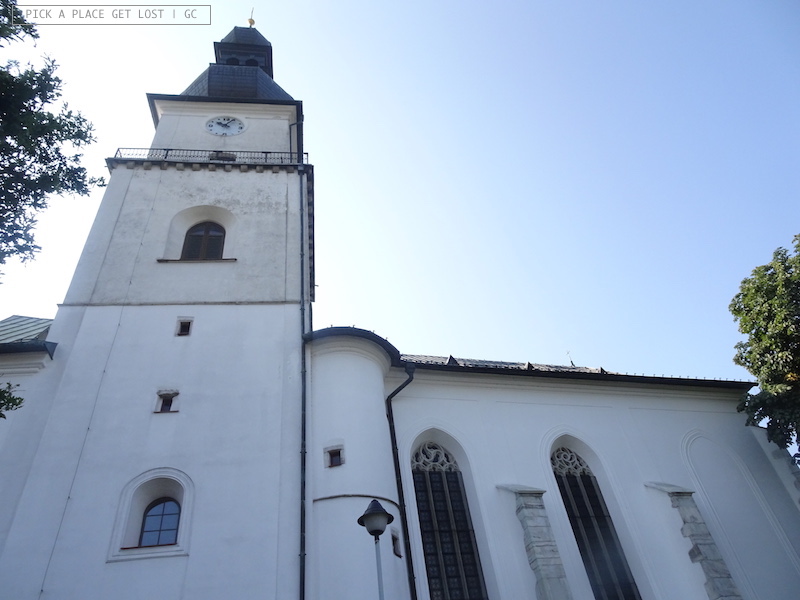 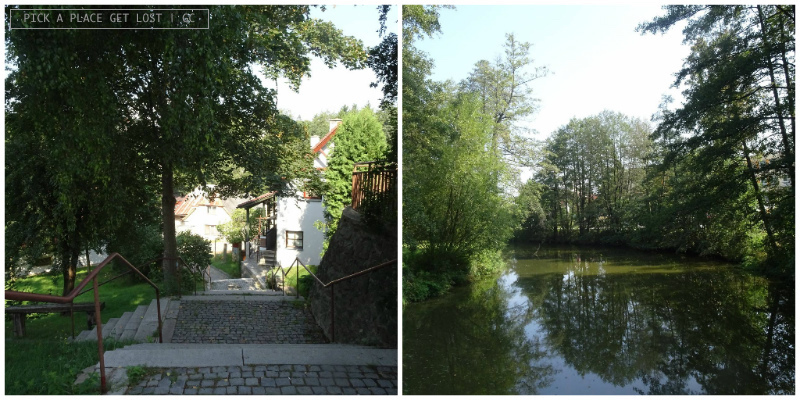 Stairs leading down to the Sázava river

As you step out of the train station (nádraží in Czech), head straight toward the roundabout, and take the road called Nádražní. It doesn’t take long to get to the centre. In fact, if you walk down the main road for about 1,5 km, you will soon find yourself in Náměstí Republiky (Republic Square), Žďár’s main square.

Overlooking the square is a number of notable buildings and monuments, such as the Old Town Hall, the super Baroque Holy Trinity Column (Sloup Nejsvětější trojice), and the Five Sources Fountain (Kašna pěti pramenů).

Inside the Town Hall building, you will also find a small Information Centre. I wanted to get hold of a map of Žďár, because I (also) wanted to explore the surroundings, so I tentatively popped in, half thinking it might be closed. In fact, not only will you find a Žďár map (and a good one), but if you speak Czech, the elderly lady at the counter will most likely advise you on which monuments are especially worth visiting, plus you might gain extra handy tips on this or that typical restaurant in the city. 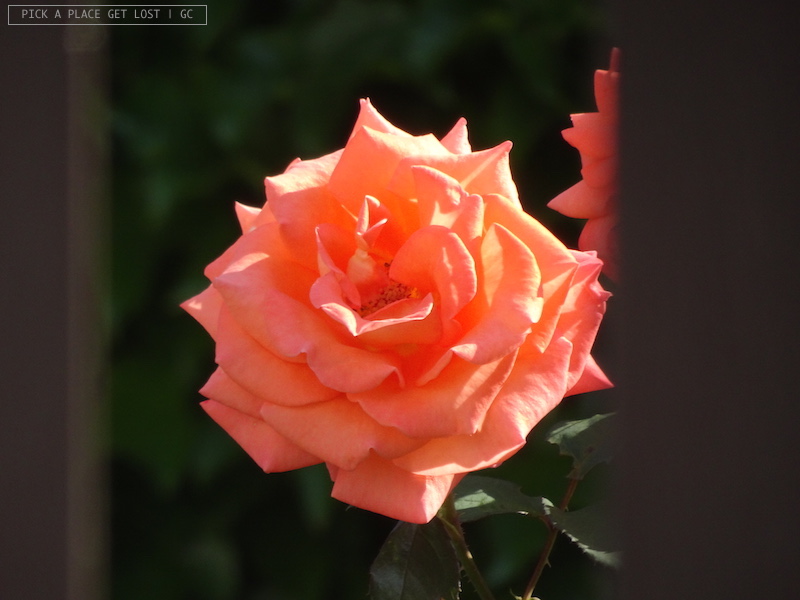 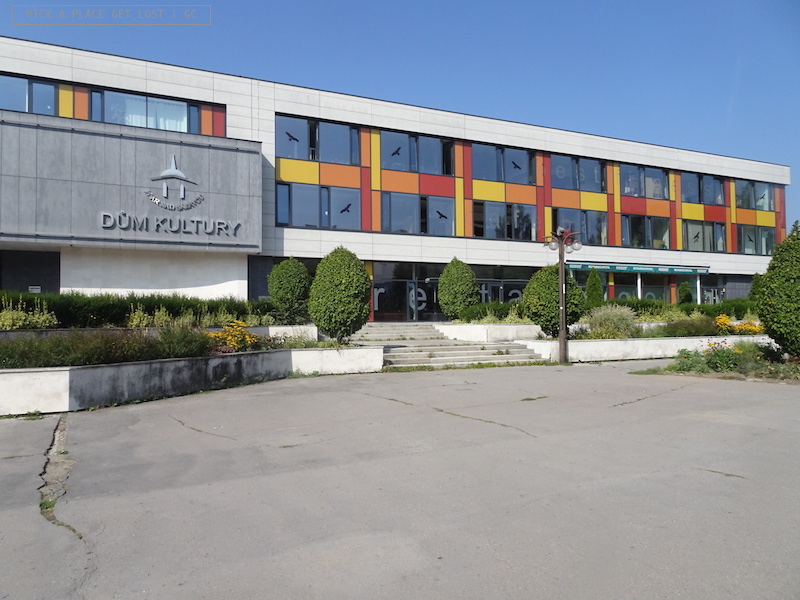 Walk up the street called Tvrz, to the left-hand side of the Town Hall. A little further on, on your right you will find Gothic St. Procopius Church (Farnost sv. Prokopa), originally dating back to the 13th century, and adjacent St. Barbara’s Chapel (Kaple sv. Barbory), built in the 18th century in simple, almost elementary Baroque style.

Head down the stairs by St. Procopius, past the Regional Museum (Regionální muzeum) and along the Sázava river. That’s the point where you keep to the main road, which is called Dolní, walk past the huge Dům kultury (House of Culture) building, and just keep walking north for about 2 km.

Dolní will take you straight to what is likely the most popular and most stunning place of interest in the whole of Žďár: Zelená hora and the Pilgrimage Church of St. John of Nepomuk. 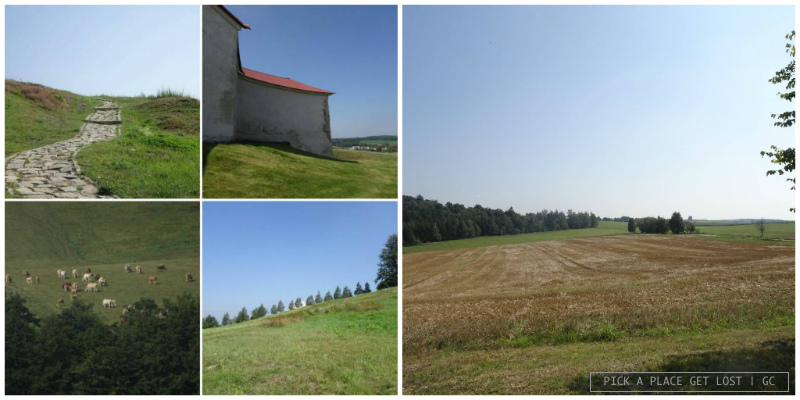 The road to Zelená hora is objectively rather nondescript, nor are there any landmarks along the way. There might be a more scenic route to reach the hill, e.g. if you take side streets off Dolní. I kept to the main road because it was the easiest and fastest way to get there. But feel free to experiment with the surroundings!

Zelená hora is not quite a ‘Peppa-Pig’ kind of hill, not as much as Mikulov’s Hill of Crosses anyway. It does, however, stand out in the landscape, especially because it opens up in front of you when you don’t expect it, as you’re walking through a super residential suburban area.

When I was there the weather couldn’t have been sunnier and brighter, and that made the green grass that covers the hill slopes even greener, the church complex sitting on the top even more solemn, and the scenery stunning, to say the least.

(I know I’ve used the word ‘stunning’ a couple of times already, nor will this be the last occurrence of the word in this post.)

Once you’ve taken a moment to take in the view from below, do climb the hill. It’s not awfully steep, and anyway, it’s just something you can’t avoid. Climb it now, climb it good. 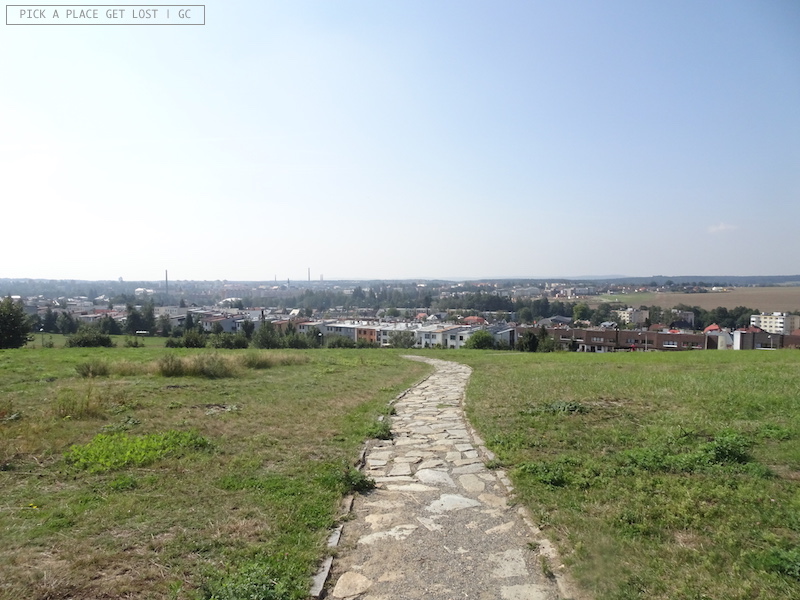 Once you’re on the top, you’ve got to do at least two things: visit the church complex and circle round the hill to enjoy the view from all sides.

The church complex in question is, as I mentioned above, the Pilgrimage Church of St. John of Nepomuk (Poutní kostel svatého Jana Nepomuckého).

Built in the early 18th century, it is dedicated to John of Nepomuk, the martyr and saint of Bohemia who was drowned in the Vltava river by order of King Wenceslaus at the end of the 14th century. The location of the site is not coincidental: Zelená hora is where John of Nepomuk received his early education.

Unesco listed St. John of Nepomuk as World Heritage Site in 1994, and for all the good reasons. The church is the result of an articulate project based on mathematical principles (repetition of specific numbers in the layout and proportions) and complex visual and formal symbolism. As long as he complied with the requirements of a pilgrimage church, architect Jan Santini Aichel was allowed to second his own taste and ideas, which, here as in many of his buildings, echo the unique, radical style of Italian architect Francesco Borromini. 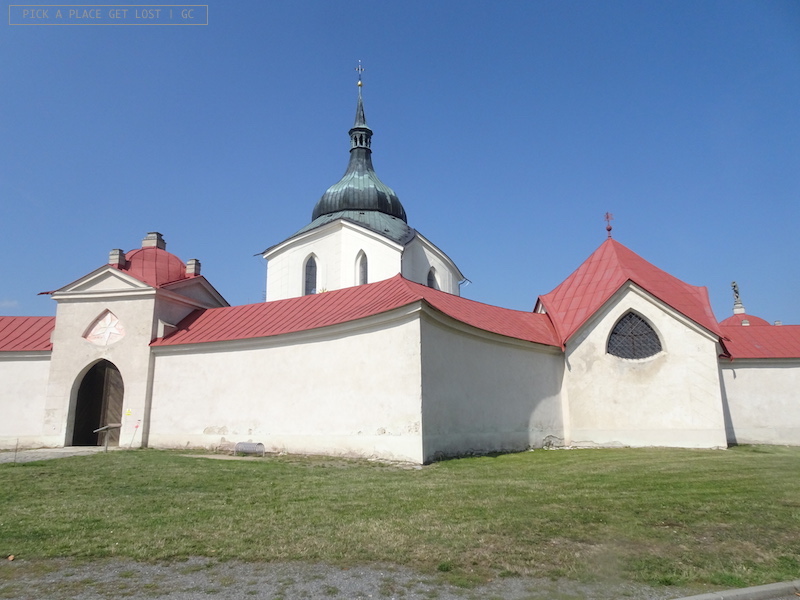 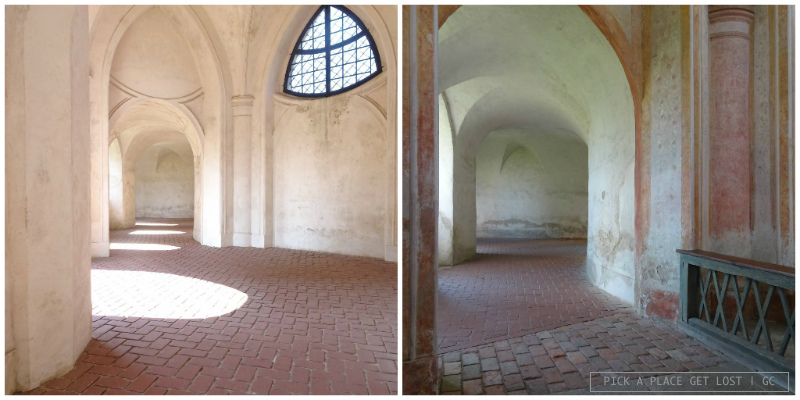 The complex defies all descriptions, and can hardly be labelled or categorised, though its unique architecture makes it a prime example of the style known as ‘Baroque Gothic’ (a contradiction in terms, yes, but it’s a thing). The contrast between its massive size and the extreme elegance of the lines hardly goes unnoticed.

I was there on a Saturday morning, so the site was rather crowded with families, locals and tourist groups. Additionally, the site appeared to be under renovation. That meant there were cranes and building materials piled here and there in the courtyard and, as a result, the photographing part got a little tricky at some point.

My favourite part was the walk around the cloister, which, aside from the fact that it’s covered and it follows the whole perimeter of the church, is quite unlike most cloisters I’ve ever seen. Because it lacks the colonnade structure typical of cloister architectures, it only has a few openings, consisting of tall, narrow windows and, at regular intervals, arches that give access to the courtyard. 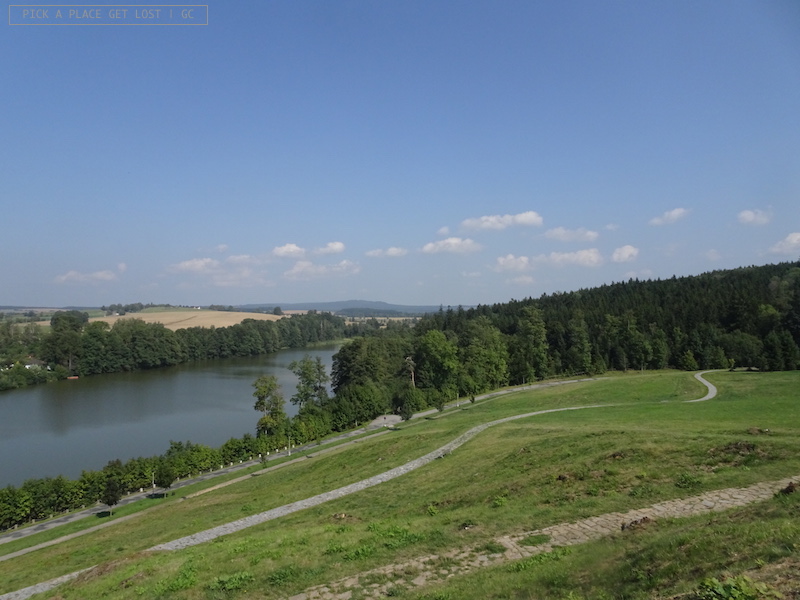 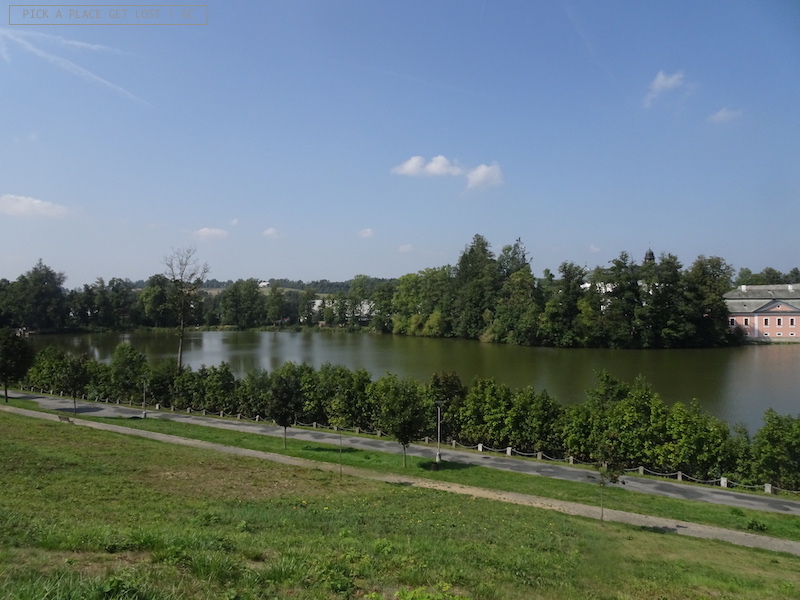 The overall effect is that of a dimly lit corridor with frescoed walls and the odd altar here and there. I’m not a huge fan of religious architecture, but the coloured walls of the St. Nepomuk cloister are quite something. I’d love to go back around sunset, as I’d expect the late afternoon sun to give the light and the colours that extra shade of warmth that make it almost surreal.

As for the views, you’re simply spoilt for choice. On one side you’ve got the whole of Žďár at your feet, on another it’s all hills and fields stretching as far as the eye can see, while at the back you will see a path heading downhill toward trees and ponds.

I obviously went for the path heading downhill toward the ponds. But in order for me to talk about it, I believe a little extra context would be of help. So here it is. 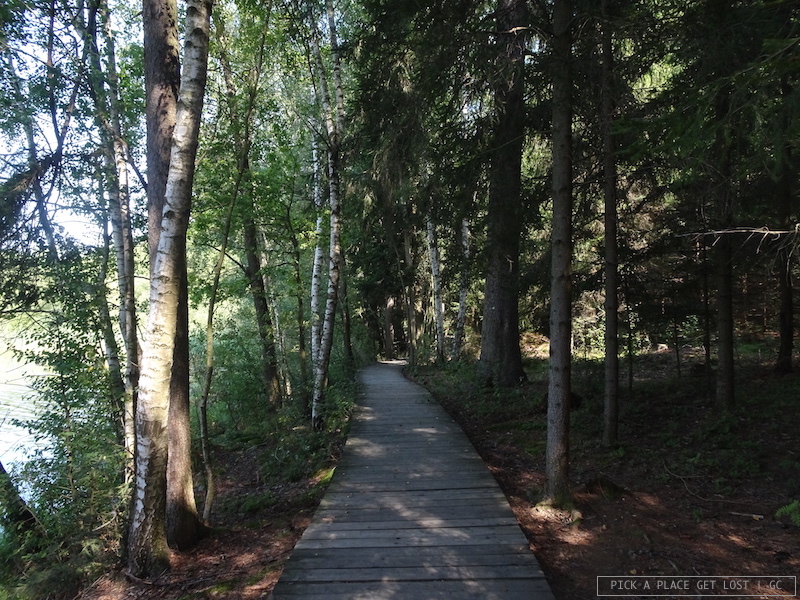 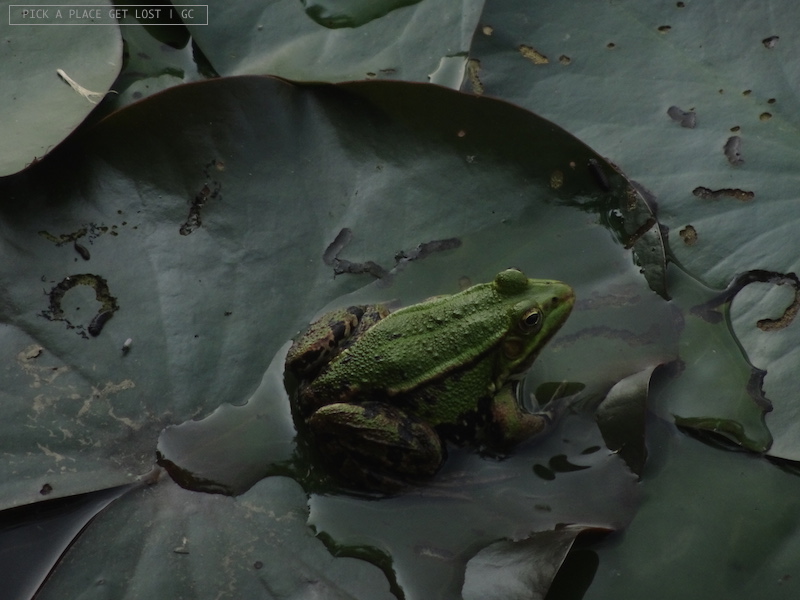 The surroundings, and all that green

Try and Google-map Žďár now. Then zoom out till you see both Žďár and Brno on the map. You will easily notice that Žďár sits at the very edge of a bright green area, which area also happens to be one of the greenest in the whole of the Czech Republic.

In fact, Žďár sits at the edge of a protected area called Chráněná krajinná oblast Žďárské vrchy. It is characterised by a combination of flat areas and meadows, hills, cultivated lands, forests and ponds. Visiting Žďár and leaving without exploring its surroundings would be a shame: the natural scenery seems to form an integral part of the identity of the city itself – or at least, that is the (strong) impression I got as soon as I trotted down the Zelená hora slope behind the church, headed toward one of the ponds at the back. 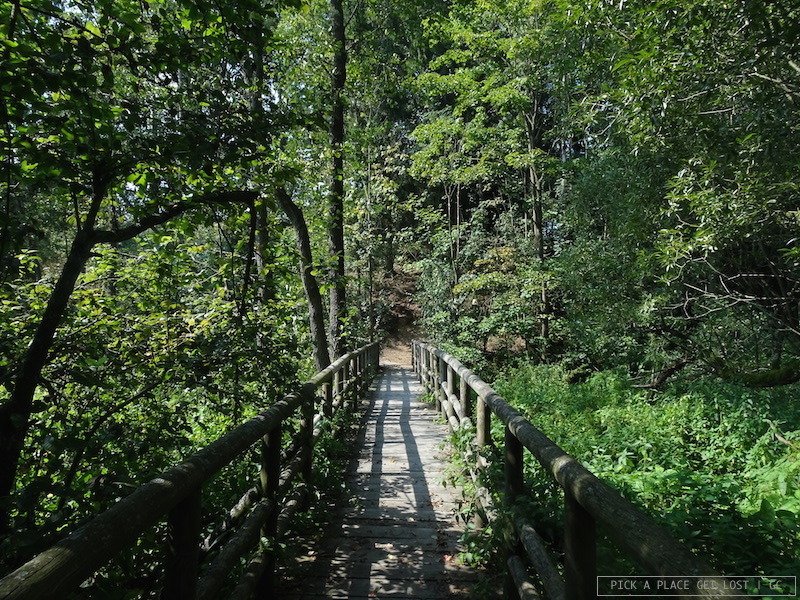 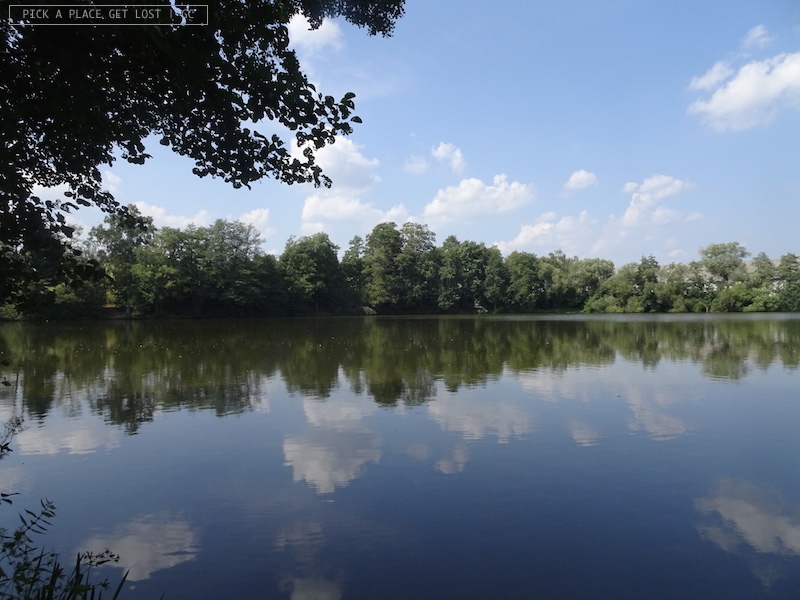 The best way to explore the area is to simply pick a trail and get lost. There are trails running along both ponds (Konventský rybník and Bránský rybník), mostly framed by pine forest, fields, and lovely lake views opening up through the trees when you least expect it.

At the northern edge of Žďár you will also find more places of interest, monuments and cultural venues you might want to check out. These include:

– The Cistercian Monastery, later turned into a castle, and now home to the New Generation Museum (Muzeum nové generace), which offers a permanent collection, exhibitions, events, and rooms for rent.
– The Baroque Bridge, located right between the two ponds and quite unmistakable thanks to the rows of statues of saints decorating its railings.
– the Basilica of Our Lady of the Assumption and St. Nicholas. 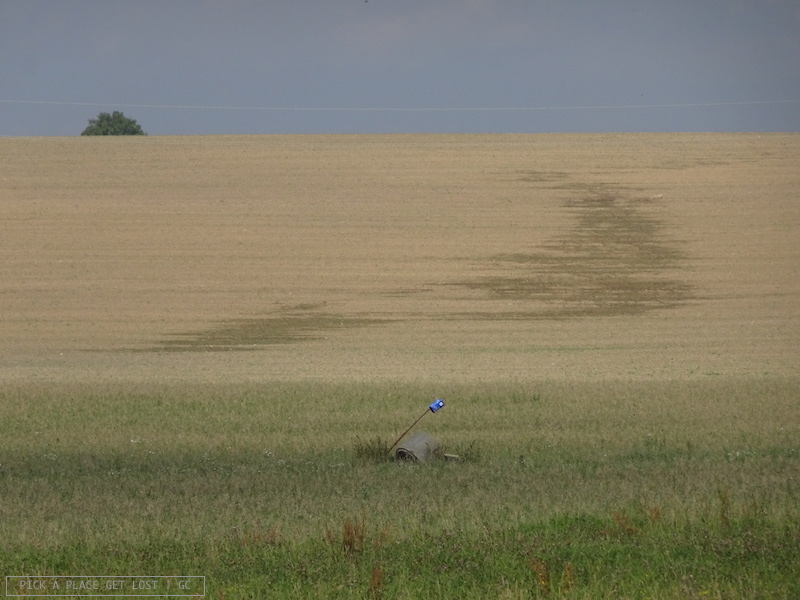 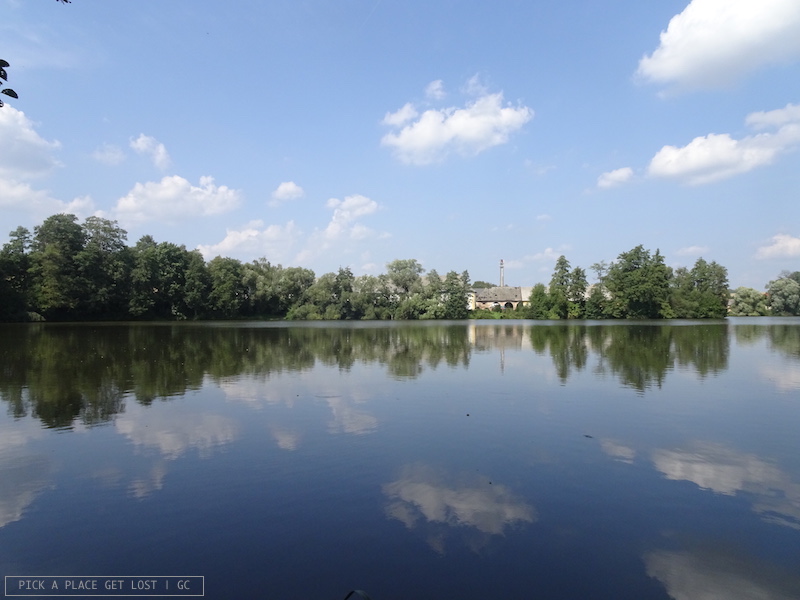 There is more to explore in and outside the city, but my first-time visit came to an end just by the ponds. On my next trip to Žďár I’m planning to explore the forest area that stretches south of the station. That, too, is rich in woods, ponds and, as I was told, yummy mushrooms. Mushroom picking season is almost over, but that should not really be a problem.

Or maybe I might head north of Žďár, and get lost in nature there. Or I might go to Nové Město na Moravě, around 11 km east of Žďár, and still in the Vysočina region. Plenty of options, right?