Chapter 2 of ‘Sensuous Copenhagen’ is all about the soundscape of the Danish capital. Cities are made of sounds, and Copenhagen is no exception.

Cities are made of sounds. They are made of sounds, noises, echoes and silences. Walk down the streets of any city in the world, and you will hear them all: car horns honking in the rush hour traffic, church bells ringing when service begins, footsteps echoing down the underground tunnel, glasses clinking at restaurant tables, and birds chirping in public park alleys.

Copenhagen is no exception, and every building is a soundscape. Of all the places I saw and visited in the Danish capital I’ve picked a few that, as I came across them, I felt had especially close a connection with the sense of hearing.

As with See Copenhagen, all opinions are my own, and my selection is purely subjective, so feel free to disagree, and further comment on that! 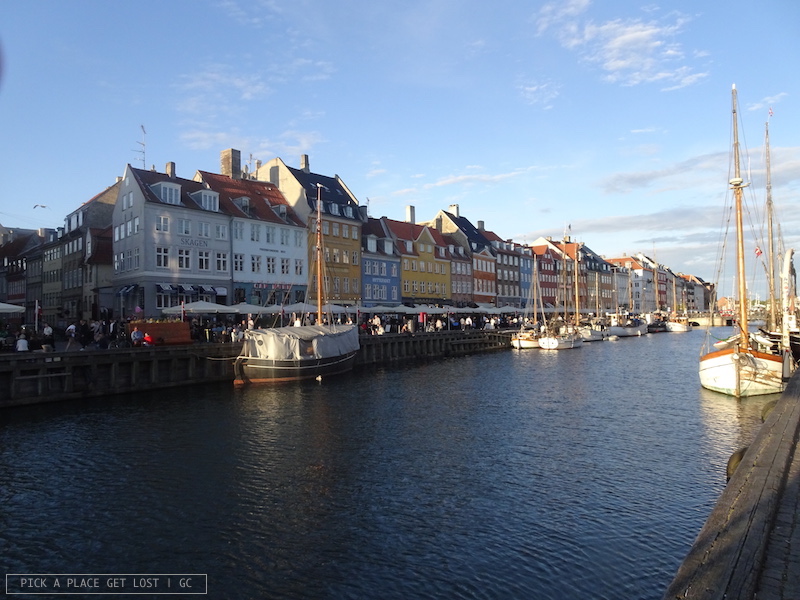 The Black Diamond is a unique, relatively recent addition to Copenhagen waterfront. Opened in the late 1990s as part of the Royal Library, it’s an impressive building covered in shiny black panels, which obviously account for the name it is known by.

The multipurpose complex includes the library, the National Museum of Photography, a bookshop, a restaurant and cafe, and a concert and theatre hall.

The Black Diamond reminded me a lot of Helsinki’s Oodi Library, not so much architecture-wise (the two buildings couldn’t look more different), as in terms of function and use.

As Oodi Library did back then, so The Black Diamond gave me the impression of being both a reading and a living place. It’s one of those places that are experienced by its visitors on a daily basis, so it ‘breathes’ in and out constantly, it inspires the silence of study and research, and it produces all the sounds and noises connected with the broad range of cultural activities it offers. 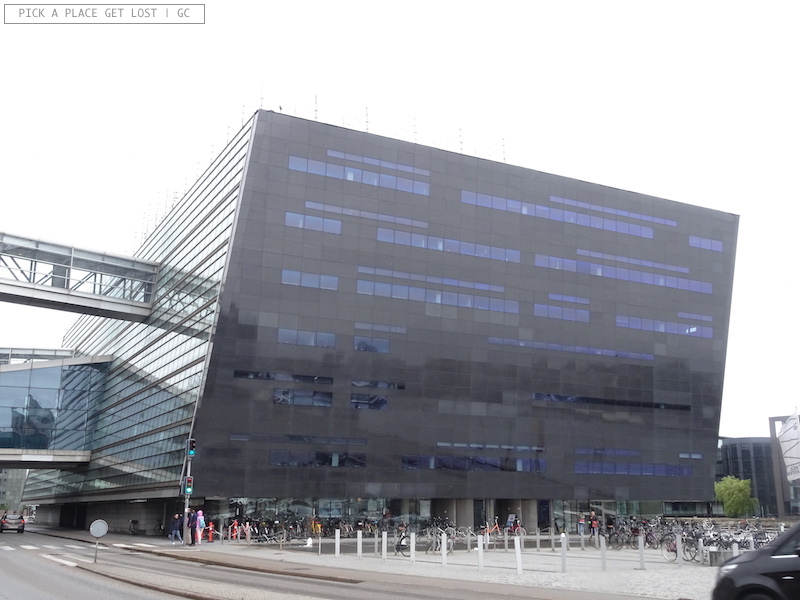 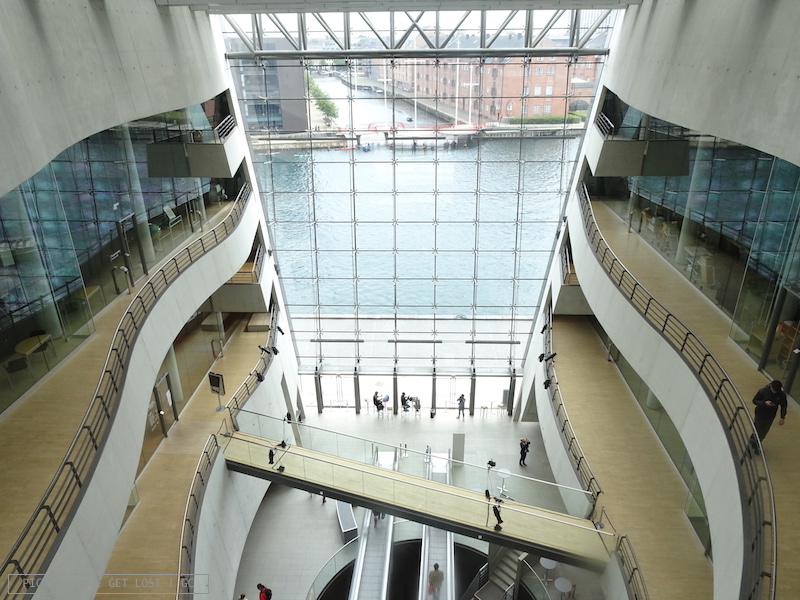 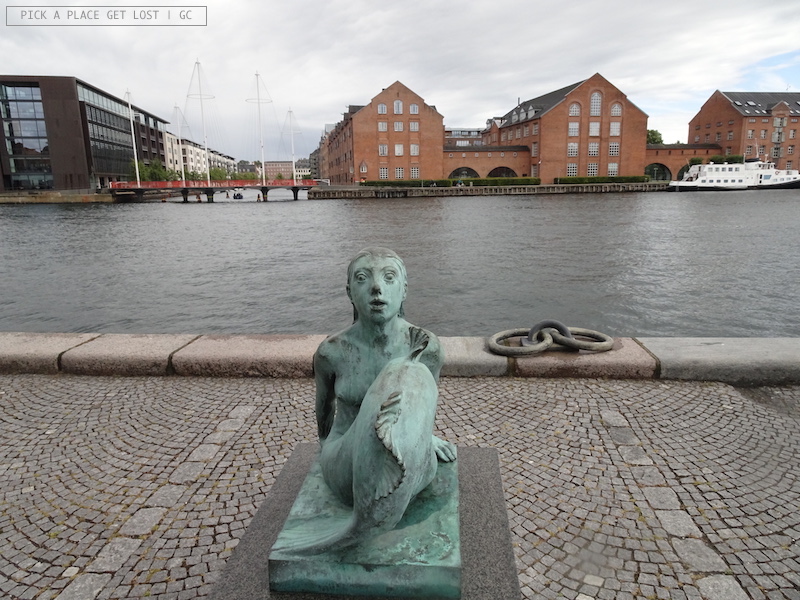 What makes the library even more unique is the view. Take the lift to the viewing spot on the top floor, and take some time to stare out of the glass façade at the back: it’s truly spectacular.

The view is no less lovely from the ground floor. Grab a coffee from the cafe, and sit at one of the tables in the sitting area. The canal and the harbour front make for the perfect backdrop.

Incidentally, the Black Diamond sits in an area of the city where the concentration of cultural venues is especially high. Alongside a number of more ‘conventional’ institutions (museums and libraries), in the vicinity of the Library you also find BLOX.

BLOX is a multi-purpose complex that organises events and initiatives (exhibitions, talks, themed tours, to name a few) with a special focus on architecture, design, and sustainable urban development. BLOX is also home to the Danish Architecture Centre (DAC), which promotes a tighter connection between people and architecture. 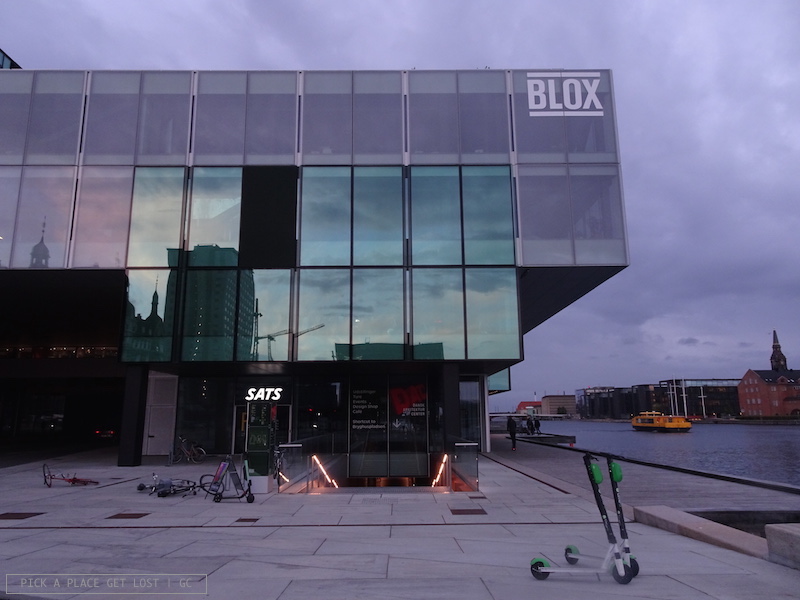 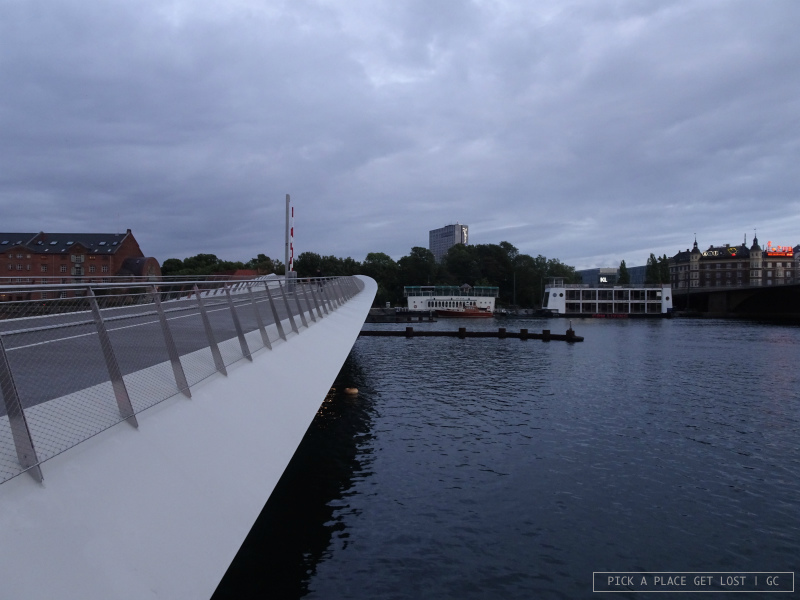 The magnificence of this building is such that you will hardly fail to notice it and, as you come across it, you will realise you’re walking past quite a significant piece of architecture.

The Royal Danish Theatre (Kongelige Teater) is a massive and imposing, yet sumptuous and elegant complex right next door from Nyhavn.

Located on Kongens Nytorv, it easily dominates the whole square. Originally designed as the king’s theatre with public access, it dates back to 1750, and gradually imposed itself as a multidisciplinary theatre specialised in drama, ballet, and concerts.

In fact, the building on Kongens Nytorv is only one in three complexes where the Royal Danish Theatre institution is headquartered, the other two being the Playhouse Theatre and the new Opera House. 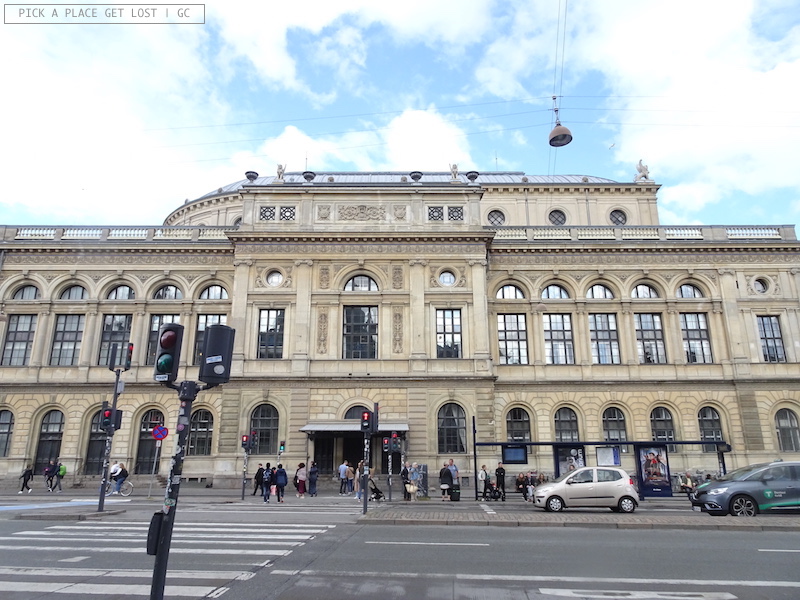 The new Opera House is a (relatively) recent addition to the Copenhagen waterfront skyline, but it’s one that hardly goes unnoticed. It’s airy, light, spacious, and bright – in one word, it’s stunning.

The super modern complex sits right by the sea on Holmen Island. It was erected and opened in the early 2000s, and it is characterised by a large glass front wall wrapped in a metal grill, which means that, if you look at the façade, you glimpse the foyer, but can’t quite make out the interiors.

When we walked past, a play was about to start. The foyer was crowded with opera goers being redirected to their seats, and queuing for the cloakroom, so we couldn’t take a good look around.

I’m not sure it would normally be possible, but if and when I’m back in Copenhagen, I might just go see if that’s allowed. Maybe you can do the same! 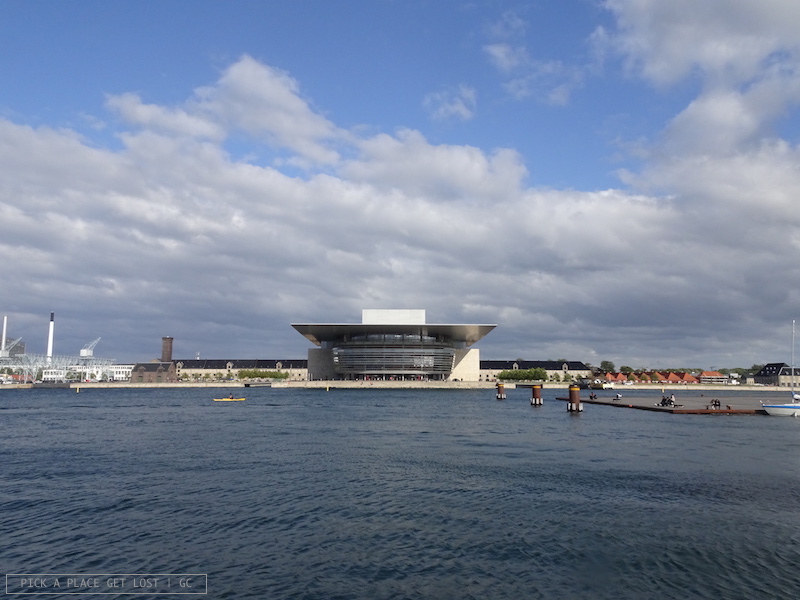 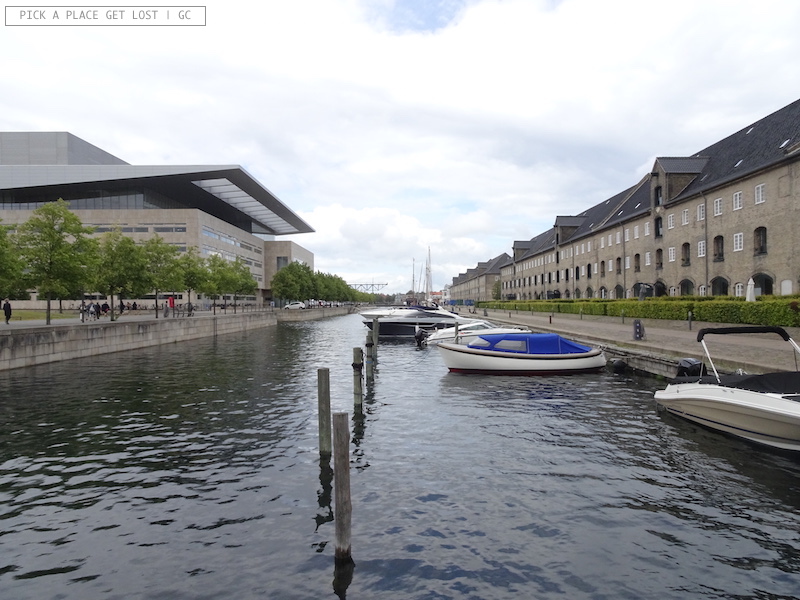 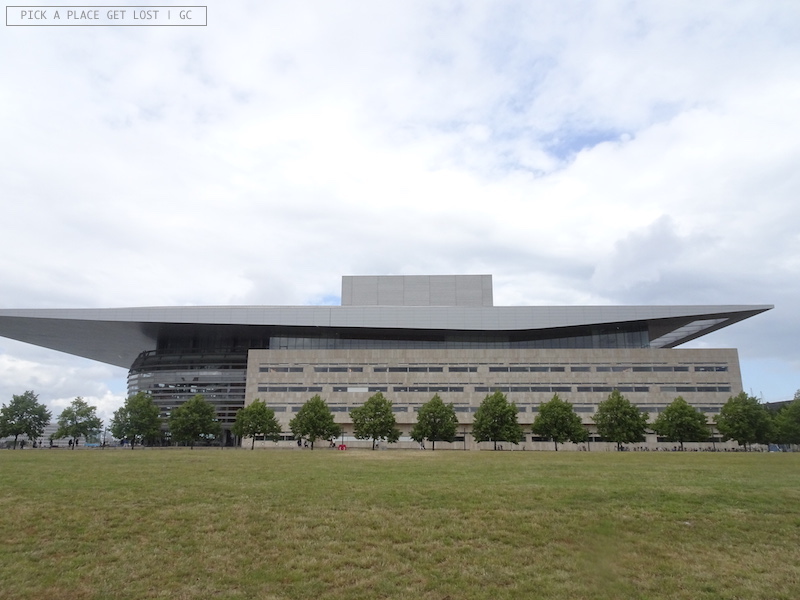 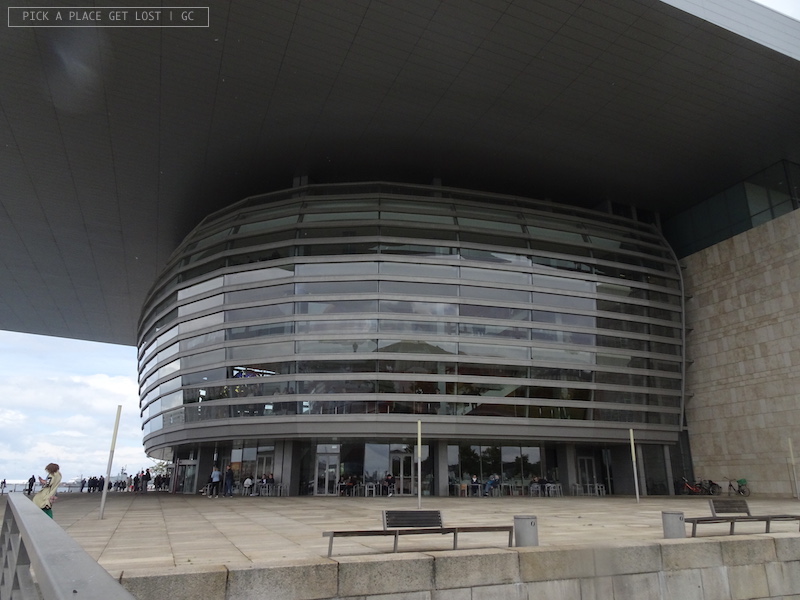 If one had to name the other most popular, most iconic Copenhagen sight, alongside the Little Mermaid, one would be highly likely to mention Nyhavn. Nyhavn can be considered the postcard-like Copenhagen view by definition – and it really is.

Nyhavn is a district and a canal that stretches from Kongens Nytorv to the harbour front. Originally an international commercial port, the area was renovated at a later stage, and look at it now.

Nyhavn is lined up by colourful townhouses built in the 17th and 18th century, of which three (nos. 18, 20 and 67) are the houses where, at different points in his life, Danish author Hans Christian Andersen lived. Needless to say, it’s also dotted with a wealth of restaurants, bars and cafes. 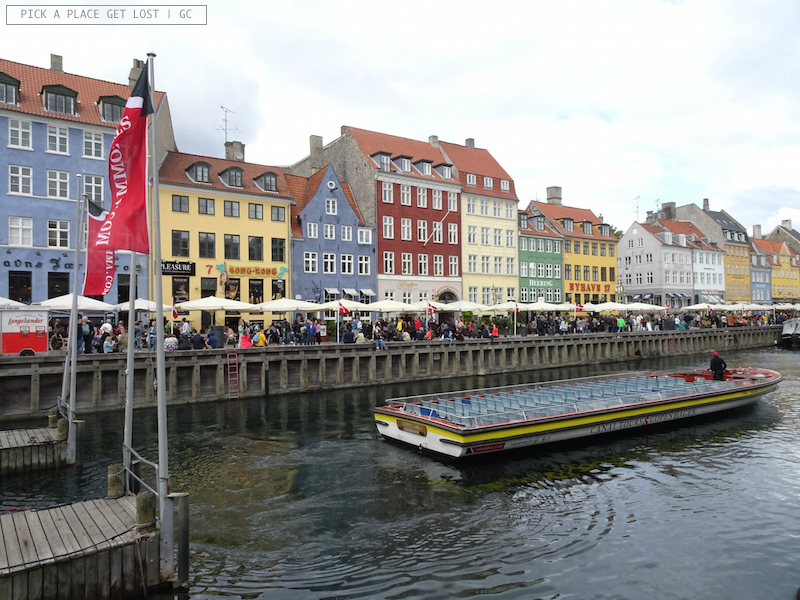 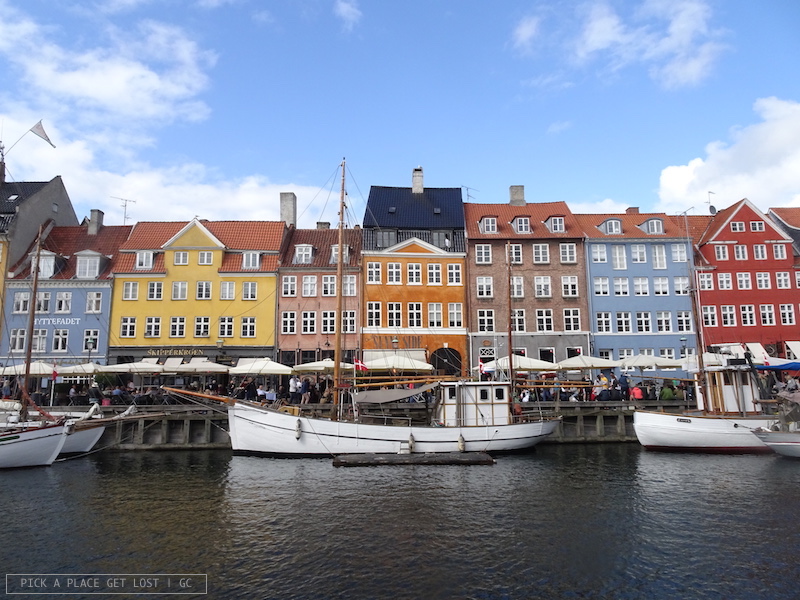 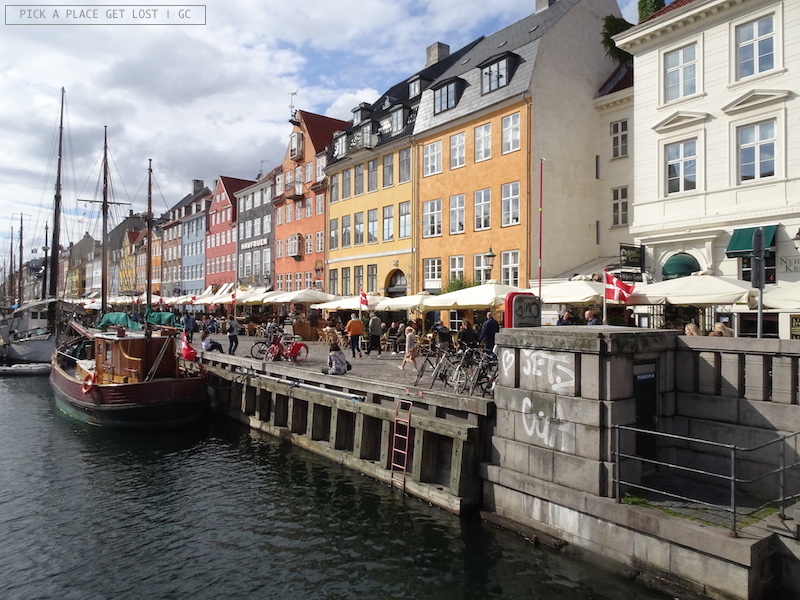 In the case of Nyhavn the most immediate sensorial connection is a visual one: the colourful buildings, the sunlight flooding the harbour, the promenade teeming with tourists and locals alike.

I’ve chosen to match Nyhavn with hearing, though, and I’ve done it because there is a lot to hear as well.

And yet, try and ‘happen’ to walk down the Nyhavn promenade on a summer late afternoon, just when the sun makes to tentatively go down, the light is tinged in gold, and there happens to be a concert going on by the canal, and the people are dancing, cheering, and singing along. And the air is full of sound, music, noise, and the squeaking of seagulls fluttering above the canal.

Just try that once, and chances are you will barely remember what ‘mainstream’ meant in the first place.

Some places are just be experienced as they are. No questions asked. Nyhavn is most definitely one of them. 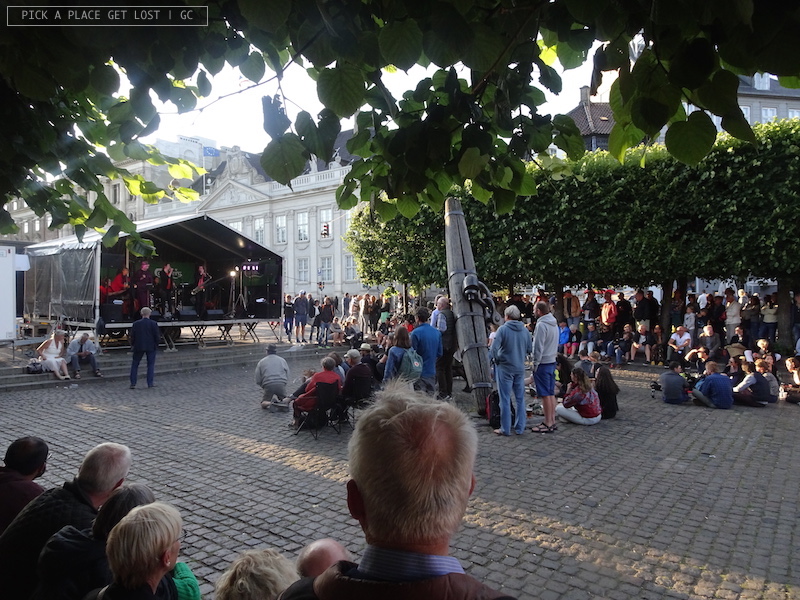 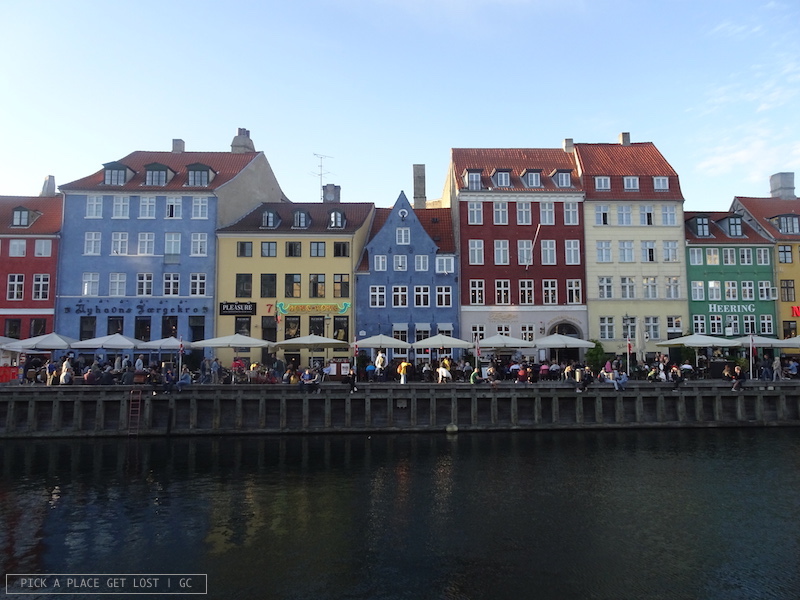 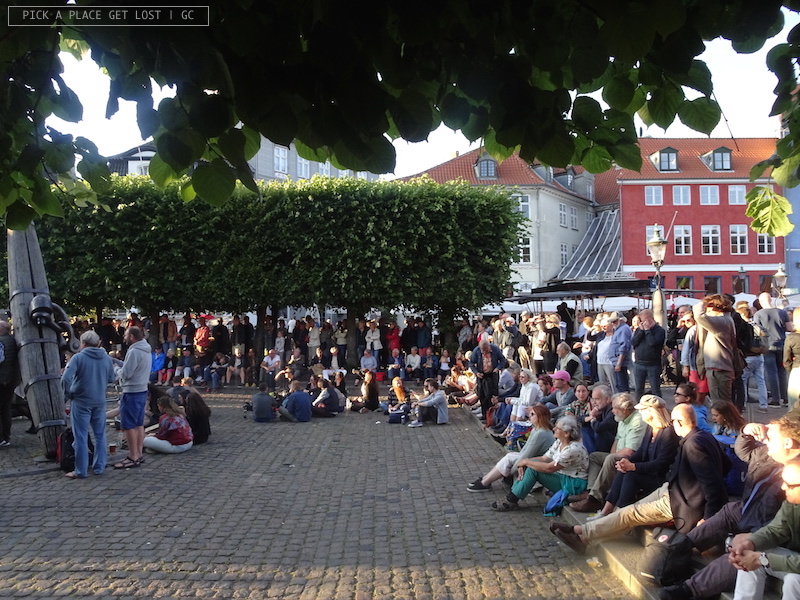 King’s Garden (Kongens Have) is Copenhagen’s oldest park. The park, also known as Rosenborg Garden, dates back to the 17th century, when it was designed and set up as the private garden of Rosenborg Castle, which in turn had been erected by King Christian IV as a country summerhouse in the early 1600s.

The park is dotted with a number of landmarks in addition to the castle: Rosenborg barracks, the Commandant’s House, and a number of pavilions.

Depending on the time of the day, as you amble its leafy alleys you’re likely to hear the music of this or that concert taking place somewhere in the park, or the noise of the wind rustling through the trees. 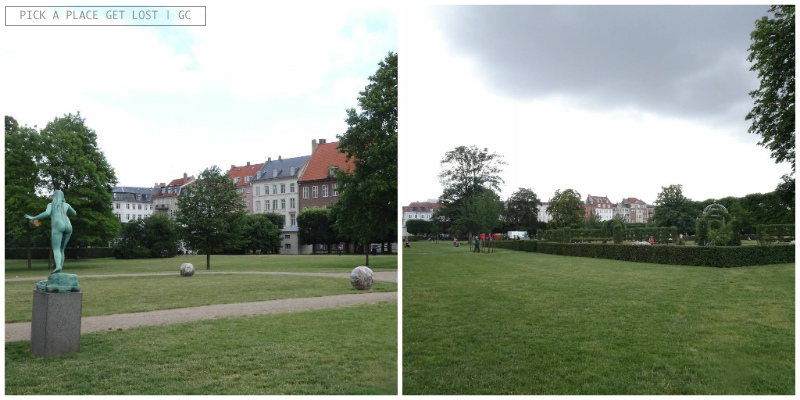 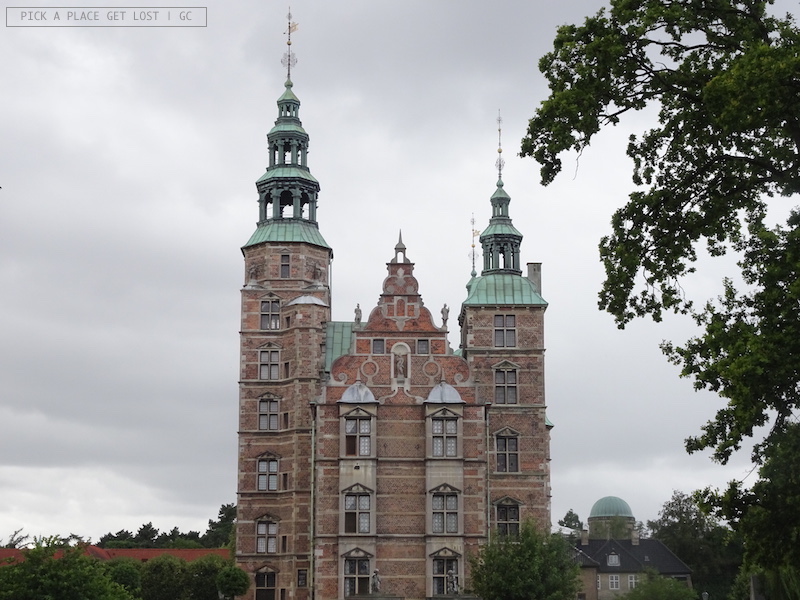 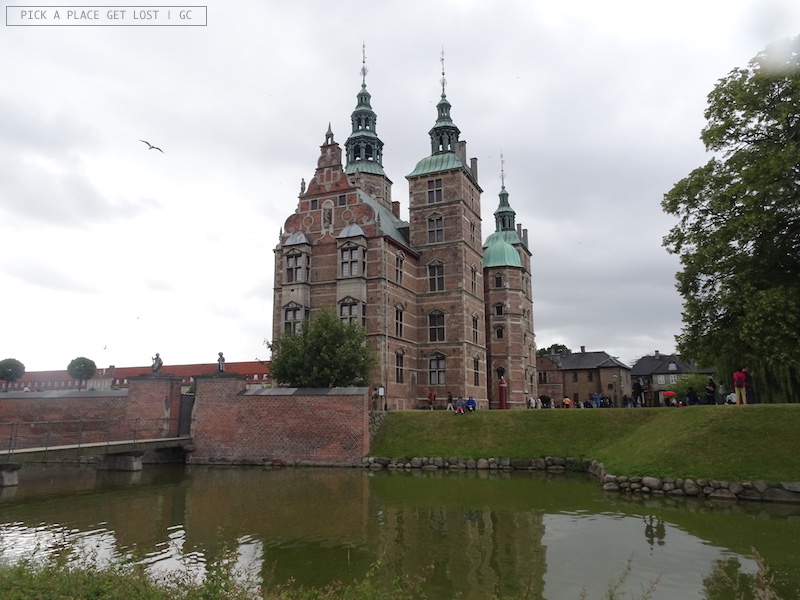 Tivoli amusement park is one of the most popular attractions in Copenhagen, and that’s a fact. It is especially popular with tourists, and it’s easy to understand why.

There’s the location, in the very heart of the city centre, near the City Hall and the main train station. There’s the lively vibe, paired with the diverse nature of the attractions of the park. There’s also the uniqueness of the site itself: Tivoli is the second-oldest, still operating amusement park in the world.

If you walk past the Tivoli area, you will most likely hear the screams and shrieks of the park goers trying the most extreme attractions the park offers.

We did not go to Tivoli, so I cannot contribute my opinion here. We only saw it from the outside, which is very easy. There are multiple entrances to the park, and if you walk past the one on Vesterbrogade, you will easily catch a glimpse of the main alley, and the top of the tower attraction at its end.

I usually try to avoid hyper touristy spots (unless I have a genuine interest in them) and, I have to say, I was not that interested in Tivoli.

Thanks to our Polish friend, we had learnt about Dyrebakken amusement park near Klampenborg (north of Copenhagen), the oldest, still operating amusement park in the world. We had already planned to head there on a day trip outside the capital. The beach was very close, and there was a lot to see in the area.

These factors, alongside the fact that Tivoli was too expensive by our standards (you pay for the entrance and for the rides on top of that), explain why we skipped it altogether.

So I will be writing about Dyrebakken (in one of the next Copenhagen posts), and maybe you can tell me about Tivoli if you have indeed been there! 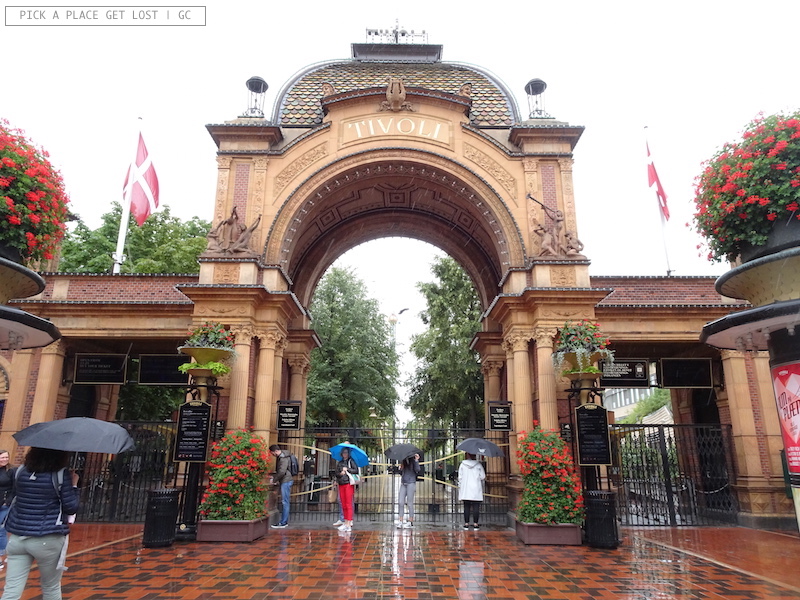 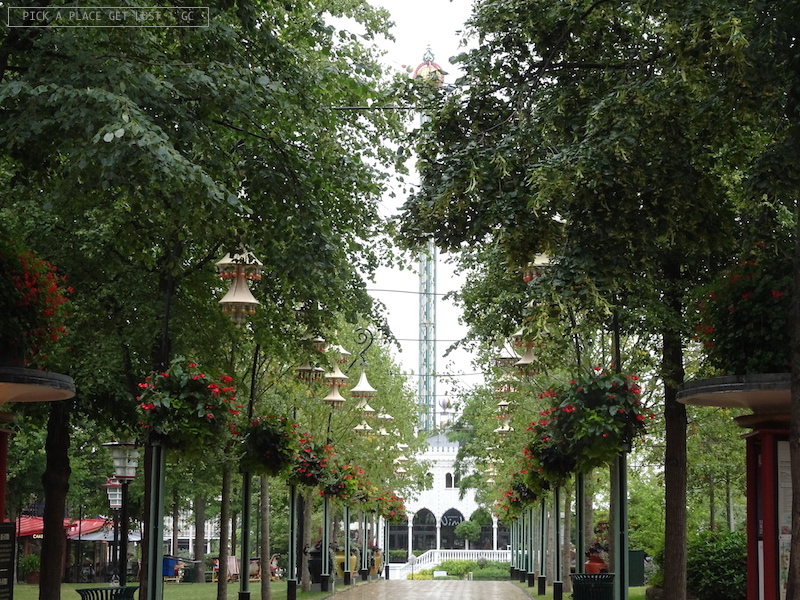 Strøget is Copenhagen’s high street by definition. It cuts through the heart of the city centre and, together with countless side streets and narrow alleys, it forms quite a tight bundle in the fabric of the city.

It is loud and crowded at all times (except early on weekend mornings), and it’s a major touristy spot.

So let yourself be tempted to head off the main street as often as you want, for at least two reasons: 1) you will find your way back to Strøget anyway, so you won’t get lost, and 2) you will stumble upon a number of less visible, but equally cool spots. 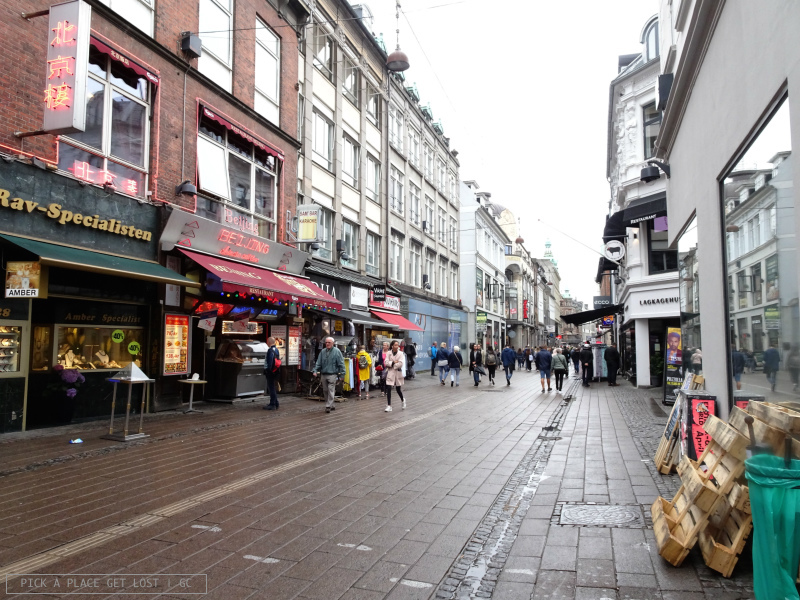 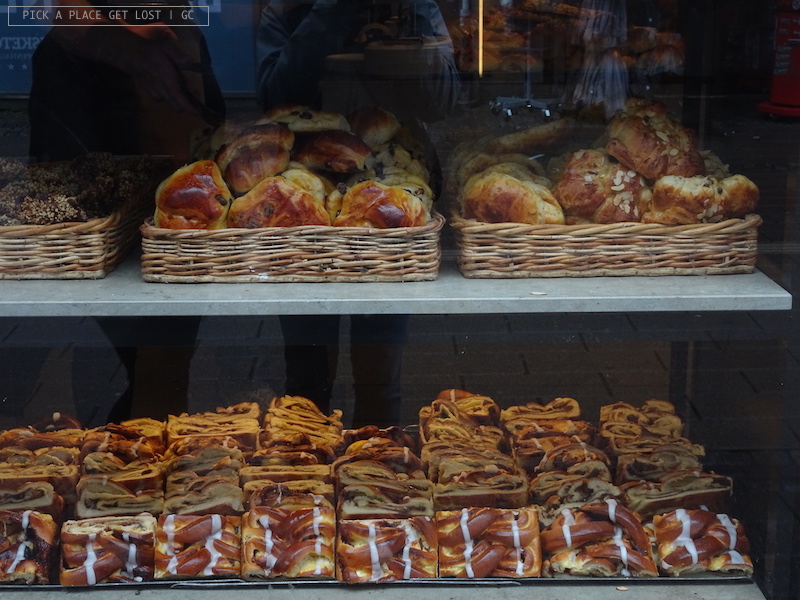 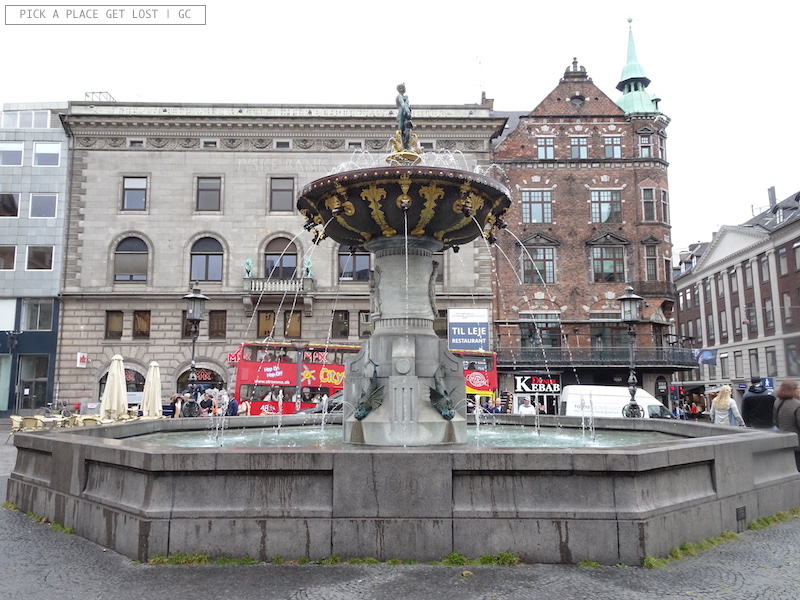 Now it’s your turn to go and explore the soundscape of the Danish capital. The next post, Feel Copenhagen, is already on the way!