Chapter 1 of ‘Sensuous Copenhagen’, aka talking about Copenhagen through the five senses. The first is sight, so let’s go and See Copenhagen, to begin with!

I liked virtually everything about my Denmark trip. At a personal level, even the landing itself I found exciting. Twice I had landed in Copenhagen before, and both times It was only to travel on to a final destination like Stavanger or the Faroe Islands.

So this time it was great to land in Copenhagen, head straight for the city centre, and explore the Danish capital for two whole days.

In the previous post I mentioned that I didn’t quite know how I’d be writing about Copenhagen, but in the end it was the city itself that helped me with that.

On my first day in the city I came across the phrase ‘Sensuous Copenhagen’ twice. The first time was when I saw an art project displayed at the City Hall. People from all over the world living in Copenhagen shared notes where they voiced their feelings about the city. One of the contributors called it ‘sensuous’.

A few hours later, I read the same expression in the feedback given by one of the participants in the ongoing art project by Marina Abramovič at the Royal Danish Library (aka Black Diamond). 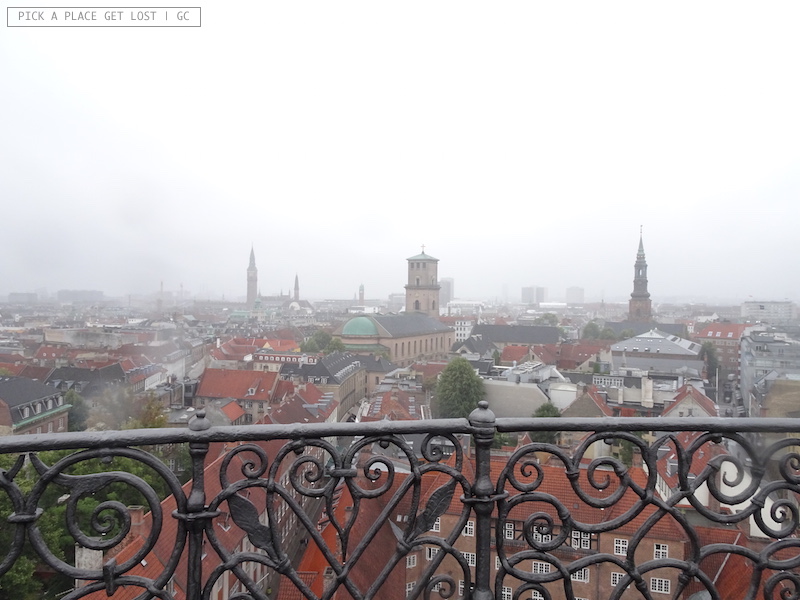 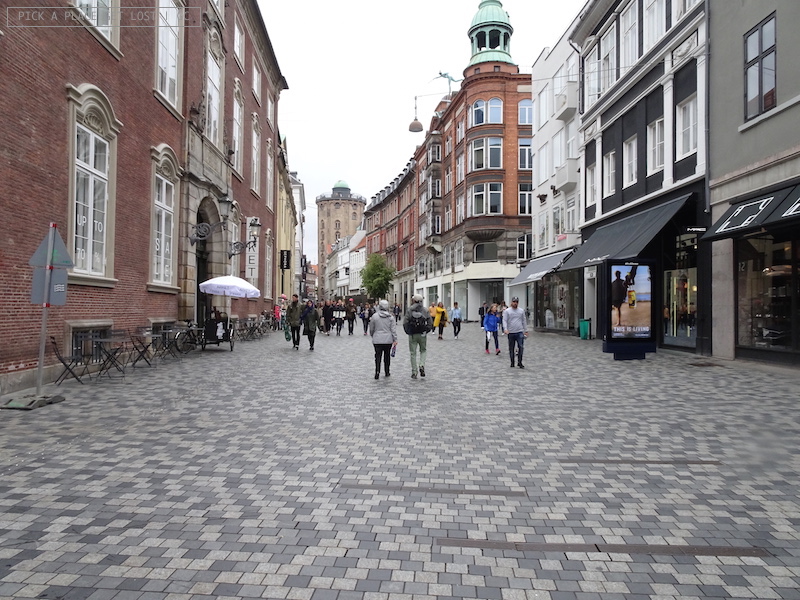 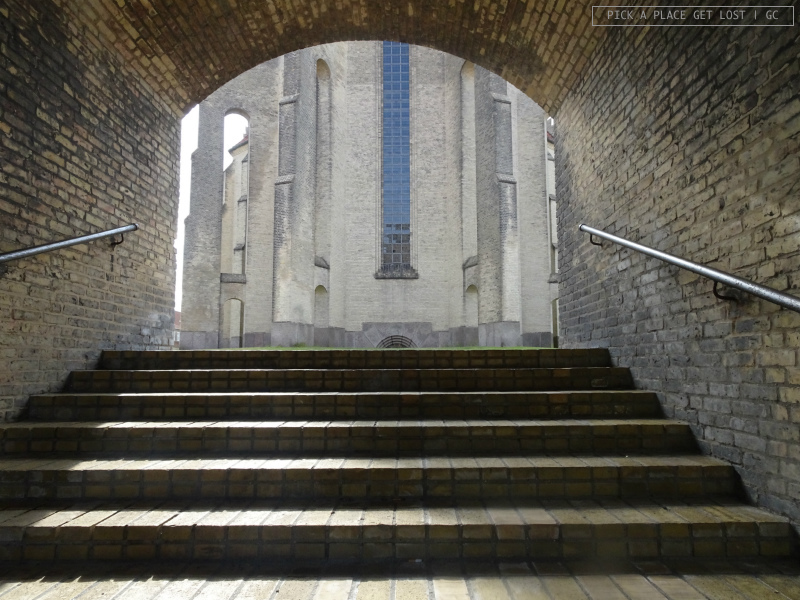 So when I had to come up with a way to write about Copenhagen without sounding obvious or predictable, the word ‘sensuous’ sprang back to mind. And it felt right.

I haven’t put together a walking tour this time, nor have I made a listicle of top sights. I’ll be talking about Copenhagen through the five senses.

First, I’ve identified recurrent categories of places of interest: architecture, water, and ‘green zone’ (plus a few extras). Then, for each of the five senses I’ve tried to identify places or monuments or ‘things’ that belong to each of the categories above.

I won’t be talking about all categories for all senses: if it’s not relevant, or I’ve got nothing to say about it, I will just not mention it.

Needless to say, my overview is not a comprehensive one, nor does it aim to be one. There is only so much even the keenest, most indefatigable walker can get to see and visit over the course of two days in Copenhagen!

Also, of course my suggestions are subjective. I do my best not to let subjectivity take over my posts, but when it comes to the sensorial perception of a city, objectivity is even harder than usual to achieve. So when I chose the individual entries of each category, I followed a purely subjective criterion. Feel free to disagree, and feel free to let me know!

Enough with the intro. Let’s go and See Copenhagen now! 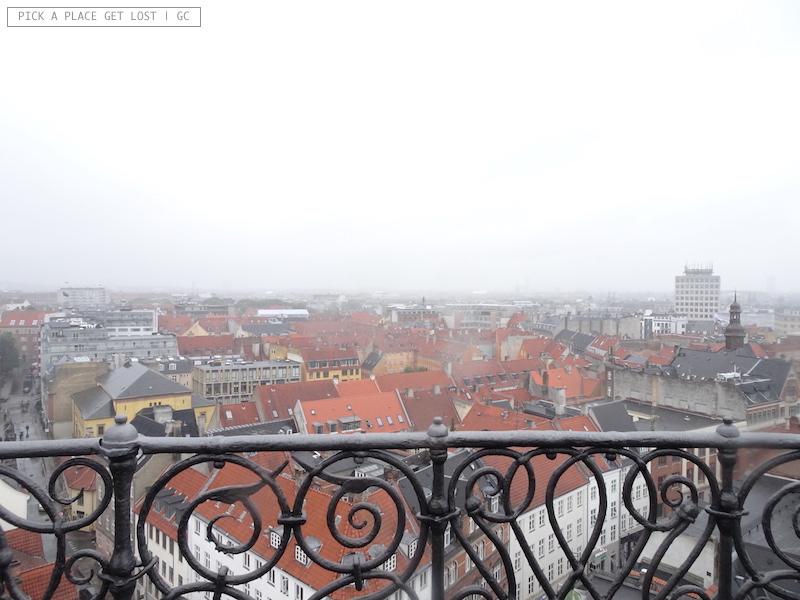 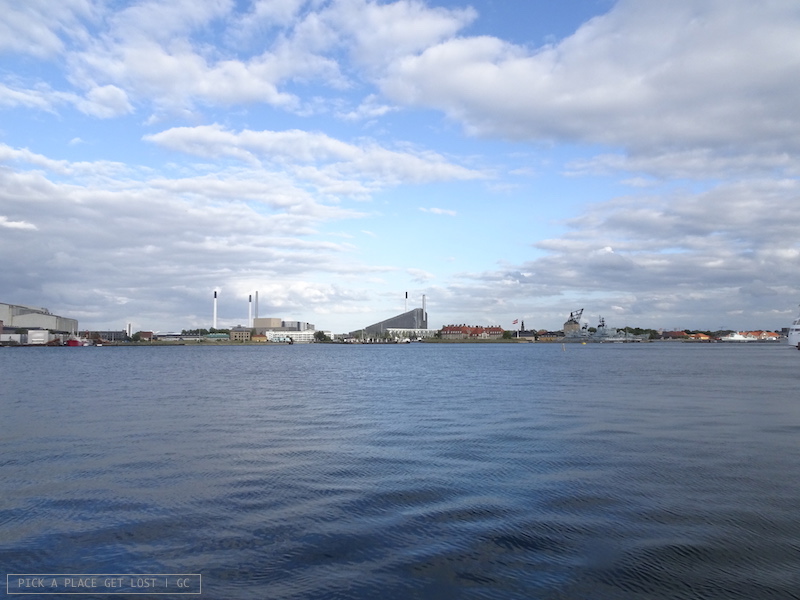 Rundetårn is both a must-see and the literal application of the notion of ‘see Copenhagen’. True, you can enjoy stunning views of the Danish capital from multiple privileged viewing spots. Rundetårn, though, makes for a spectacular bird’s eye view of the city.

Built in the 18th century for astronomical research purposes, the Round Tower is the oldest still functioning observatory in Europe. Located on Købmagergade, in the heart of the city centre, it is part of the Trinity Church complex.

The interiors are much more spacious than it looks from the outside. A spiral walkway runs through the tower all the way to the top. Key stops along the way include the library hall and the floating glass floor. The former is home to temporary exhibitions, while the latter is a narrow arch in the wall where, if you step through it, you will stand on a round glass platform suspended 25 metres above the ground. You can see the tower’s core from there (so exciting!) – but you might want to avoid standing there if you’re afraid of heights.

The outdoor platform at the top will deliver a breathtaking view all over the city, especially if you happen to be up there on a bright day (i.e. not the kind of day I had when I was there – but even under a blanket of clouds it had its charm nonetheless).

As you walk around the platform, you might also notice a small door, which takes you up to the observatory. 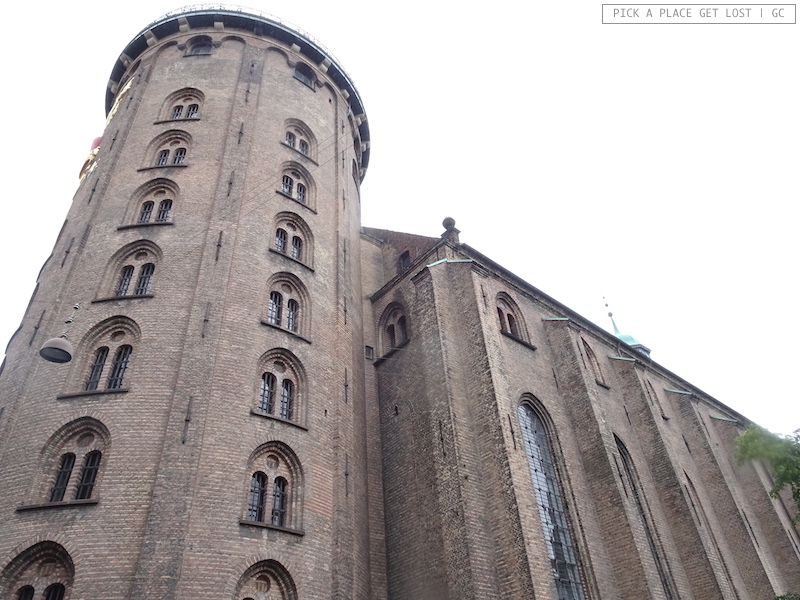 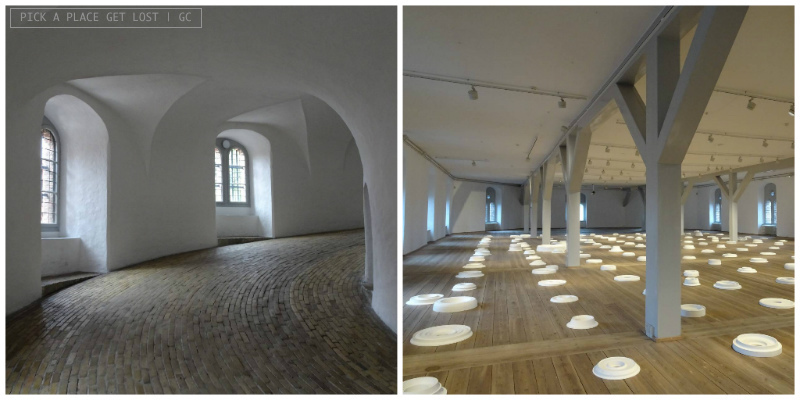 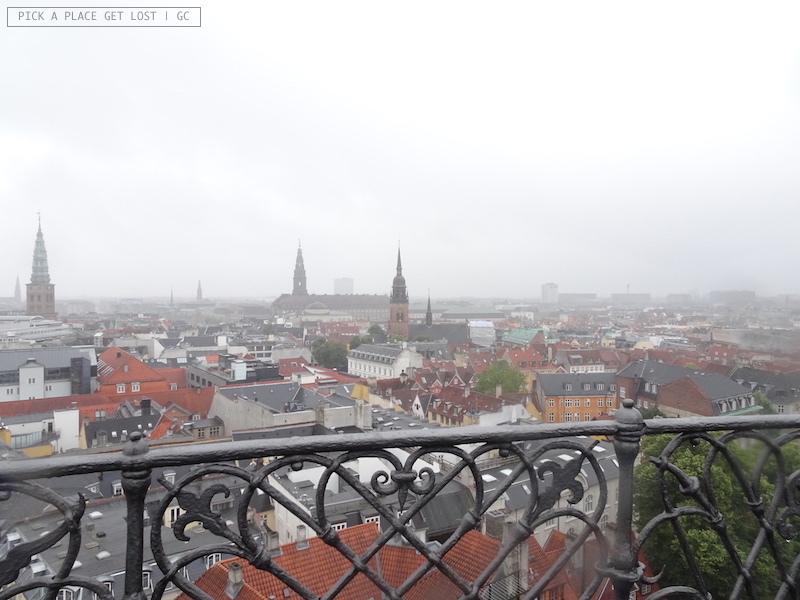 Langelinie and the Little Mermaids

This one’s another must-see area and a highly scenic urban walk. The word Langelinie itself might not say much to you, but if I say Little Mermaid, recognition will dawn instantly.

Yes, because Langelinie (literally ‘Long Line’) is a quay, a promenade and a park, and it’s also home to the most iconic, mainstream Copenhagen monument of all, the Little Mermaid (Den Lille Havfrue).

Once you’ve crossed through the small park, you can walk down the quay, which offers a lovely view of the Amager Island waterfront and some of its key sights (e.g. Amager Bakke, Mastekranen old crane, and the ship called Peder Skram).

You will also find the Little Mermaid spot along the way. You hear a lot about the Little Mermaid from anyone that has been to Copenhagen, and the most recurrent remark you hear on the subject is: ‘The statue is so small! So much smaller than you might think or expect’.

Maybe hearing that kind of feedback multiple times reduced my expectations to the point that, when I saw it, I actually liked it a lot.

The sculpture (which is objectively small, yet larger than I thought!) sits on a rock just off the seashore in a super scenic spot. Of course, it was surrounded by a crowd of people, either taking selfies or mimicking its pose, or struggling to do both things at the same time. How peaceful that spot must be when the crowd is not around, I thought. 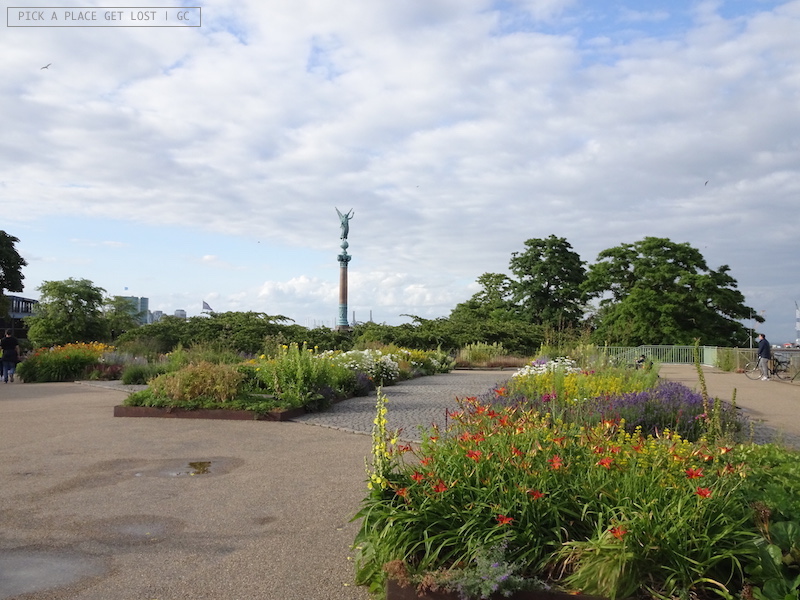 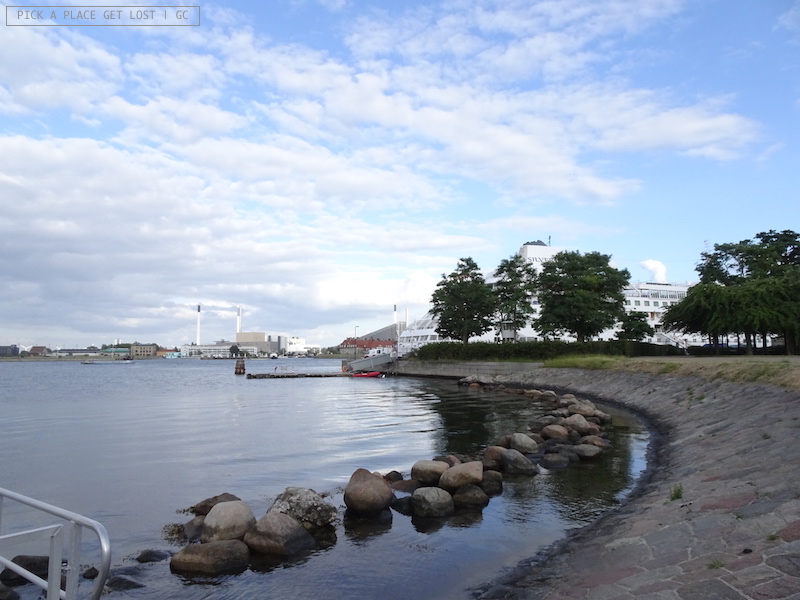 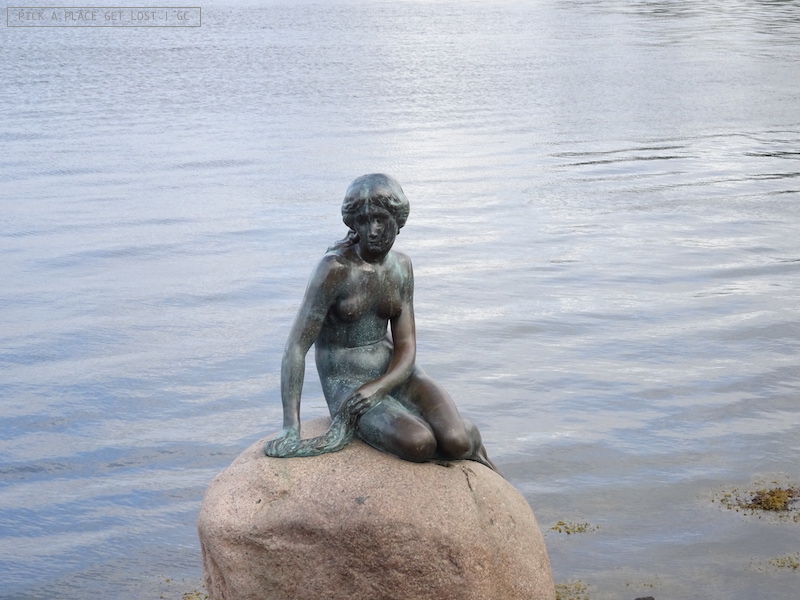 Once you’re done with that Little Mermaid, you want to keep walking down the seafront. Langelinie does not end there. There are at least two more spots you don’t want to miss.

One is the Marina Harbour, which is located only a bit further on, and relieves you from the hustle-and-bustle that surrounds the mermaid spot.

The other one is… the other Little Mermaid. The Genetically Modified Little Mermaid sits in the waters of a residential area of Langelinie on the northern side of the peninsula, alongside other contemporary art sculptures.

It kind of looks like the ‘regular’ Little Mermaid: it’s a female character, it sits on a rock, it looks deep in thought. Unlike its institutional counterpart, though, it has random limbs all over the place.

It’s funny, it’s provocative, it’s (a little) grotesque and, well, it’s obviously highly desecrating. When it’s about such iconic monuments as the Little Mermaid, it’s even too easy to ‘mock’ it this way. If you ask me, of course I find it a brilliant idea. Go see for yourself. 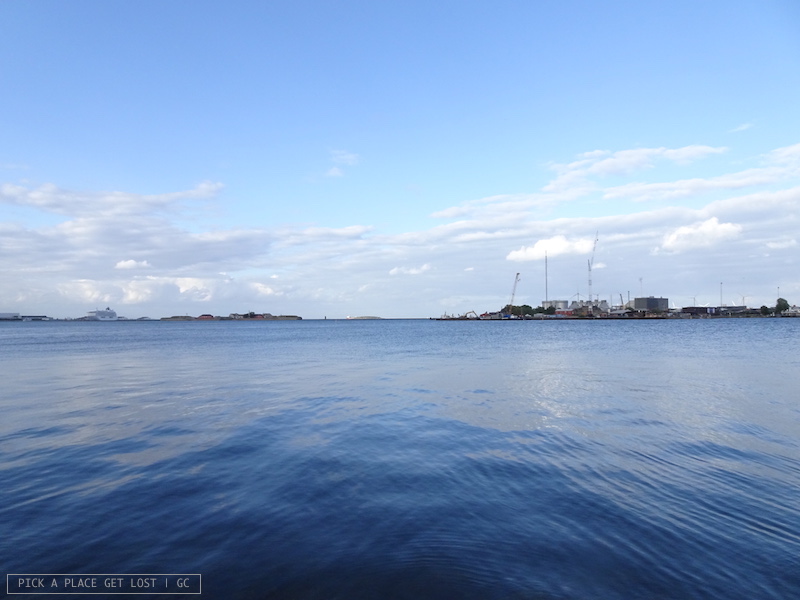 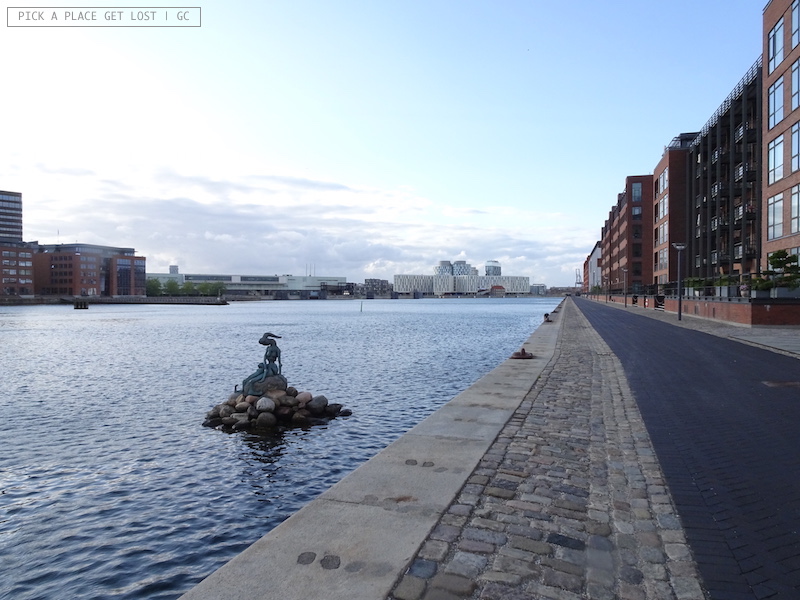 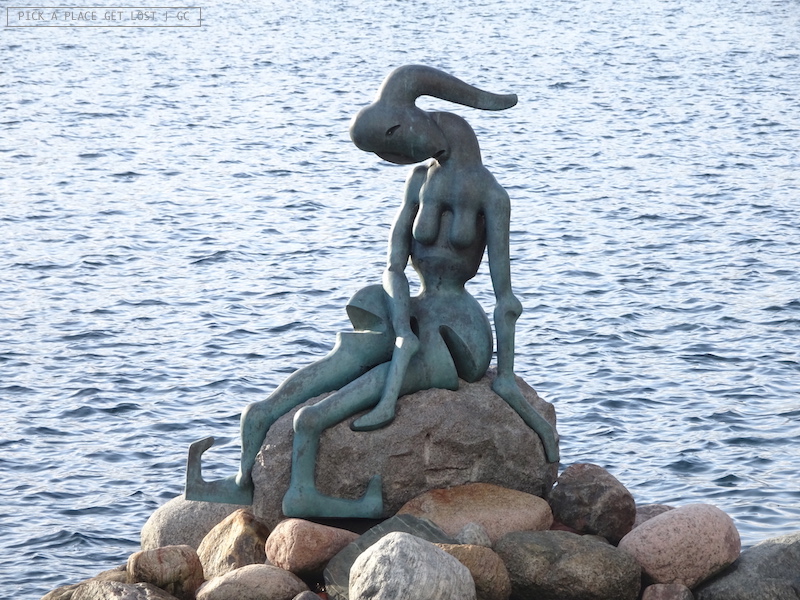 Anyone going to see the Little Mermaid is highly likely to detour in Kastellet before or after seeing the statue.

Kastellet is one of the best preserved fortresses in Northern Europe. Its unmistakable pentagon shape is close to a perfect five-pointed star, which makes it very easily recognisable on the Copenhagen map.

The complex has been renovated multiple times over the course of three centuries, and it is home to a number of monuments and sites of interest (e.g. the bastions, several military buildings, a windmill, amongst others). While it still belongs to the Danish Defence Ministry, today Kastellet mainly serves the functions of a public park and a historic site.

If you walk past Kastellet on your way to the Little Mermaid, chances are that you will come across the Gefion Fountain along the way. The large fountain sits right between Kastellet and the waterfront. Water flows down multiple basins, while at its top Norse goddess Gefjun is portrayed as she drives a cart drawn by four oxen (her sons, turned into animals by the King of Sweden). The fountain tells the myth of the foundation of the island of Zealand, on which Copenhagen itself is partly located. 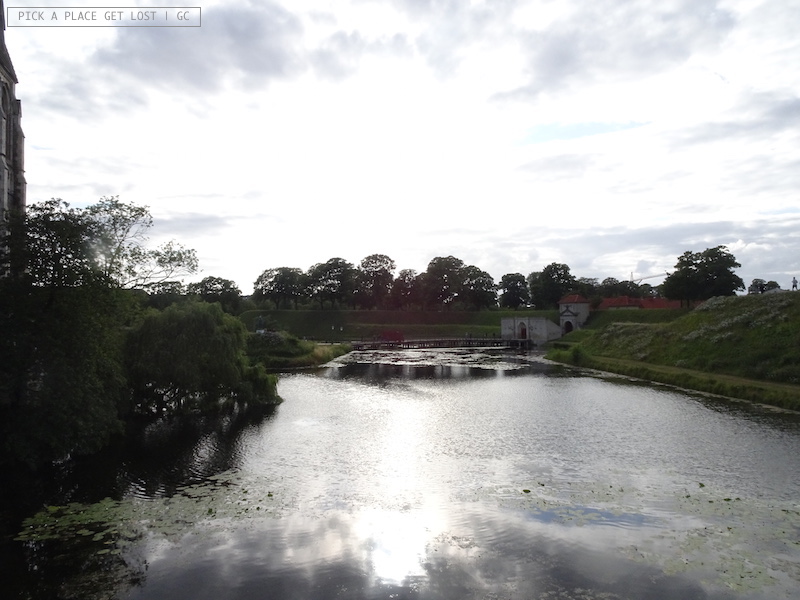 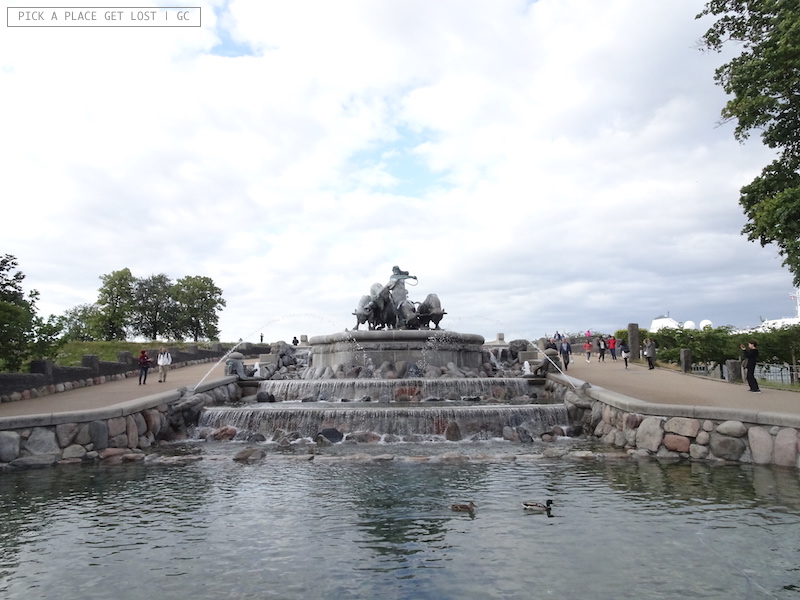 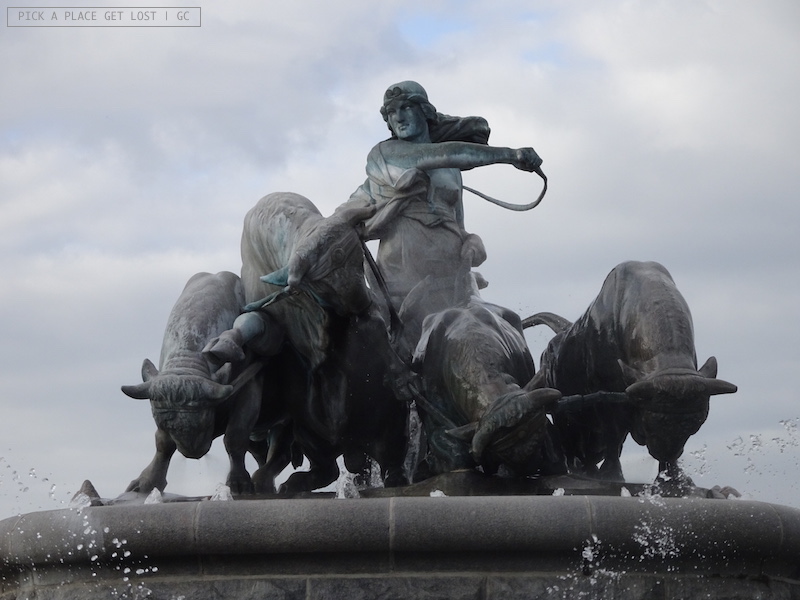 This one could easily fall into the ‘Feel Copenhagen’ category, so palpable is its tactile quality. However, it is also quite a unique sight, and that makes it equally fitting as part of the ‘See Copenhagen’ chapter.

In terms of location, it hardly gets more off-the-beaten-track than this. You can get there either by public transport or on foot. If you choose the former, you can take the local train (line B) from the Central Station (you get off at Emdrup St, and it’s a short walk from there), bus 66 or bus 6A.

If you choose the latter (as we did), be ready for a long walk, one of those that take you through the Copenhagen where locals live, nothing like the fancy, touristy routes, but the real, ordinary one. I love these walks.

Grundvigs Kirche is a next-to-unique example of Expressionist architecture with Gothic interiors. Of the church complex, it’s the façade that will leave you breathless. We were in genuine awe of the building, and for a good ten minutes or so we did not say a word, so mesmerised we both were as we struggled to embrace the decorative pattern of the façade in its entirely. 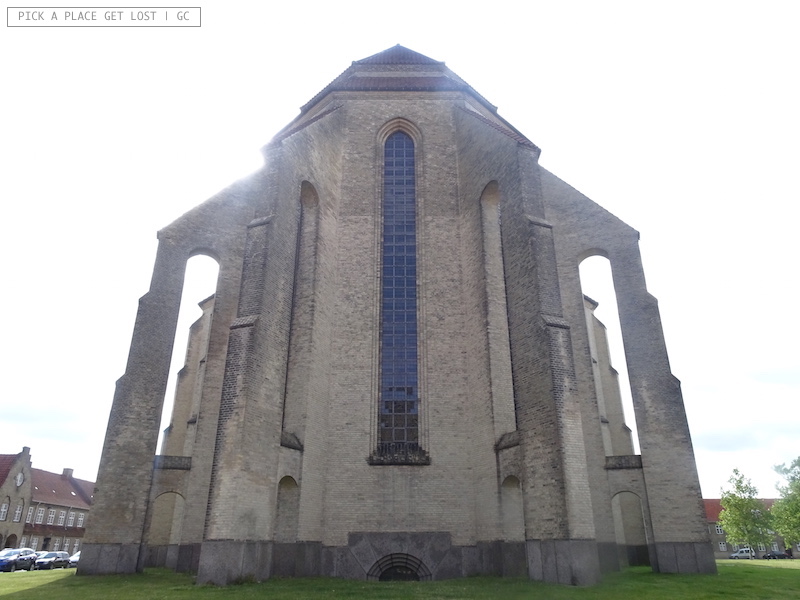 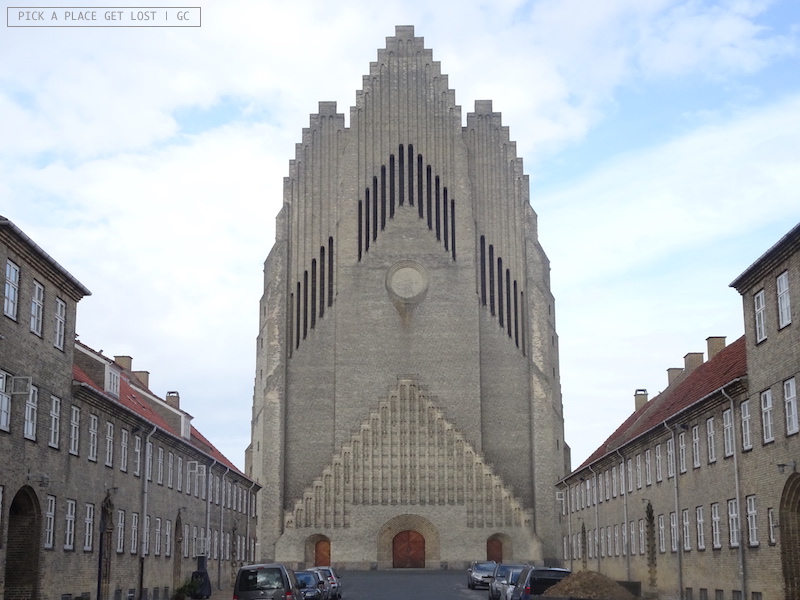 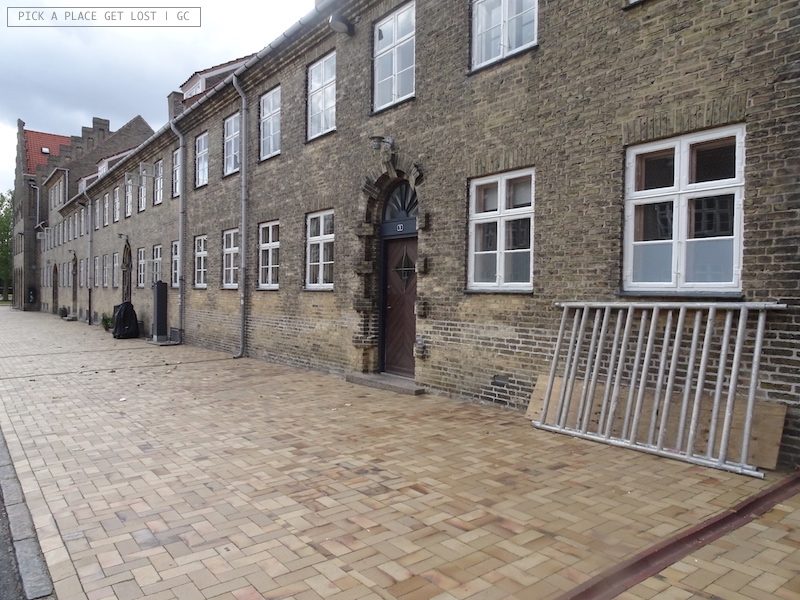 The church has an austere look, partly due to the perfectly symmetrical geometry of its structure and decoration. Yet the very decoration also retains a somewhat dynamic feel to it, which seems to irradiate across the church surroundings. As you will notice, the residential complexes on both sides of and behind Grundvigs Kirche display a very similar decorative style, only in a more simplified pattern.

What is more, when we were there there was literally no one around. Such complete silence gave the church an even more solemn connotation, but also made the overall atmosphere slightly eerie in the ‘Black Mirror’ meaning of the word.

Grundvigs Kirche was worth the long walk in so many ways. 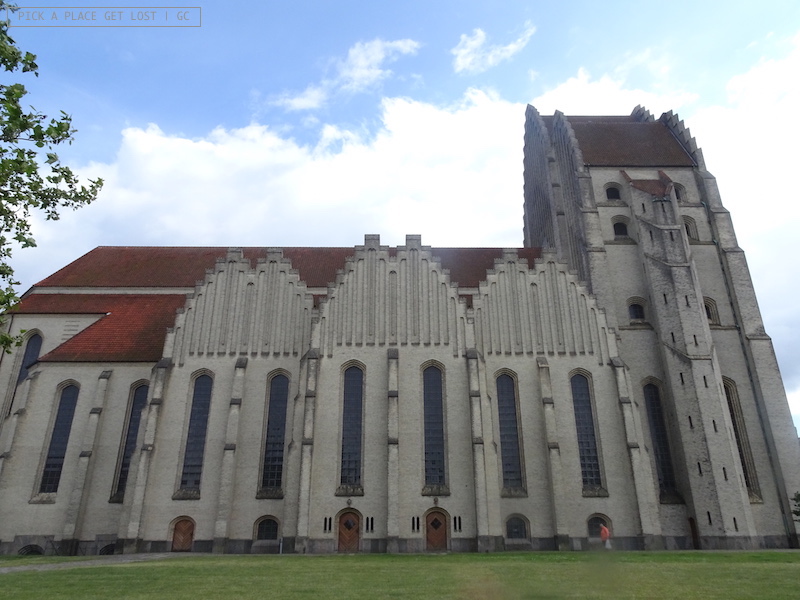 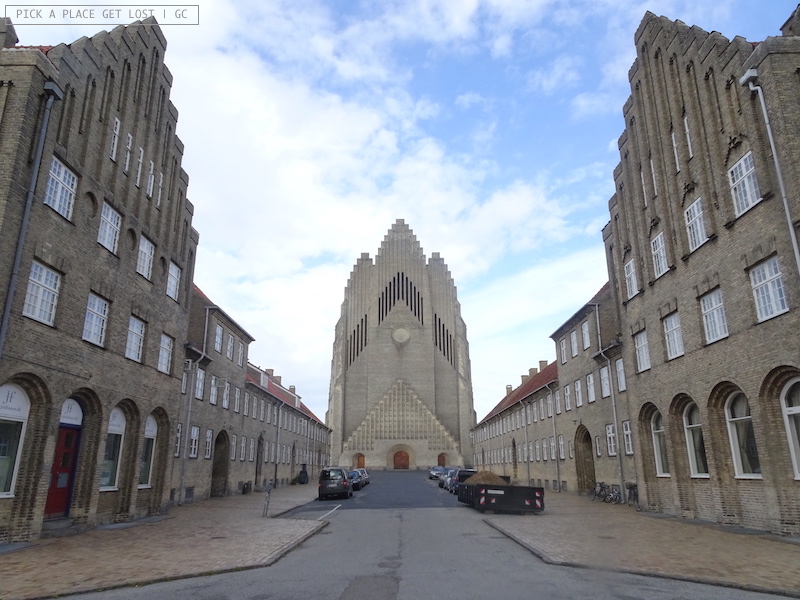 I’m leaving this one as ‘extra’ entry only, because chances are that you will come across it anyway, but won’t be able to tell what it is just by looking at it.

I’ll tell you what it is: it’s a rare, if not unique delight for the eye.

The Old Stock Exchange building is one of the oldest buildings in the whole of Copenhagen. Built in the early 17th century, it is located close to Thorvaldsen Museum, Christiansborg Palace, and the Royal Danish Library.

You might glimpse it from afar while you’re walking down the seafront, or you might choose to get close to it, and appreciate the full extent of its stunning architecture. Whichever the case, you might find it hard to look away until you’ve run your eyes all along the outline of the complex, its ornate façade and, obviously, the strikingly tall spire in the middle of the building. Only then will you be content to leave. 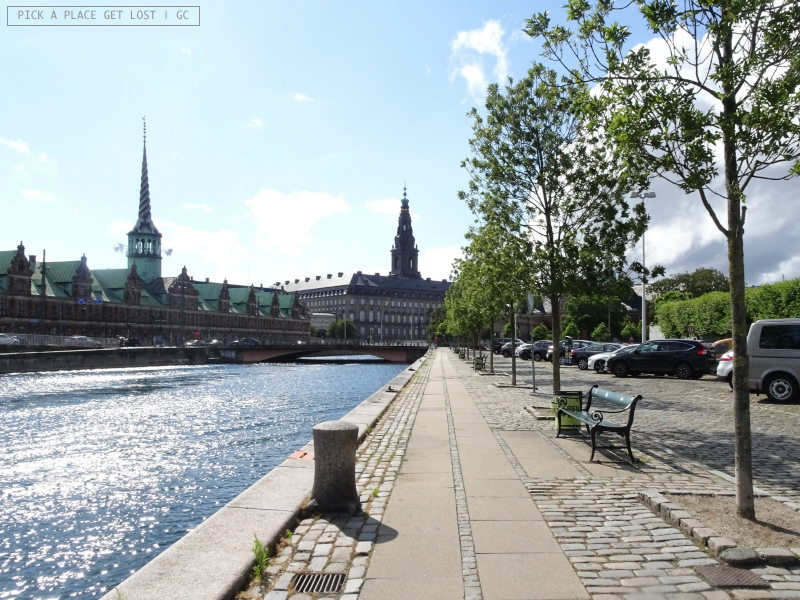 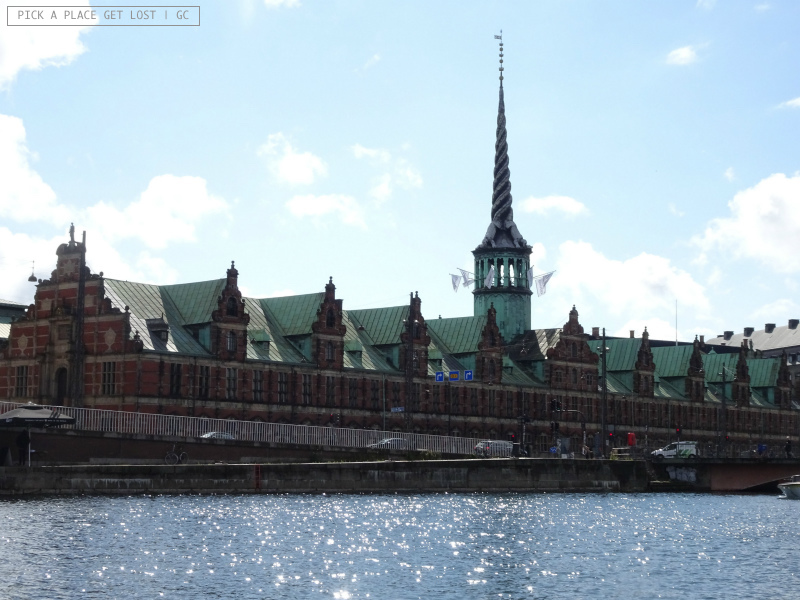 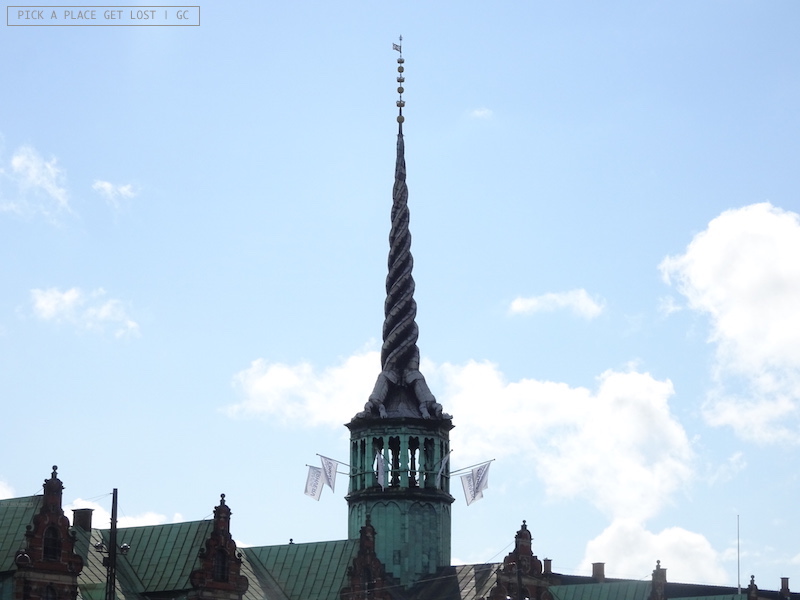 This is where chapter 1 ends, but chapter 2, Hear Copenhagen, will follow suit. Soon!