I have already mentioned Varden twice in the previous Molde-themed posts. The first time was when I listed the main sights and places of interests in Molde. The second was when, talking about Kristiansund, I warned that Molde’s Varden should not be confused with the Varden viewing tower situated on Kirklandet.

So now let’s really talk about Varden in Molde. To Molde and Varden I would apply the same logic as I did with Bodø and Saltstraumen: if you go to Molde, you go to Varden.

Varden (407 moh) is one of the most popular places in the city, largely because it makes for a truly privileged viewing spot over the city, the fjord, and the Molde Panorama – which, as previously mentioned, is a mindblowing sequence of the 222 peaks that surround the city.

Fear not, though, you readers out there, because this post of mine will not spoil it all for you. If you happen to see photos of the Panorama before you experience it first hand, it won’t be because you’ve found them here on the blog. 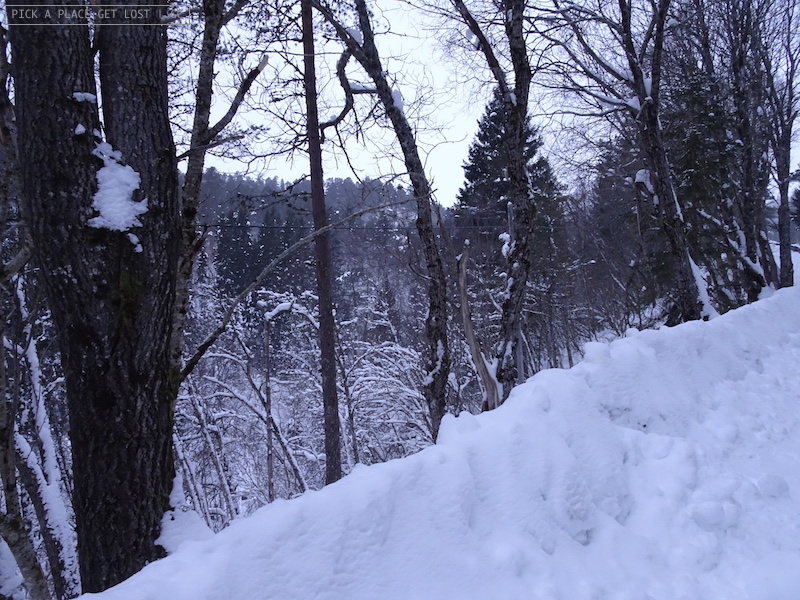 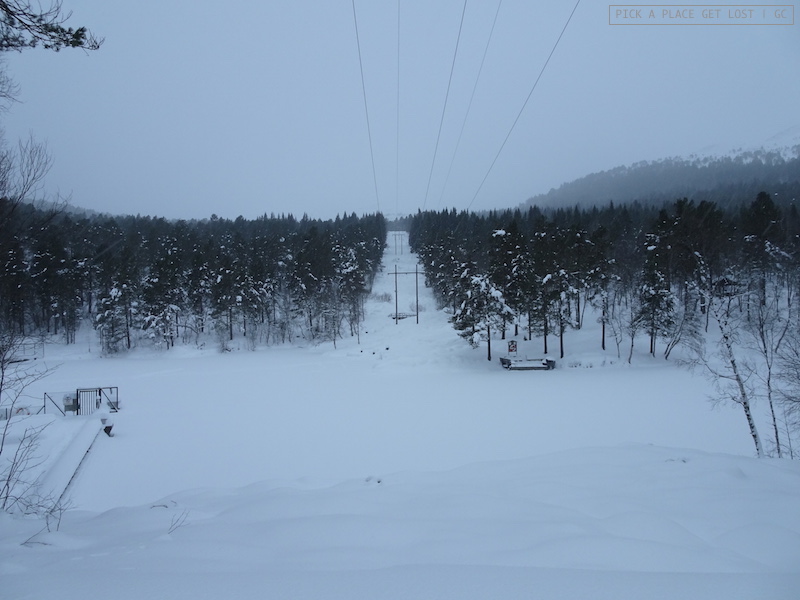 Yes, because, though technically I have been to Varden, I really cannot say I have had the whole Panorama experience. (YET.) The reasons can easily be labelled as snow and fog.

On my second day in Molde the snow was so thick that it would have hindered any plans I could possibly have for the day. And, well, my top plan was just going to Varden.

If it is true (which I believe it is) that ‘there is no such thing as bad weather, only inappropriate clothing’, then it’s also true that there is more to Varden than the Panorama. Of course, the view takes up a good share of the Varden experience, especially if you’re not from the Molde area, so it’s not within easy reach whenever you like. Let’s face it, I was rather bummed that the weather was that bad.

And yet, it was so beautiful, thanks to both the snow (hands down it was one of the most perfect snowfalls of all times) and the ascent (and descent) itself, plus a few unexpected extras. 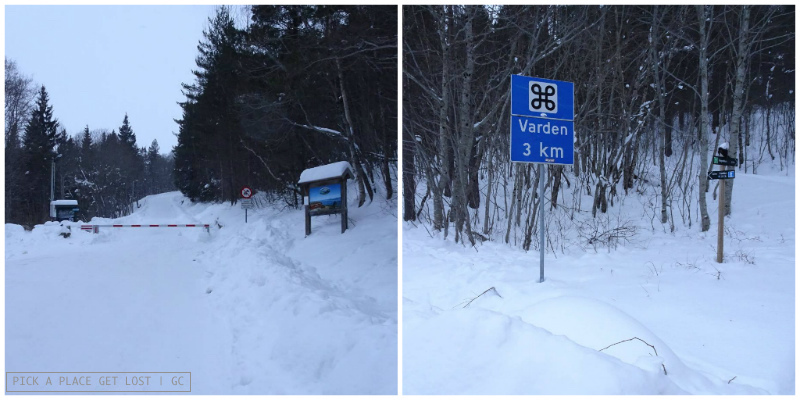 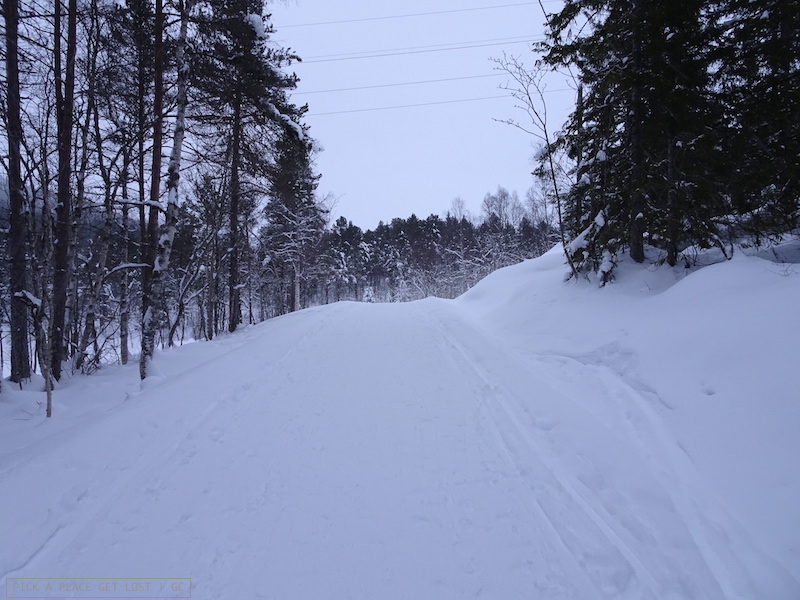 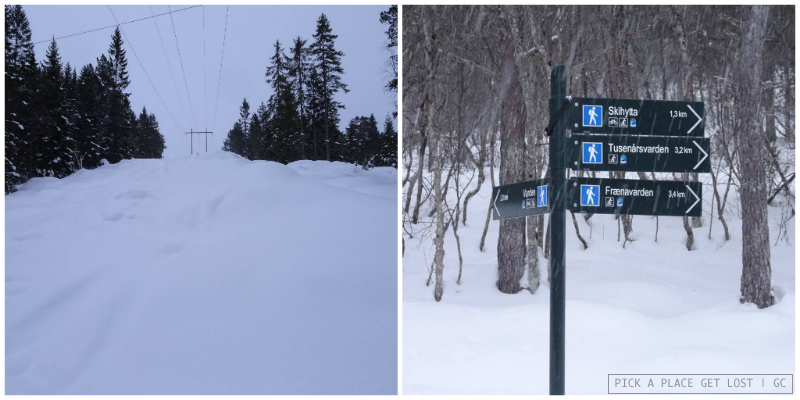 So in this post I will include a few tips and bits of info on Varden, as well as mention a couple of other viewing spots that are worth considering when visiting Molde.

To reach the path that leads up to Varden you simply have to head inland. Keep the fjord behind you, and go up one of the streets off Storgata that lead uphill. The ‘Varden’ signs will help you navigate the bundle of side streets and alleys that make up that (very residential) area of Molde.

The sky had been overcast since early in the morning, and just when I started heading uphill, it started snowing. I could tell that my chances to see the Panorama were growing slimmer by the minute.

The ascent is extremely straightforward. In fact, the main route is more like a proper road, partly accessible to cars. That’s why in Molde post #2 I also said that the hike to Varden is barely a hike at all. Just follow the main path, and you will get there.

I can imagine that, when there is no snow, it makes for a super pleasant walk uphill. The scenery must be stunning! In those extreme weather conditions, well wasn’t it tiring! The scenery, though, was stunning nonetheless. ‘Winter Wonderland’ really is a thing, sometimes. 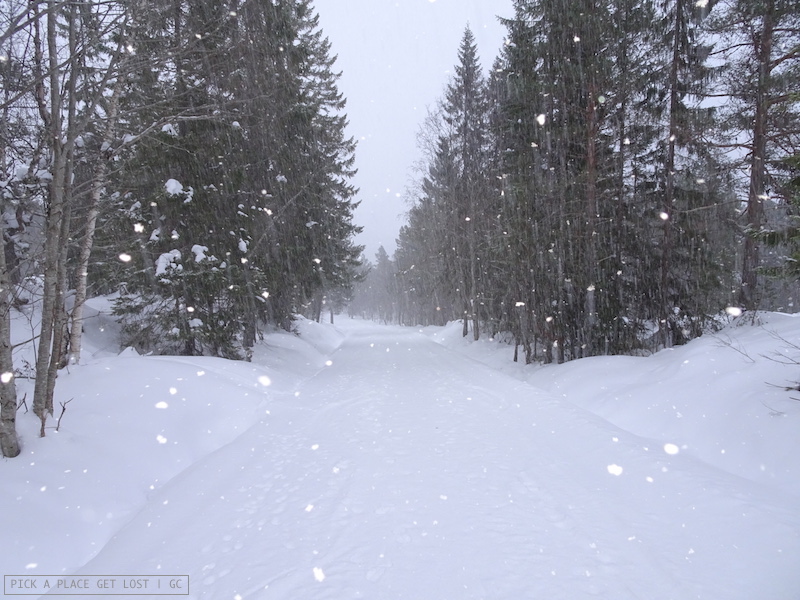 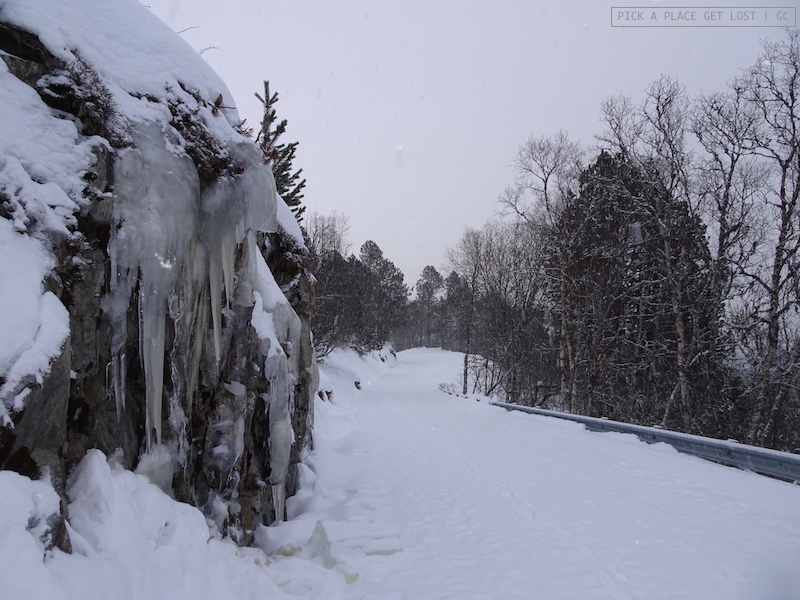 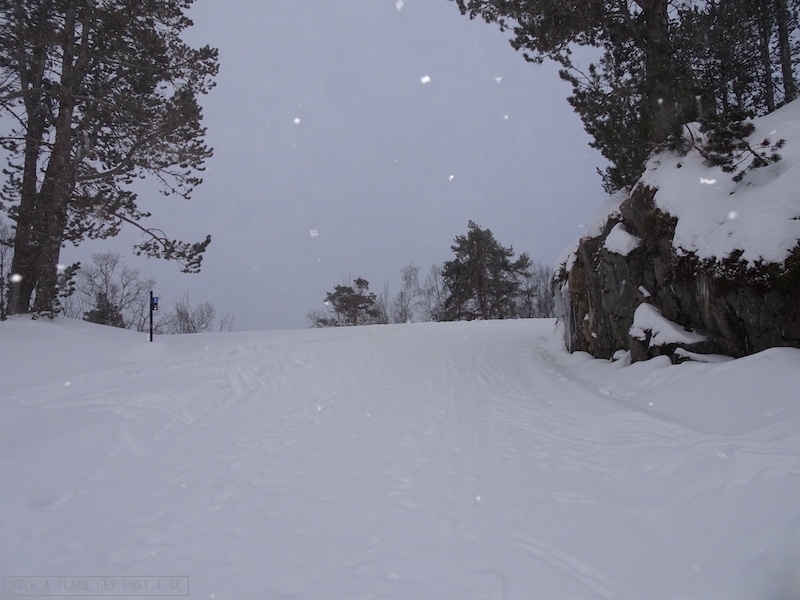 On the way to the top you will come across signs pointing toward side trails. Some of them are still likely to take you to the Varden top, while others would probably take you off to other hiking routes.

I’m unable to provide extra info here, though. I was not familiar with my surroundings, and because of the snow I did not feel like experimenting for fear of getting lost.

There was no one to ask anyway: I only briefly ran into two cross-country skiers, but they instantly disappeared into the snowy mist. The only noise was the sound of the fresh snow crunching under my feet.

As for the ‘Green Corridor’ (Grønne korridor in Norwegian), well it’s just the hiking route that goes from the seafront at Reknes (in Molde), through Romsdalsmuseet, and up to Varden top.

When I reached the top, I ran straight toward the wooden shelter of Vardehytta, the hut I knew I would find there. I sat outside the hut (which is closed in winter), and I changed a couple of the layers I was wearing. Speaking of which, having spare layers to change first thing as you get to the top is virtually mandatory.

I spent a few minutes contemplating the Molde Panorama – or lack thereof, since, as I’d correctly predicted, I couldn’t see a thing. 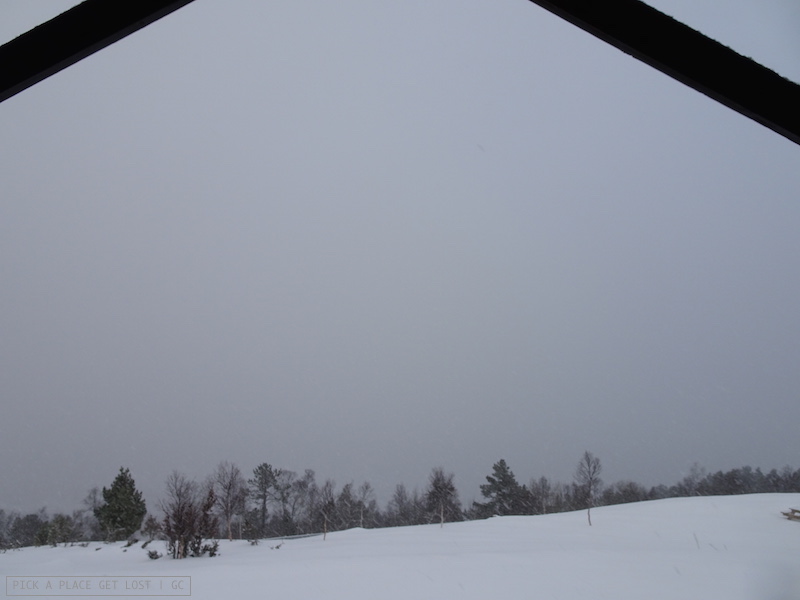 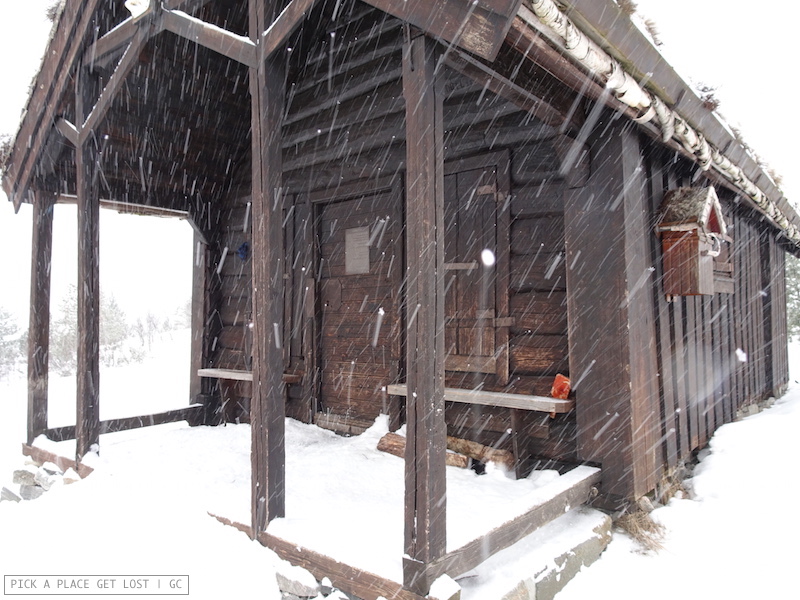 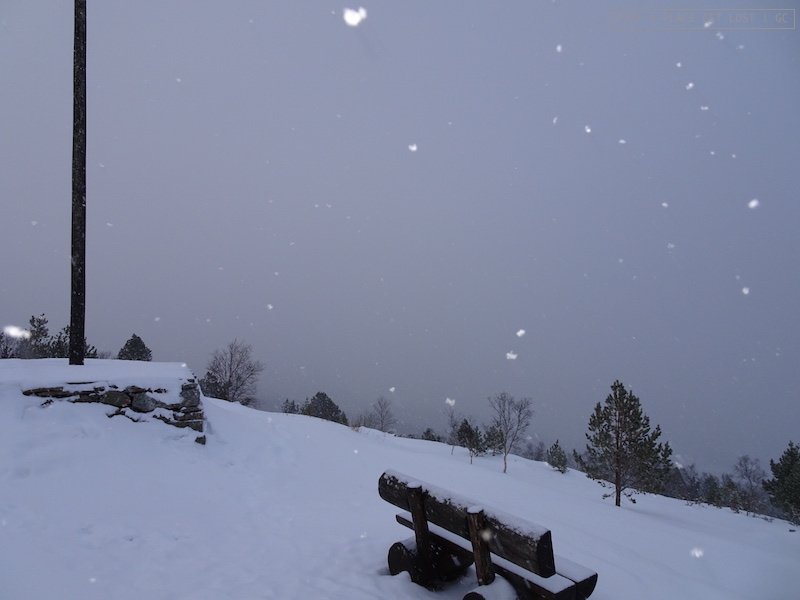 I was soon joined by two hikers and their lovely dog. They sat on the bench next to mine and, within a few minutes, we started talking, and we ended up sharing our respective life and travel stories for a good hour and a half. At some point they produced this amazing flask of homemade hot chocolate and a whole can of whipped cream, and they shared some with me.

When we said goodbye, they hopped on  their sleights, and swiftly slid down the path. After I took a few extra photos, I too headed downhill in the thickest snowfall I’ve ever experienced in my life.

What a pleasure to spend my time on Varden with them. Thank you, Guro, Paula, and super Leelo! 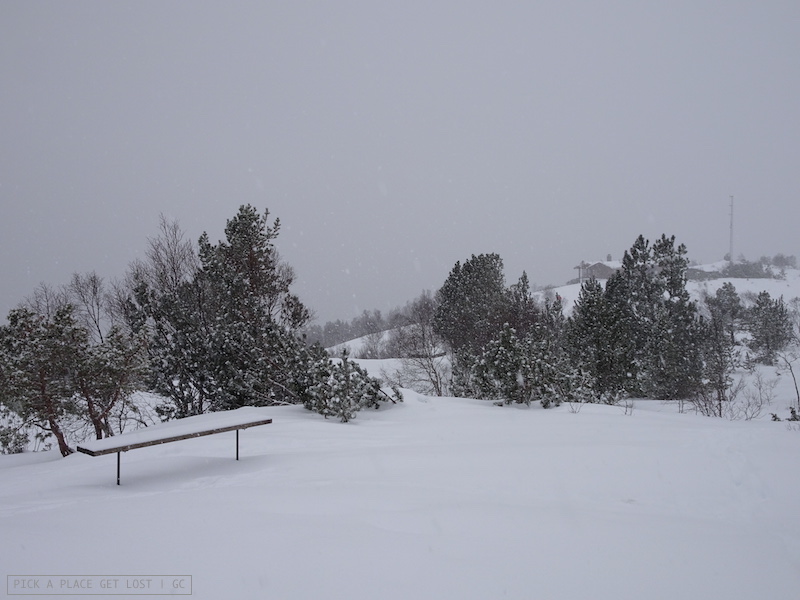 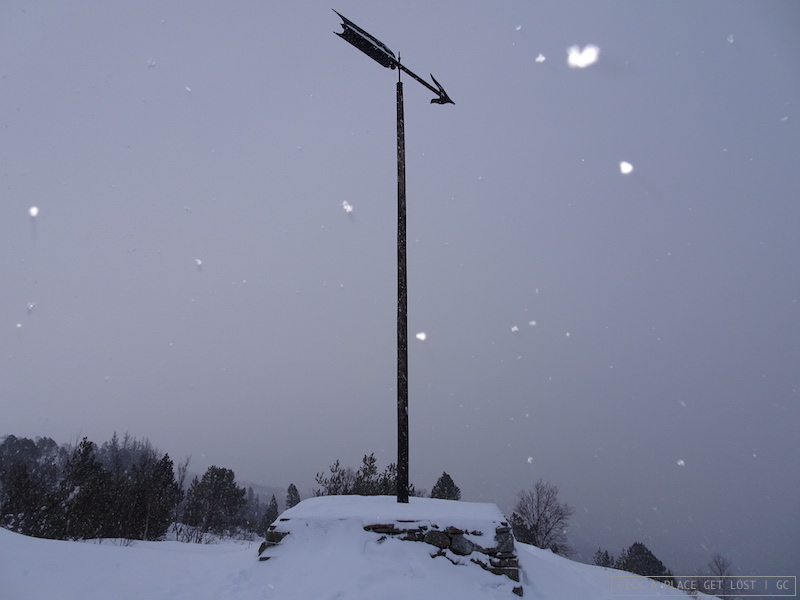 On my way down from Varden I found myself close to Romsdalsmuseet, where I found shelter from the snow, and learnt a lot about Molde and the county of Møre og Romsdal in general. But you can read all about that in the dedicated post. Moving on now!

It’s hardly arguable that Varden provides the most spectacular view of Molde. It’s also true, though, that if you are not able to reach up there (because the weather is bad, or because you’re only transiting in Molde on the way to your actual destination, e.g. via Hurtigruten), you can find a couple of interesting viewing spots in the heart of the city. One of them is the seashore footpath near Aker Stadion. 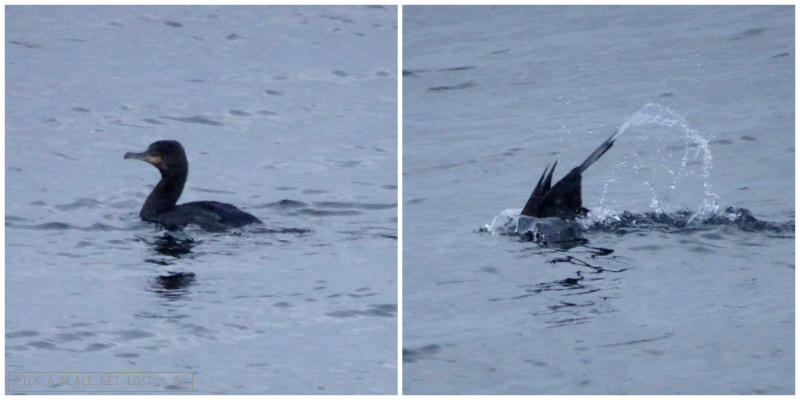 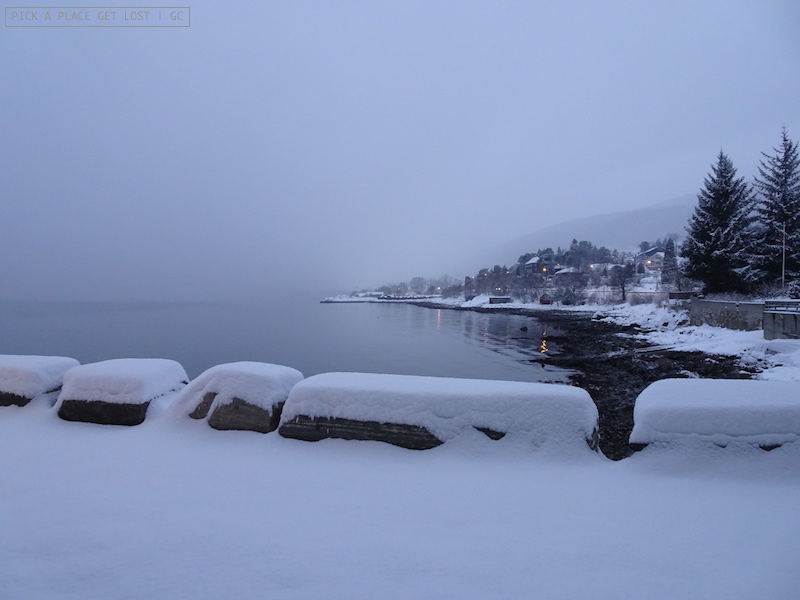 The path begins right next to the stadium, although it kind of feels like the continuation of the Hamnegata Promenade. Follow the path, reach the Scandic Seilet sail-shaped building, and make yourself comfortable. The view of the sky and the sea is breathtaking.

When I got there it was still snowing. Then, suddenly, I glimpsed a minuscule pinkish dot in the sea of grey clouds and, after some 20-30 minutes, the pink became pale yellow, and expanded, like when you dip a paint-sodden brush in water. The result was this: 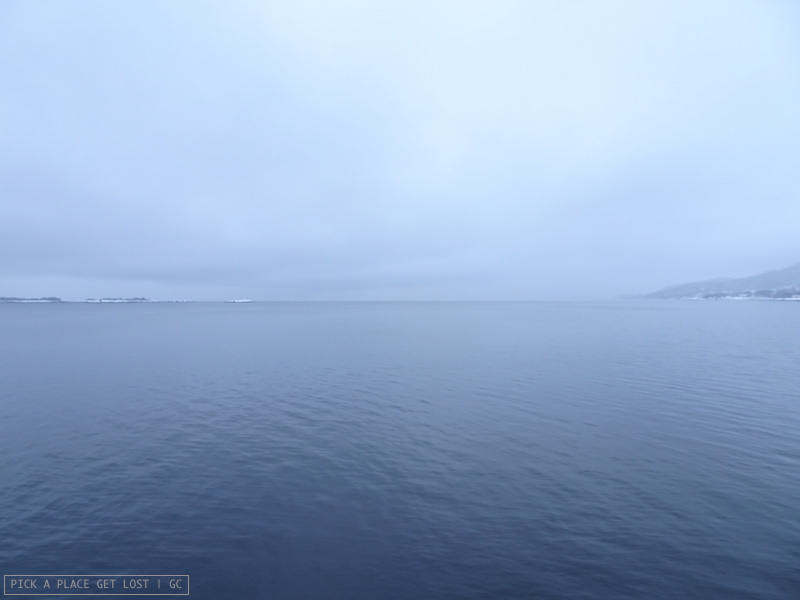 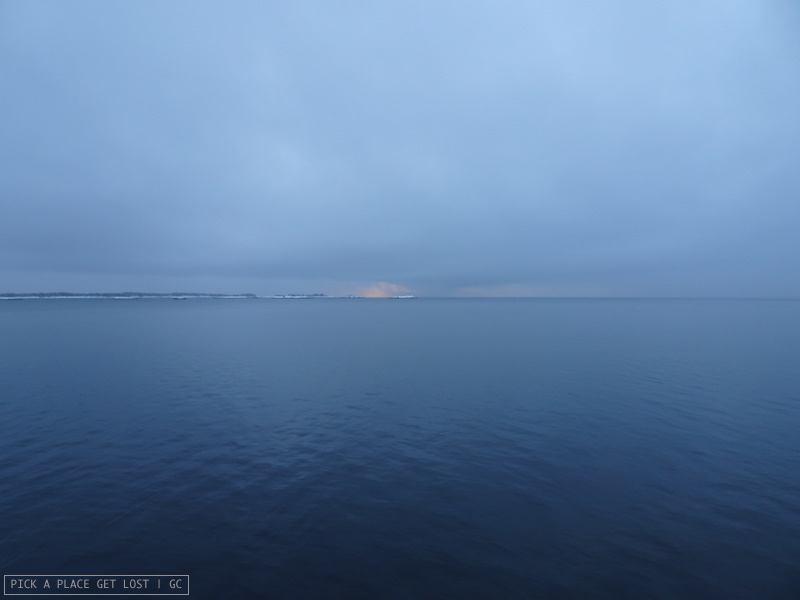 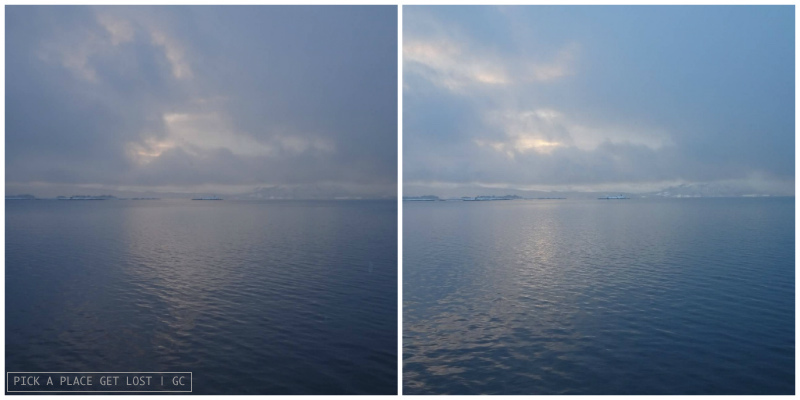 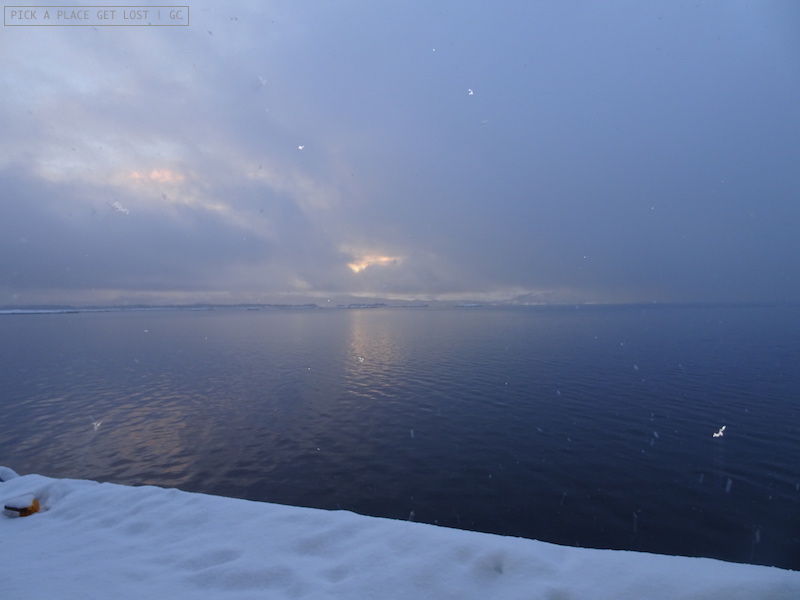 I had already briefly walked around the stadium area the night before, so I can confidently say that, whichever time of the day you choose to head down there, it will be a good idea!

Reknesmoloen and the usual goodbye

I must have spent over an hour and a half leaning against the back wall of the Scandic Seilet. Then, suddenly, all the yellow vanished from the sky, and (guess what?) it was snowing again.

I was heading back to Storgata when I spotted the little pier next to Molde Fjordstuer Hotel. I’d already noticed it multiple times over the past day and a half, but I’d never got round to walking down the pier. I’m very glad I did: the pier is a perfect viewing spot. 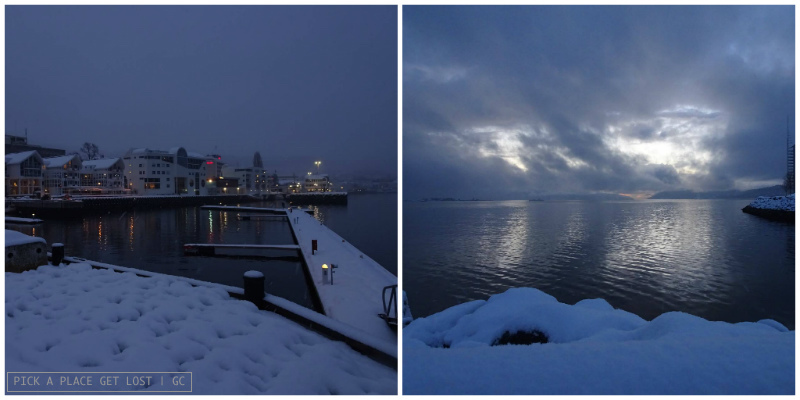 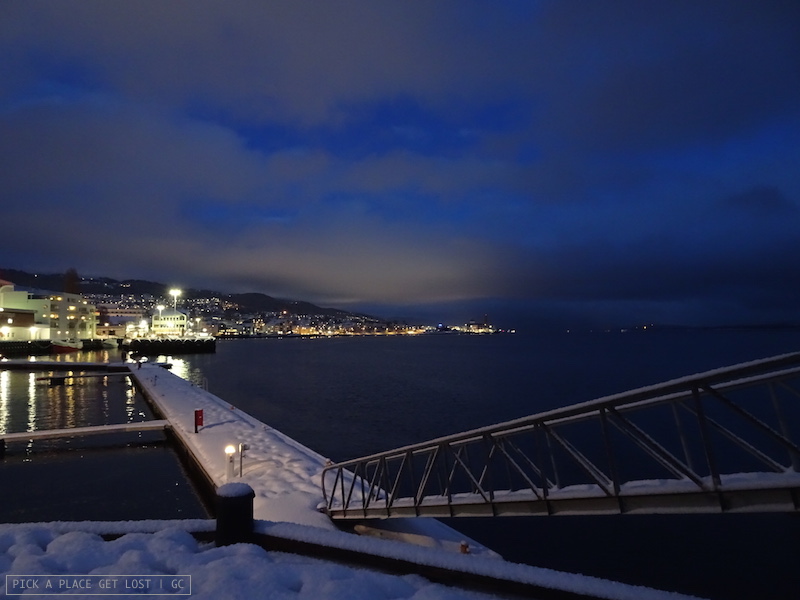 The only issue you might experience is decide which view you should go for. Yes, because if you go and stand by the tiny lighthouse, on one side you will have the sea, the sky, the mountains, and the fjord, while on the other you have the whole city, as if draped over the slopes.

I was there just before night fell, and I was lucky enough to glimpse a ‘spark’ of sunset. 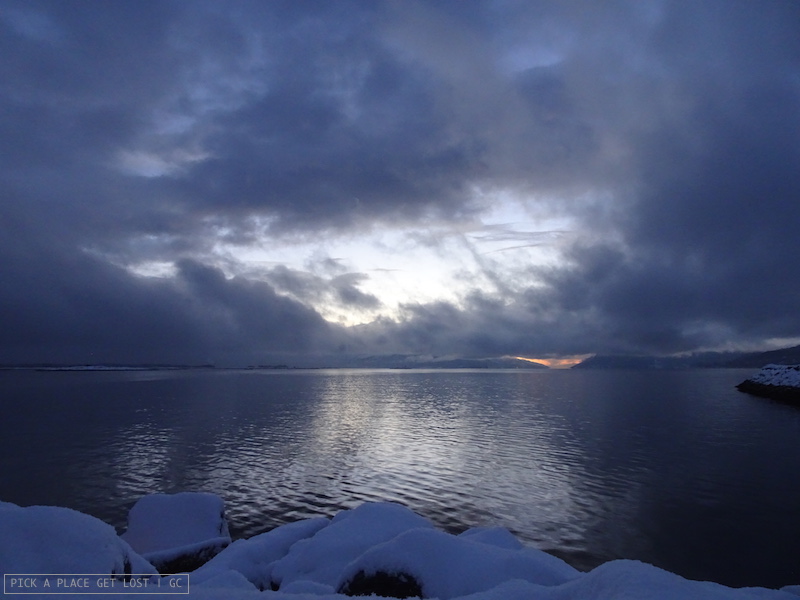 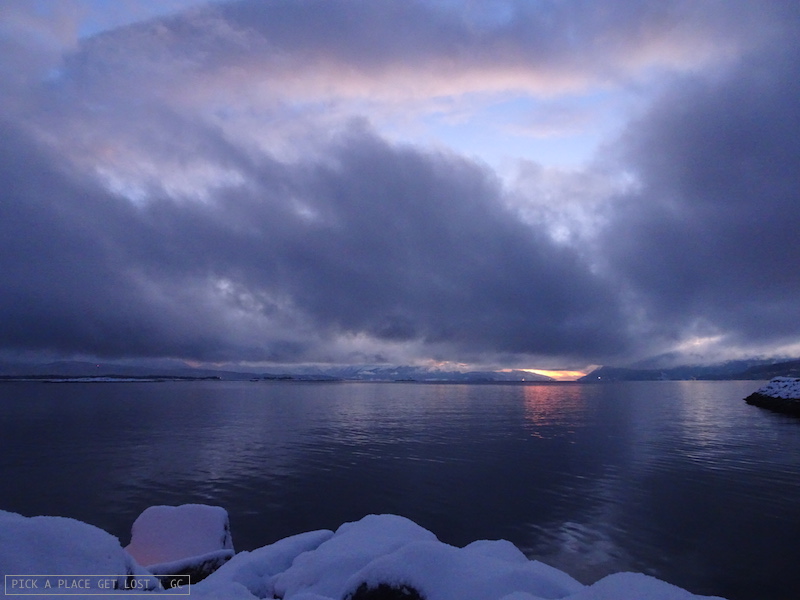 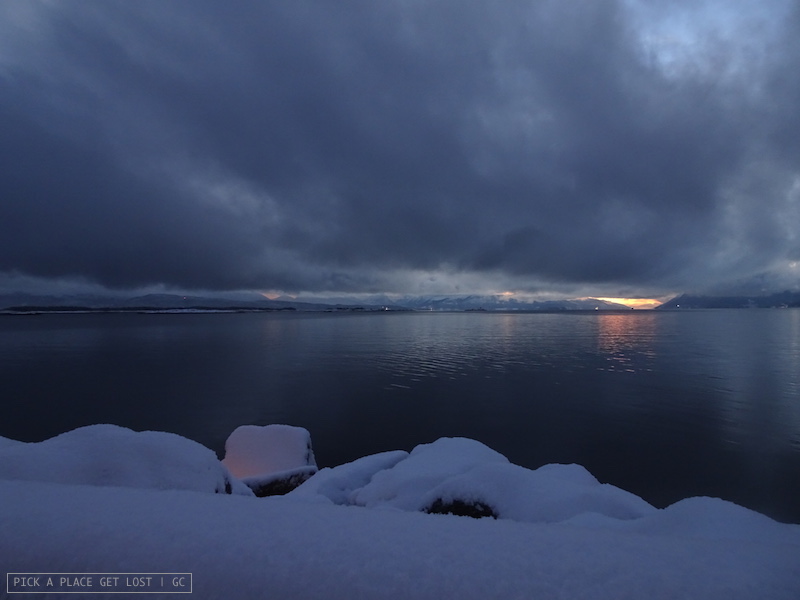 I eventually made it back to my hotel. My flight the next morning was very early, so it was time to say goodbye. Needless to say, Molde is one of the places I will want and have to visit again, and not only because I have to see all the things I still haven’t seen, or because I would love to see what it looks like in summer.

It’s about the Panorama view from Varden. There’s more to Molde than that, but there is also that. I hate unfinished business, so I believe I will have to do something about it.

So long, little Molde. Till next time.