This post is a kind of inevitable continuation of the previous. The reason I had to split it in two is that I couldn’t fit All The Photos in one.

So we’re still talking about Soča Valley here, namely two sites: 1) Kozjak Waterfall, which in the previous post I called ‘waterfall no. 2’, and 2) River Soča and its mindblowing views.

I will be brief, I promise. 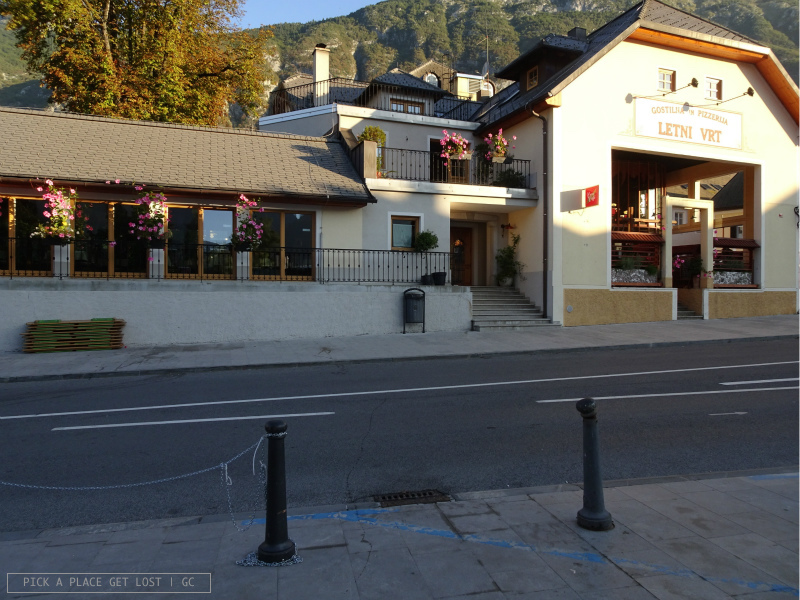 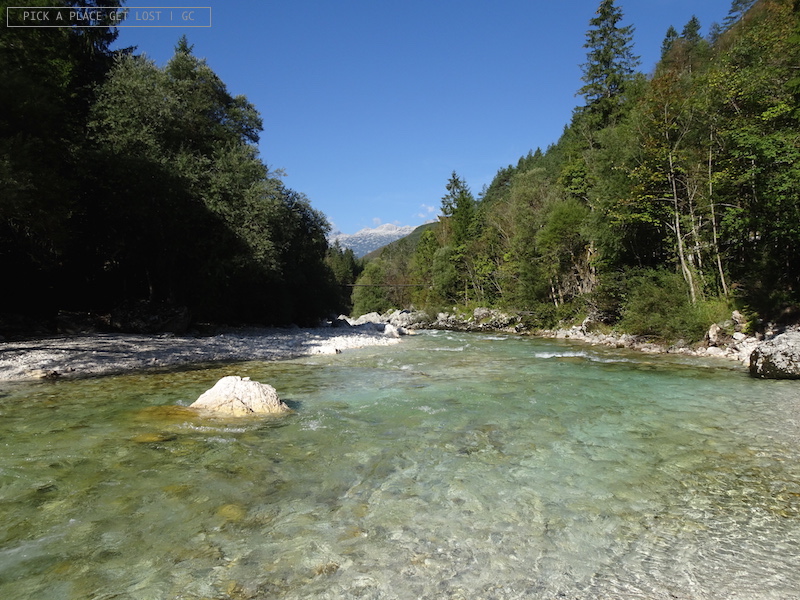 The short version is: Oh my God it will leave you speechless.

The (slightly) long(er) version is this. Kozjak is a 15-metre high waterfall located very close to Kobarid. The trail that leads to the waterfall is accessible from several spots around the town.

As we left Boka Waterfall, we headed straight to Kobarid, and we drove through the town. The ‘Kozjak’ signs led us to a car park, where another ‘Kozjak’ sign pointed toward a path off the main street, which ended up into the forest.

That’s it, at that point you just have to follow the trail and keep an eye on the signs, so you don’t pick the wrong one. The most crucial recommendation, though, is: don’t stop at the first, small waterfall you find, even though it’s labeled ‘Kozjak’. Keep going down the trail, you’re not there yet. 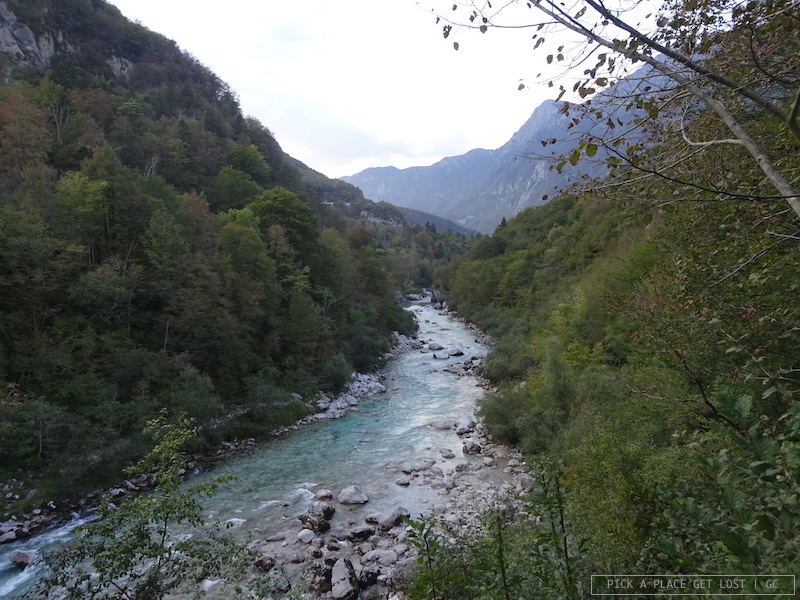 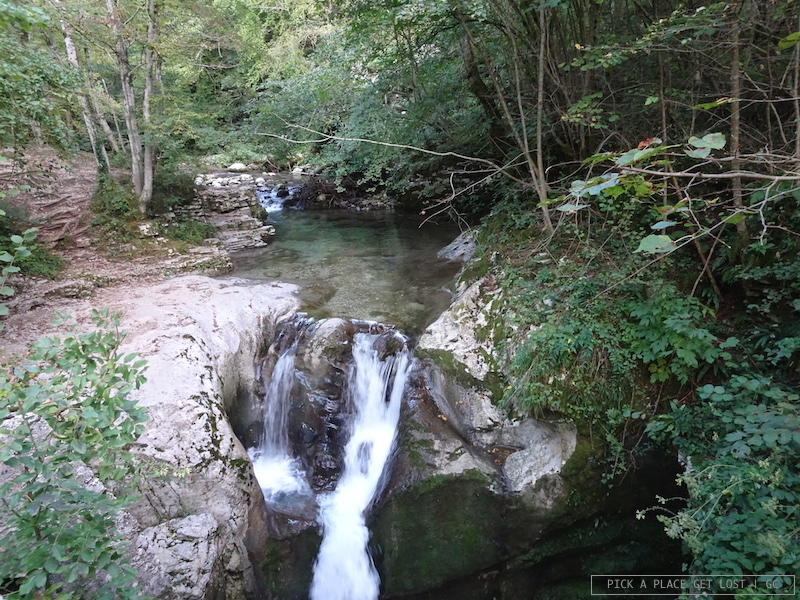 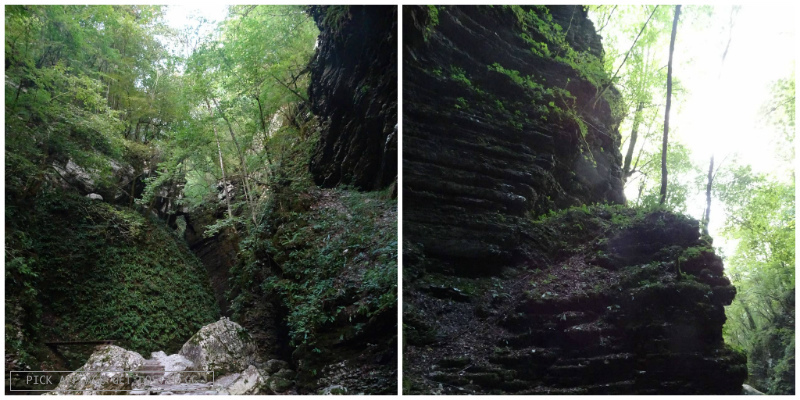 As you walk on and the forest grows thicker, the rumbling noise of water grows stronger. You will know that you’re there when you reach a semicircular cave. From outside you still can’t see a thing.

Walk up the stone steps leading into the cave – and watch out, as the wooden platform you walk on might be wet and slippery. The platform bends as it enters the ‘cave’, and…

Now, that is Kozjak Waterfall. It’s hard to believe the rocky amphitheatre surrounding it was not built specially for the waterfall to fall into it.

You can return to the car park via the same trail you came from. Almost forgot: the scenery is fairly bewildering all the way. I omitted this detail so far, but it was kind of an easy guess to make, right? 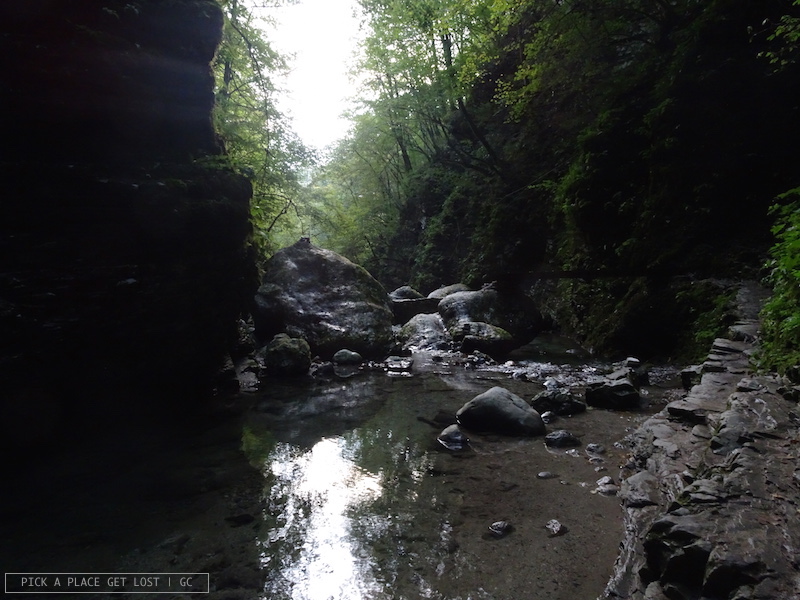 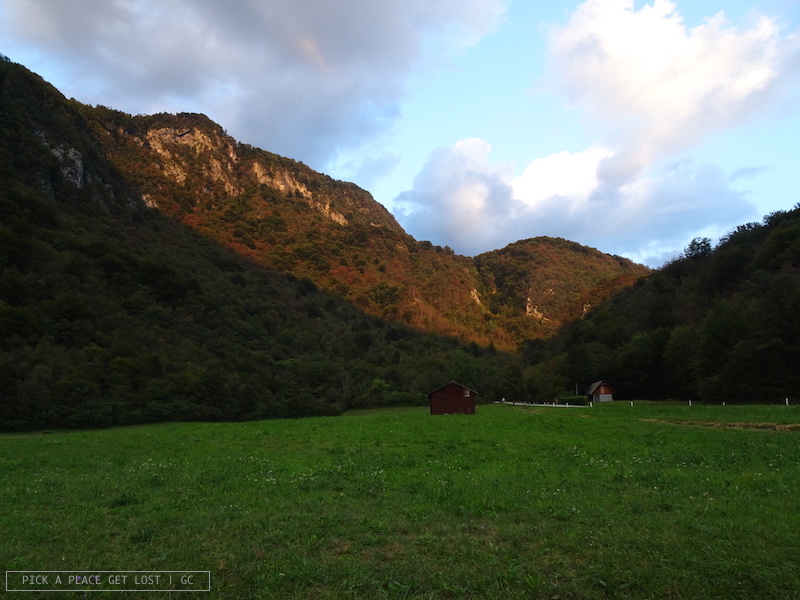 As I said in the previous post, you can stop anywhere along the river, as long as there’s just enough space to park your car. Wherever you happen to be, the river will be right there for you to make the most of it.

We left Bovec straight after breakfast, and drove down road 203 toward Kobarid. The plan was to drive all the way down to the coast, with an intermediate stop at Škocjan Caves along the way.

Even before passing Kobarid, though, we pulled over at some random, nondescript spot along the river. It was still fairly early in the morning. That also meant that there was no one around. The only sound we could hear was the rumbling noise of the turquoise Soča waters glistening in the morning sun.

We left the car, and we headed down to the river. 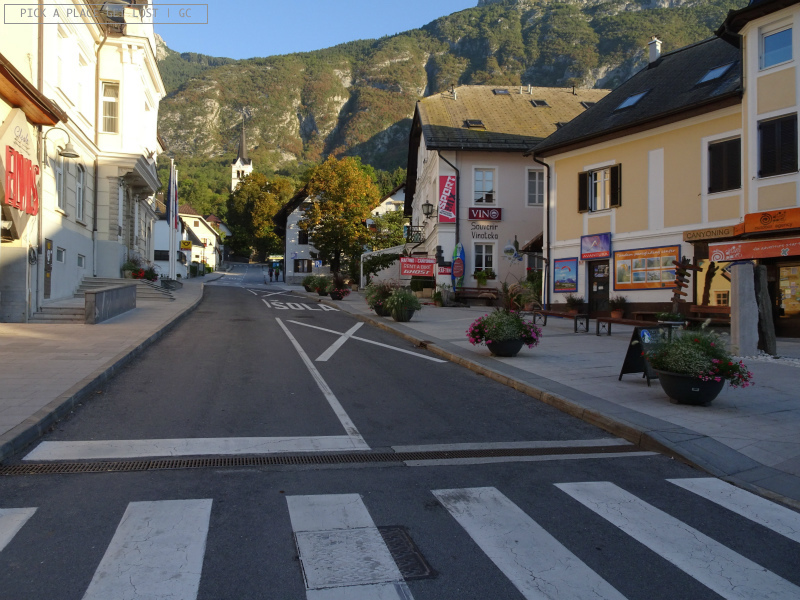 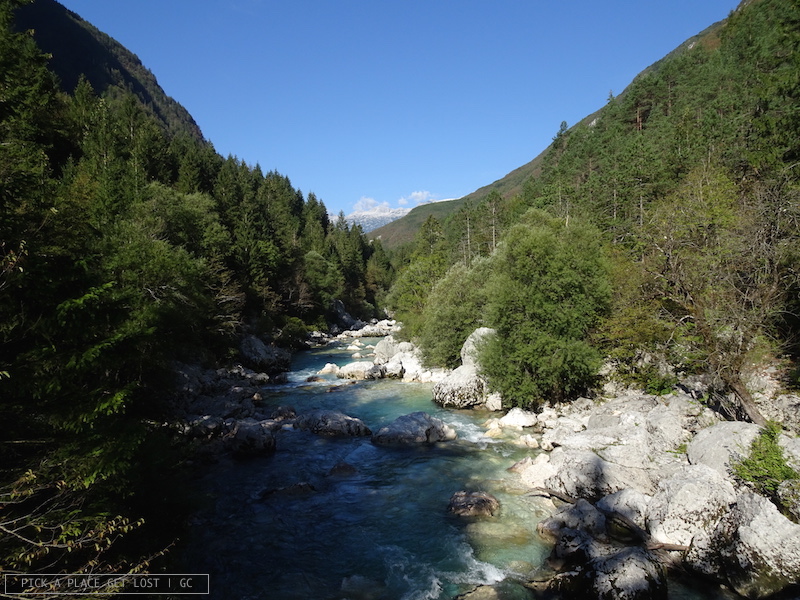 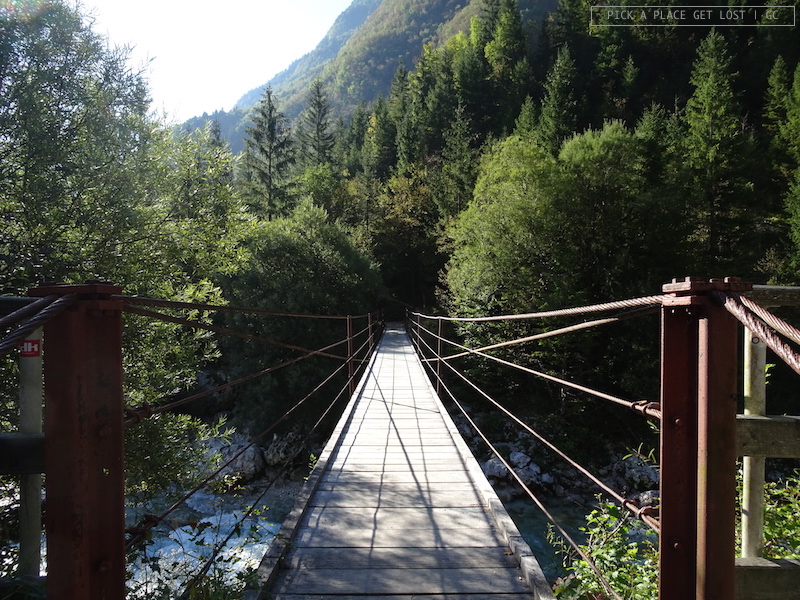 This is the point where I could easily provide a number of insightful fun facts about the river and the valley. I could tell you that it has its source in the Julian Alps at 1,100 metres above sea level, that it flows between Slovenia and Italy, or still that its overall length is around 140 km.

The truth is, aside from all the fun facts, it’s the Soča views themselves that make the difference. In fact, they also happen to be one of the reasons Slovenia has a very special place in my traveller’s heart. 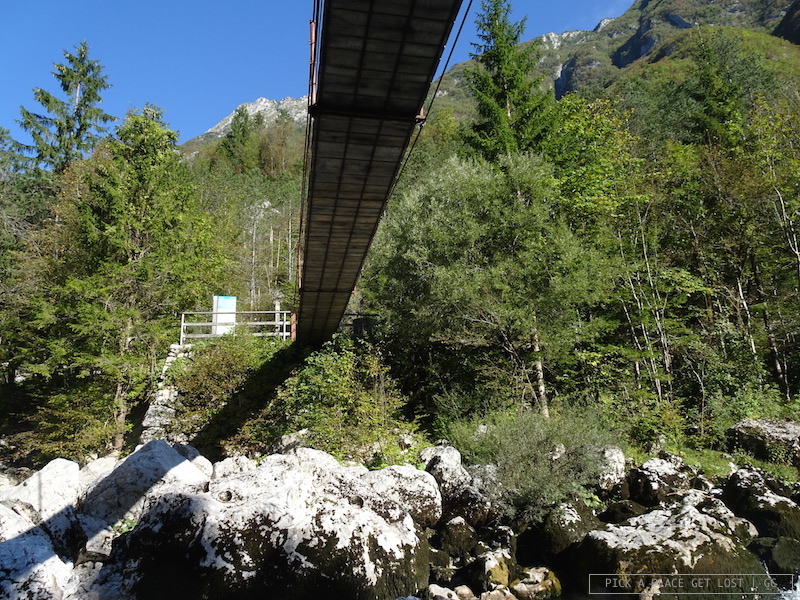 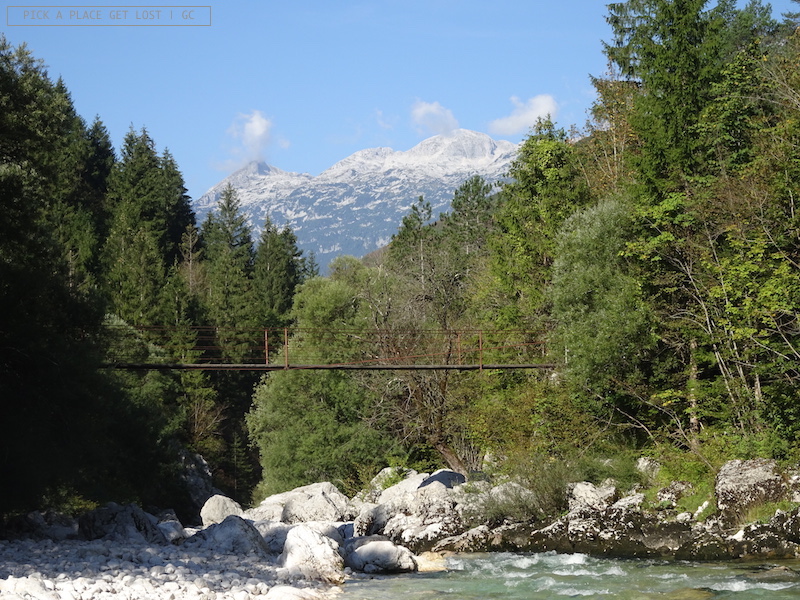