Regardless of one’s religious feelings, the religious Kiev demands attention. Its colourful onion-domed churches are a delight for the eye.

2 Sept 2017. I didn’t know what to expect from Kiev – or Ukraine at all, for that matter. So I thought having no expectations at all would be the wisest approach.

What I can say for sure, after a brief stay in the capital, is that Kiev is many cities in one, and to put together an honest and faithful portrait of its multiple sides one would have to be there for much longer than the mere two days we could afford to spend in the city.

Regardless of one’s religious feelings (or lack thereof), the religious Kiev demands a high level of attention. In fact, our first morning around Kiev included almost exclusively churches. Obviously and inevitably, we started from Andriivskyi descent (Андріївський узвіз) itself, where our hostel was conveniently located. 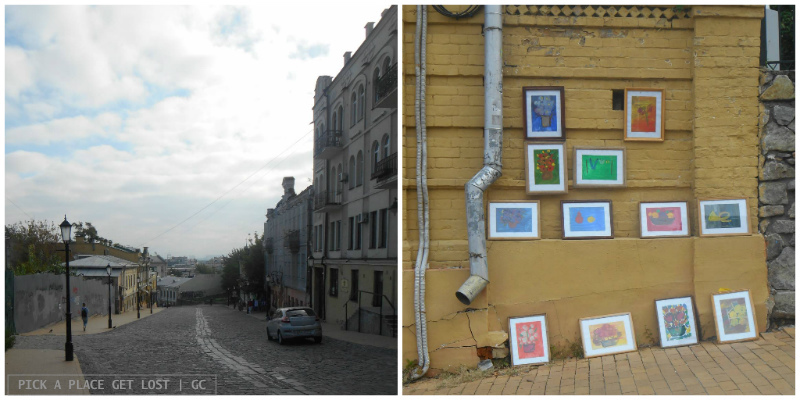 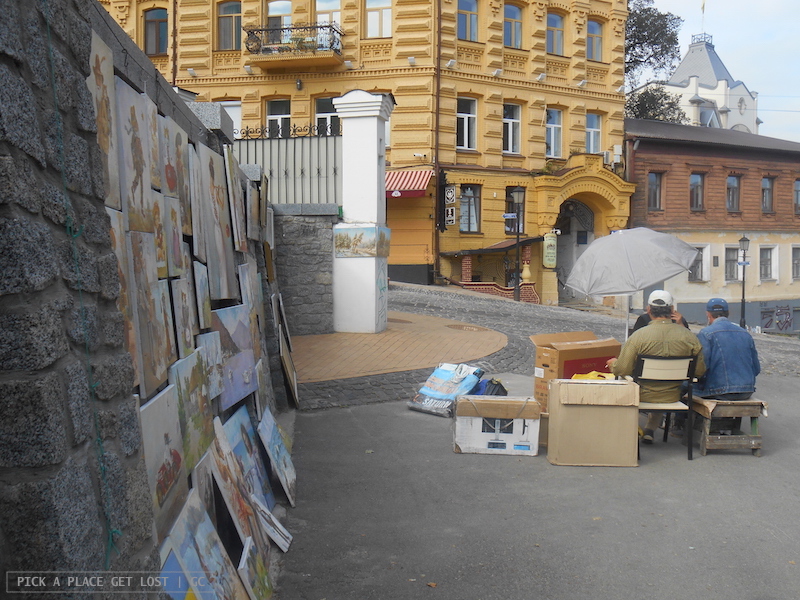 Head up the descent and keep going to the top. It might take a while: the street has a lot to offer, and its many distractions might slow you down a bit. Trust me, though: it’s worth every step of the way. As we walked up in the silver morning light, I couldn’t help noticing how everything was nice and pretty and quaint, ‘streetsy’, artsy and street-artsy: bars and cafés (one right next to Bulgakov Museum), stalls selling handmade traditional clothes, and tiny shops.

The artsy rate grows higher toward the top, where the street forks and Aleya Khudozhnykiv (Алея художникiв) displays a real and actual outdoor art gallery, where every painter has its own stretch of wall to lean its works against.

The top of the street is also where the uniquely majestic St. Andrew’s Church (Андрiївська церква) sits, overlooking the Podil neighbourhood. The church is a landmark of Kiev and Ukraine, and rightly so: its fifty shades of blue and gold glimmer in the (day)light and glow in the dark from the square beneath the hill.

I’m not the religious type, as I have pointed out repeatedly, nor am I a huge fan of religious architecture. But with some religious buildings you can’t but acknowledge how utterly stunning and beautiful they are. St. Andrew’s is a case in point. I can’t say anything about the interiors: we we-ren’t allowed inside, as the church was being renovated.

The outside, though, is indeed utterly stunning and beautiful. Perched atop a grassy hill (which is seemingly posing a potential threat to the stability of its foundations), it has teal green domes that look like they’re covered in velvet with golden ‘buttons’ drawing lines all over their surface. The neat lines of its walls highly contrast with the hill slope below and the curvy lines of its domes. 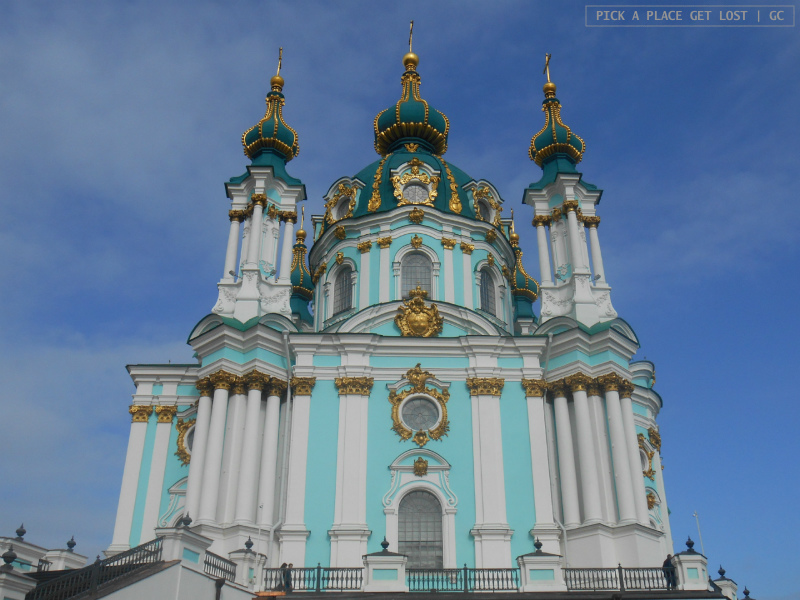 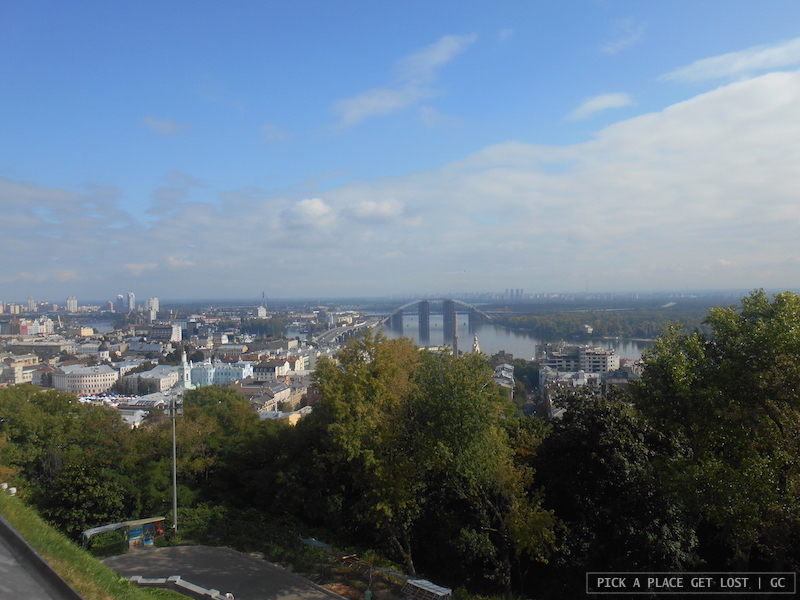 Once you’ve walked up the stairs to the building, take a few minutes to walk all around the perimeter of the church.

On the right-hand side there’s a balcony, and the view from there is breathtaking. If you happen to be there on a bright, sharp day, you will see everything: Kiev bridges, its skyline, the Dnepr waters and its many islets. Exactly, wow.

When we left Andriivskyi descent, we headed toward the centre. We walked past the Ministry of Foreign Affairs, whose amphitheatre-like shape, massive columns and sculpted flags in the marble low relief are hard to miss. If you gaze up and down the austere-looking building, though, you can already glimpse St. Michael’s Golden-Domed Monastery (Михайлівський золотоверхий монастир).

That, obviously, was also going to be our next stop.

The monastery dates back to the Middle Ages and was repeatedly renovated at later stages, till the Soviets tore it down in the late 1930s. The current appearance of the monastery is the result of a fresh reconstruction that took place in the early 2000s. As the name suggests, the complex is especially known for its shiny golden onion domes, unmistakable even from a distance.

The cornflower blue of its exteriors, though, is what struck me most. It makes it look like a marzipan house, like it’s straight out of a fairy tale. In fact, it happens to be another landmark of Kiev and Ukraine.

We didn’t have time to explore the interiors (the museum in the bell tower and the refectory). So we contented ourselves with a stroll around the area, and gaze in awe at the perfection of the architecture and the detail of the windows’ décor. The monastery really is a work of art in itself, and the monumental fresco right by the entrance is another powerful reminder of that. 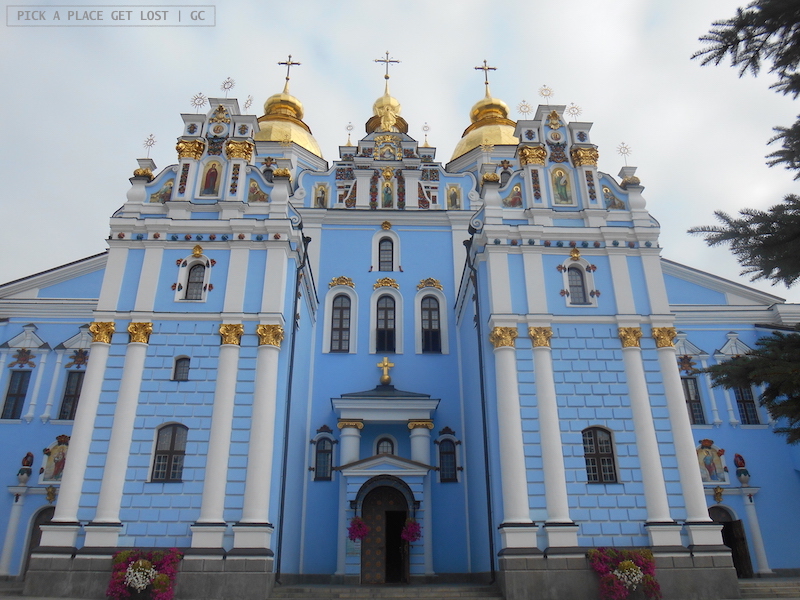 As you step out of the monastery onto the square, it won’t take you more than a few seconds to guess now where you’re heading next. Saint Sophia’s Cathedral (Собор Святої Софії) is located in Sofiyska Sq., at the opposite end of Volodymyrsky proyizd from St. Michael’s, so it’s only a short walk from one monument to the other.

We walked past Princess Olga’s Monument (Памятник княгинi Ользi), where Kiev princess (Olga, obviously) stands fierce and severe on a podium together with St. Andrew (on her right) and Cyril and Methodius (on her left).

As we got closer to the square, we realised that some super popular sports event or festival was taking place in the square. The area was colonised by a crowd of highly fit sporty people jumping and dancing all over the place to the sound of abnormally loud music from loudspeakers strategically placed around its perimeter. On one side of the square the statue of Ukrainian military hero Bohdan Khmelnytsky patiently observed the excited crowd from astride its horse. 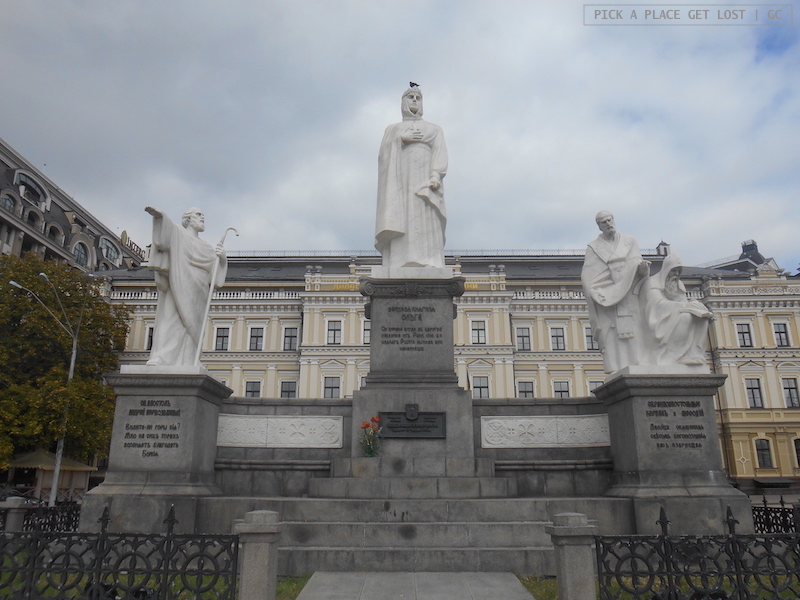 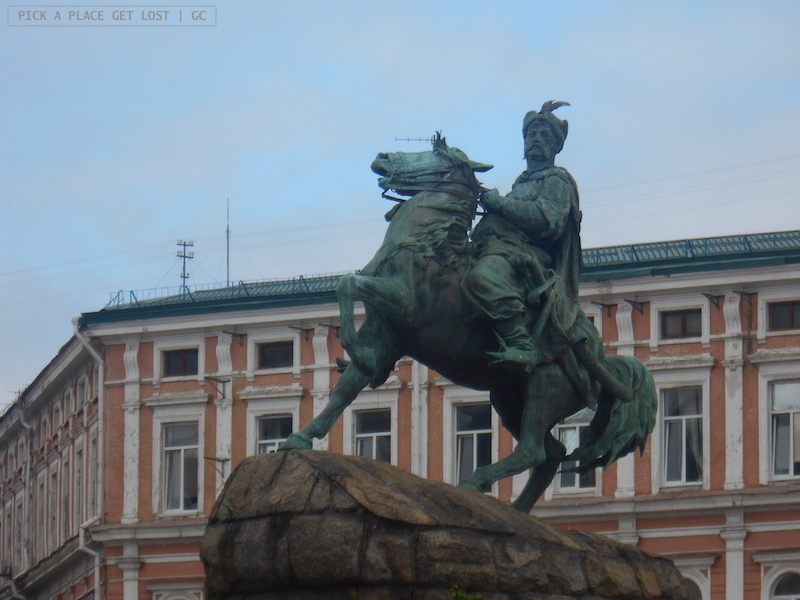 Though initially a bit disoriented, we managed to skip the fitness frenzy, and briskly walked straight past the gates. Again, no time for a thorough visit, so we only bought the tickets for the cathedral territory.

The complex includes a number of monuments and gardens. Entering the premises felt like stepping into a bubble of peace and quiet. The church dates back to the 11th century, and so do its mosaic and fresco decorations. It also had a key role in the old Kievan Rus times, especially culture wise, since it was also home to the very first Kievan Rus library.

Unlike St. Andrew’s and St. Michael’s, it’s also characterised by a fairly sober appearance: its domes are mostly green with relatively little gold and brick-wall patches here and there. It’s the bell tower that stands out for its elaborate decoration and shape, similar to boxes of different shapes piled on top of each other. 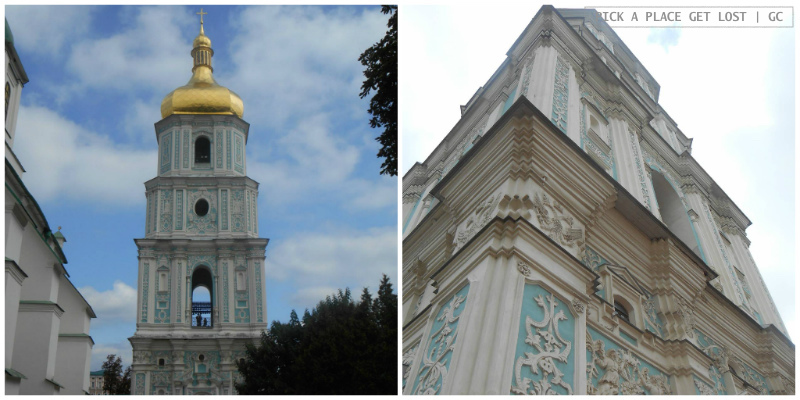 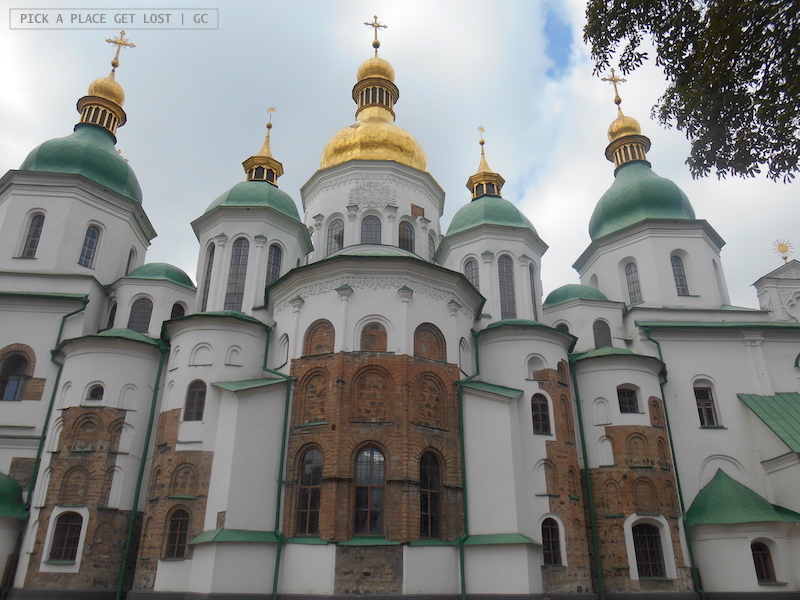 Just outside St. Sophia we stumbled upon a rather odd-looking sight: a maze-like structure entirely made from unhinged doors, windowpanes and wooden boards. As it turned out, it was a project by the International Committee of the Red Cross centred on a specific category of victims of the war in Eastern Ukraine: the missing.

Wandering through the labyrinth turned out to be a rather alienating, disorienting experience, which must have been the whole point of the installation and most definitely hit the mark. I won’t dwell on it any further right now, but I’ve included some extra info and thoughts on it in a dedicated post.

After we visited Saint Sophia, we thought we needed a break from all the religious sightseeing, so we headed straight to Maidan Square, the true beating heart of the city. (More about Maidan in the next Kiev post).

Only in the afternoon did we ‘accidentally’ go back to it when, down Taras Schevchenko Boul. (бульвар Тараса Шевченка), Kiev’s high street, we came across Saint Volodymyr’s Cathedral (Патріарший кафедральний собор св. Володимира) and, obviously, stopped briefly to visit it.

Saint Volodymyr is relatively recent (it dates back to the late 19th century) and probably isn’t Kiev’s most representative church – (also) blame the other religious complexes I’ve talked about for that.

Its architecture, though, is objectively flawless, and its interiors, which combine Art Nouveau influences, golden décor and warm, dim lights, are extremely interesting and beautifully evocative. 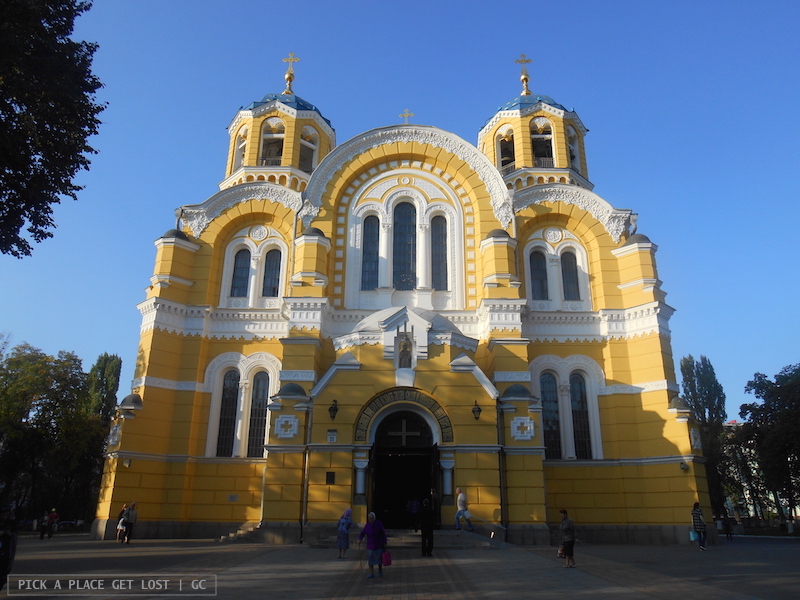 4 Sept. Yes, 4th September: it’s the day I visited the Kievo-Pecherska Lavra (Києво-печерська лавра) and, yes, I remember it very well, Why? Er, because it was… how to put it? Intense, that’s what it was like.

The Kievo-Pecherska Lavra, also one of the Seven Wonders of Ukraine (and also Saint Sophia is), is a religious, historical and cultural landmark of exceptional importance. The Lavra, whose name literally means ‘Kiev Monastery of the Caves’, is a Christian Orthodox monastery founded in the 11th century and still active, with dozens monks residing in its premises.

From afar the complex looks like a ‘citadel’, sitting on the grassy hills overlooking the river. It covers a fairly large area and includes several buildings, monuments and caves (hence the name). It would be rather pointless on my part seeking to make a list of all of them, since:
– I would fail to mention one or more of them
– I honestly do not know all of them by name
– We have not been inside any of them. Why? Because the jeans we were wearing were just above the knee, and you won’t be allowed in, unless properly dressed. 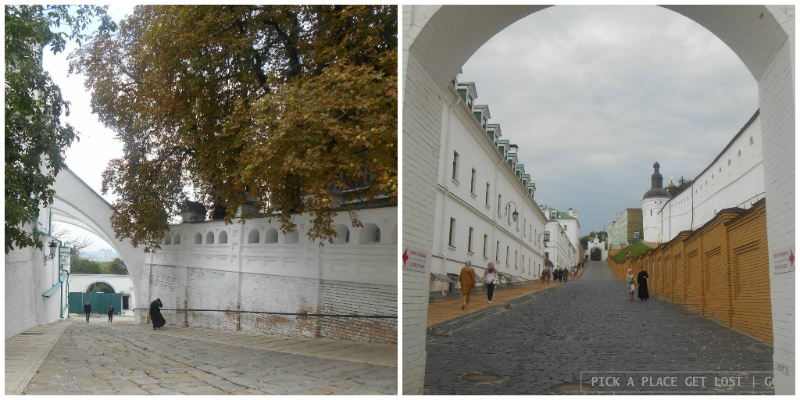 Most of the Lavra buildings have a few features in common: the white-and-green architecture, one or more golden domes that glisten in the sun, and a number of worshippers and/or pilgrims in the vicinity of the church entrance.

The atmosphere is one of the most solemn, austere and deferential I’ve ever experienced, and there’s an almost surreal silence lingering in the air. The Lavra is a tourist ‘attraction’, yet, strikingly enough, I believe we saw more habitual goers than tourists as we walked its paths and alleys.

Here and there along the way we also had a few ‘pious women’ throw furtive black looks at us (sometimes in a ‘Black-Mirror-like’ way, which felt a bit creepy). Our outfits were probably a tad too informal by the Lavra standards, so we came across as somewhat disrespectful.

In our defence, I can say the degree of religious zeal that ‘fills the Lavra air’ caught us completely unprepared. We didn’t expect it.

And yet, jokes aside, it was somewhat fascinating to see such heartfelt devotion in the eyes, gestures and countenance of many of the people we saw and came across. It looked and felt like something routine, ordinary to them, like something you’ve internalised to the point that you barely realise you’re doing it. 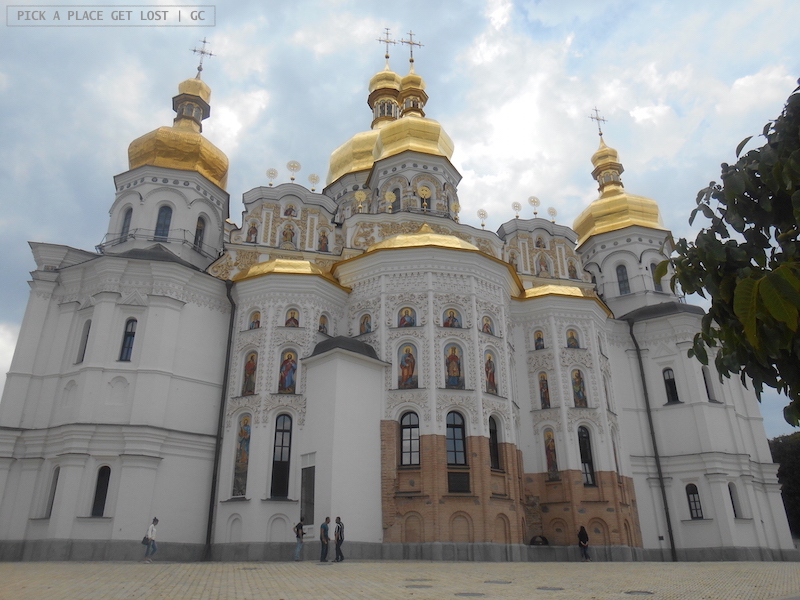 If you’re a regular churchgoer (or an architecture enthusiast), you could probably spend up to a whole day around the Lavra premises. If you’re not religious type, well you might still end up spending there longer than initially planned, especially if you get lost and can’t find the exit – which, needless to say, is the incident that befell us when we resolved to leave.

We eventually found a ‘secondary’ gate on the side opposite to the entrance we’d used to access the Lavra. We had sort of no idea where we were, but we found ourselves right by the river, which was super nice and super refreshing.

The Lavra was the very last bit of religious sightseeing we had in Kiev – which, as you can see, was quite a lot, overall. That is why I thought I’d talk about the ‘mundane’ counterpart of the city in a dedicated post. Straight after the whole Lavra experience, there were only two answers to any possible question we might have: a bench and ice cream.