A half-day hike around Mount Rønvik and Keiservarden, one of the most popular hiking routes in the Bodø area, and the perfect view from the top. Let’s go!

Say you have half a day left to spend in Bodø. It’s not enough to go somewhere out of the city: you have a flight to Oslo in the afternoon, and you can’t afford to miss it. It’s still enough time to actually do something, though, and not just wander about the centre or by the harbour – you’ve done a lot of that, and you’d do more, but you also want to see some place you still haven’t been to.

If there’s one thing you should not miss is the area around Mount Rønvik and Keiservarden. 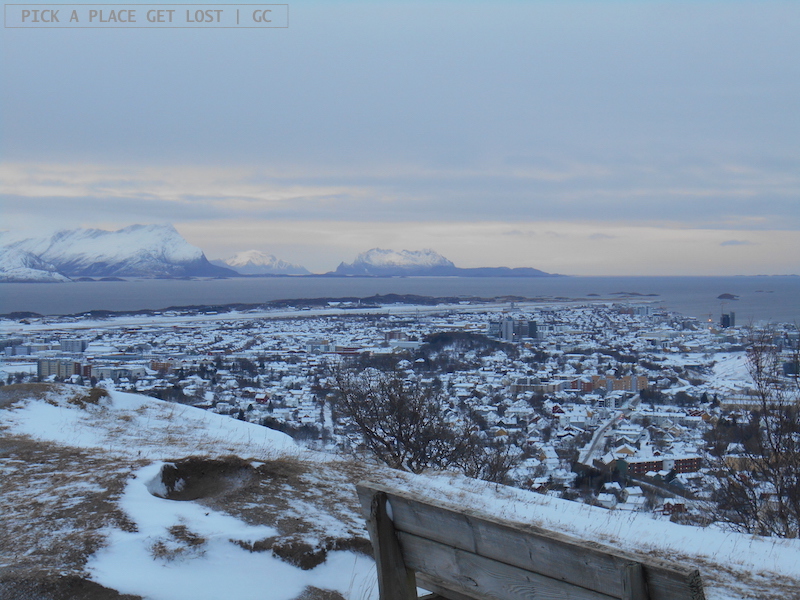 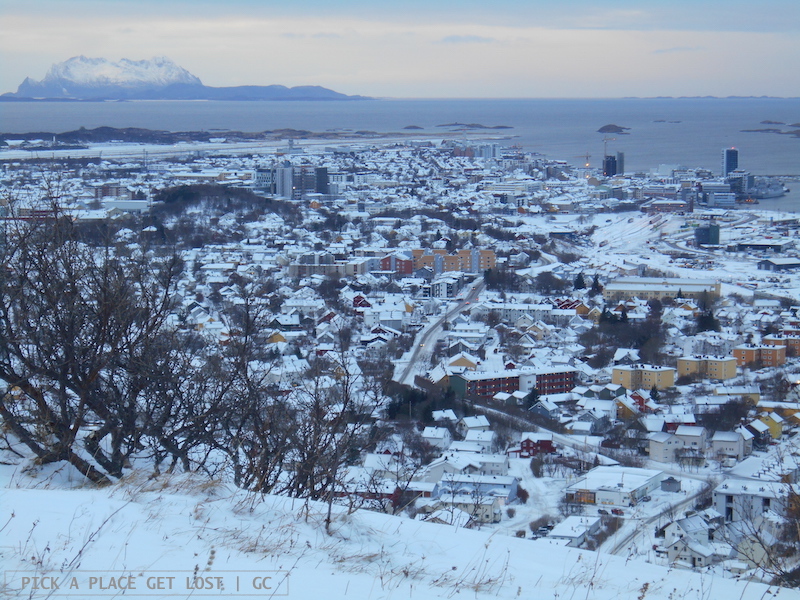 1. You can spend much longer than just a bunch of hours around Mount Rønvik. There are several trails around there, and that, alongside the lakes and the one and only Keiservarden, will keep you busy for as long as you like.

2. It’s so close to the city that you can actually head there anytime you want as often as you want.

Getting there is super easy. Walk down the street called Sjøgata (one of Bodø’s high streets) not toward the city centre, but in the opposite direction. Turn left into Rønvikveien, keep to the main road and turn right into Fjellveien (there will be signs guiding you around). It’s quite a walk from the centre, but there’s also a bus going that way, if you want to make it faster. 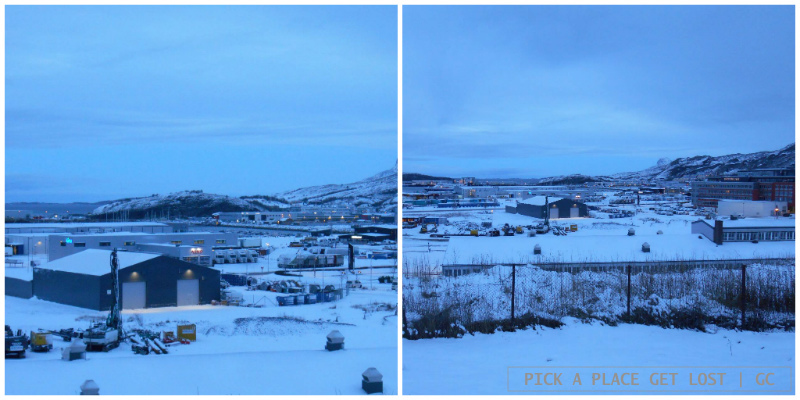 The road takes you to a car park area at the head of the trail. Admittedly, while I was there none of that was actually visible: the heavy snow had coated the whole landscape with a thick white blanket that made it objectively impossible to tell trail, grass and rocks apart.

I picked what resembled the main trail, and walked uphill, where the snow soon turned into the most slippery ice. I did not have spikes underneath my boots, so I struggled a bit (read: a lot) to keep going (read: standing). By sticking to the (few) patches of earthy and snowy ground, though, I made it. I found myself in front of a roundish frozen pond (Nedre Vollvatnet) where the trail also forked, making it hard for me to choose which way to go. 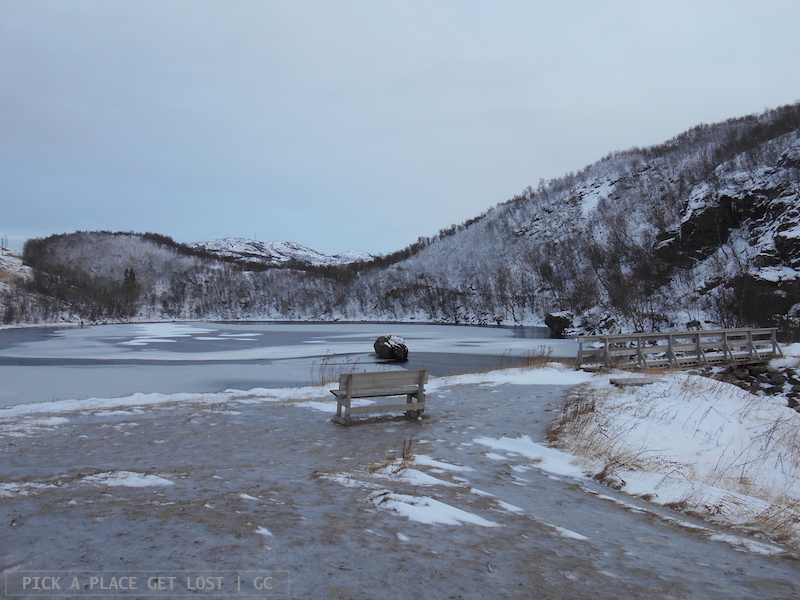 After some pond-ering (pun intended), I turned right, crossed the wooden bridge over the lake, and… well, virtually disappeared into fresh snow through the trees. The trail went uphill, which kind of suggested there’d be something good up there. In fact, it wasn’t even a proper trail, but the boot tracks meant others had walked that way before, so I did the same. There’s a first flat spot, where you can easily guess the view is amazing, but the bare trees are rather thick, and you don’t get the full extent of it.

I felt I could be contented with getting that far, that I could make do with that and go back. It was uber slippery, and I had (almost) fallen 75948574 times already.

Oh but the trail is just there, think how beautiful it is over there… 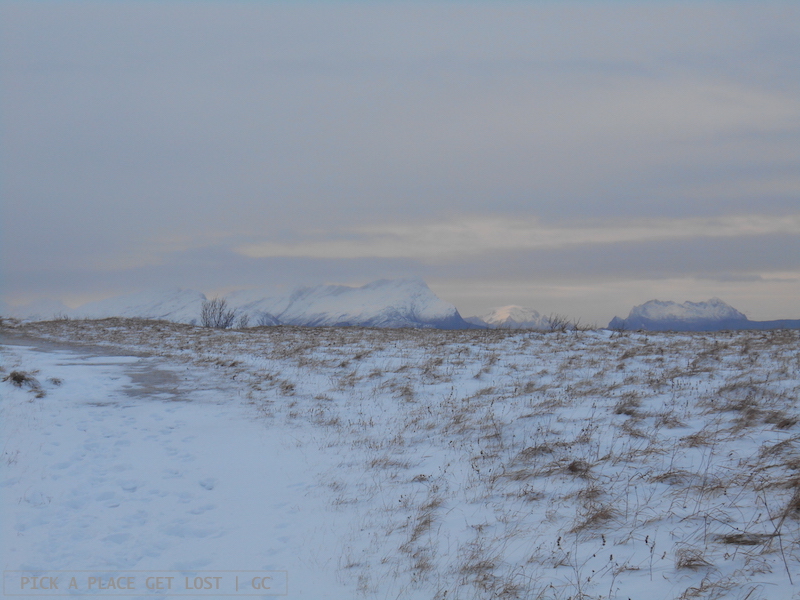 ‘A little farther’ meant the actual top – which, super honestly, I didn’t know was that close after all. The view was breathtaking – and not only because the wind blew so hard it literally took my breath away. It was The Perfect 360-degree View: the pink sky, the Bodø from above, snowy Landegode, the sea, the mountains… I was there all alone, and it was perfect.

I somehow managed to make it back down to the pond, which also meant falling another 394758493 times, but by then even falling had become quite ordinary, so I barely noticed it. 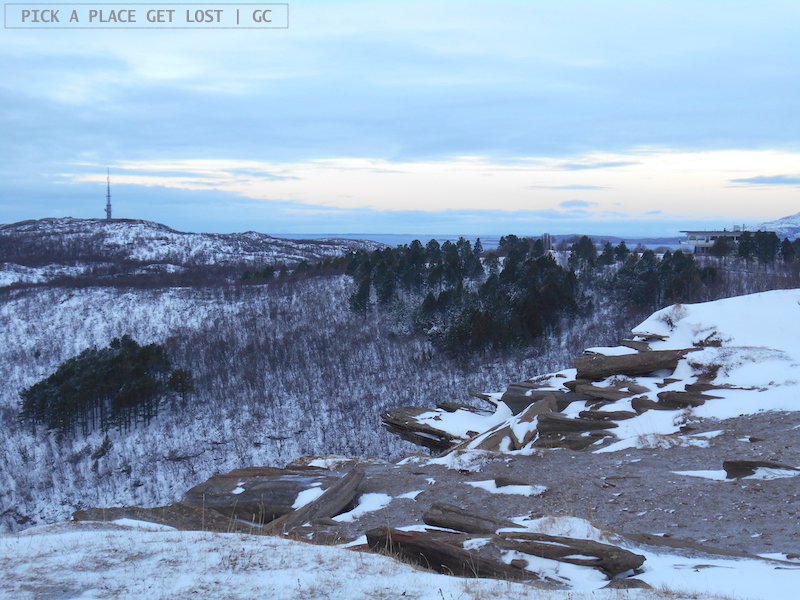 Back at the wooden bridge, I noticed a super snowy path that went all around the lake and disappeared behind the mountain slope. It looked tempting, hadn’t it been for All The Ice. ‘Seriously, you can’t also head there, be happy with all you’ve done’, I sternly told myself.

Oh but the trail is just there, think how beautiful it is over there… 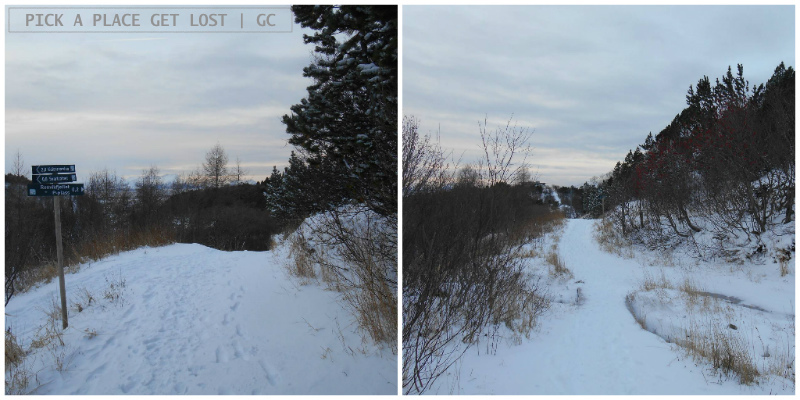 I kept going for another 15-20-25 minutes, and gradually came to realise that I was bumping into a lot of people along the way: small groups of friends, middle-aged couples, lonesome hikers, and parents with kids… Of all the places I saw in and around Bodø, that one turned out to be the most crowded of all.

I kept going till the trail went along a second, slightly larger, half-frozen pond (Øvre Vollvatnet), yet the snowy path did not stop. Nor did I, because I was too curious to see where it went. I was only a bit worried about getting back to the hostel too late, but I thought in that case I’d just quickly pick up my backpack and rush to the airport. 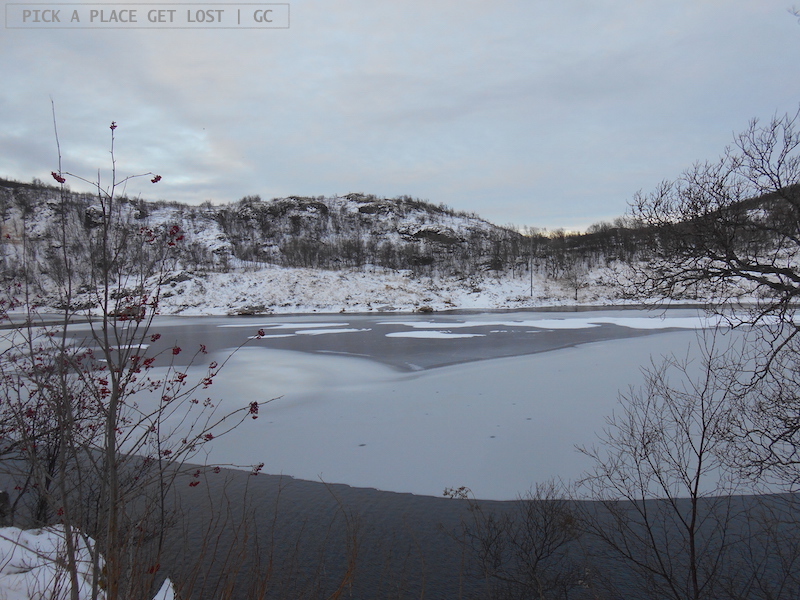 My heart skipped a beat. Another, yet much larger lake (Svartvatnet) was right there in front of me, and I was amazed well beyond words. What’s more, when I followed the path to the left of the lake, the sun came out – and not the usual kind that shines super bright when the sky clears up. It was pale, kind of pastel orange, almost as if it didn’t want to shine too bright so as not to stand out too much against the black and white of the landscape.

I was in the middle of the perfect Arctic landscape, and it was, beyond doubt, one of the most unforgettable, breathtaking views I’d ever seen. 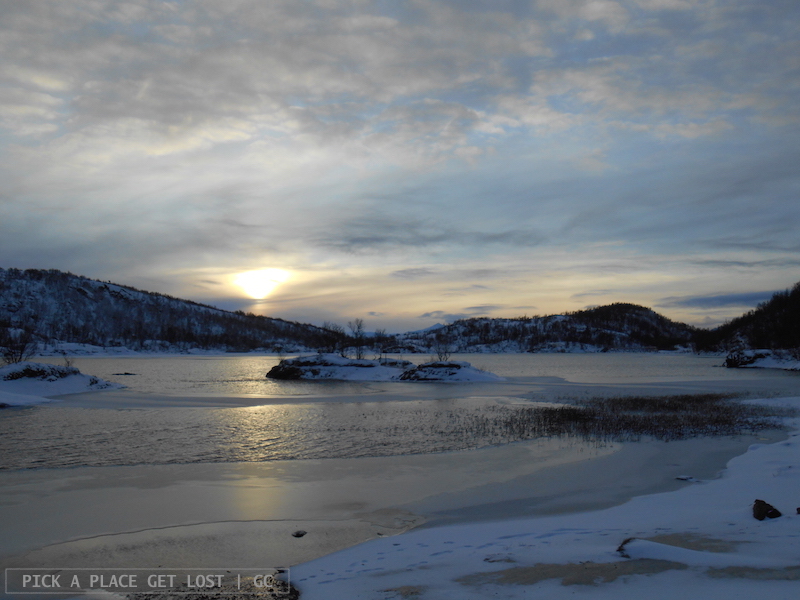 I walked along one side of the lake till I spotted a couple of signs. That is when I noticed the Keiservarden sign pointing toward the trail uphill. ‘Oooh there it is!’, exclaimed the tiny voice in my head, to which its stern counterpart replied: ‘Seriously, it’s time you went back, you’re going to be late!’. I pond-ered (again). Then I pond-ered some more.

Oh but the trail is just there, think how beautiful it is-

Let me get this straight: I did not make it to the very top of Keiservarden. I really didn’t have enough time, and little could my spikeless boots against the hyper icy rocks. But ohmygod the things I saw up there. 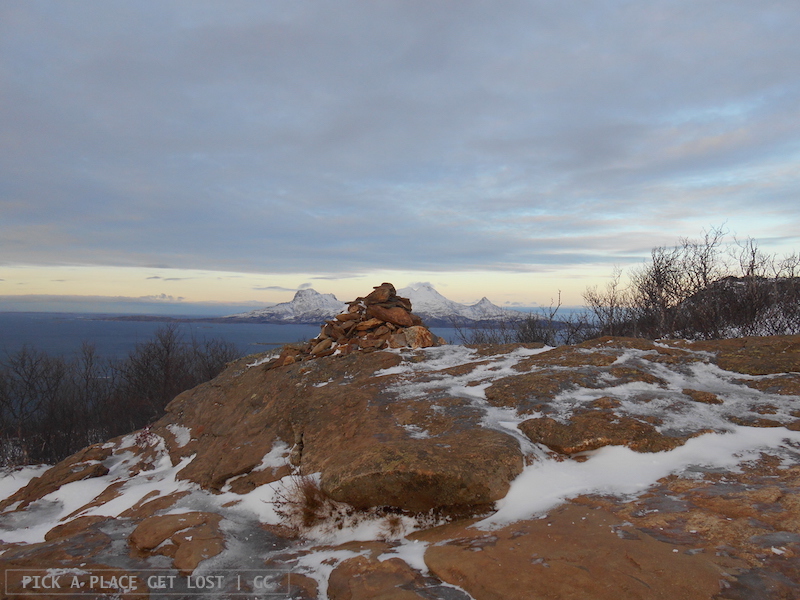 First the trail goes straight uphill through the trees. Soon, though, the trees disappear, and the terrain turns into rocks and flights of steps. And, yes, I do mean actual steps. In fact, when it comes to Keiservarden, two fun facts are especially worth mentioning:

1. The hill owes its name to German emperor Wilhelm II, who visited it in 1891. Keiservarden means ‘The Emperor’s Cairn’, which refers to the cairn (‘varde’ in Norwegian) built on top of the plateau to commemorate the emperor’ climb. (A cairn is a human-made stack of interlocking dry stones.)

2. The main path that leads to the hilltop is called Keiserstein. It has always been a super popular hiking destinations, which also meant over the years it’d gradually but increasingly wear out. In 2009 a special project was started, and Sherpas ‘borrowed’ from Nepal (re)built the path using stone steps made from a local stone similar to that from Keiservarden itself. Keiserstien was then successfully reopened in 2016.

(Fun fact within the fun fact: Nepalese Sherpas have contributed to (re)building a number of hiking trails and routes in Norway so far.) 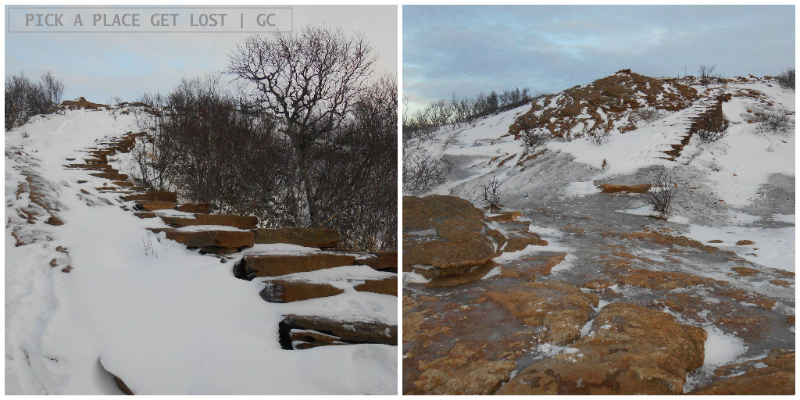 Keen as I was to make it to the very top, I realised I was objectively running out of time, plus I did feel my boots didn’t have the best grip on the icy stones. So yes, I had to go back.

It is true, though, that the farther you hike uphill, the more amazing the view gets. Keiservarden might not be the highest peak in the area (let alone in the whole of Norway), yet the view you enjoy from up there is truly mesmerising: there’s the whole of Bodø, the Salten region, Vestfjord, where Landegode Island rises out of water with its unmistakable pointed tops, and Lofoten. Enough said. 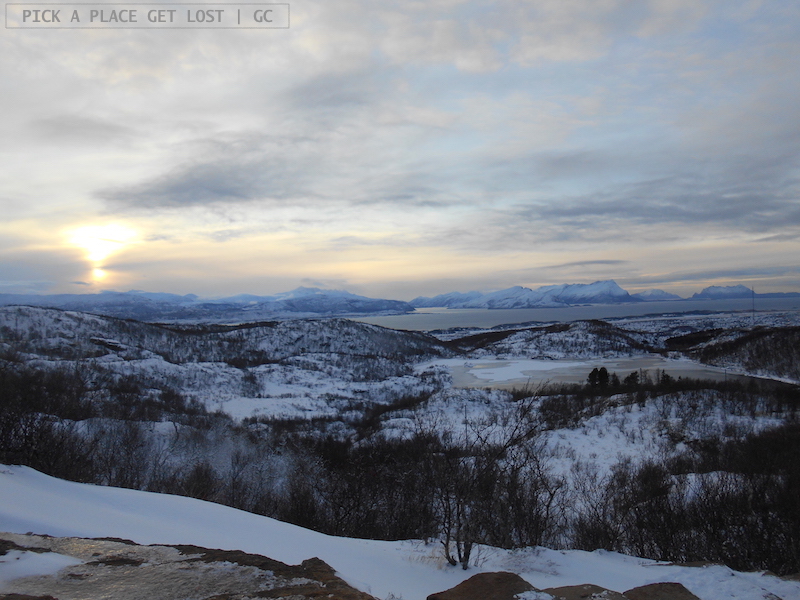 On my way back to the centre, I bumped into a large, fluffy red cat sitting on the pavement by the main road. When he spotted me from across the road, he ran toward me as if recognising a familiar face, and started rubbing his head against my legs. I stopped there with him for a while, but when I made to leave he followed me. I patted him some more, then some more, then… He kept following me. ‘Okay’, I thought, ‘that’s it. I will miss my flight now.’ I could see myself showing the cat door to door around the neighbourhood in search of the legitimate owner. He wouldn’t let me go.

I gave it one last try. He looked away for a microsecond, and I made a sudden move, trotting off down the pavement as fast as I could without looking back. When I threw an inconspicuous glance back, he was (thankfully) still there, basking in the (pale) sun and contentedly sitting in the snow. Pheeew. 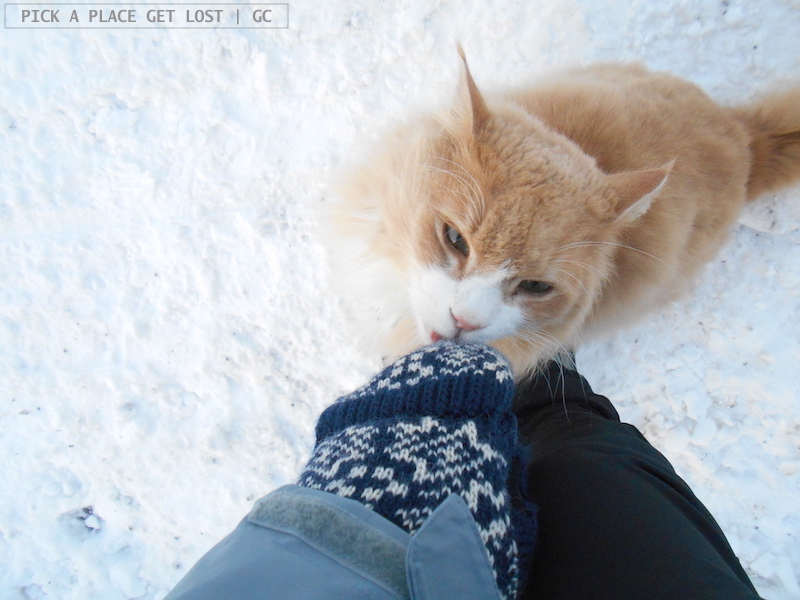 I did make it back to my hostel early enough to pick up my backpack and take my time to go to the airport. Despite icy Keiservarden and the red cat, I knew for sure I wouldn’t miss my flight, after all, which came partly as a huge relief. Partly.

Mount Rønvik and Keiservarden are proof that the Arctic landscape in winter is utterly mindblowing in its uniqueness and beautiful beyond imagination. And I truly, genuinely miss it. 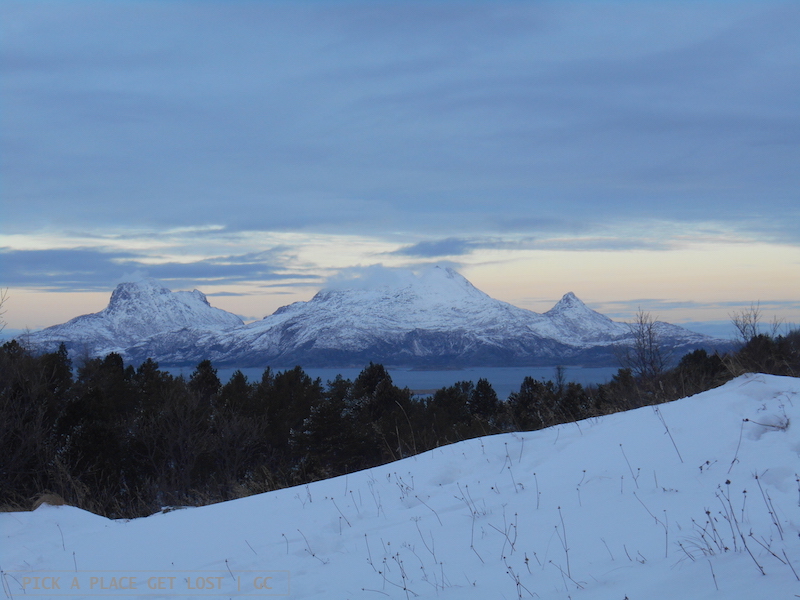