How to get from Boryspil Airport to the city centre and how to order food at the restaurant and feel like Jonathan from Everything is Illuminated. It happens in Kiev!

1 Sept 2017. I’d like to say that I can easily squeeze 48 hours of Kiev into one single post, but really, I’m not even attempting to make such a proposition.

We flew out of Budapest and landed at Boryspil airport around 6pm after the smoothest flight (2 hours and 40 minutes of solid sleep, could it get any smoother?). As we headed to the bus stop, the air already had that late-afternoon hue that casts a golden light on everything around.

I won’t dwell on the bus journey itself, on how bumpy it got from time to time, and on how abnormally loudly the kid behind us kept screaming and crying The. Whole. Time. We will never uncover the source of such desperation. Meanwhile, we were sitting at the very front of the bus, and at some point we crossed a bridge over the Dnieper, and I glimpsed the city skyline out of the window. ‘We really are in Ukraine’, I thought.

Almost an hour later (quite unbelievably the traffic was sort of reasonable, despite the rush hour), we made it to the train station. 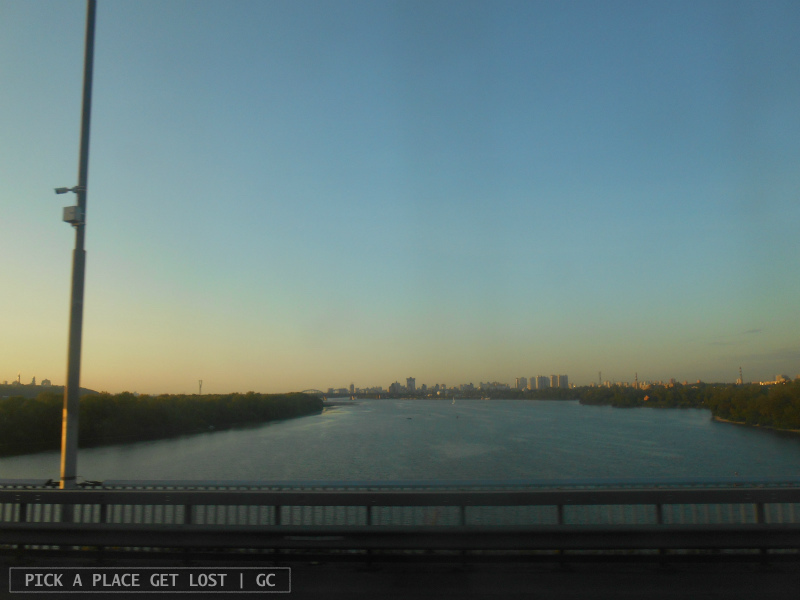 Kiev. bus journey from the airport to the train station 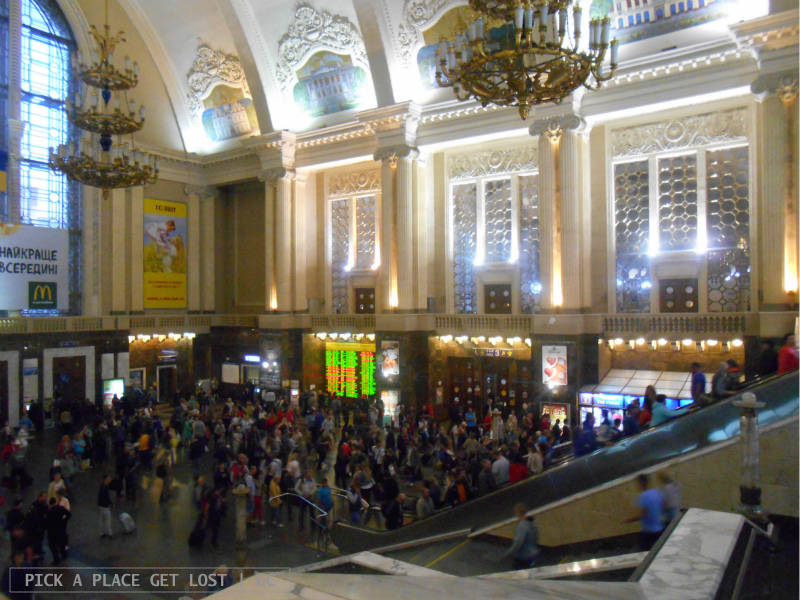 We then took the underground, but I won’t dwell on that journey either, except for the random conversation we had with a middle-aged Kievite who could hardly believe we’d come all the way from Italy to visit Ukraine. We tried to get the message across that we lived in the Czech Republic, which meant Ukraine was not that far after all, but I reckon the information failed to reach the recipient.

She was very friendly and interested in what we did, though, which felt a bit like when we boarded third-class trains back in Russia, and locals heard us speak Italian (or English) and wanted to know everything about you, your country, mafia, Rome and what-the-hell-are-you-doing-in-Russia-for-the-love-of-God?

Our hostel was off Kontraktova square (Контрактова площа), up Andriivskyi descent (Андріївський узвіз). We got there on a Friday night, and the square was crammed with young people playing music and hanging around. It was also packed with stalls, due to some weekend market/fair, which made it a bit disorienting to find our own way as we exited the underground. Another middle-aged Kievite carrying shopping bags took us almost by hand to our street. That’s how kind she was. 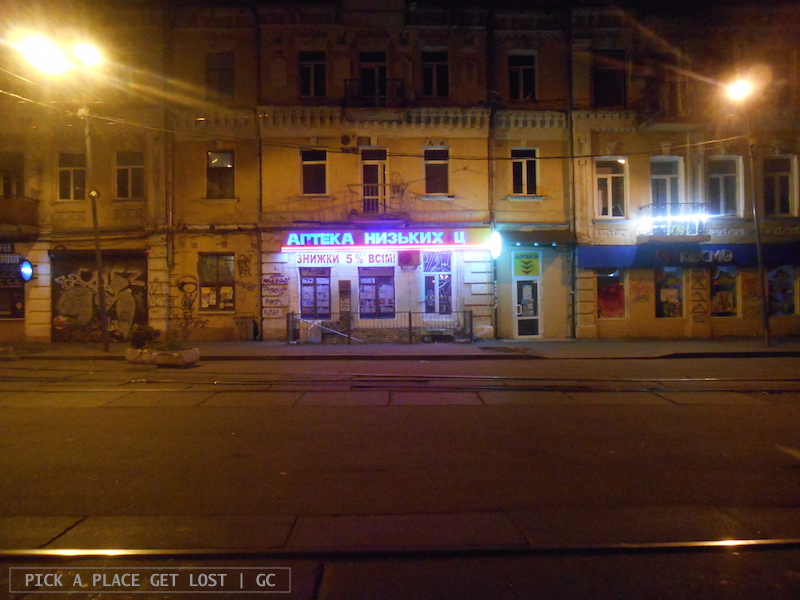 After hastily dropping our backpacks in our hostel room, we rushed back to Kontraktova. We were starving, and had spotted a few restaurants there. We picked one, got the menu and in one-two-three were ready to order. The only vegetarian option was a salad, which was fine: one whole option, yay! ‘I’ll also have a portion of potatoes, any kind is fine, thank you’, I told the waitress.

‘No, the potatoes only come with the meat’, she replied flatly.

‘Oh, so, but… but couldn’t she just have the potatoes without the meat?’, timidly attempted Bobby.

You see, when you read and/or watch Everything Is Illuminated, THAT scene (the potato scene) is always and invariably one of the most memorable. It’s one that makes you laugh, but you don’t think you will ever experience it yourself. Well, there you go. How could I argue with the waitress? If you’re even remotely familiar with Russia, Ukraine and the area, you know that in some cases there’s no point in trying to make a point. Ukraine is not Russia, mind you, but some patterns are undeniably similar.

‘I’ll just have the salad, thanks’, I replied.

Okay, we waited forever, it was almost eleven, and we’d had breakfast at 4.30 in the morning and the sandwich at Budapest airport at 2. We were hungry and exhausted, and we still hadn’t even got our beers or even a trace of cutlery or anything else.

I eventually snapped. ‘Let’s go’, I told Bobby. ‘Come on, let’s go to some other place, we’re never going to get any food here.’ The place was half empty inside and outside (where we were sitting), and all those that had arrived after us had almost finished their food and drinks. No waiters around.

Okay, I’m not proud of what we did. We grabbed my bag and ran out.

Fifteen minutes later, we were sitting in the bar across the street, too busy sipping our beers to even talk. We were eating fries (potatoes, yaay!), I was crunching fried cheese balls and Bobby was having sausages. It felt (and tasted) good. 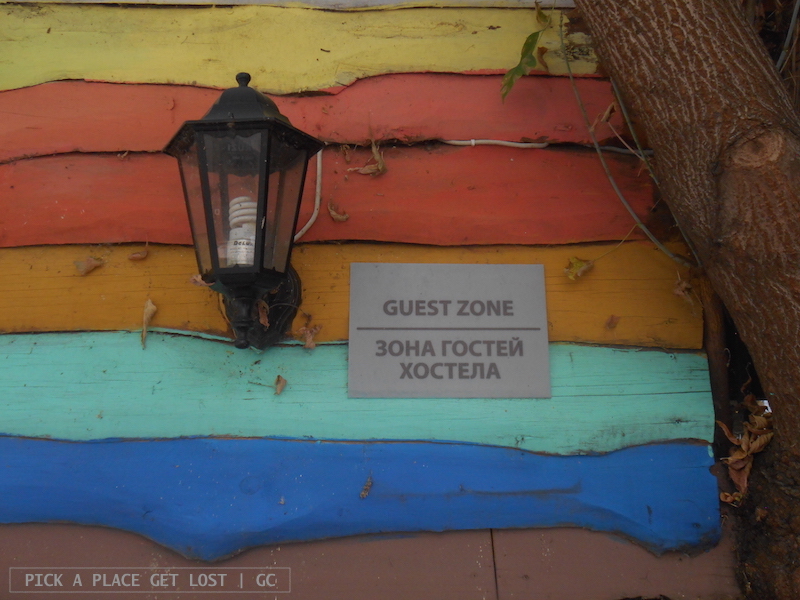 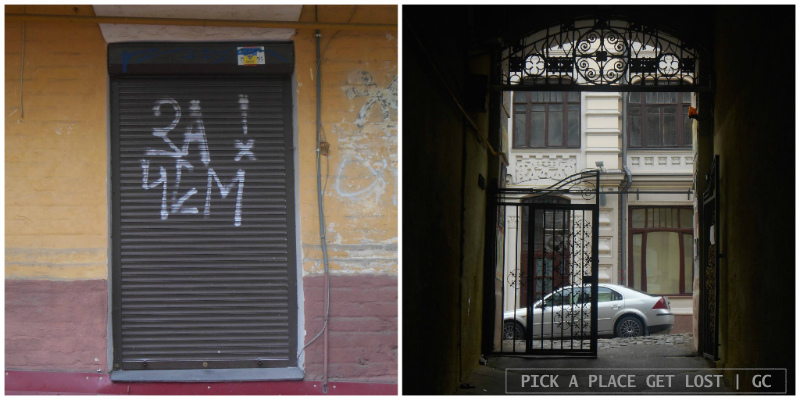