Chapter 1 of our one-day tour around the Chernobyl Exclusion Zone: entering the Zone, walking through the abandoned village called Zalissya and visiting the (actual) town called Chernobyl.

3 Sept 2017. We were super lucky that we managed to book a convenient tour option, i.e. a one-day semi-private visit that ended up to be a private one. Just the two of us, plus the guide and the driver. At 7.50 on a bright September morning ‘our’ car was already waiting for us in front of our Kiev hostel. Ready set go.

The Exclusion Zone is located around 110 km north of Kiev. After we left the capital, I don’t think we drove through any other urban entity that could rightfully be labelled as ‘city’. There were villages, the odd bunch of wooden houses here and there, lonesome bus stops randomly scattered along the road, and the occasional local standing by the road, waiting for a bus or a private car to pick them up. The rest was all blue sky, cornfields and a few isolated houses that made the connection with Everything Is Illuminated even too immediate. 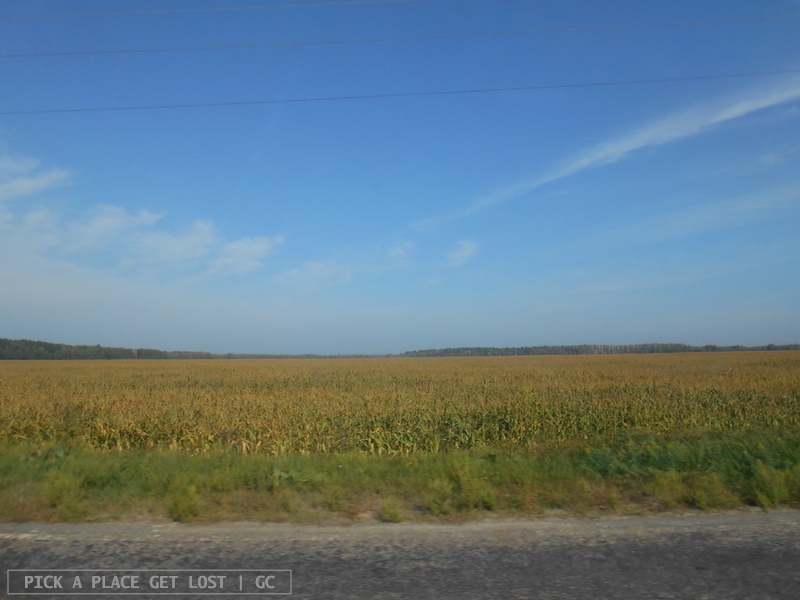 The checkpoint by the main entrance is the first in a number of checkpoints you might have to go through during the visit. Soon after we got off the car, we noticed several groups already queuing by the checkpoint, ready for the standard passport control performed by the soldiers monitoring the gates.

That was also when a blonde, bright-eyed young woman came over to our van introduced herself as Yulia, our guide. She then briskly trotted off toward the checkpoint, where she got us to skip the queue and have our passports checked before all the groups. Wow. The soldiers stepped aside and let us in, while our driver drove the car past the gates. We then got back into the car and Yulia handed us a waiver to sign, and gave us a rough idea of the itinerary for the day. Then we zoomed down the main road of the 30-km Exclusion Zone. 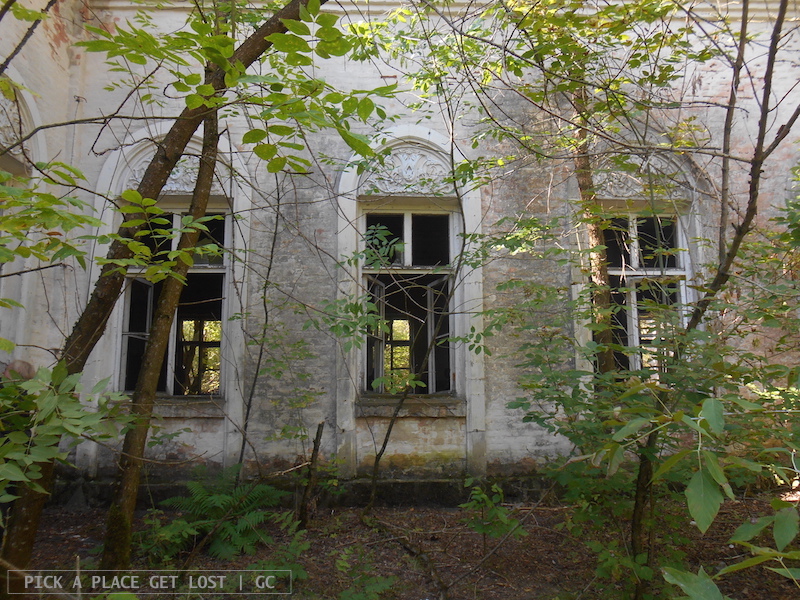 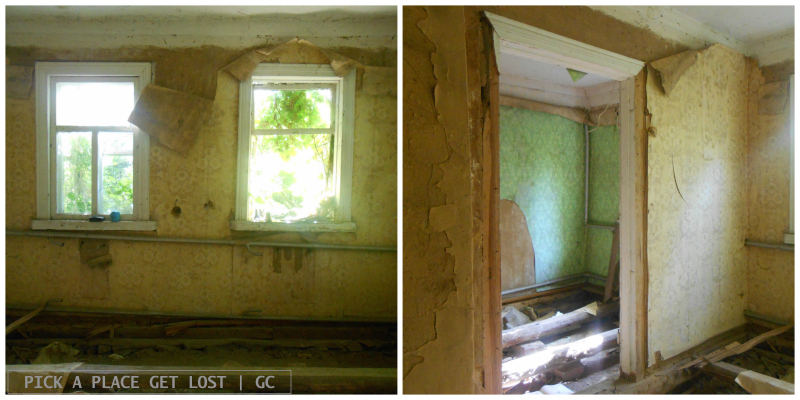 The first stop is a village called Залiсся (Zalissya). We got off the car (our driver would be waiting there for us), and moved over to a monument erected a few metres away, which celebrated soldiers fighting in World War II. Then Yulia said: ‘Okay, now let’s go and have a look at the old farm’, and she disappeared into the woods.

The ‘farm’ used to be a small collective farm in the Soviet meaning of the word, i.e. a kolkhoz (колхоз), based on joint ownership and shared agricultural production.

We walked down what looked like a footpath in the forest. All around us were bushes, trees and the earthy ground, with the odd wooden, one-storey building peeking through. We stopped by one of them, and went in: what remained of the door was wide open anyway. The room was empty but for the remains of what looked like a counter of some sort, while the floor was half-covered with debris, the walls all peeled out. 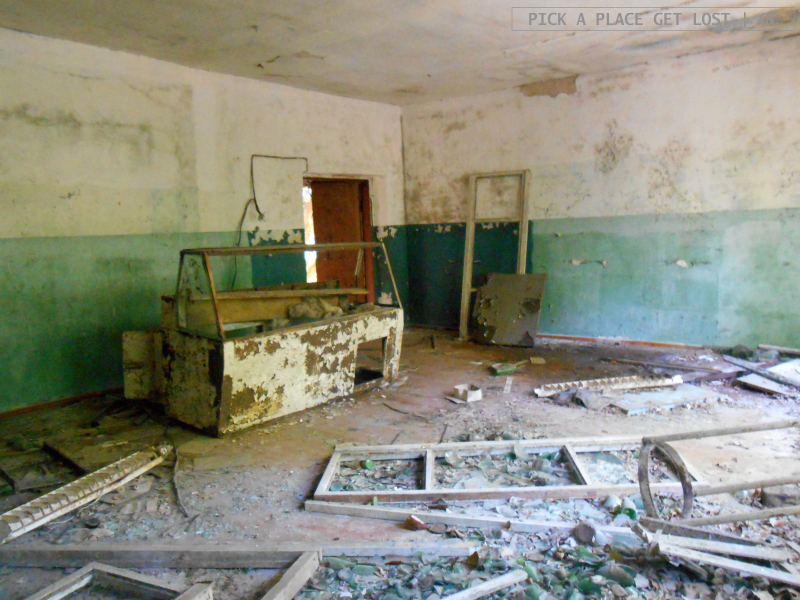 Yulia told us it was a shop. A shop. And there were more of them around. People lived there, and walked that street (yes, it was an actual street) every day, and bought food and other products from the shops. They even drove cars down that road, as an old Zhiguli (Жигули) car ‘parked’ outside a house seemed to want to remind. The car looked like it had been gutted by fire. In fact, as everything else, it had been gutted by time – which, clearly, can produce a very similar result. Everything in the Zone is as it was left in early May 1986, when the evacuation began. Apart from the occasional ‘unofficial visitor’ rummaging through things, all has been left untouched. 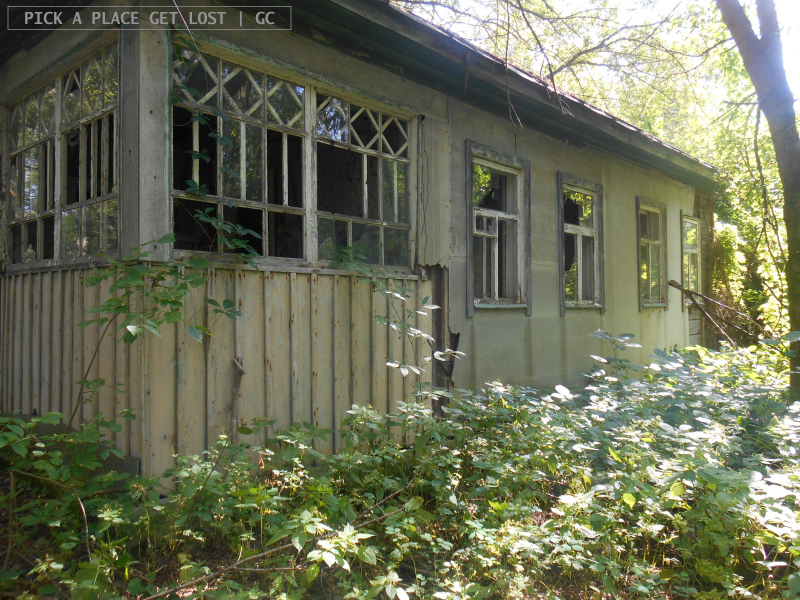 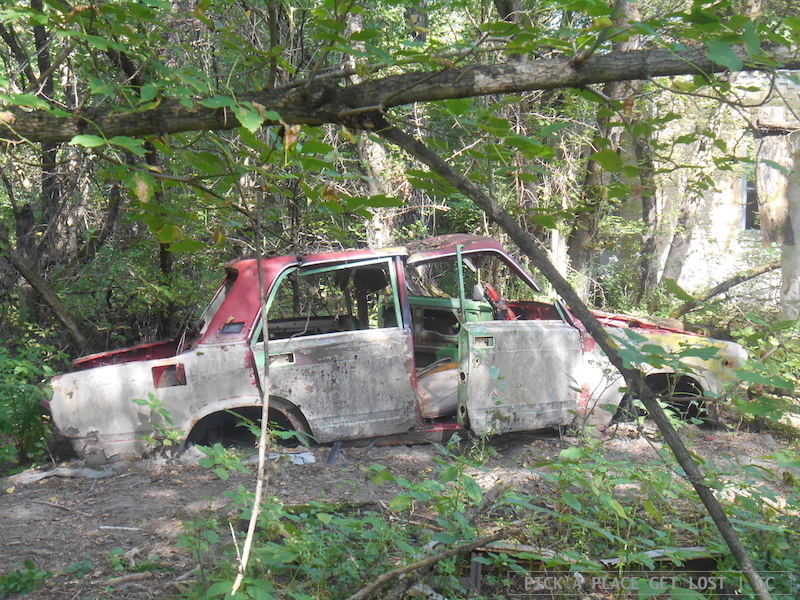 A bit further on down the path, we entered a white concrete building with a temple-like façade. It was the House of Culture. There used to be a House of Culture in almost every town and village: it’s where throughout the year meetings and events would be held on a regular basis and with a daily dose of propaganda, as the main hall of the Zalissya building seemed to point out. The room itself was all derelict and dusty, but you could still make out the ‘inspirational’ quote above the stage, which read more or less: ‘Long live Communism – A Bright Future for all Humanity’. 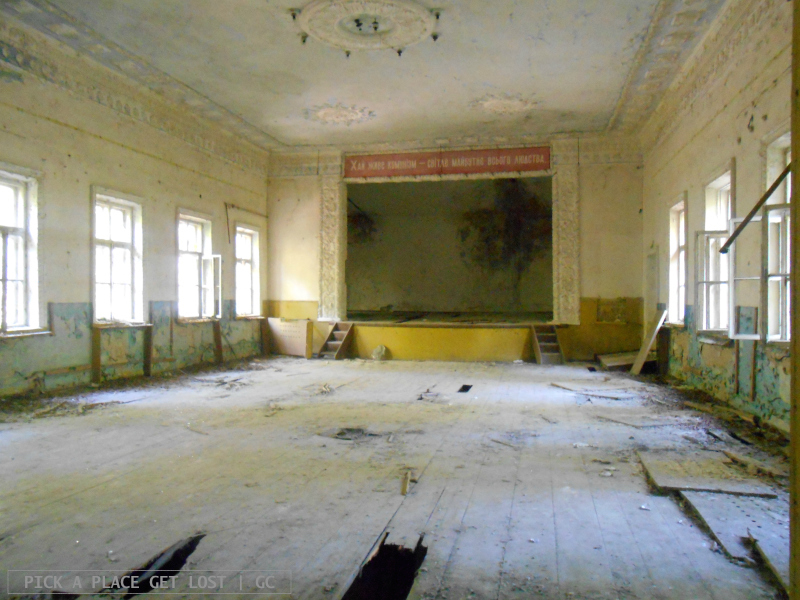 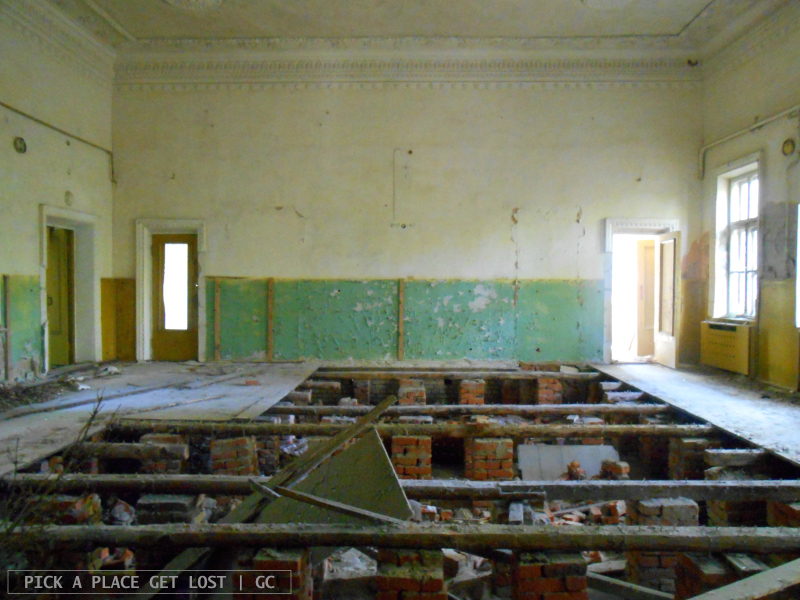 I guess it takes a while (and a few clarification questions, if necessary) to realise how the Zone visit works. At some point, though, a basic strategy dawns on you: always and invariably picture things in your head as they were. True, it takes a good amount of imagination, but it also has an eye-opening effect. At least, that’s how it worked for me. Seeing things as they are now is striking, to say the least, but if you keep in mind that those places were inhabited, that there was life all around, that’s when the ‘striking’ becomes ‘mindblowing’ and you get the actual extent of it.

No sooner had we got back into the car than we had to get out again. We were standing by the Chernobyl entrance sign, i.e. a blue writing on a white-brick ‘wall’, also displaying a stylised version of the plant. Just there and then, we also happened to notice a long, snake-like pipe running high above the street and then swerve downwards toward the grass, but always above ground. The pipe was largely wrapped in something akin to tin foil. Yulia must have read the puzzled looks on our faces, and explained that after the explosion they started building overground pipes for security reasons, i.e. to avoid the contact with highly contaminated soil. 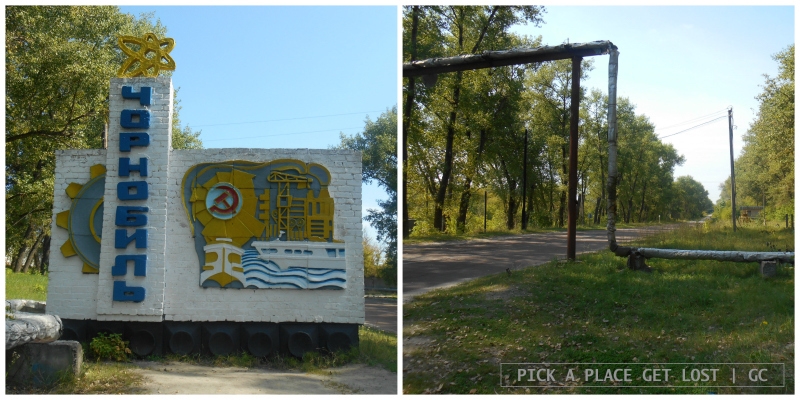 And by Chernobyl I mean the actual city, which in my previous post I repeatedly called ‘Chernobyl itself’. You get to spend quite a while around Chernobyl as part of the tour, not because you visit a large portion of the city, but because there’s quite a high concentration of key spots in a relatively small area.

We stopped by the ‘Ukraine State Agency on the Exclusion Zone Management’, which, as I mentioned in my previous post, also deals with the management of guided tours. Right next to it is a statue of Lenin, and not just one in a number, but the only Lenin statue in the whole of Ukraine still standing, all the others having been taken down. 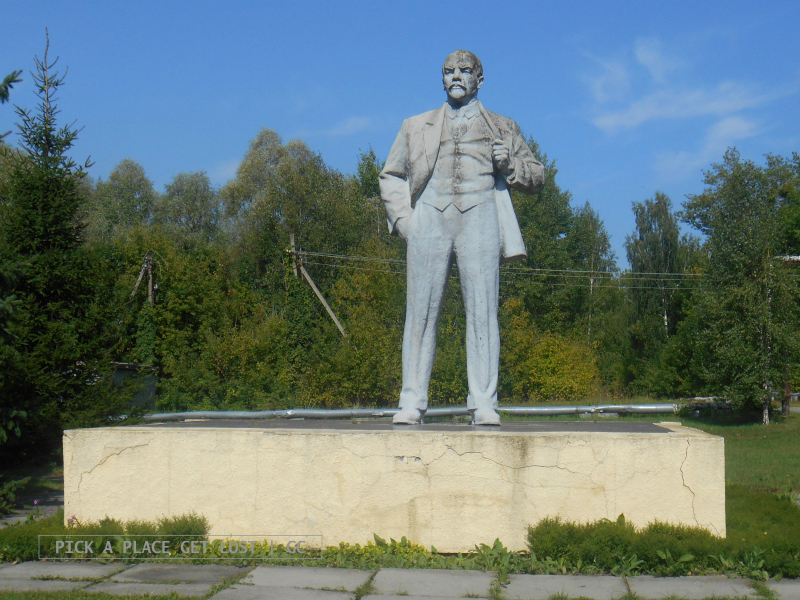 If you look left while facing the statue, you will see the actual ‘beating heart’ of Chernobyl. There’s an earthy footpath running in the middle of a meadow. The path is lined on both sides with street signs of the 160-something villages, towns and cities directly impacted by the explosion (and therefore evacuated). On one side of the sign the place name a red slash across it.

As you will notice, some of the signs are painted black (the city/village name in white), while others are white (name in black). Funny story: all the signs were initially supposed to be black, but oh the irony, too soon did they run out of black paint, and they had to leave the others white. I don’t know if, reading between the lines, it means that they didn’t expect there to be so many of those signs, although in fact they did know how many urban entities were to be listed out on them. But then, it is the same for visitors: you know it was a huge disaster, yet such a long lists of place names you wouldn’t expect to read through. 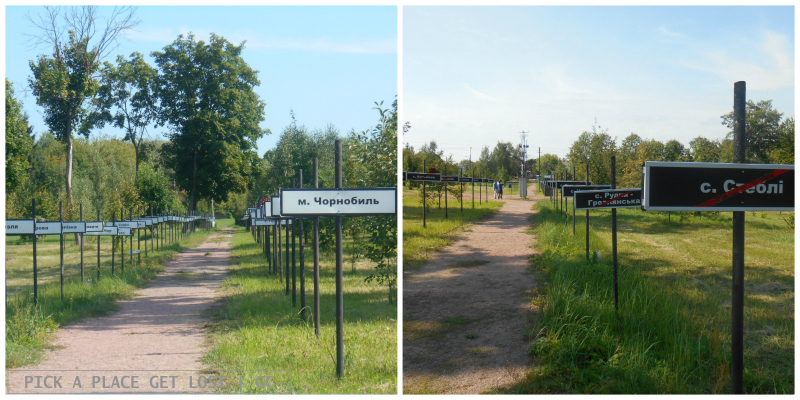 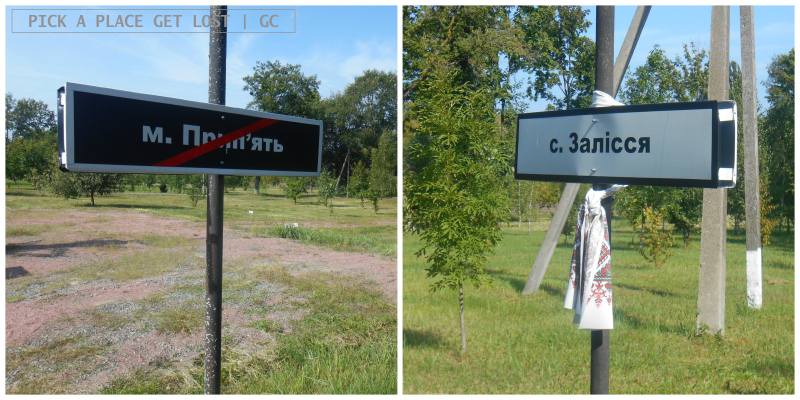 In the same grassy area there are a few other sculptures are displayed. Amongst them, you will see a joint Ukrainian-Japanese monument that commemorates both the Chernobyl explosion and other, similarly catastrophic events (namely the Hiroshima atomic bomb in 1945 and the Fukushima nuclear disaster in 2011). The main body of the monument consists of two paper cranes (made from metal), which, as I learned, are a powerful symbol of the movement for a world without nuclear weapons. Coincidentally (or, more likely, not), our driver also had a tiny paper crane dangling from the rear-view mirror of the car. 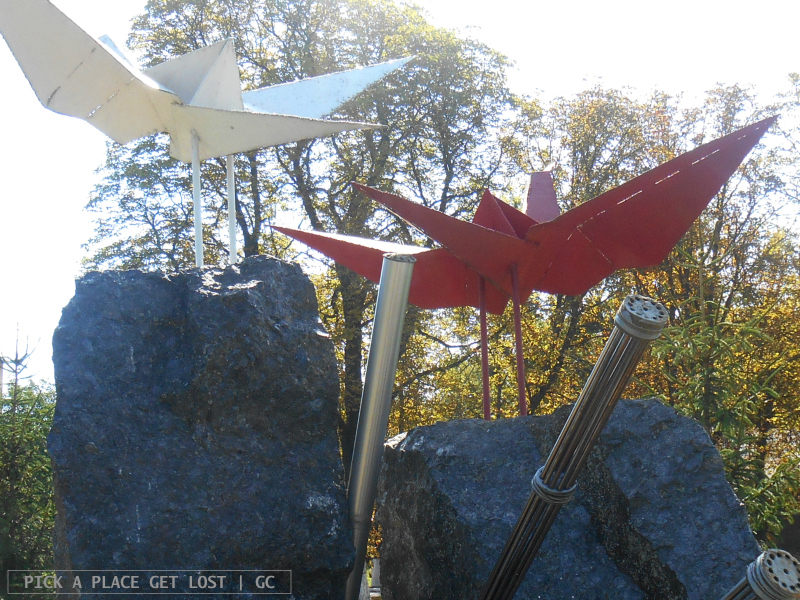 Halfway down the ‘corridor of signs’ you encounter a number of Soviet-looking mailboxes, which still serve their original purpose, while at the very end what you find is the iron sculpture of a trumpet-playing angel and, level with the ground, a very large white, Zone-shaped slab, where the 30-km and 10-km areas are marked and where each city, town and village is also marked by a candle-holder. Every year on 26 April celebrations are held in Chernobyl, around that very monument (imagine the white slab all lit up by candles in the dark) and in the museum across the street from it.

But the street signs, those are something I won’t easily forget.

After getting back into the car, we stopped briefly at the small shop/food store (магазин), which, by the way, sells exclusively products imported from outside the Zone. While our guide and our driver popped out for a coffee, I noticed the high number of dogs populating the area. I had only spotted a few of them till then, one when we stopped by the farm and a couple of others on the side of the main road. Now there were several of them around the shop, though, and we would see more of them during the day. As Yulia then told us, the number of dogs was steadily increasing over the months and years, so much so that measures (i.e. sterilising the dogs) were taken to prevent the situation from spiralling out of control.

A bit further on, we stopped by a more solemn-looking monument that commemorates the hard work and efforts of the ‘liquidators’ (лiквiдатори in Ukrainian), i.e. civil and military representatives that took immediate action when the explosion took place. Apart from the two dogs seeking shade underneath the monument, it does have a solemn feel to it. What struck me most is the stark contrast between the image of strength and resistance it conveys, and the apparent fragility it displays, what with the grey of its colour making it look like made from clay. 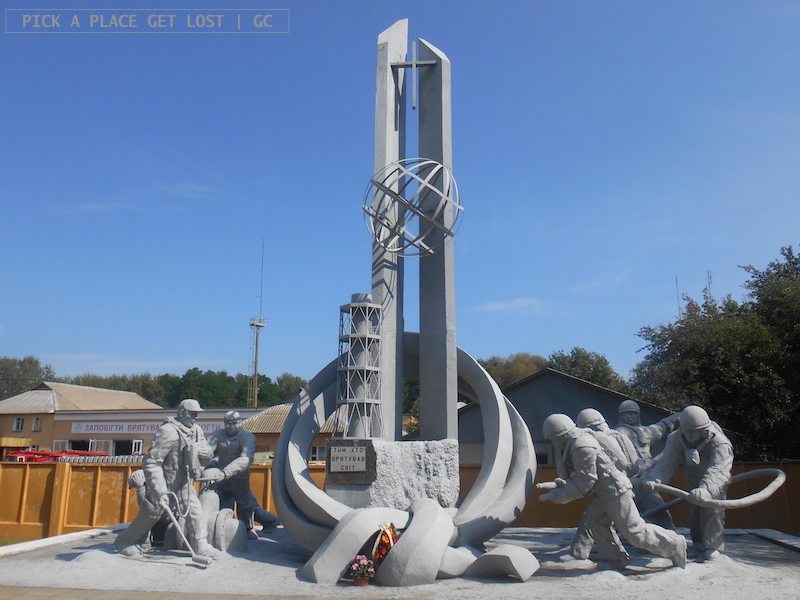 Chernobyl. Monument to the liquidators 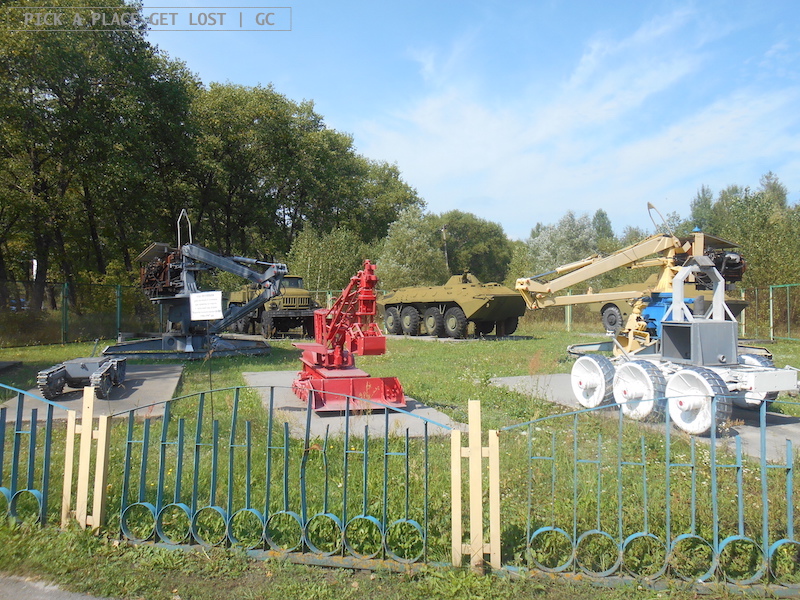 Not far from the monument is also a display of machinery and vehicles that were (and in some cases, are) used to cope with the ‘after-accident’ (e.g. to remove debris or carry materials away from the plant). They come in bright colours and funny shapes and, as reads the poster by the fence, they were borrowed or donated from a number of countries all over the world. It’s funny how, at first sight, they closely resemble large-scale toys one used to play as a kid. You soon learn, though, that the bright colours are usually the result of repainting, and that the level of radiation they emit is dangerously high. That also explained why our dosimeters started beeping like crazy as we approached the fence enclosing the machinery display.

Back in the car. Next stop: Chernobyl 2.