I’m not one to always go back to the same place multiple times. With Babí Lom I’m happy to make an exception.

23 May 2017. What I like about this post is that it was born in real time, right where and when the events described occurred. In fact, throughout the day, while out and about at Babí Lom, I Facebook-messaged myself multiple times, telling myself (I wasn’t typing, I was literally recording messages to myself) random things I noticed along the way, and things I wanted to write about and dwell on at a later stage. So, because it all happened in real time, I’ll be writing about it accordingly, i.e. not recounting the events as they unfolded in the past, but as I’d have written about them while they were taking place. Because it makes sense, that’s why. 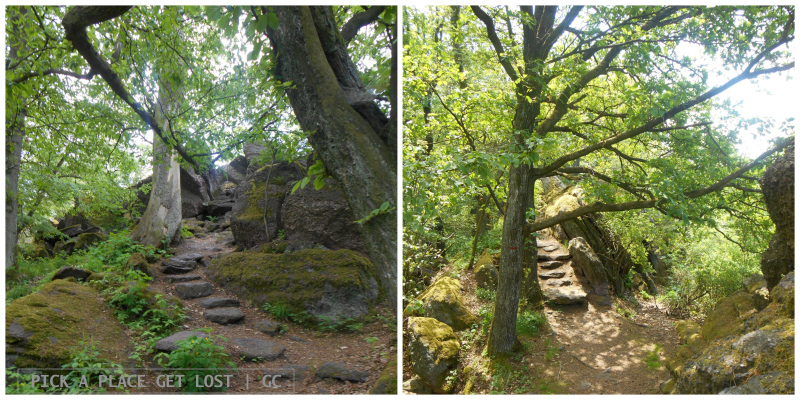 It’s fair to say that I’m not one of those people that tend to go back to the same place multiple times, at least not on a regular basis. Every rule has its own exceptions, though, and I suspected that Babí Lom might be one of these. So here I am, back in Lelekovice, to prove (or deny) my point.

Ten minutes up the main trail (the one going uphill, which I walked up last time as well), and I’m already amazed by the extent to which the landscape and the forest have changed since March. Any trace of wintery look is gone, replaced by the brightest shade of green. The trees are now so thick with leaves that two thirds of the trail are shady, almost enveloped in semi-darkness. 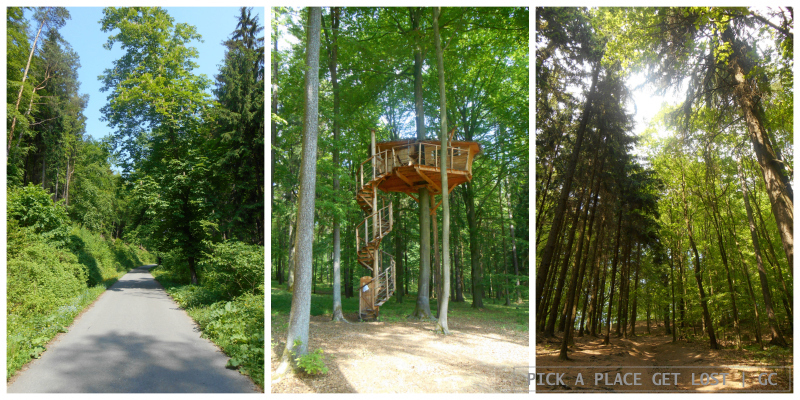 I reach the junction where, if you turn left, you go for the hilltop. This time, though, I keep to the main path, and finally get to see the ‘chata’, i.e. the tree house. I missed out on it the first time, but I know it’s a popular sight around Babí Lom, and I’m curious to see it myself. The house is just off the main trail, literally in the middle of the woods, yet it stands out (once you’ve spotted it), because its light wood is the starkest contrast to the dark brown of the tree trunks in the surroundings.

I head back to the trail and I do make my way to the hilltop now, while rumbling sounds in the distance announce an impending storm. I’m just about to wonder how it can possibly be thundering, being the sun high and warm, but I quickly dismiss the thought. Are you seriously going to be surprised if you are out hiking and it rains? Are you? (Clue: the answer is ‘LOL nope’.) 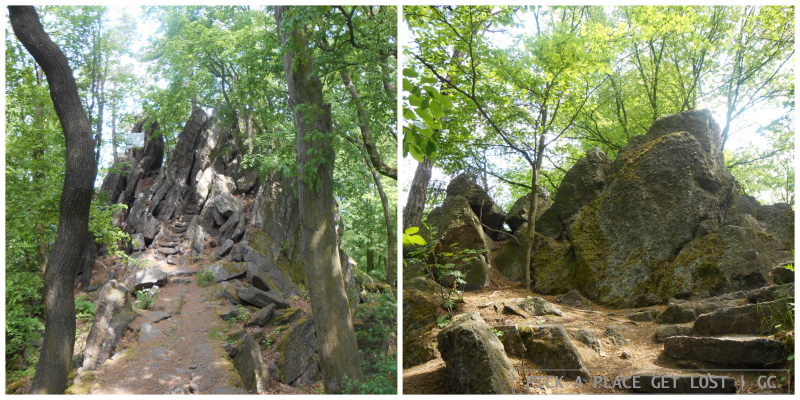 As soon as I reach the hilltop, instead of heading straight for the watchtower, I decidedly turn right. I reach what looks like a crafty but impressive staircase made with rocks, which leads up to the very top of Babí Lom. Wow! The treetops make it impossible to enjoy the view, but it still feels cool to be here. Plus, the scenographic impact of the rocky, Indiana-Jones-like steps in the wild is matched by the marble plaque placed on one of the rocks, which commemorates ‘the founders of the tourist facilities around Babí Lom’ (‘zakladateli turistických zařizení na Babím Lomě‘), Carl Ripka amongst them. 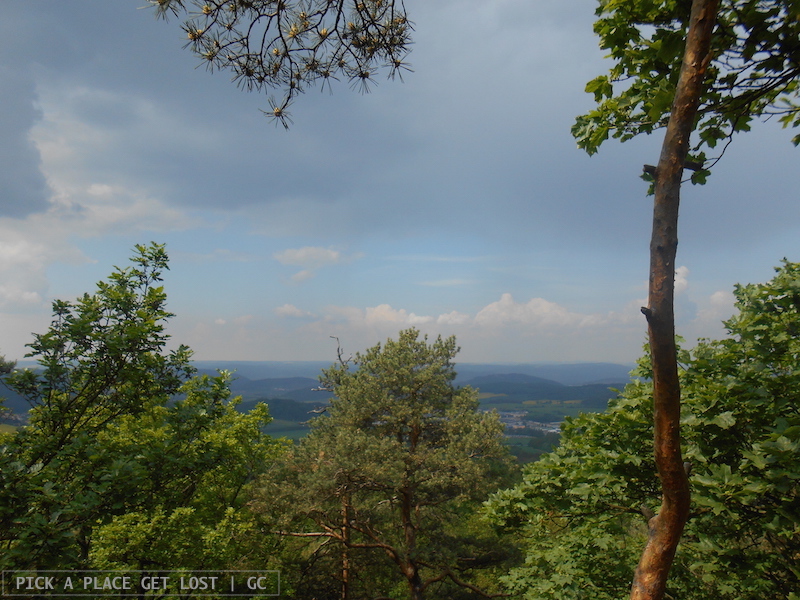 Oh and obviously that is when it starts raining. At first it’s only a few raindrops, then it’s drizzle, and then it’s actual and proper rain. I pace up as I make my way back to the main trail, now heading straight for the watchtower. A few minutes, and the rain stops. A few minutes, and it resumes. I’m standing on a flat, rocky spot when I stop and think. Suddenly I realise I’m wearing my usual green raincoat (which I’ve been wearing for six years now), and it feels exactly like two and a half months ago, when I first went to Babí Lom, and I was hiking this very stretch of rocks when it started raining hard.

It only lasts for a second, though, because as I look around, everything is so, so much greener than it looked back then. There are flowers blossoming on tree branches all around, and the smell of flowers and moss fills the air, and it’s nothing like it was in March. 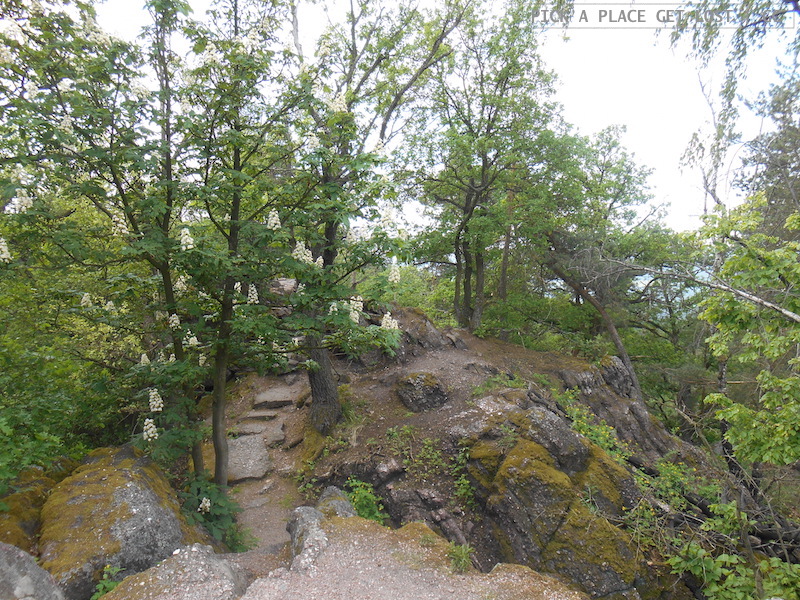 And I look at the view, and it’s as amazing as I remembered it, if not more. Except, the hills are now covered with broad patches of yellow, i.e. the fields of rapeseed. They look like stickers cut out and stuck against hill slopes that would otherwise be green and green ‘only’ (if green counts as ordinary in this case). Funny how a place can be the same yet look so utterly different, depending on the season.

To add to the picture, there is no one in sight, not a single person. The only sounds I hear are the leaves rustling in the wind and the raindrops drumming against my hood. So I’m just here, standing still on a rock, my eyes tirelessly roaming in all directions to make sure they don’t miss out on anything. And, really, the smell of rain remains, as always, one of the most pleasant. 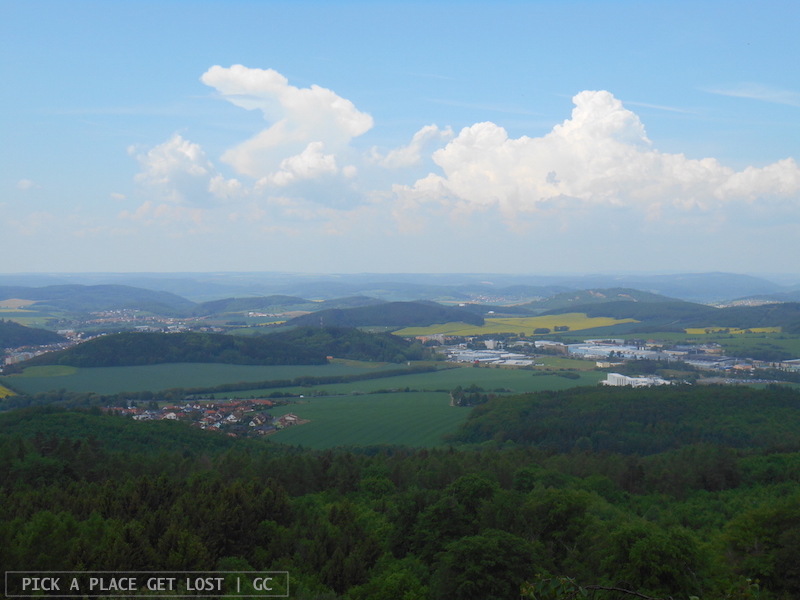 I remember how, when I wrote about the Curonian Spit in Lithuania, I said that it makes for a ‘multisensory experience’. Well, I can positively say that today’s hike around Babí Lom has been very much like that so far. Also, regardless of any other hikes I might go on around Moravia (which I hope there will be a long list of, at some point), Babí Lom will always be one of my favourite places. It’s grown into a friendly, familiar place, and it’s the first hiking area I’ve gone back to after hiking there for the first time. 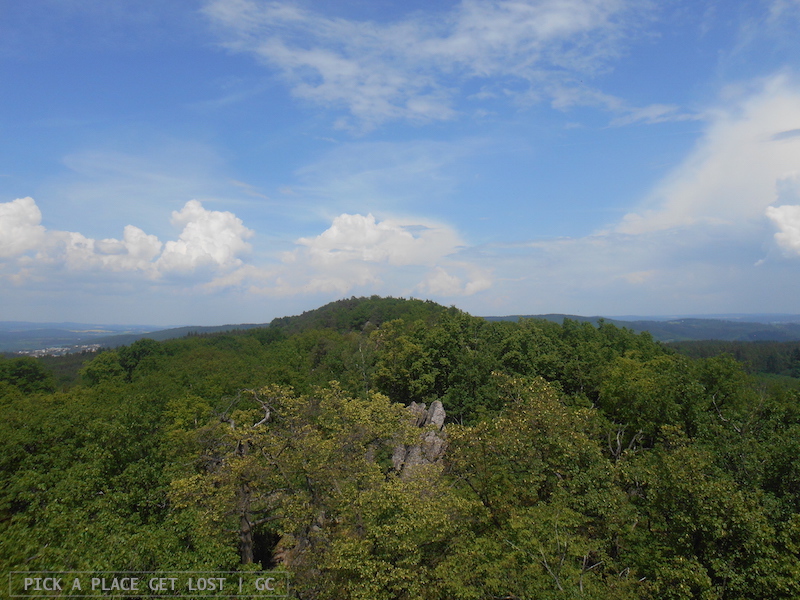 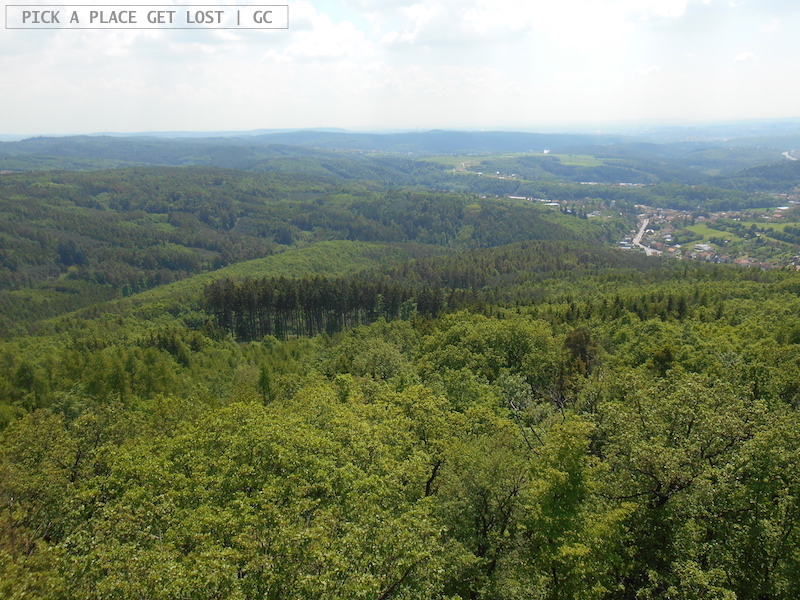 The turning point in my second Babí Lom hike occurs between one and two o’clock (I’m sorry I can’t give a more accurate time reference here), when, back at the main trail ‘crossroads’, I follow the ‘Brno-Řečkovice – 16.5km’ sign that points downhill. I’m going back to Brno on foot, I think to myself. I’m walking back to Brno. Yes, you’re walking back to Brno, a tiny voice replies. You don’t know what you’re doing, but it’s cool in its own way, the tiny voice continues. It’s too late to change my mind, anyway, and despite more rumbling sounds in the distance mean that there will soon be more rain. I’m walking back to Brno, how exciting is that? 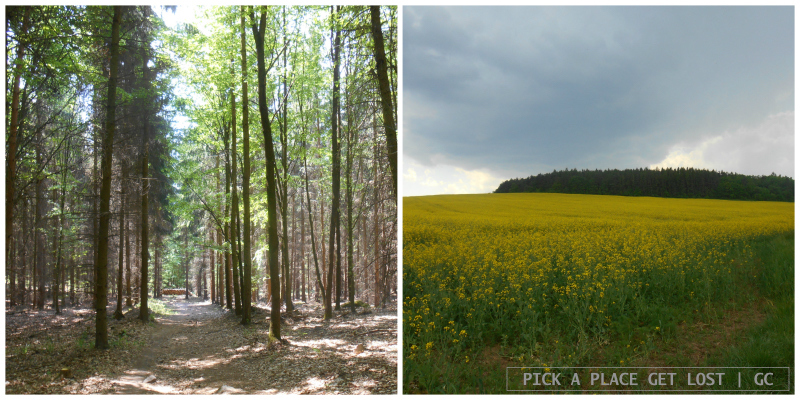 For a good hour or so I kind of know where I’m going. I mean, it’s all woods, pine forest and regular signs, which make me increasingly confident about the trail I’ve chosen. Then, suddenly, the trail is gone, the sky overcast, and I’m walking along what look like boundless fields of rapeseed. Seriously, wow.

After some more woods, I find myself walking on the edge of a road flanked by the greenest fields. Except, cars are racing past and I’m hoping I will be spared. Soon after that, I’m strolling down Tišnovská, which kind of makes me doubtful as to whether I’m heading back to Brno or I’m actually going to Tišnov instead – which name does ring a bell, as a couple of colleagues of mine are from Tišnov, so if I do end up there I know who to call to ask for directions. 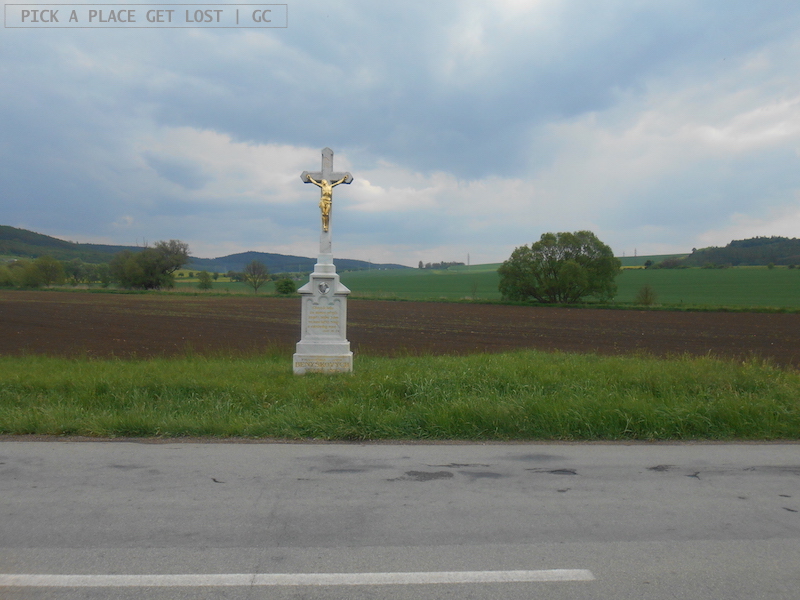 But no, here I am, walking past Kuřim train station (and where is Kuřim anyway??), and then crossing through a couple of tiny little villages (one is Moravské Knínice, and of the other I shamelessly cannot remember the name). I ascend another hill, which provides more breathtaking views (plus the sky is now clearing up), and then I’m suddenly in the pine forest again. The ground is muddy, but beautifully dark because of the fresh rain, and the sun peeking through makes the earth glisten beneath my feet.

I’ve no idea where I am, I haven’t spotted a sign in a while, and my phone has a low battery and no signal. It’s already 4 o’clock. 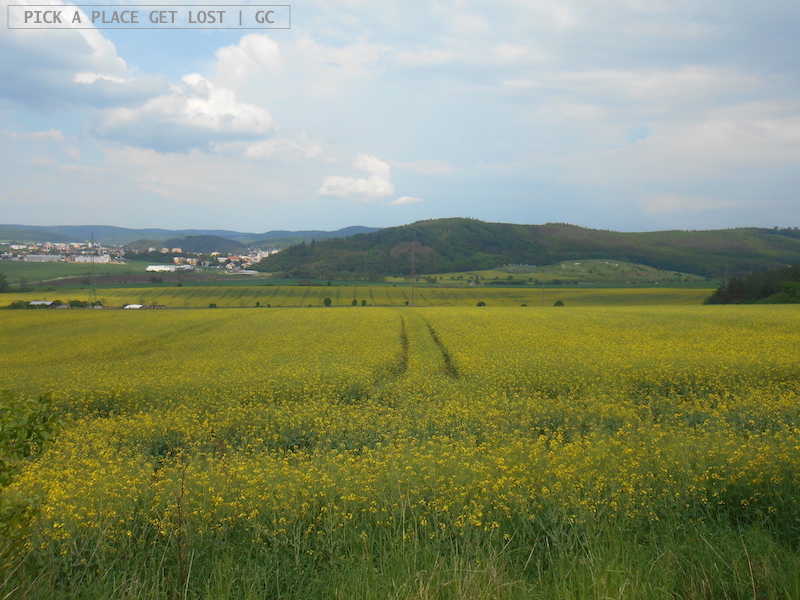 Luckily enough, I do come across more trail signs at some point, and learn that Řečkovice is 6 km away. These 6 km, as it turns out, consist entirely of the following:
– more stretches of forest thick with trees whose leaves are still heavy with raindrops;
– more green fields and green hills which seem to match perfectly the now mostly blue sky only partially covered by harmless, fluffy white clouds;
– well, that’s basically it, apart from the odd variation on the theme.

One minute I’m surrounded by trees so tall I can barely glimpse the sky above my head, and the next I feel like I’m walking through some large-scale Windows desktop theme whose colours are too bright to be real. Except, everything is.

I wish I had someone to share the view with, yet I’m selfishly content with savouring the unspoilt nature and silence all by myself. 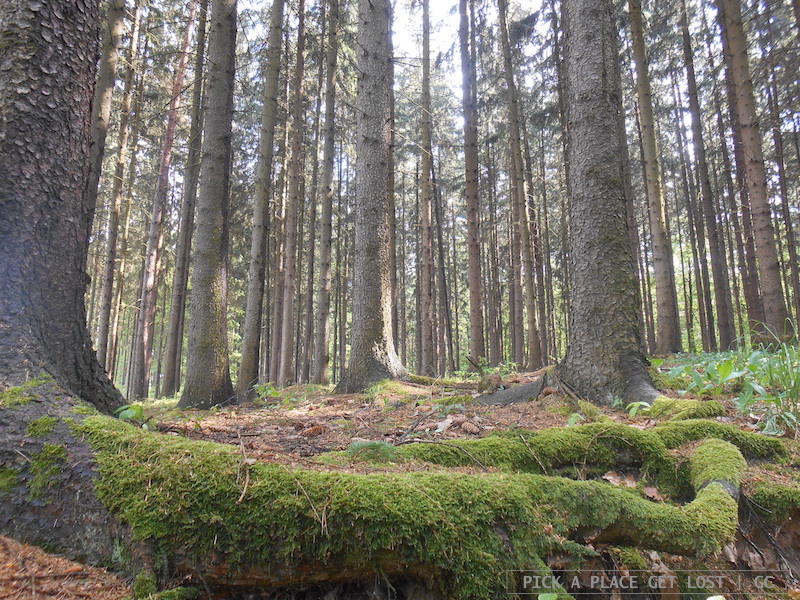 It takes me a (long) while, but I eventually do manage to reach the Řečkovice tram stop. I guess I’m mildly knackered, half soaked and half sunburnt, and excited beyond words. But my Mum rings me up as I’m waiting for the tram, and I help her solve a geometry problem my 11-year-old niece is struggling with, so it can’t be that bad, can’t it? 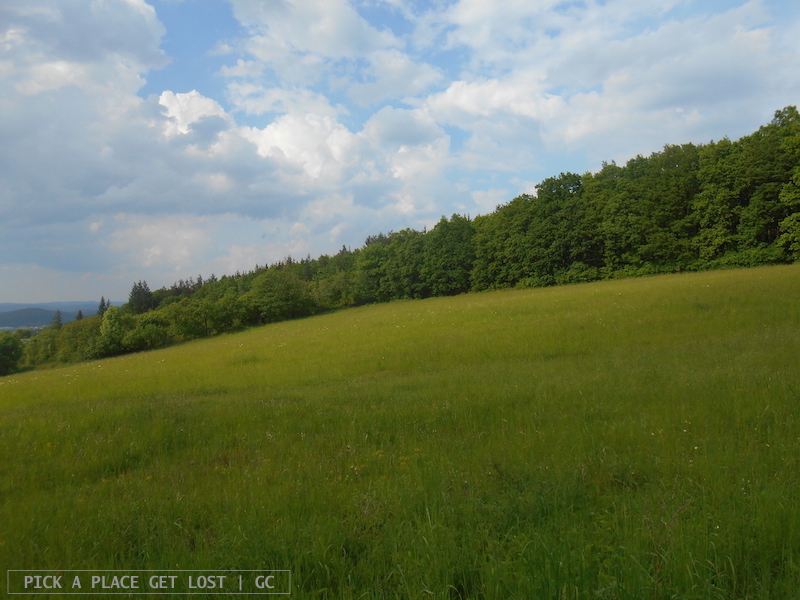 Sitting in the tram, as I head back to Mendlák, I recollect the events from the previous eight hours: the trail uphill, the treehouse (finally!), the actual top of Babí Lom, the watchtower (2.0), the 16.5km-sign, the forest, the yellow fields, Kuřim, Tišnovská, Moravské Knínice, the second forest, the Veverská Bítýška and Jinačovice signs, Velká Baba (yet another forest, yes) and then, unbelievably, Řečkovice. After hiking and walking a non-specific amount of km (most of which not having a clue as to where the trail would take me), I can quite positively say that my attempt to prove that Babí Lom was an exception to my rule has worked out pretty well.