Story of how I went to Hády, outside Brno, walked to Hornek viewing spot, reached Údolí Říčky, and ended up at Marianské Údolí.

30 May 2017. If you’re on any high floor of any Brno multi-storey building, like those modern, glossy office buildings all glass walls and shiny panes, and you stretch your gaze out into the distance, most likely you will see hills. Hills everywhere. They might come in different variations – from bare and rocky to leafy and green – but really, that is mostly what the Brno ‘skyline’ looks like.

To the eyes of the inexpert observer (to which category I humbly ascribe myself), all (or most) of them must look, if not alike, at least fairly similar to each other – at least, that would be the impression I also got. All but one. Yes, because there’s this one hill that’s nothing like the others, one I’d always been super curious to go and stand on top of at some point.

I see that hill every day from the office floor. I’m sitting at the desk, and if I look up I see it without the least effort. It kind of looks like a rocky, yellowish amphitheatre with a kind of semicircular perimeter and an imposing-looking antenna tower on top. That was the one hill I’d be able to recognise since day one in Brno. At some point I told myself that one day I’d go and see what it was like up there, and I’d be standing on top of it and enjoy the view. 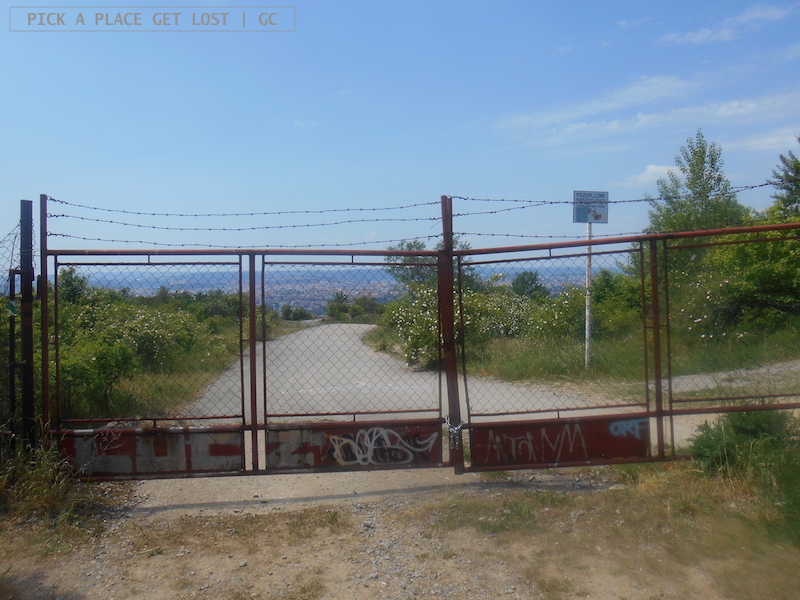 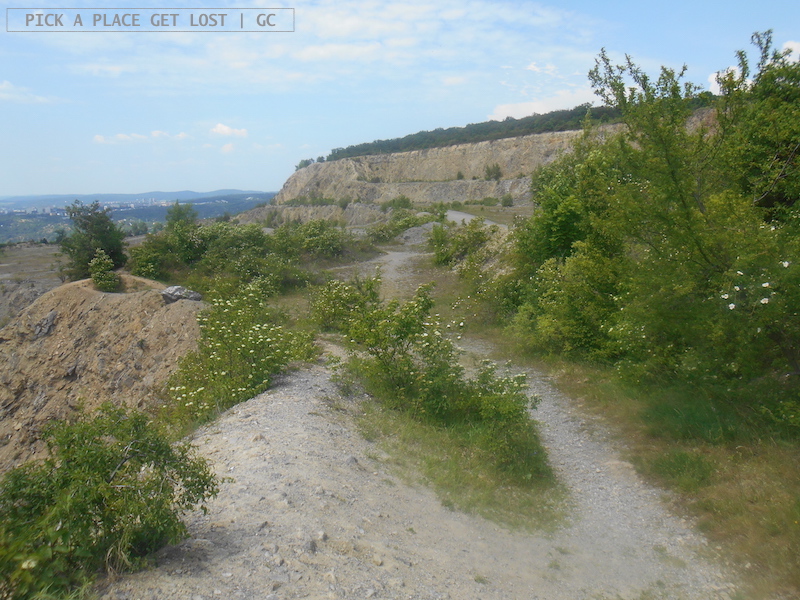 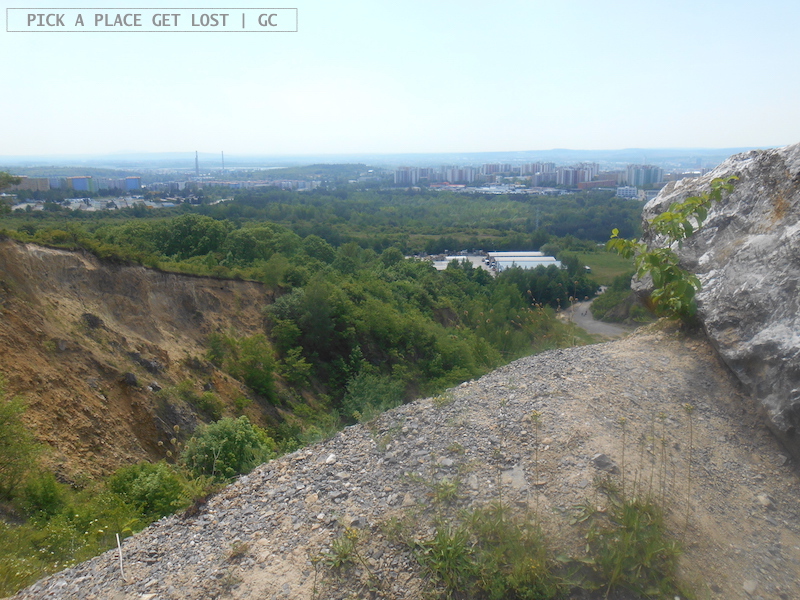 Some time later, while exploring Stránská skála, I learned the name of that hill. On top of Stránská skála (a low hill fairly close to the centre – that is where, incidentally, I learned about the existence of sort of trees populated by larvae-like insects: the larvae take over the branches, envelope them in a thick web-like cover, and just inhabit them for some unfathomable reason. In one word: YUCK) I came across a sign showing which points of interest you could see from that standing point. ‘My’ hill was also clearly visible (more toward the right), and was labelled ‘Hády’. Ha! (Btw, ‘hády’ sounds like ‘hadi’, which means ‘snakes’ in Czech and Slovak, I have yet to find out whether it’s all coincidental or there’s an actual connection between the two).

I felt the next step would be to find out how/whether it could (easily?) be reached from the city. Well, long story short (I really have to stop rambling on and cut to the chase), I was looking for some forest to explore on a day off, and my eyes ‘found’ Hády on Google maps. So I went there. And I walked along the top of the hill, whose funny, unique shape is in fact a sad side effect of man-made erosion. I could see the whole of Brno and beyond from the top, and it was such a bright day I could see as far as the cathedral and even the office building itself. 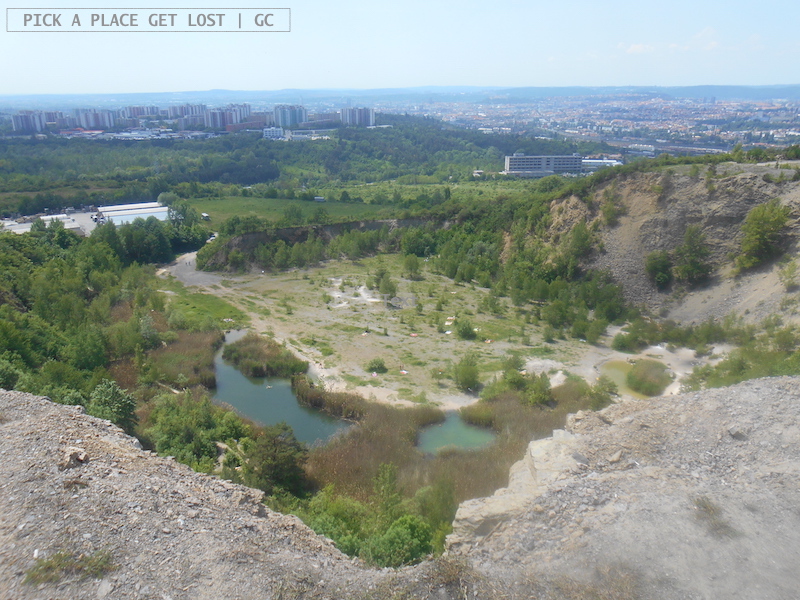 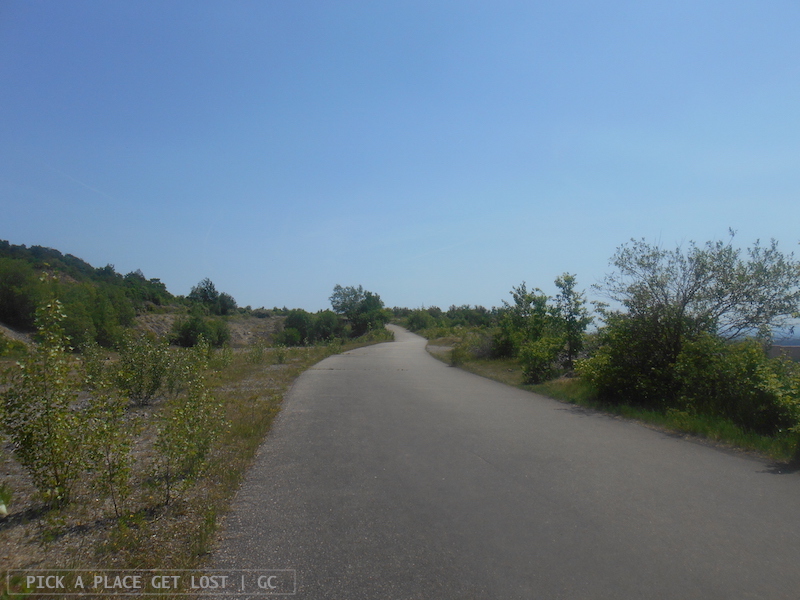 Then I saw that right behind the hill itself lay a whole area called ‘Hadecká planina’, also with woods, so I also went there.

Upon leaving the Hády area, I came across another sign that sounded evocative and inspiring, ‘Hornek’, so I also went there. And I found myself by a rocky spot overlooking a sea of green. There were only green hills, sunlight and silence. It took me a while to force myself to leave. 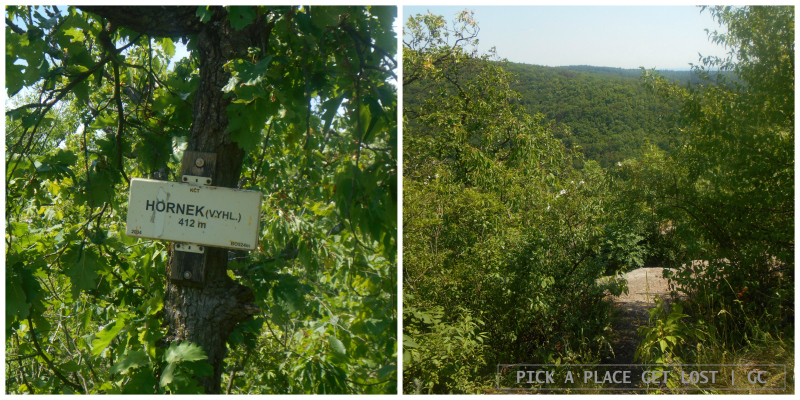 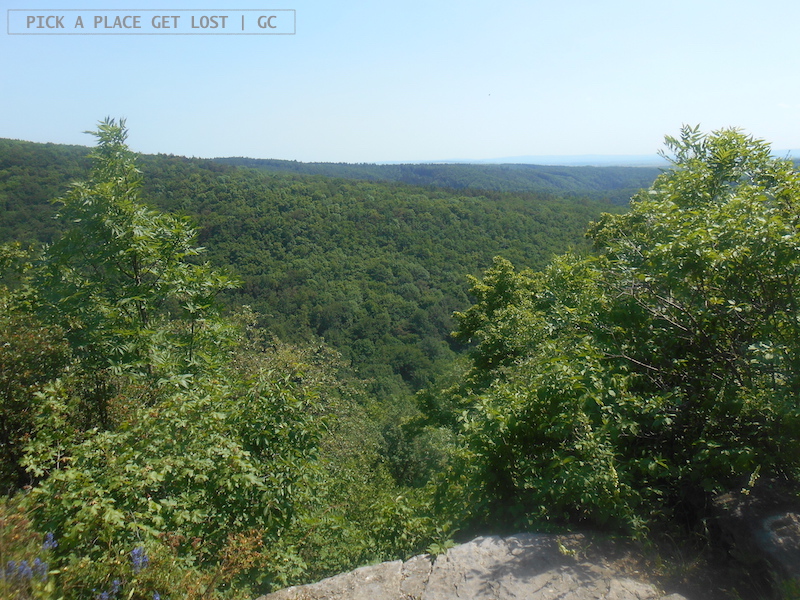 Then I noticed that ‘Údolí Říčky’ wasn’t that far from where I was then, and a Brno journalist had mentioned it to me, so the name did ring a bell when I noticed it, so I also went there (though I’ll have to go back, as the area was too wide and I had too little time by the time I got there before I had to go back to Brno). 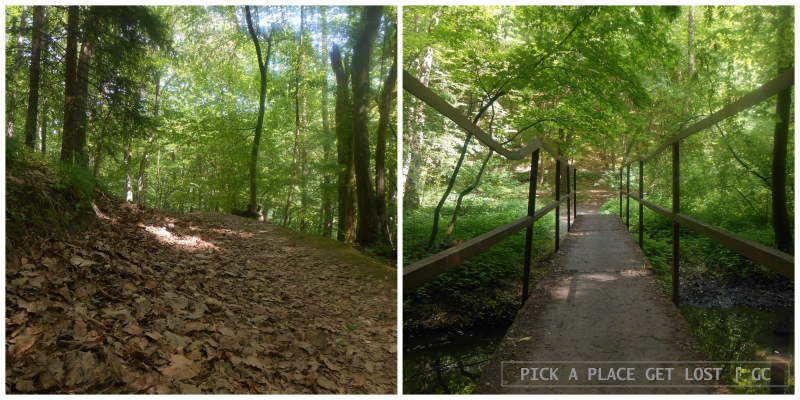 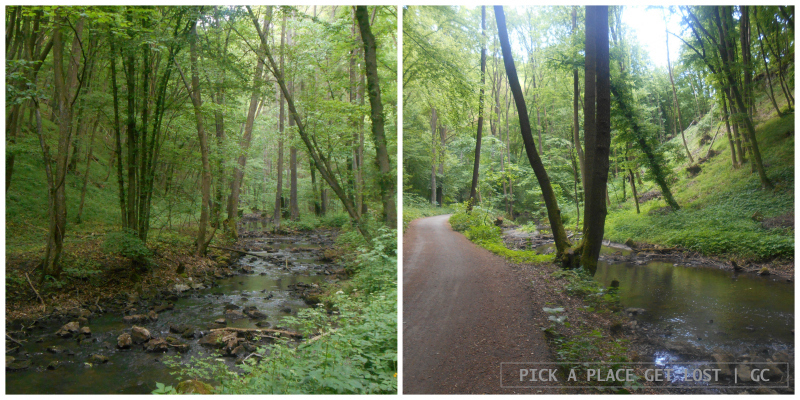 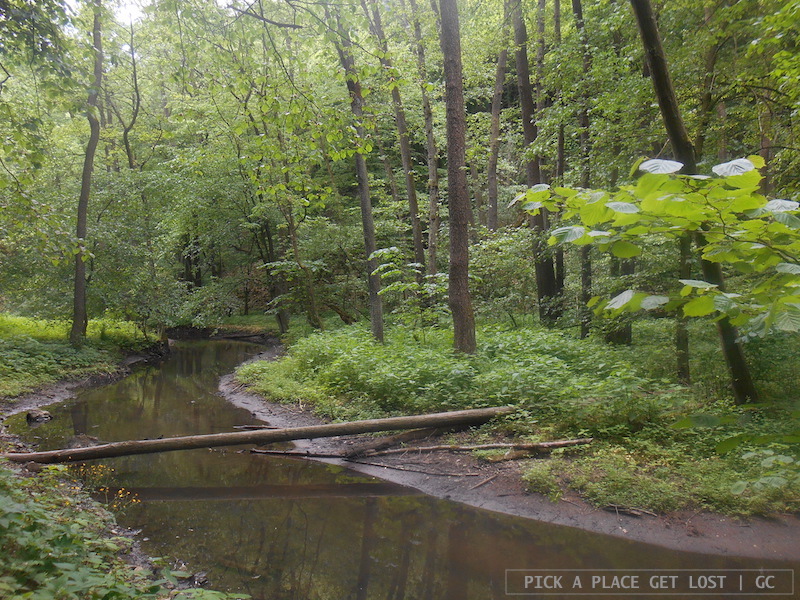 From the Údolí Říčky area I followed the trail signs pointing toward some bus stop some 6 or 7 kms away, and crossed through more woods overlooking a couple of lakes (I’m not 100% sure when exactly I was walking along the second of the two, or suddenly there was a third, or maybe it was still the first). I eventually emerged at the Marianské Údolí bus stop, where i managed to board a crammed bus 55 minutes before the overcast sky melted into heavy rain. 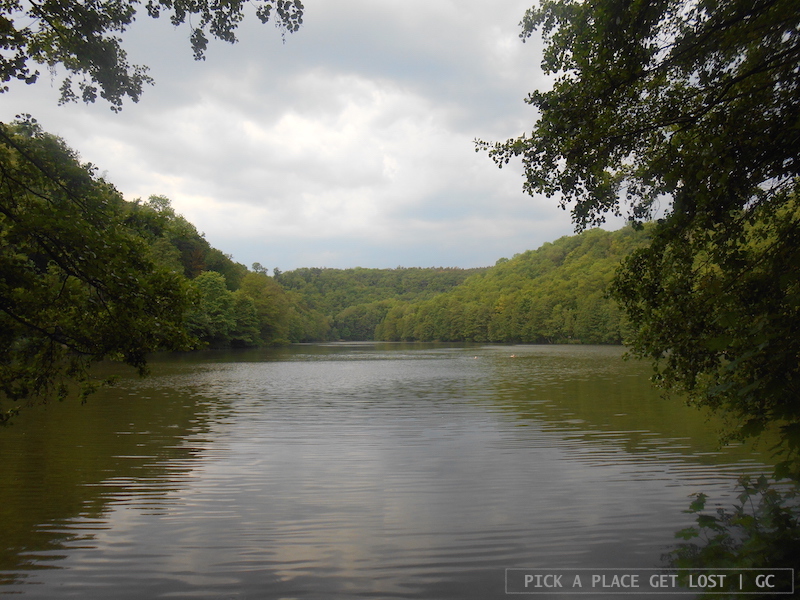 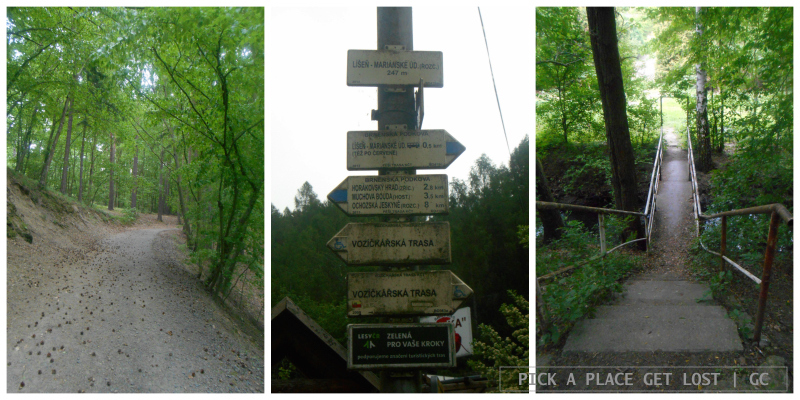 Much of this hike turned into an ongoing surprise. I’ve never been through a desert (yet), but really, Hády kind of reminded me of some idea of desert-like landscape I have stored somewhere in my mind, i.e. earth dried up by the sun and rocks barely covered with sparse bushes and thin grass. Going from sun-dried Hády to shady, leafy Údolí Říčky results in an almost funny, certainly striking case of two-sides-of-the-same-coin kind of landscape. 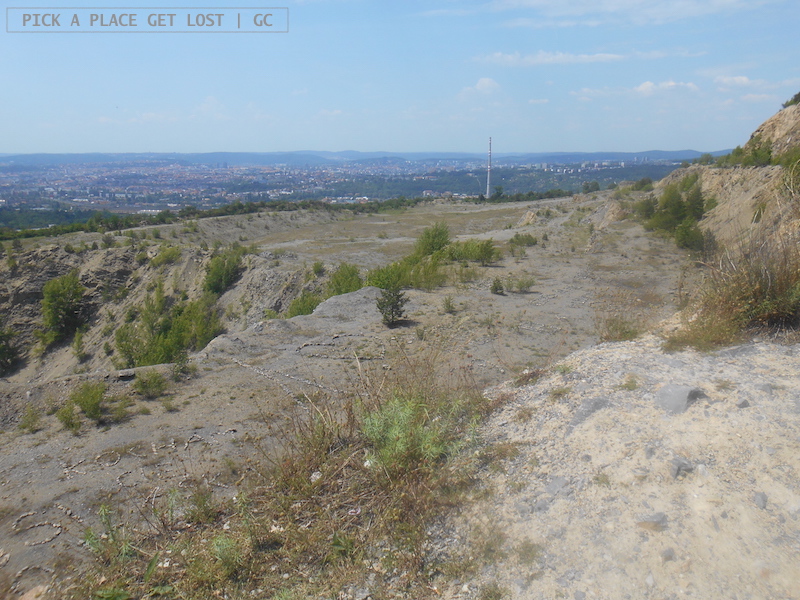 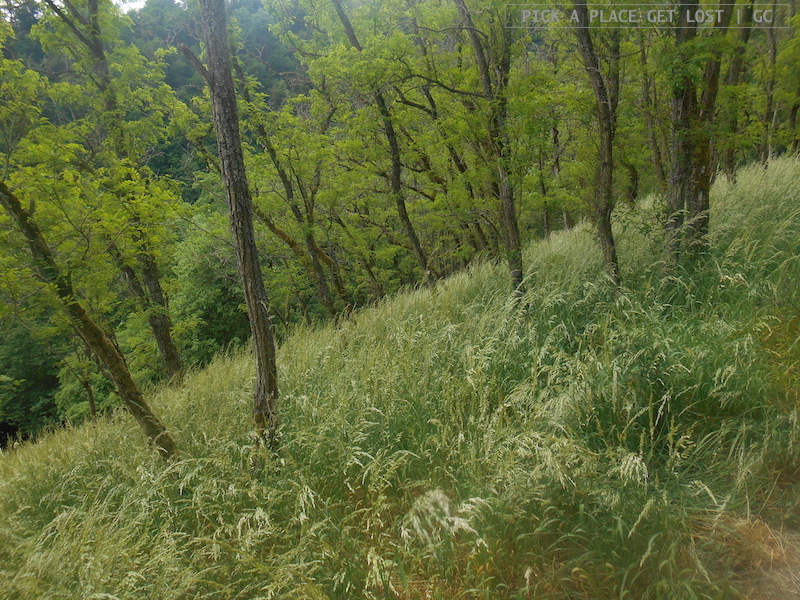