The best and most advisable way to get straight to the heart of the Neustadt is probably by walking down the Augustusbrücke (Augustus Bridge). There is, however, much more to the Augustusbrücke than the bridge itself. For a thing, it might potentially take you a while (or a long while) to get to the opposite side. At least, that was the case for us, as we repeatedly paused to admire and contemplate the beauty of the river. Seriously, the Elba was mesmerising, what with its icy, frozen appearance, which made the riverbed and its shores look even broader than they already are (and they are broad).

What is more, reaching the other side of the Elba river implies moving from the Altstadt to an area of the city that couldn’t possibly be more different from its older (at least by name) counterpart.

Technically, it takes less to list and describe the places of interest, monuments and tourist attractions scattered around the Neustadt: in quantitative terms, the New Town includes objectively fewer than the Altstadt. Yet it would be extremely inappropriate to use the amount of landmark buildings and museums as the sole criterion to rate how appealing and worthy of visit a city or area is, and how much of your time it deserves.

If that was the case, one would potentially spend much longer in the Altstadt than in the Neustadt, which, in my humble and modest opinion, would be a big mistake. The Neustadt might as well have considerably fewer majestic, sumptuous sights, but the vibe that runs through its streets and lingers in the air has a fairly unique feel to it. 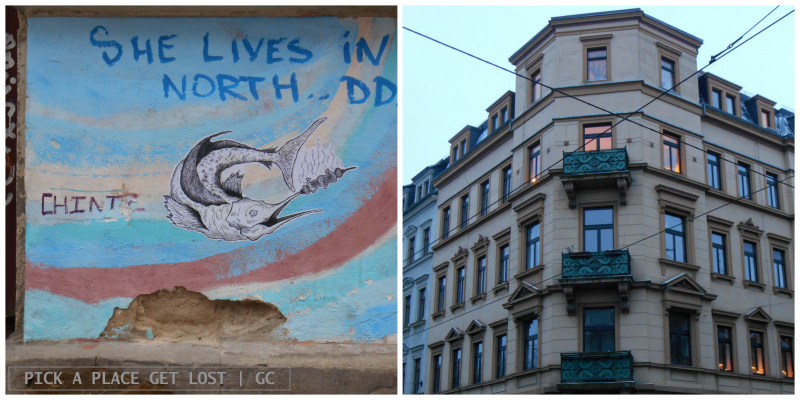 Right at the end of the Augustusbrücke you will find the best intro to what lies across the bridge, i.e. Neustädter Markt and the Goldener Reiter. The former is one of the main squares in the Neustadt, and was entirely rebuilt after WWII. The latter is the equestrian statue of Augustus II the Strong portrayed as a Roman emperor. Needless to say, it’s entirely covered in gold, which makes it look as bright and shiny as few other things you’ve probably ever seen. Call it majestic and sumptuous. 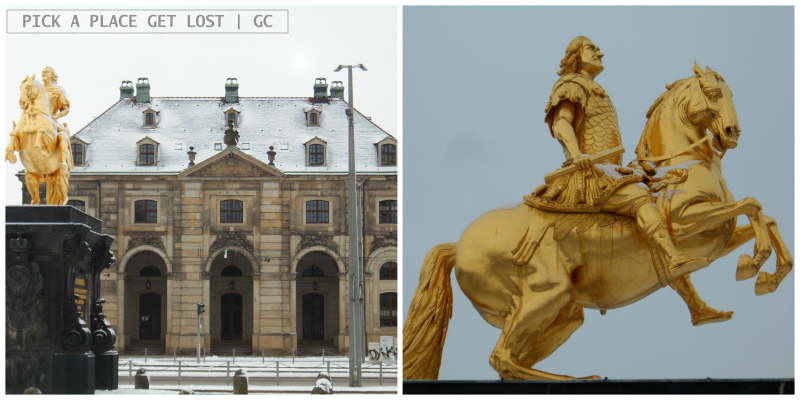 The design of the square is such that it will probably ‘lead’ you straight into Hauptstrasse, pedestrian-only and entirely flanked by shops, but rather nondescript in itself. But wait till you get to Albertplatz, and you will be closer to the most authentic soul of the Neustadt.

In Albertplatz we made a right turn into Bautzner Strasse, one of the Neustadt’s main streets. A bit further on, off the street itself on the right, you might want to keep an eye out for Snowdenplatz, which is not exceptionally breathtaking in itself (though objectively nice and somewhat artsy), but unique enough to be the only square in the world dedicated to Edward Snowden. 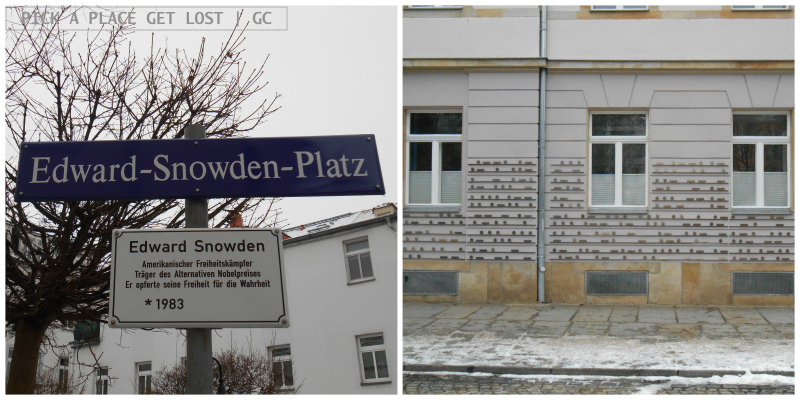 Not only is ‘artsy’ a very fitting adjective in itself (when used appropriately); it also happens to be one of the best ways to describe the Neustadt, other labels being ‘bohémien’ and ‘hip(stery)’, as they effectively describe the encompassing vibe it exudes. The New Town is scattered with bars, restaurants and boutiques of all types and fashions, and while it may be true that few institutional buildings stand out as you walk its streets, its seemingly ordinary allure makes it all the more appealing to wander about its side streets with no specific destination in mind. 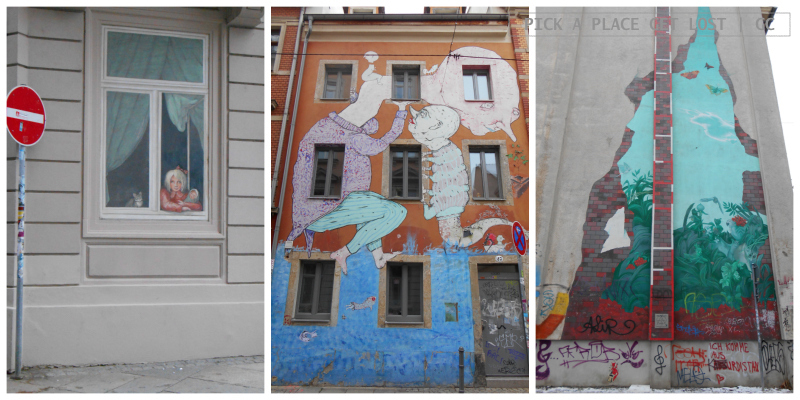 That said, you might still want to bear a couple of spots in mind throughout your visit, partly because that will give you a (rough) sense of direction, partly because, otherwise, you might end up missing up on something objectively unmissable. The first place I would like to recommend is a must. We too added it to our to-do list at the very last minute after lunch, as we ‘borrowed’ some (poor) wi-fi connection outside a bar and hurriedly googled ‘things to see in dresden’, because we felt we needed some extra tips on the spot. The place is called Kunsthofpassage, and you should know where to look for it to find it. 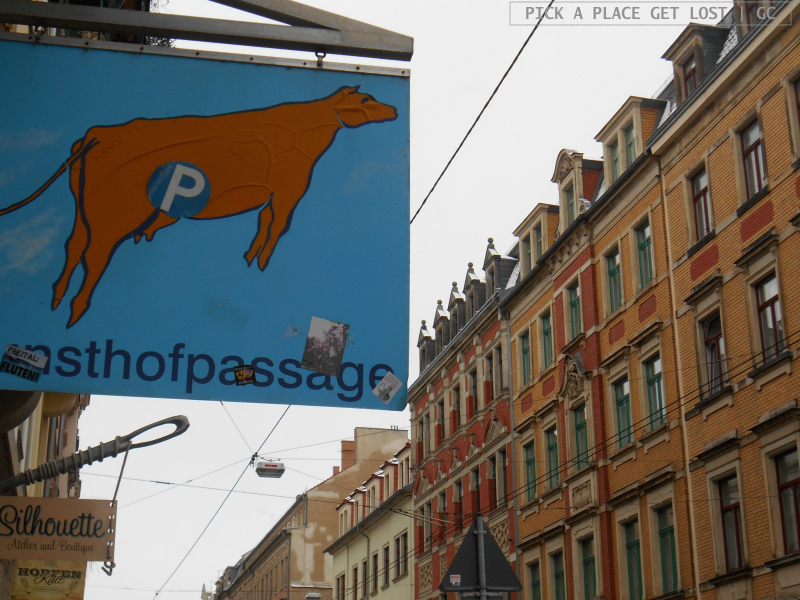 So, say you’re still in Snowdenplatz (just to go back to where we left it). You want to keep walking a few more metres down Bautzner Strasse, cross over and turn left into Rothenburger Strasse. Keep going till the street changes into Görlitzer Strasse, at which point keep to the left-hand side of the street and look out for the bright blue sign of a pink flying cow.

Found it? Good. Now walk through the arched underway right underneath, and… it’s Kunst everywhere. The Kunsthofpassage is a loosely square courtyard, lined on all sides with such brightly coloured, heavily decorated buildings that it almost looks fake in its colourful extravaganza. 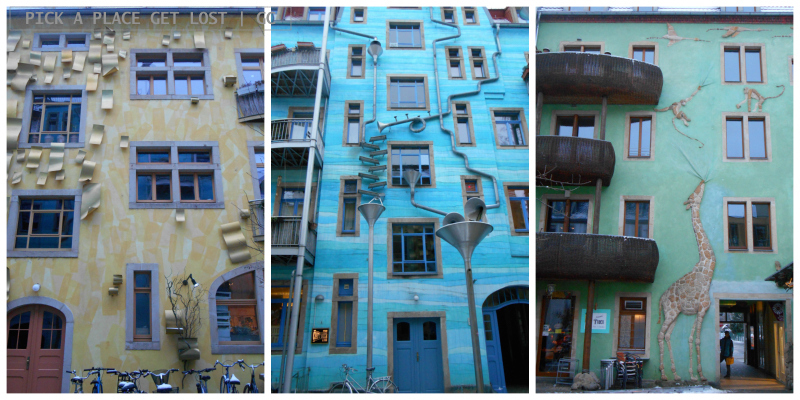 Three buildings look especially peculiar. One is the yellow one, whose facade is entirely covered in what look like thin sheets of gold. Then there’s the green one with the tall giraffe eating off the facade itself and a super nice and cosy bar on the ground floor – it’s called Neumanns Tiki Eisbar & Lounge and I talk from experience. Last but not least, there’s the blue building with the funnily shaped pipes climbing the outside wall. That is also the building you want to stand close to if it starts to rain: apparently the rain drops will ‘play’ music by hitting the pipes. I can’t tell for sure what it’s like, because while we were there it didn’t rain – and if anything had to happen weather wise, it would have involved snow, too light and delicate to make any sound. As for the tiny shops, boutiques and cafes on the ground floor, well, they’re highly recommended regardless of the weather. 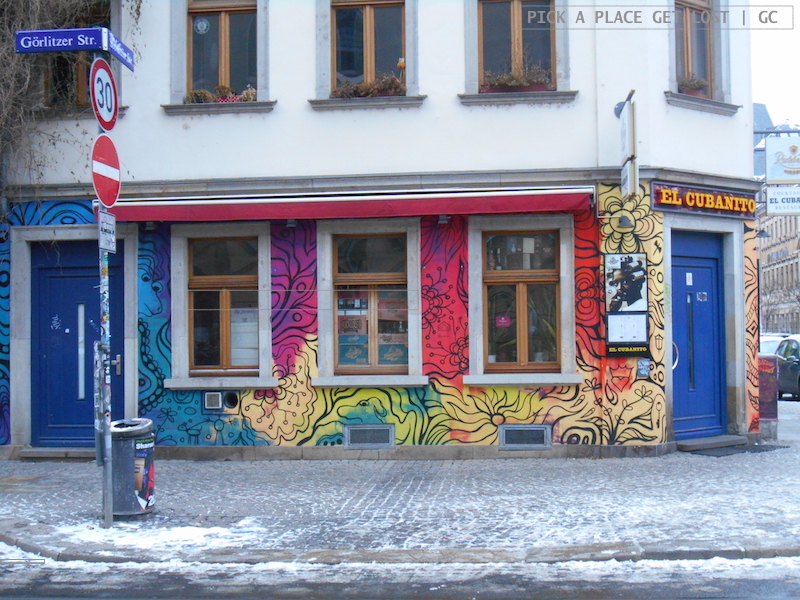 The second bullet point on our list you find at the very top of Görlitzer Strasse, and it’s Alaunplatz Park. Going from the super colourful signs and graffiti of the Neustadt to the whiteness of the park was a bit disorienting at first, but really, it didn’t take long to get used to its candour. The park was a broad white cover stretching in all directions, scattered with tiny dots that were in fact the (many) Dresdenites that made Alaunplatz so crowded on a weekend afternoon. Some of the dots were strolling, others were standing, and others were sleighing down the slope. Obviously, the bare trees and the white sky added to the perfectly wintery picture. As for the freezing cold, it doesn’t show in the photos but, trust me, it was there. 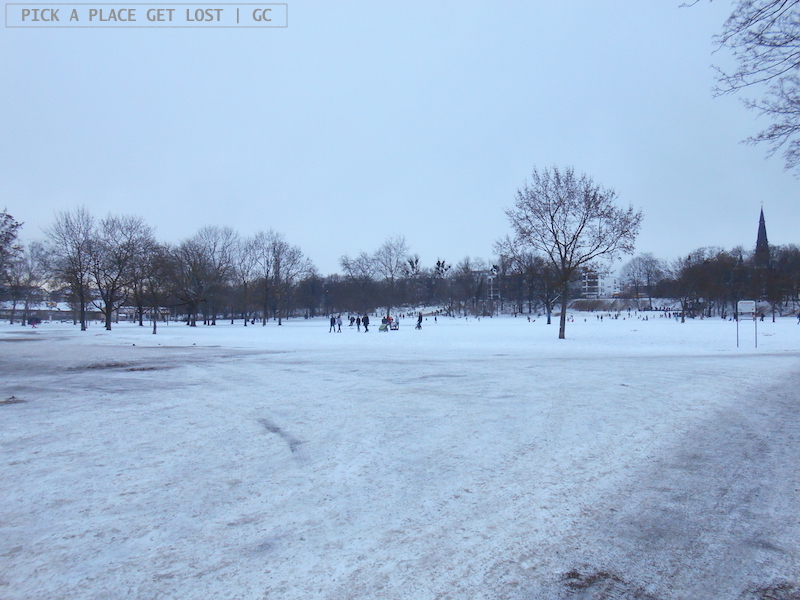 After leaving the park, we headed back to Bautzner Strasse, where, toward the very end of the street, we (finally) reached the Pfunds Molkerei (Pfunds Dairy). The shop is known as the most beautiful dairy shop in the world, so much so that it was included in the Guinness Book of Records. The reputation, though, is actually well deserved: the interiors display stuccoed ceilings, ceramic tiles everywhere and, needless to say, the finest selection of cheese and delicacies. Incidentally, the shop survived the 1945 bombing. 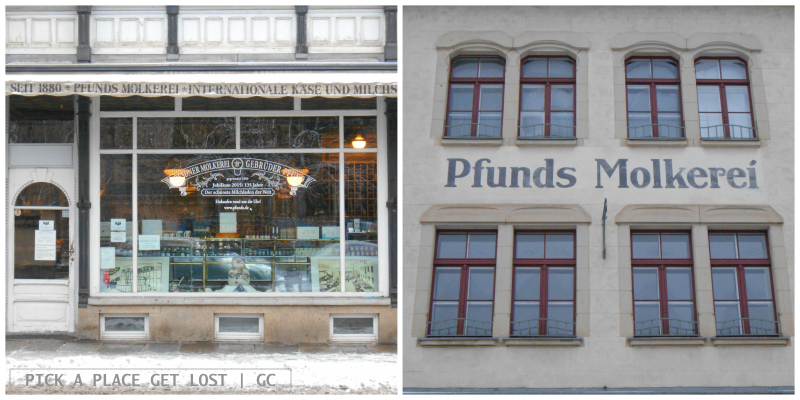 To walk back toward the Elba and the Altstadt we picked Königstrasse, the street that runs (sort of) parallel to Hauptstrasse. One of the prettiest sights we enjoyed along the way was Dreikönigskirche. You can easily reach the church from Hauptstrasse as well – it’s easy, as you see the church building towering over the low buildings on the side of the street. I like the way we came across it almost by chance, as we had barely noticed it on the map, nor had we taken any particular interest in the building when we’d glimpsed it from Hauptstrasse. The church facade itself, though, overlooks Königstrasse, and not Hauptstrasse, so if you walk down Königstrasse the tiny church square will open up to your right almost unexpectedly. When we got there it was officially twilight (!), and the square was amazingly lit up by star-shaped white and red lanterns that cast a unique shade of colour onto the snowy ground. It was beautiful. 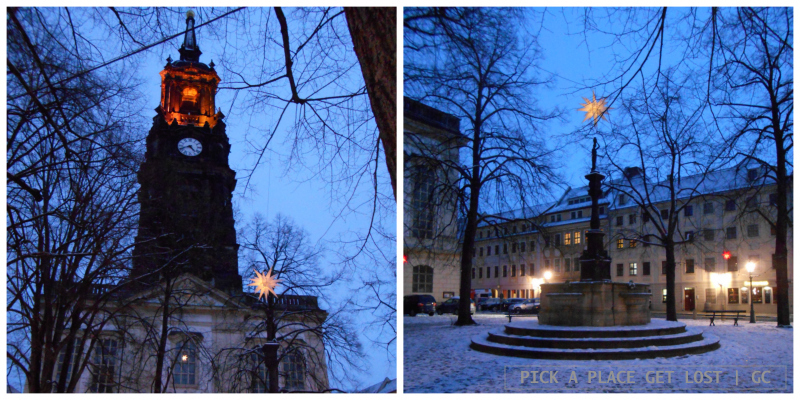 One of the coolest, most original Dresden sights you find right by the Elba shores, still on the Neustadt side of the river. Follow the Elba (i.e. if you’re facing the Augustus Bridge, make a right turn), and you will soon come across a burgundy red painting frame. That’s the Canalettoblick. The frame is empty in itself, but go and stand right in front of it so that you’re facing the Augustus Bridge. Now look ahead and it won’t look empty anymore, as what you see is the very same Dresden Bellotto was looking at when in 1748 he painted one of his most famous Dresden pictures: Dresden From the Right Bank of the Elbe Below the Augustus Bridge. 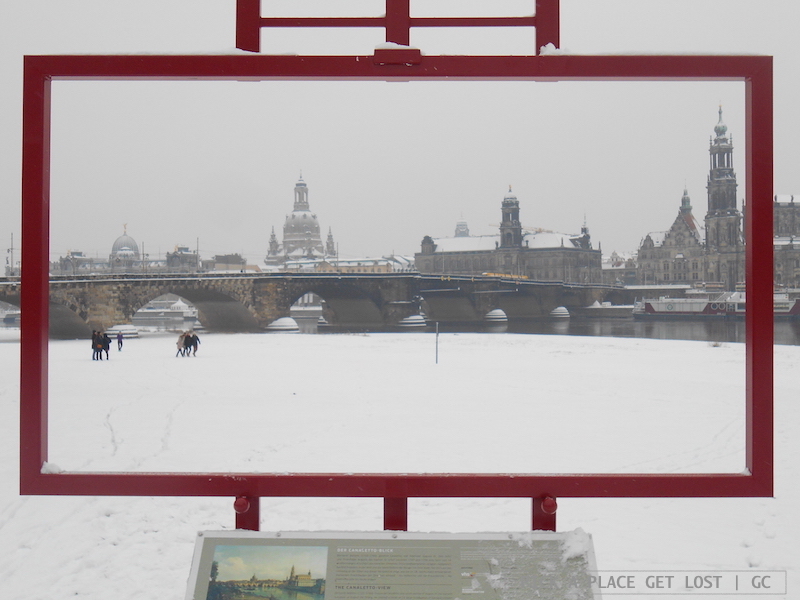 The Bellotto painter is Bernardo Bellotto, but the frame is called ‘Canalettoblick’, because Bellotto was also known as Canaletto, just like his uncle, the actual Giovanni Antonio Canal rightfully-known-as-Canaletto. To me Bellotto has always been just Bellotto, not Canaletto, and I find it super confusing that they’re both known by the same name. Had I been the one to choose the name of the standing point by the Elba, I’d have gone straight for ‘Bellottoblick’. But then, it wasn’t I who chose the name, and anyway I’m digressing. 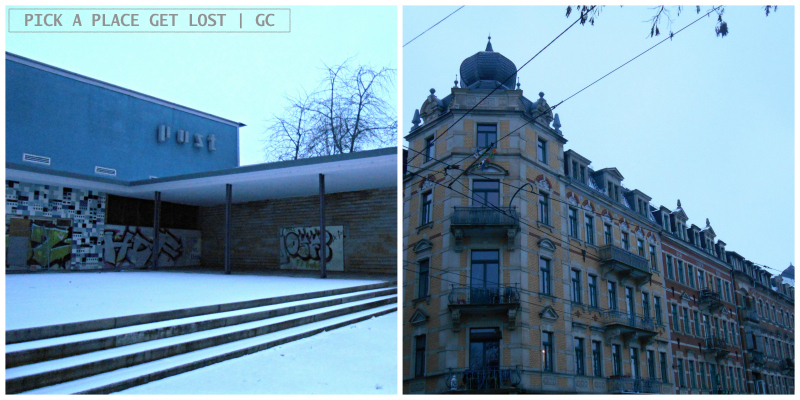 Shamefully, as with the Altstadt, we failed to tick all our bullet points off the list of ‘things-to-see-around-the-Neustadt’. It was objectively impossible to see and do more than we saw and did, given the little time we had on our hands and the heavy, incessant snow that inevitably hindered our speed of movement, at least to some extent. Some leftovers for the next visit include Martin Luther Church (which was being renovated in January), the old Jewish cemetery, the Bundeswehr Museum of Military History and, outside the city, the DDR Museum Zeitreise and the Loschwitzer Brücke (Loschwitz Bridge). I’ll get back to you on them after my next Dresden weekend, okay? 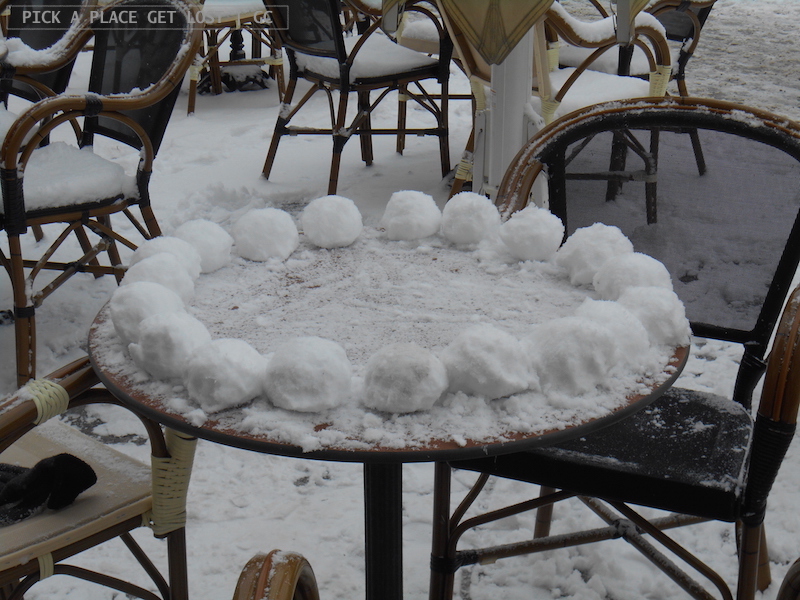