It’s often in the less touristy areas of a city that the urban landscape reveals its most authentic look. In the case of Dresden, it’s also a very socialist one. Good morning Dresden.

I’m not sure how I will be describing Dresden in this and in the following posts. I was lucky enough to write an article about Dresden for Italian online magazine Nuok [author’s note: the magazine was discontinued in late 2017], and it was great, and I loved doing it, and I put a lot of effort in it because I really wanted to convey the beauty of the city as it revealed itself to Bobby and myself during our Saxon weekend.

My goal here is exactly the same (i.e. convey the beauty of the city as it revealed itself to us), but the last thing I want is do so in the same way or using the same words as I already have. So I’ll just go with the flow (of words), which also means I will (probably) not be describing things and places as orderly as I usually do, but hey, hopefully the whole picture will still make enough sense overall. 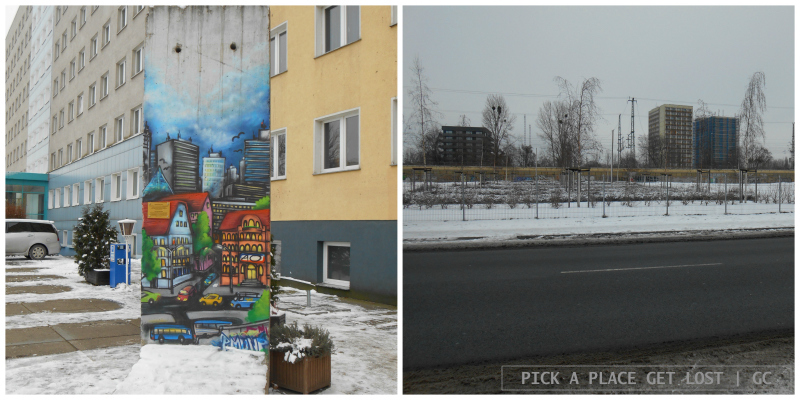 Let’s start from the basics. There are two sides to Dresden: the Altstadt and the Neustadt, i.e. the Old City and the New City. It may sound extremely straightforward, but in fact it’s not. As it happens, the Altstadt by name is newer (if not significantly newer) than the Neustadt by name is. The former is largely the result of post-WWII reconstruction. The latter was rebuilt after a fire broke out toward the end of the 17th century.

Our hostel was nowhere near the city centre, but conveniently located in the surroundings of the railway station, and anyway only a 15-minute walk from the heart of the Altstadt. It was still too early to check in when we arrived (around 11 o’clock on a freezing Saturday in early January), so the bag drop ritual was even quicker than average. As we headed toward the centre, hands and eyes glued to the still unfamiliar city map, we found ourselves immersed in the silence of a post-Friday-night winter morning. 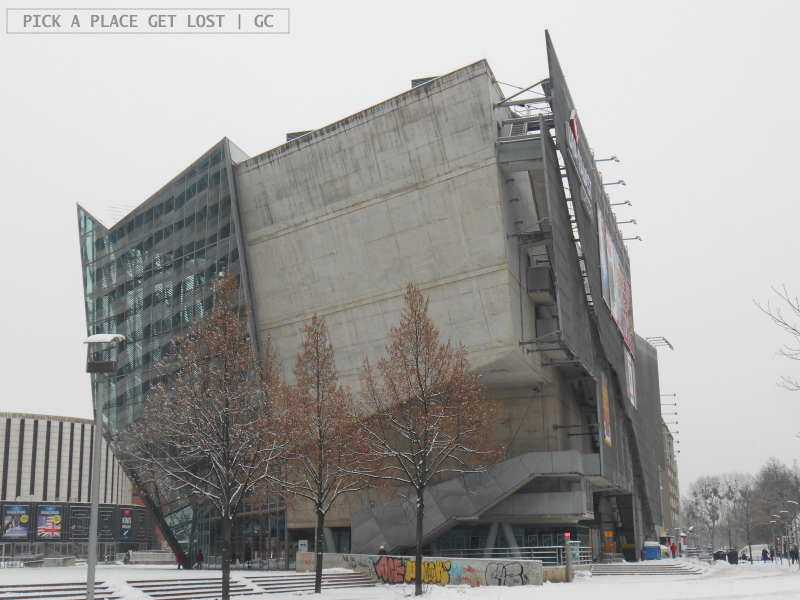 The piece of Berlin Wall standing outside the hostel somehow set the scene for what was coming. It was one of those reinforced cement moulds from the final decade or so of DDR regime, which were added to the existing wall structure in order to prevent any attempt to tear it down from being even remotely successful, not even when hitting the wall with the heaviest truck.

We walked along the western edge of what we identified as Großer Garten, Dresden’s main city park. As we learned (literally) along the way, the area of the Altstadt south of the Dr.-Külz-Ring road, less touristy as it might be (what with points of interests and the historic centre itself being largely located further up north), is where the urban landscape reveals its most authentically socialist look. 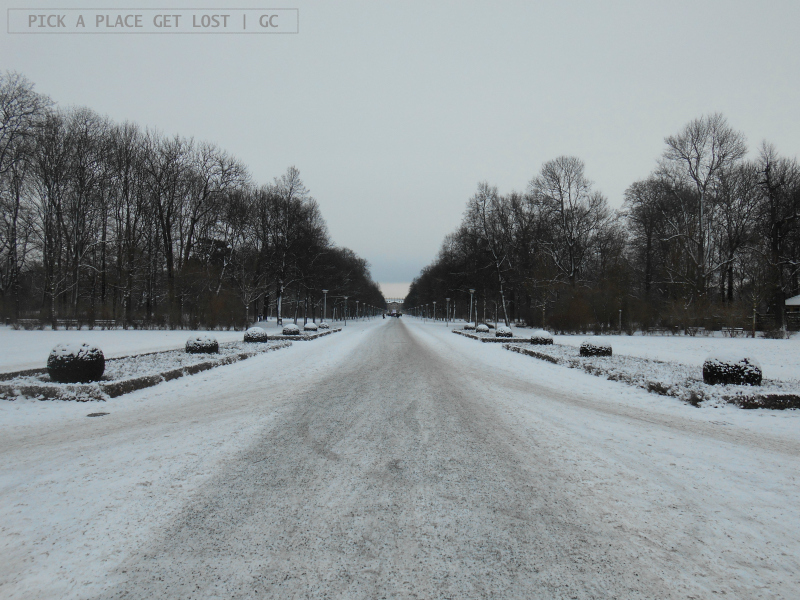 Go have a look at St. Petersburger Strasse and see for yourself. And while you’re at it, keep an eye out for the UFA Kristallpalast, a massive glass-and-concrete instance of deconstructivist architecture built toward the end of the 20th century for German film production Universum Film AG. You can’t miss it: it looks like it was casually placed on the kerb of the street and then left behind for good.

As for Großer Garten itself, during our weekend in the city it probably looked like the old, worn out black-and-white version of its usual self. There was so much snow, and the snow was blinding white as it kept falling incessantly, and you simply couldn’t tell what lied below the white cover, whether it was grass, gravel, leaves or tarmac. 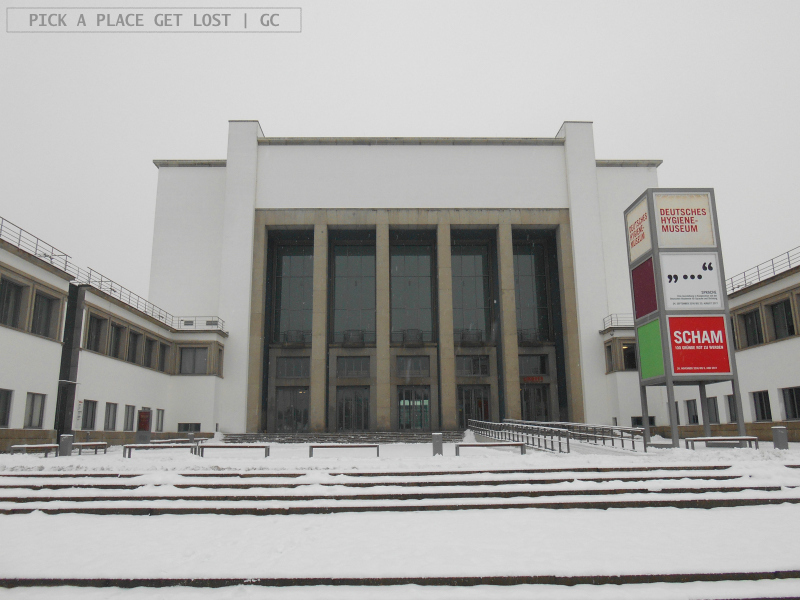 Two buildings that conform to the socialist norm quite literally are the Deutsche Hygiene Museum and the huge residential block at no. 5 of Grunaer Strasse. The former is rather belittling at first sight, but the chromatic scale of its facade went very well with its snowy surroundings. I’m not proud we didn’t visit it Hygiene Museum (we did really want to), but really, less than 48h for a first visit is an insurmountable barrier for anyone. NEXT TIME DEFINITELY.

The latter is a landmark building of the DDR years, when the regime proudly showed off the neon-lit sign ‘Der Sozialismus siegt’ (‘Socialism is victorious’) at the very top of the building facade. Neither the neon nor the sign itself are there any longer, but give it a few seconds and you will see for yourself that some letters are still partially, if not fully, readable there. Some things just leave a permanent mark, I guess. 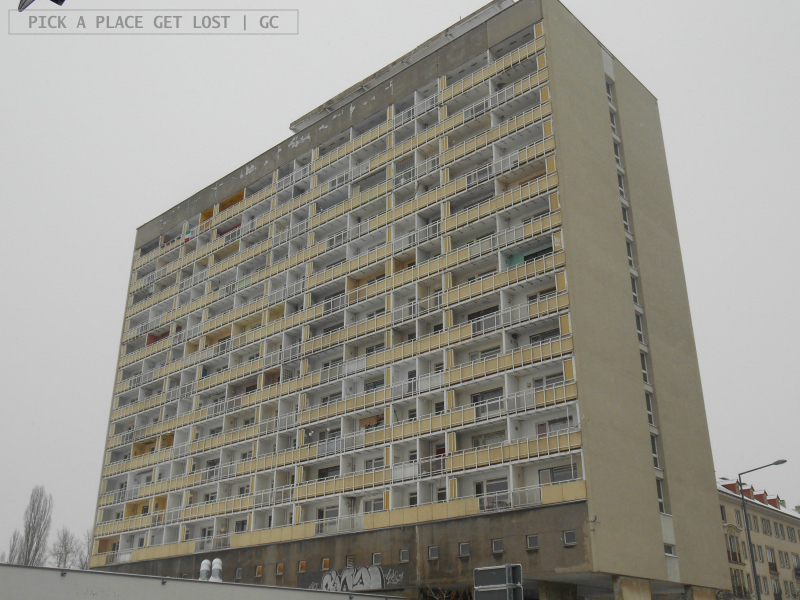 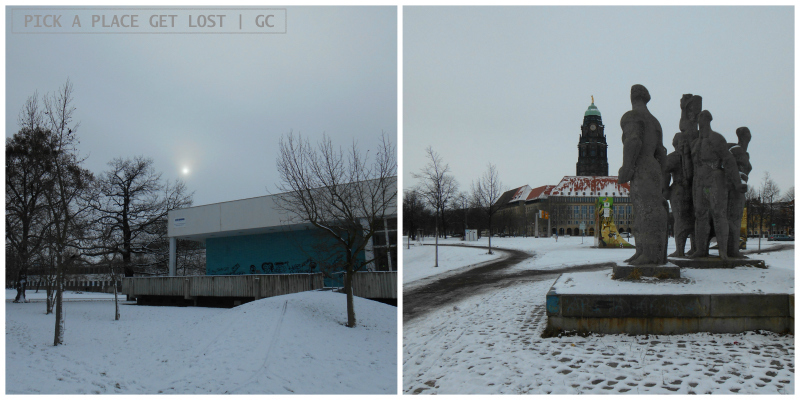 Seeing the Rathaus building in the distance, with its stunningly beautiful Hercules statue on top of its tower, I knew we’d made it to the gates of the historic centre. When we first glimpsed the Rathaus, we were still on the opposite side of the street, and were just walking past the Monument to Proletarian Internationalism and the HQ of the VEB Kombinat Robotron, East Germany’s main electronics company. It looked and felt like the two sides of the street were divided by a lot more than the two-plus-three lanes of St. Petersburger Strasse running in between. Maybe it wasn’t just a feeling.