Sometimes in winter, if and when it gets very cold, the Brno reservoir freezes over. Turns out, there’s a LOT you can do with a frozen lake. True story!

1. The pun in the title hints at the Czech word ‘přehrada’, which is the name of the place this post is about, and whose meaning is in fact ‘dam’ or ‘reservoir’;
2. The ‘Francesco’ repeatedly mentioned below is an Italian friend and colleague. He demanded that I mention his name (alongside Bobby’s) in this post, which seems legit, since it was he who suggested that we should go for a walk around the reservoir on one of the (few) Saturdays we (namely, I) had off. 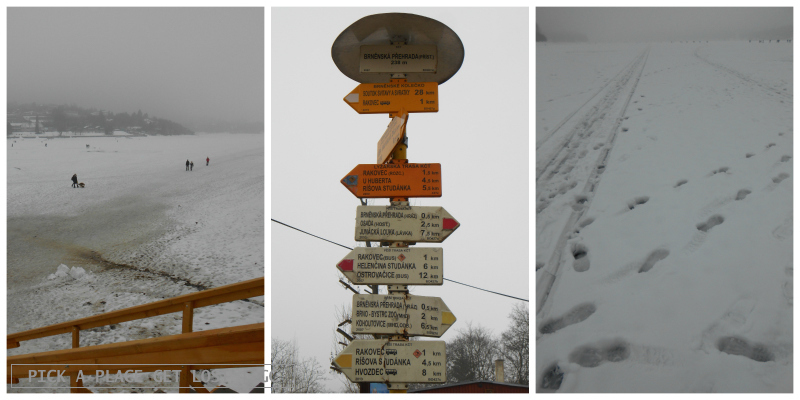 We got off tram no. 1 around 3pm: from Mendlovo square (the public transport ‘hub’ right next to the city centre) it’s only a 20/25-min ride.

During and after the tram ride I was still mildly knackered and exhausted from the three night shifts in a row I’d just had (which obviously led to a LOT of uncontrollable humming and singing REM’s ‘Daysleeper’ for hours on end), so much so that for a while I seriously feared I wouldn’t survive a whole afternoon outdoors – or that I would survive it badly. It wasn’t even too icy cold, so I couldn’t rely on that to keep me fully awake and alert the whole time.

If I had known what it was going to be and look like, I wouldn’t have worried about falling asleep in the first place. I’m all about winter and cold and frozen landscapes the whole time, but I really couldn’t have foreseen the absolute beauty that opened up in front of us within a bunch of minutes of strolling down the path toward the lake. 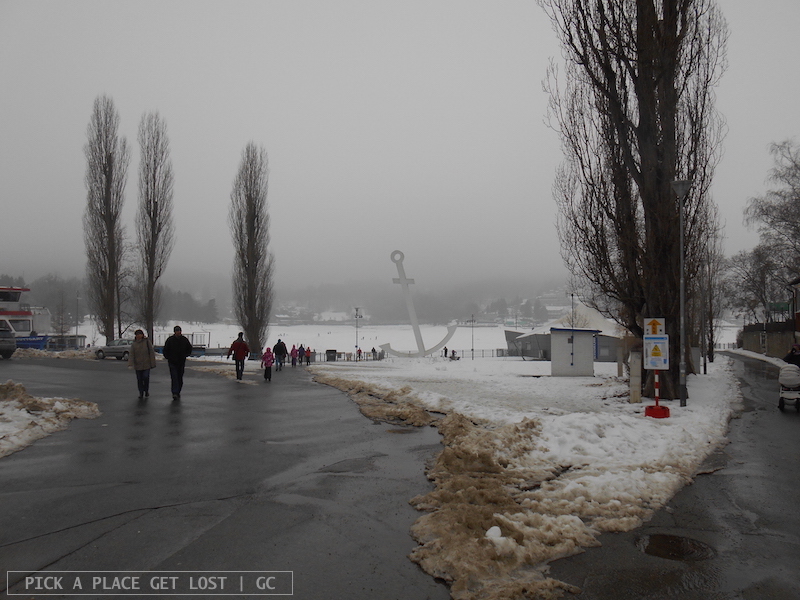 The ‘lake’ is in fact 100% artificial in itself, being the result of the construction of a dam on the Svratka river. It’s commonly referred to as ‘Brno Reservoir’ or, as I discovered later, when I looked up extra info about it, ‘Prýgl’ (that would be the local slang).

The first thing you can’t help noticing as you approach the lake is the huge anchor-shaped monument (also white, obviously) artfully placed by the shore. The second is the boat-restaurant/pub right next to it, with the reassuring ‘Starobrno’ beer sign in plain sight. The third is the lake itself, at which point it will take you a while to be distracted by anything else. 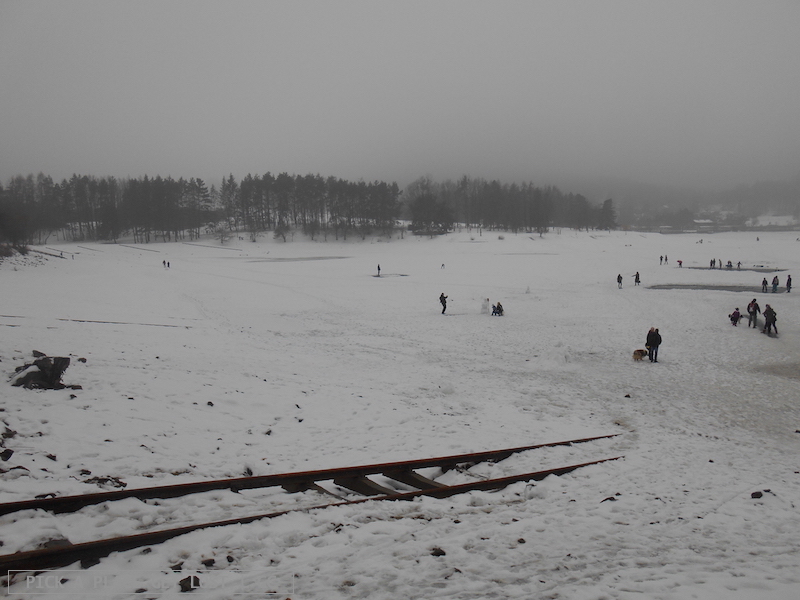 Seriously, the reservoir is like a giant black-and-white painting you couldn’t possibly fit into the largest frame. It’s like one of those 19th-century lesser known canvases painted by some lesser known Impressionist author whose artworks take up lesser visible spots in a museum room and, because they weren’t preserved exceptionally well throughout the decades, they are covered by the thinnest layer of dust.

With the reservoir, it’s the mist that gives everything a dusty, blurry look and feel, but while with paintings dust usually signals poor maintenance, around ‘Prýgl’ mist adds uniqueness to the landscape instead of diminishing its beauty. 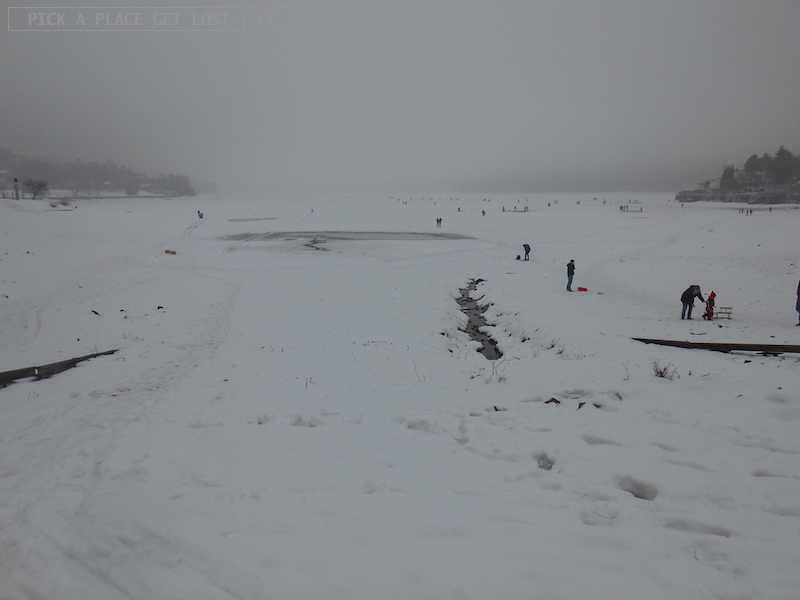 The Přehrada is also a real-life handbook of ‘Winter Pastimes according to Czech people’. It’s amazing how much they can get out of a frozen lake. During the winter months, people spend time on, by and along a frozen surface in the same way that people usually spend time in a park in a summer afternoon. I mean: how crowded is it? From a distance they look like tiny coloured dots scattered all over the snowy surface of the lake.

There are people strolling and running along the lake surface, people practising cross country ski (don’t get in their way, or else do so at your own risk – true story, tell Francesco), people removing the snow and polishing stretches of ice to play hockey or ice skate, and people snowmobiling their way around.

We began our afternoon walk by happily strolling along the reservoir, but soon enough we felt we had to go straight to the point, i.e. we had to literally head toward the actual lake and make the most of it. 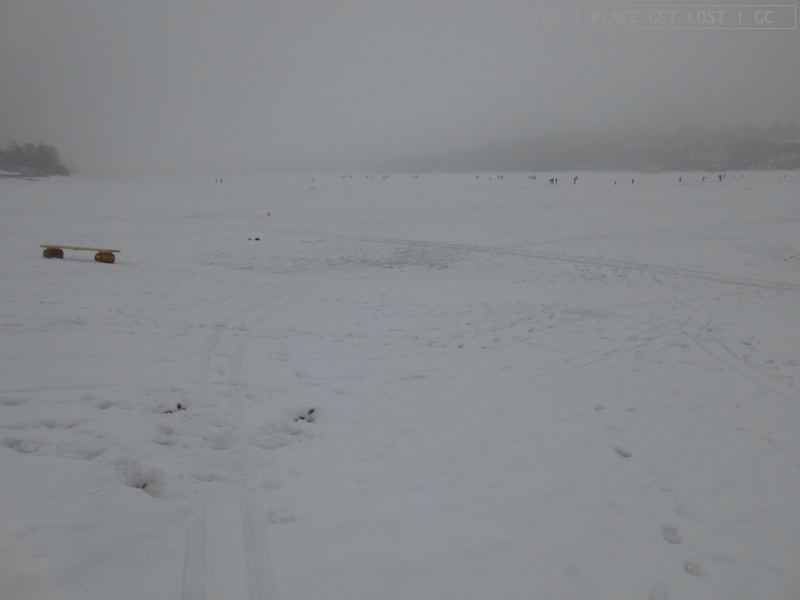 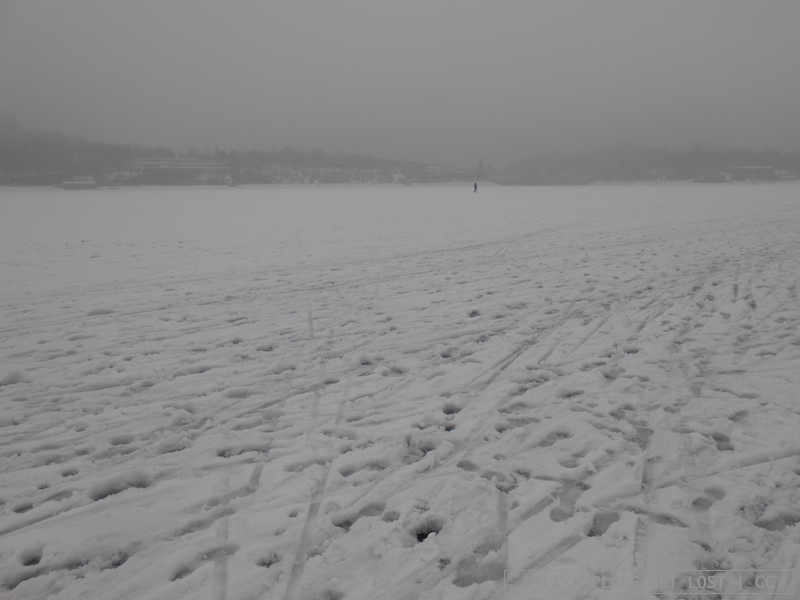 And that is exactly what we did. We walked down the lake surface for a non-specific amount of time and with no specific destination or goal in mind. We didn’t go as far as Veveři Castle (which is located on a hill overlooking the lake and must be super cool): it was a bit too distant, plus it would expectedly get dark fairly soon. We resolved to go back some other time.

The lake itself is largely surrounded by the forest, a number of restaurants and bars here and there, a sports centre that apparently offers a noteworthy sauna (though Francesco got this information by non-Czech people, so I can’t guarantee how reliable it is on a scale from 1 to 10), and random sculptures (preferably phallic-shaped, because… well, because Brno, that’s why). 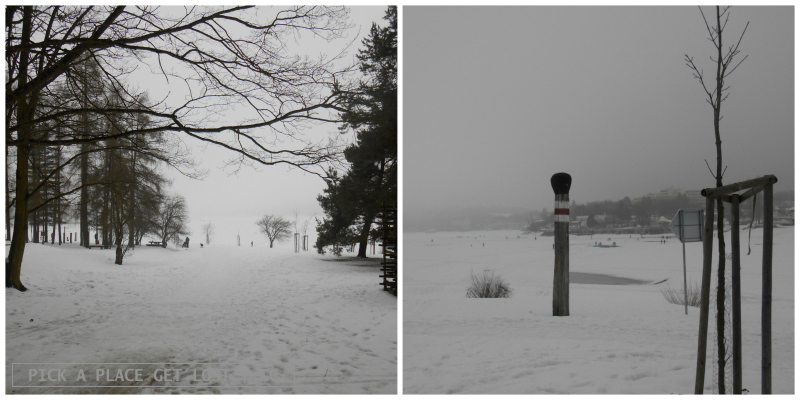 When we felt we could do with a break, we sought (and found) shelter in one of the bars/cafes by the reservoir. An hour or so and a drink later, we left the bar, hopped back onto the reservoir, and… Well, it looked like a wholly different place than it did when we’d got there. Mostly it was because it’d got even foggier while we were inside, plus it was already dark. The result was that you literally could not tell where the sky finished and the ground started. There was nothing to cling to, which could help us navigate our way back to the anchor-shaped monument. It was stunningly otherworldly. 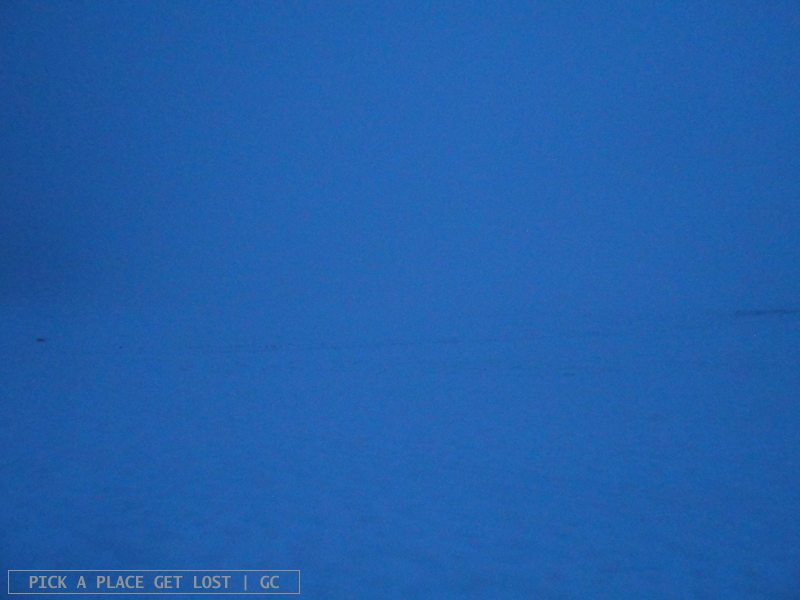 So we did something super naïve in its simplicity: because we’d turned left to step off the ‘main path’ and reach the bar, when we left the bar we turned right and kept going straight. There was not a living soul in sight. Which may sound eerie and Shining-like, but was in fact strangely fascinating at the same time, as it meant standing in nature and in winter and in silence at the same time. And how often does it happen these days. 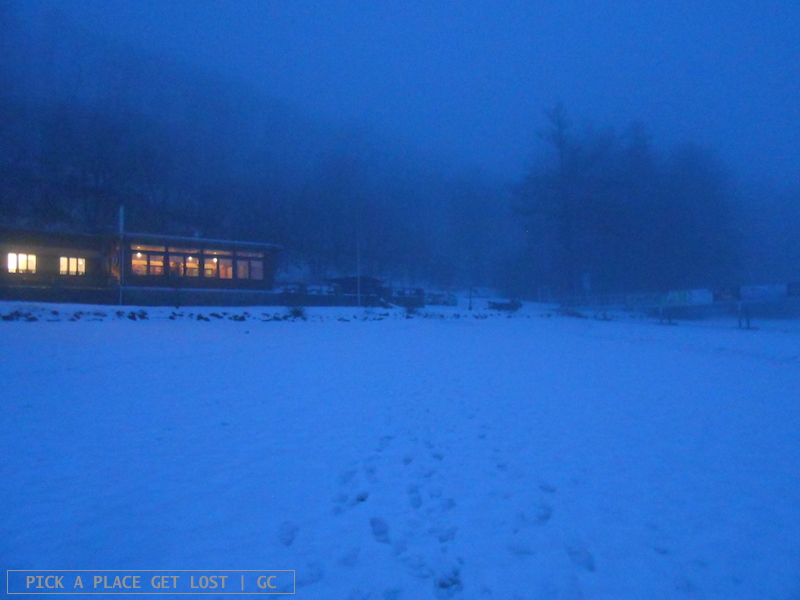 Only halfway through the walk did we resolve to abandon the icy cover and keep to the path running along the lake. It was safer and better signalled, we thought. LOL. Not only did we end up walking along the kerb of the street, right where cars drove past (thankfully not so frequently); it was also equally dark and equally deserted. At least we had decent mobile torches.

We eventually did return to the monument. First, streetlamps suddenly appeared on both sides of the path, so it wasn’t dark anymore. Then there were actual people interacting with other actual people, so it wasn’t silent and secluded anymore. By the time we arrived at the tram stop, everything was back into its own eminently urban form again. 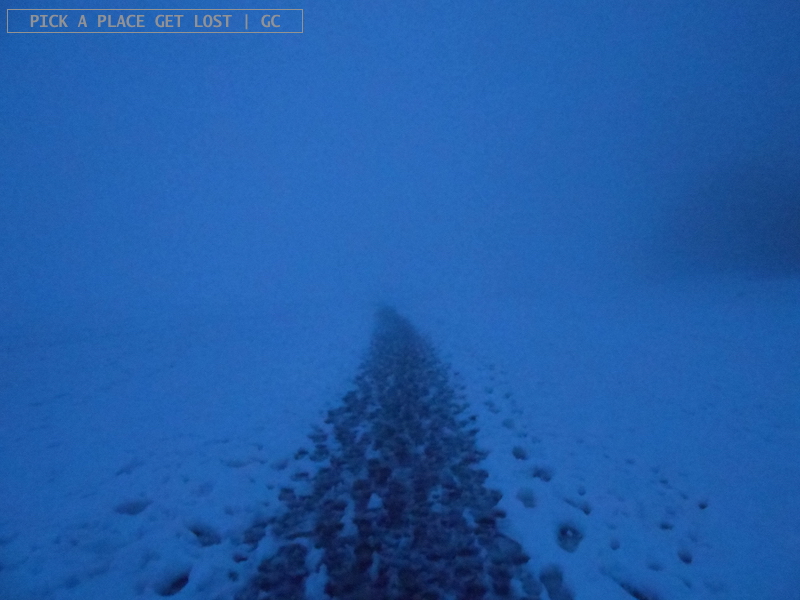 At a strictly personal level, the sight of the frozen reservoir was mesmerising. The lake was (and is, so far) the largest frozen surface I’ve ever actually walked on. What struck me the most, though, was how unbelievably black the ice can get. Blame it on the (rather dim) light of the day and/or on the frozen dirt trapped (literally) below the surface: it took me a while to realise I was already walking on the lake, and was no longer on earthy ground.

I guess there’s a reason I’m all about winter and cold and frozen landscapes the whole time. Well, Brněnská Přehrada gave me a few extra reasons to add to the list.