On day 2 of our Bavarian weekend we hiked up Hochries, through green slopes, rocky walls, and narrow trails. Also, eating in mountain huts is always a delight.

If Day 1 was all about lakes, Day 2 was, needless to say, entirely devoted to the mountains. While watching the sunset upon our arrival in Samerberg, Andi had anticipated that on Sunday we’d be hiking to Hochries.

It took me 48 hours to learn and spell the actual name correctly, but when he pointed a finger toward the mountain range behind us on the hill and showed it to us, well, it took me one second to memorise what it looked like. It was, if not the tallest, the second tallest of all. The top was not pointed, but had a flat profile, and you could see distinctly the outline of the hut on its very top. ‘That’s where we’re going’, Andi said. Yaay. I couldn’t wait. 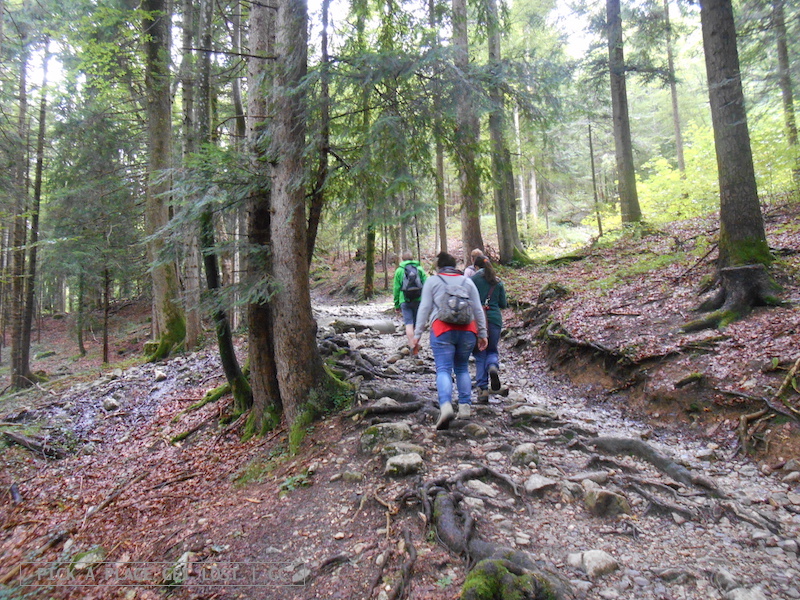 Despite the weather scare we got on Saturday night, when we checked the forecast and saw that it would be rather cloudy and rainy the day after, around 10 o’clock on Sunday morning we left Andi’s place and drove to the hiking trail. It had just stopped raining. Some thirty minutes later, we were officially hiking to Hochries. Heavy clouds, but still no rain in sight.

It would take me a reasonably great amount of time to put together an orderly description of the ascent. A hike is one of those experiences that are best described through images than words. Yet, this blog is more about writing about things than uploading photo galleries (which you may still find, occasionally). 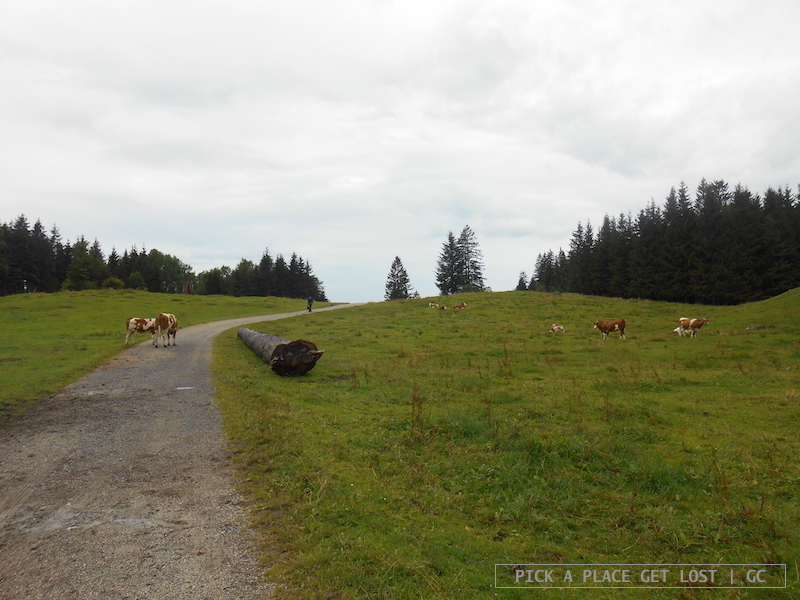 So in this case the best way to explain what it was (and felt) like to hike to Hochries top is probably to list the most recurrent snapshots I can still picture in my head if I think back to it:

green slopes dotted with sparse trees a darker shade of green, rocky walls bursting at the seams with grass and flowers, narrow trails twisting and turning on the mountain slopes, cows grazing in slow motion all over the place, trail included, ‘but as long as it’s not a mother cow, there’s nothing to fear’ (thus spoke Andi). 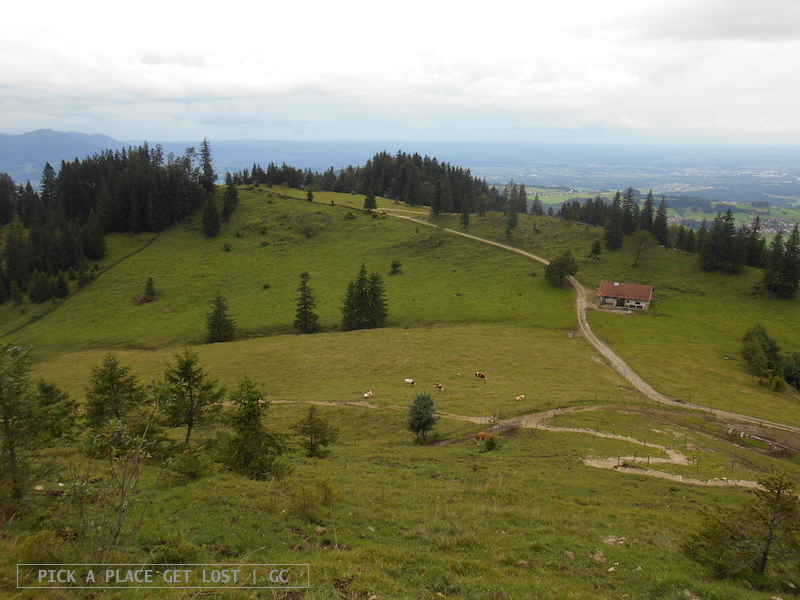 At some point Andi pointed at a valley somewhere in the distance, saying that from our standing point we could see all four Samerberg communities. ‘One, two, three, and… four! Where there’s a church, there’s a community’. You could easily make out four conglomerates of houses whose churches and bell towers made them easier to identify. 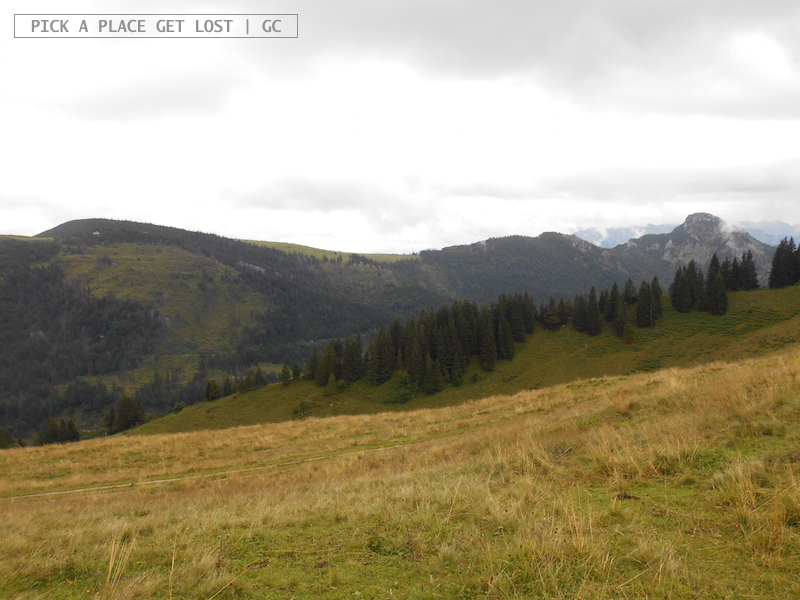 We weren’t rushing, so the ascent took between two and a half and three hours. Every now and then we’d stop for a minute only to turn around and see how the landscape had changed. And, when we reached the top, our fatigue was deservedly repaid with… fog. I’d been eagerly waiting for a stunning view from the top for hours, so I literally almost ran the last few steps to the hut.

Once there, all I could see was nothing but a thick wall of fog that prevented any glimpse of the landscape below. LOL. It was rainy, windy, foggy and cold. This all might sound a tad (or hugely) disappointing, but hey, you can’t argue with the mountain, and despite the lack of view I felt nonetheless super excited. In fact, I felt (and sort of was) on top of the world. 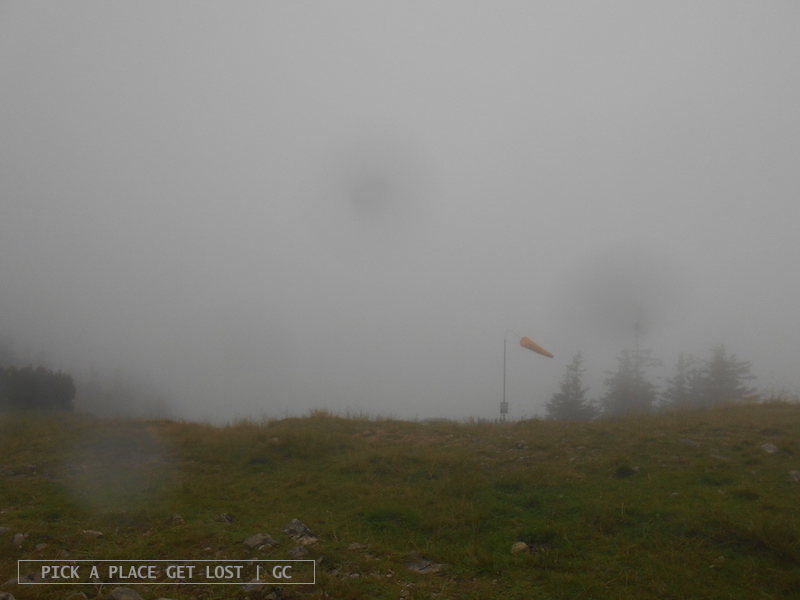 Right before we entered the hut, Andi fumbled in his slicker, and produced a tiny, handmade Bavarian-Italian flag. He’d made it so we could plant it on the top of the mountain. It had the Bavarian lozenges on it, except they weren’t white and blue: they were green, white and red, the colours of the Italian flag. 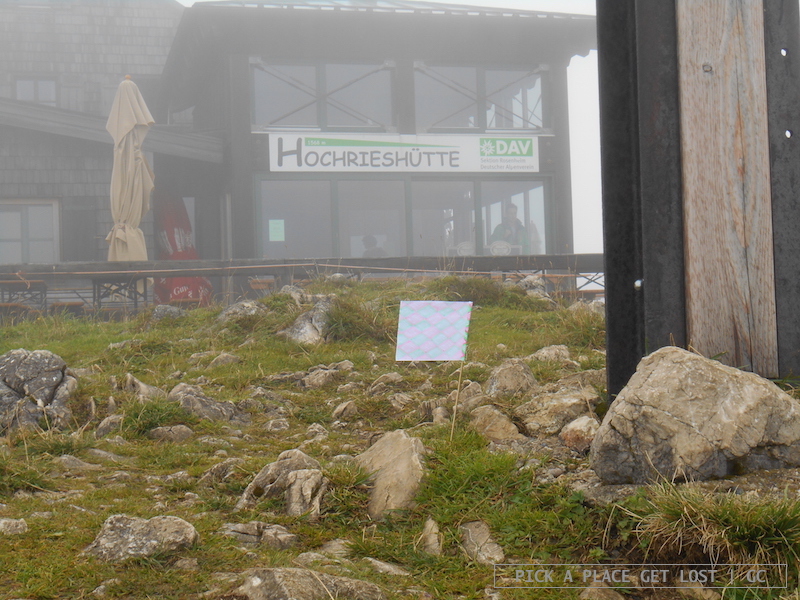 Andi handed the flag to Robi, who went over to the huge wooden cross next to the hut overlooking the valley, and solemnly planted its tiny wooden mast (i.e. a skewer stick).

The next step was lunch. While the guys went for bratwurst, I had potato pancakes with apple sauce and OH. MY. GOD. Thank you Bavaria. It was delicious. 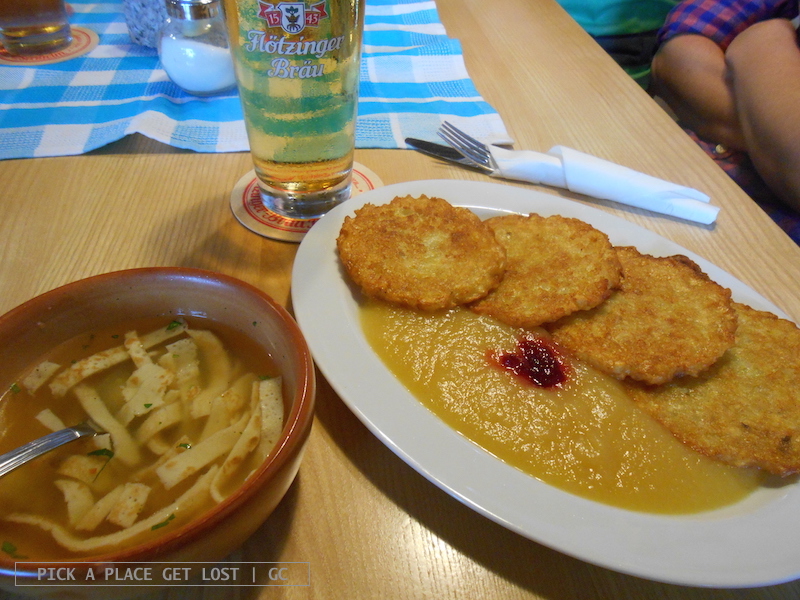 To get back to Samerberg we had to take the funicular. Our bus was leaving from Munich in the evening, and we had to make sure we’d be leaving for Munich early enough (Trubi was driving us to the bus station). The funicular left us somewhere unspecified, after which we kept to the main footpath to return to the car park.

We walked through the woods, then vainly went for a shortcut through the meadows, which left me ankle-deep in the mud (why does it always, invariably happen?). So we thought that main path sounded good, and returned to it, and then the sun appeared out of nowhere, and the grass was, as Bobby put it, ‘greener than green’. 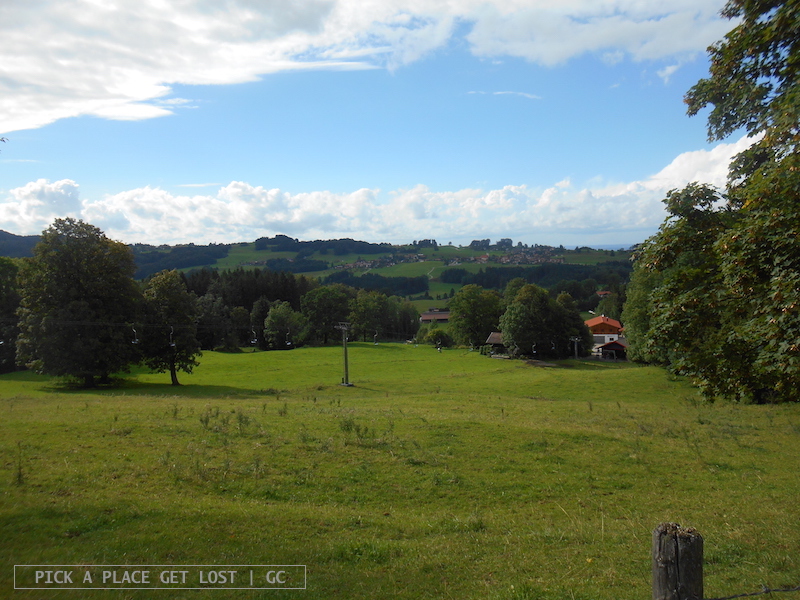 As we drove to Samerberg, we briefly stopped somewhere (there was green grass, there were trees, and that was it), and Andi showed us where he used to play as a kid. It only took a minute to walk to the spot, but you couldn’t see it from the road.

In the woods there was a stream, and an earthy clearing next to it, and that is where Andi and his friends met up and played when they were kids. It was shady and silent, but for the noise of the stream, and it was beautiful. 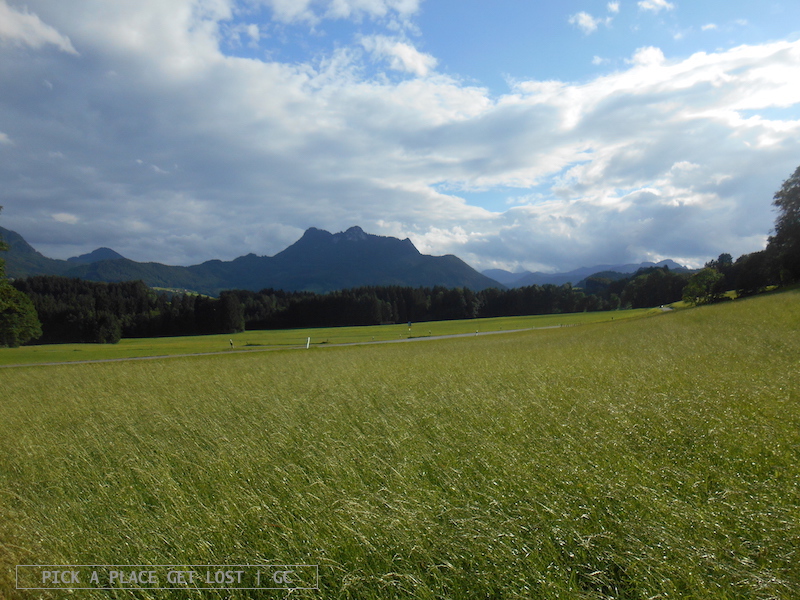 We arrived home only to discover that Andi’s mother had made soup, and the table was set, and we’d have a restoring hot meal before leaving for Munich. Bobby, Robi and I were lost for words, as we saw the large soup pot, but I guess we experienced exactly the same surge of gratitude at Andi’s Mum’s thoughtfulness.

Only after two portions of soup and two slices of chocolate cake did we muster up the courage to say goodbye.