Day 1 of our Bavarian weekend revolved around Chiemsee, Bavaria’s largest lake. The trip came with islands, viewing spots, and… a lot of ducks.

Bavaria is well known for the beauty of its lakes and its mountains. That I knew even before I first visited Bavaria.

When we went to Regensburg (and Munich and Nurnberg), because it was winter, we couldn’t make the most of Bavarian nature in its purest form, and privileged the (still amazing) urban landscape instead.

This time we only stayed a couple of days, but they were more than enough to get a taste of the full Bavarian-nature experience. 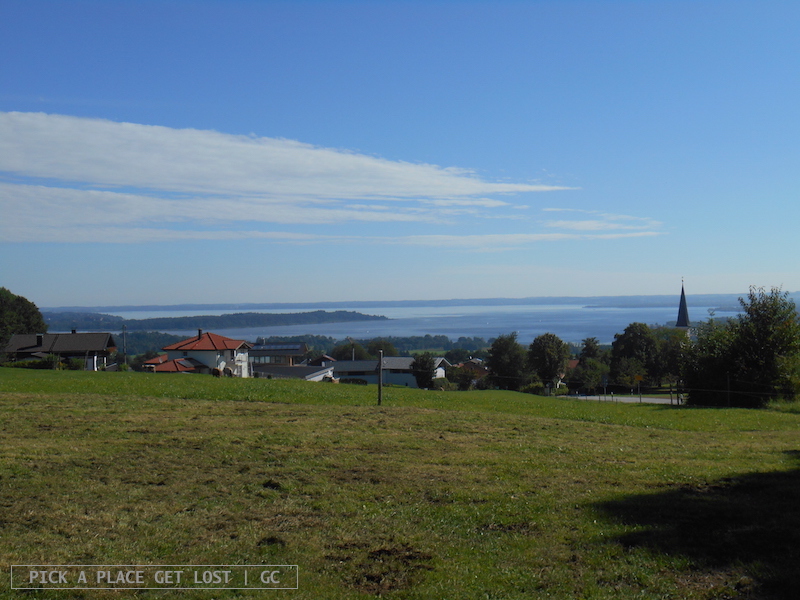 Day 1 was all about lakes. Andi chose to show us around Chiemsee, which, judging by the amount of people crowding the ferry terminal at 9.30 on a Saturday morning, must be a very popular destination with both tourists and locals. Incidentally, Chiemsee is also the largest lake in the whole of Bavaria.

As we waited for the ferry, I took photos of the lake. It was incredibly sunny and incredibly warm, and the view from the terminal was a bit like a race between the sky and the lake playing ‘who’s bluer than whom’. The lake was so huge you could barely see the opposite shore. In fact, at some point you couldn’t see it at all. 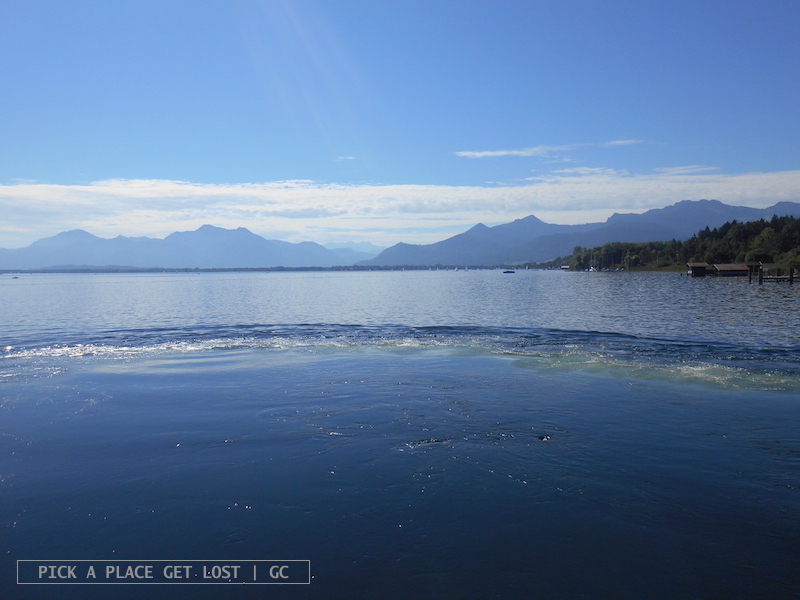 The (first) ferry took us to Herreninsel (Men’s Island), where King Ludwig II had the (insane) idea of having a castle built on the island. And not any castle, but an exact copy of the palace of Versailles.

Ludwig II was a huge fan of Louis XIV, and demanded that his Chiemsee palace be identical to Versailles in all its parts, paintings on the wall and rugs included. Except, the king was always too busy to actually live in the castle. In fact, he only went there a handful of times to check how the whole Versailles thing was coming along. 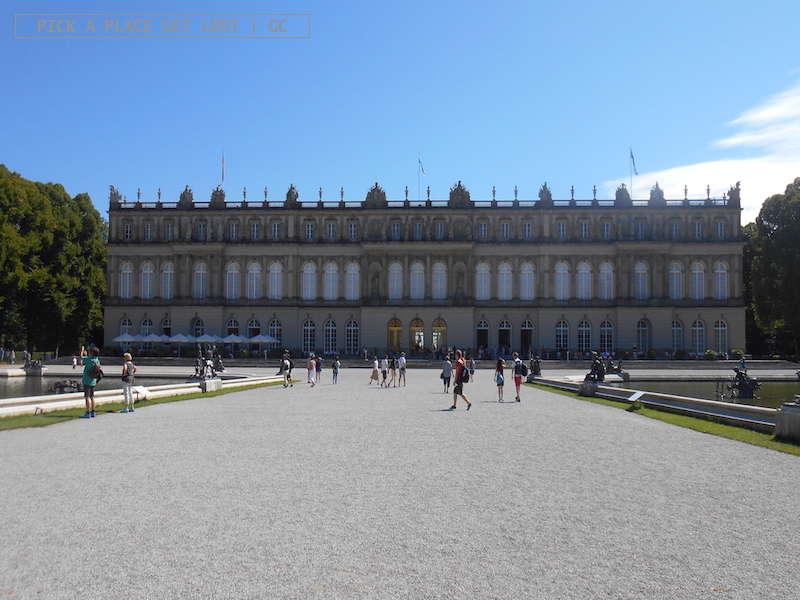 Apart from that, the palace was uninhabited (with the exception of the servants) until the king’s death, after which it stood there, abandoned and half built (incidentally, the king also went broke, amongst other things).

The guide will tell you a lot about the building process, and will also guide you through an unfinished portion of the castle, i.e. the king’s private staircase. That structure consists of four red walls and, quite expectedly, a staircase, also made of bricks. Yes, that’s it. 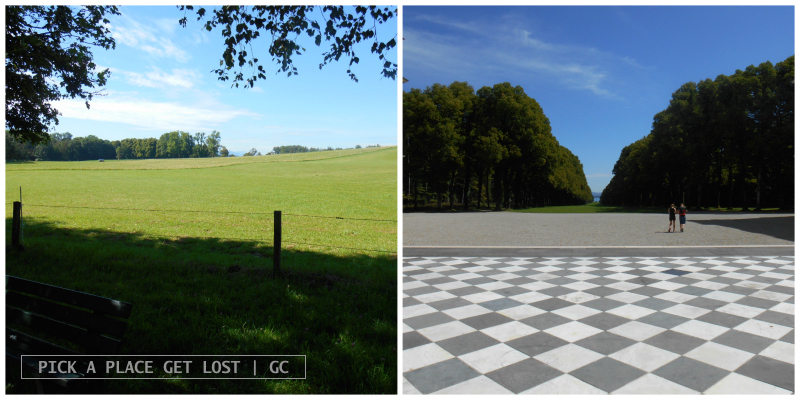 Once you’ve seen it (you won’t miss it, or any of the guide’s stories, as the only way to visit the rooms is with a guided tour), you will hardly believe that also underneath the stuccoed ceilings, the colourful frescoes and the gold-leaf walls in the other rooms are exactly the same bare, monochrome red bricks.

So yes, the visit was very enjoyable, and King Ludwig II definitely a megalomaniac. Also, the woods and the meadows surrounding the palace are stunning, so make sure you have enough time for a walk through the leafy trees.

After a brief walk through the leafy trees (which, needless to say, we made sure we had), we returned to the ferry terminal, and off we went to our next stop, which, as you may guess if you’re familiar with the Chiemsee area, was Fraueninsel (Women’s Island). 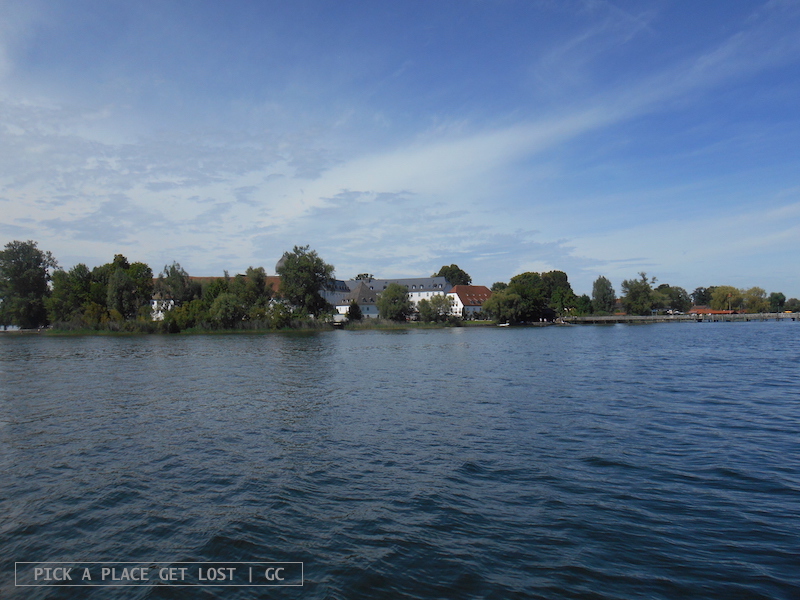 As soon as I got off the ferry and had a look around, one question sprang to mind: why on Earth is there a sumptuous Versailles palace on Men’s Island, while the largest and main building on Women’s island is a monastery? Blame it on the old days.

We lay our blankets on the grass and had a homemade sandwich picnic, while a duck cautiously tried to make friends with us (especially with Andi). Then everybody fell asleep. I didn’t, so off I went for a walk down the path along the shore. The island was crowded with tourists and locals, yet you could barely hear their voices. It was incredibly silent, and the shore was full of quiet spots, tiny private piers, and holiday homes overlooking the lake. 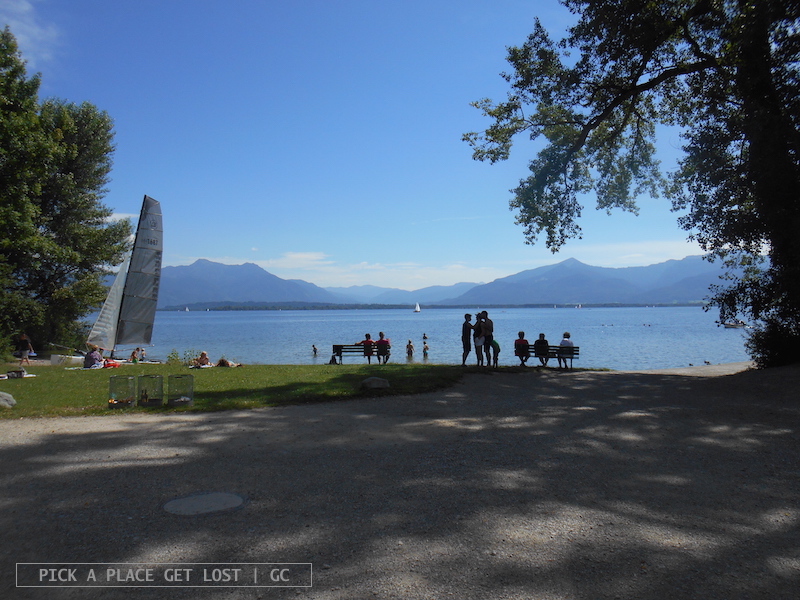 I strolled happily around, soon joined by Andi, for a good twenty minutes, only to realise at some point that I had already seen those buildings and those piers. That’s because we’d walked all the way around the island (which also tells you how small it is), and had begun a second lap.

The view from the shore, though, was still beautiful. The silvery water matched the grey of the sky, which by the time the guys dozed off had clouded over. The lake surface was dotted with sailboats that looked like they were sliding along. 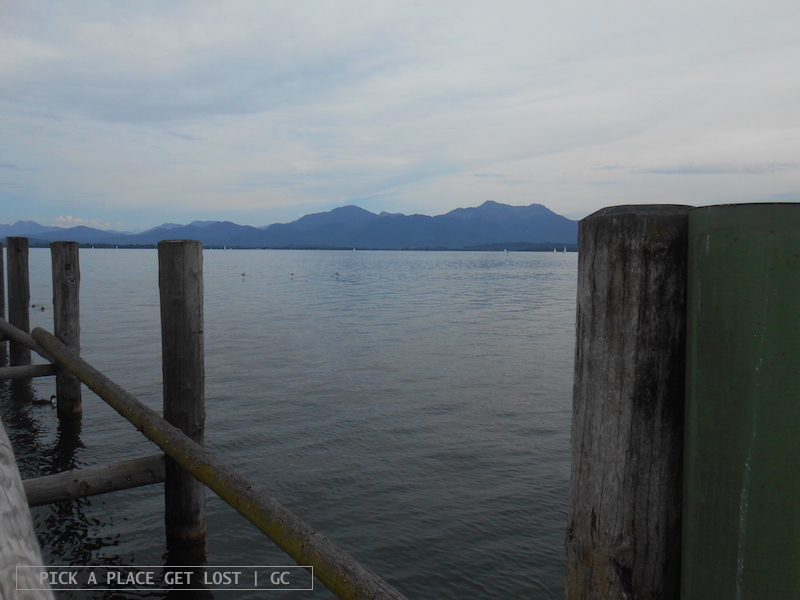 Plus, you know when you’re walking around in (almost) any city centre in the world, and squares and roofs are always crowded with pigeons? Okay, replace pigeons with ducks, and you’ve got an idea of what Fraueninsel looks like. I mean, ducks are literally everywhere, effortlessly cool in their wandering about the path or walking in neat rows in the grass. I love ducks.

When everybody awoke from their power naps, we headed back to the mainland, the sky by then heavily overcast. Our Chiemsee experience, though, was far from over. Andi drove us to some other place around the lake, i.e. a sandy beach whose exact location he himself barely knew. 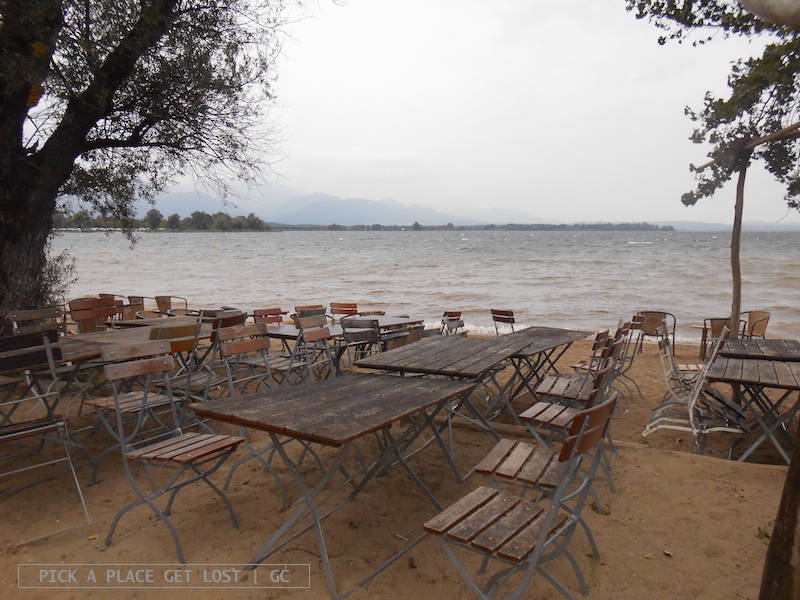 By the time we got there it was windy, drizzly and cold, but not even that prevented us from sipping the red wine Andi had in his rucksack while dipping our feet in the icy cold water. To top our afternoon, we had quality ice cream at an ice cream parlour in the area, picked up a friend of Andi’s at his place, and then drove back to Andi’s in the raging storm. 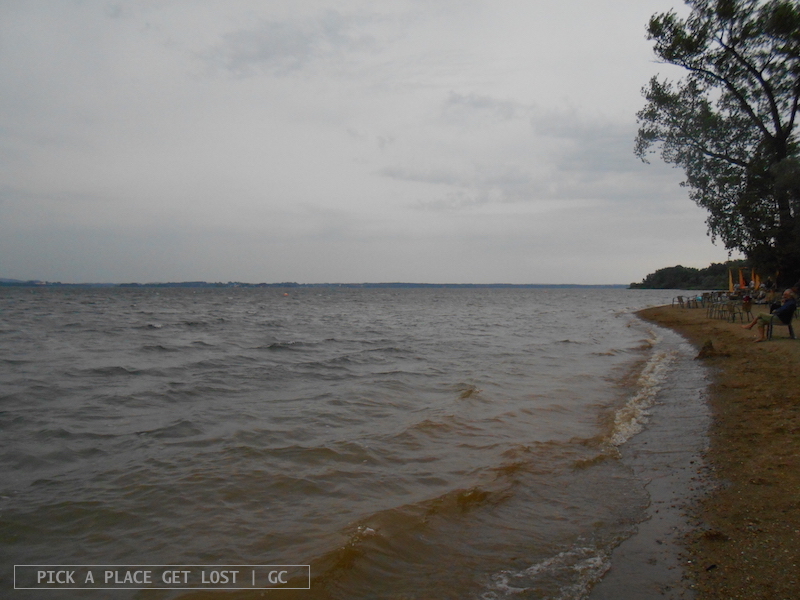 Nothing warms you up as the comfiness of a Bavarian wooden house and an enjoyable dinner in good company. Put the two things together, and you have an accurate picture of our Saturday night, which went very quickly between random talk about any imaginable topic (EU, Brexit and US elections included) and the occasional glass of beer (at times truly indispensable in order to discuss some of those very topics). Literally one of the best Saturday nights I’ve ever had.