Chronicle of a very awkward hike around Dalsnuten, near Stavanger, Norway. A quick summary of how to not hike unexpectedly, and a few words on how beautiful the view from the top was!

I went to the Tourist Office first thing in the morning (after an actual good night’s sleep) to collect maps, leaflets and recommendations on ‘day trips or hikes in the area. Nothing too demanding, I’m not that much of an expert’. The young woman at the desk was very friendly, and loaded my rucksack with maps, leaflets and recommendations. ‘The bus to Preikestolen was running until yesterday, so now, unless you have a car, you can’t really get there’.

‘But Dalsnuten makes for a nice hike in the surroundings’, she said. Her words stuck with me as I left the office. No hike to Preikestolen, then. But Dalsnuten sounds cool. 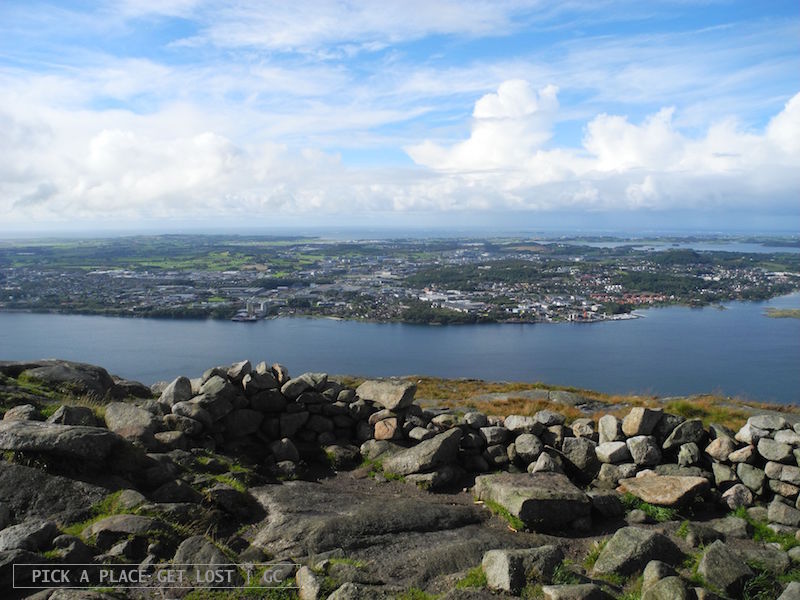 The long way to Dalsnuten

Even the simplest things about this hike were harder than usual. Like, taking the bus: not the toughest accomplishment, right? Well, turned out, to reach the starting point of the hike to Dalsnuten one bus was not enough. I had to take one bus, wait at Sandnes bus station for a good thirty minutes, take a second bus and get off at the final stop.

After which, once the bus had left, I realised I was standing in the middle of nowhere in the pouring rain (of course it started raining as soon as I got off the bus), there were no signs, and I had no clue about anything, only a growing feeling that something was not right.

I went for the trail uphill at first, but really, it was going nowhere, and no one to ask for directions. I thought I should have got off at some previous stop (who knew which). So I started walking down the main (and only) road, following the bus route in the hope that some ‘Dalsnuten’ sign would show me the way.

Some twenty minutes later, nothing had changed. I was surrounded by all shades of green on all sides. From above, the road must have looked like a zigzag crack in the greenest of surfaces. It was beautiful, but like: where was the hiking trail? 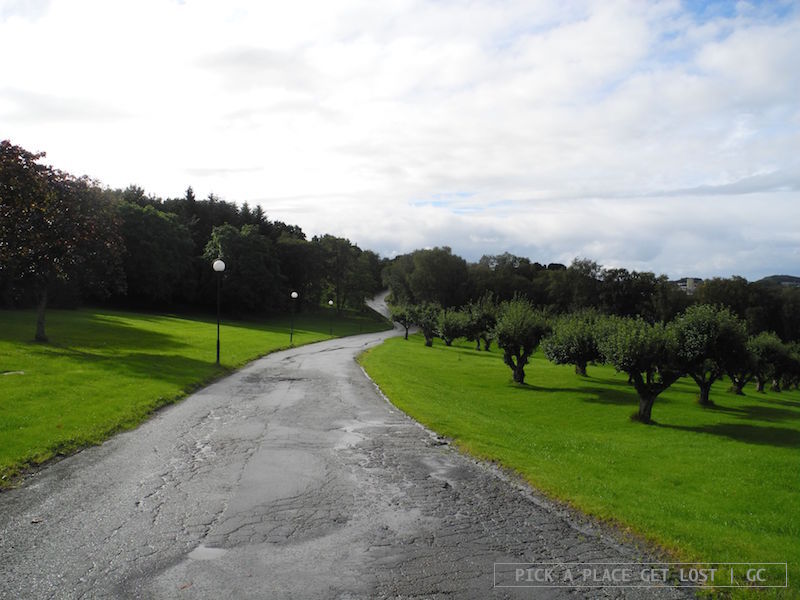 A person! A human being!

I instantly went off the main road, running for a wooden building. I saw a person! Norwegians really are the kindest to travellers. This woman was working in her office when I asked for directions, and she went upstairs to speak to a colleague, who checked the way to Dalsnuten on Google maps and printed off a map for me. I love you people.

I was super excited when I left the two. I knew where I was going! At the first junction I made a left turn, kept walking and, right there in all its whiteness, the Dalsnuten sign. Thank you. Let the hike begin. 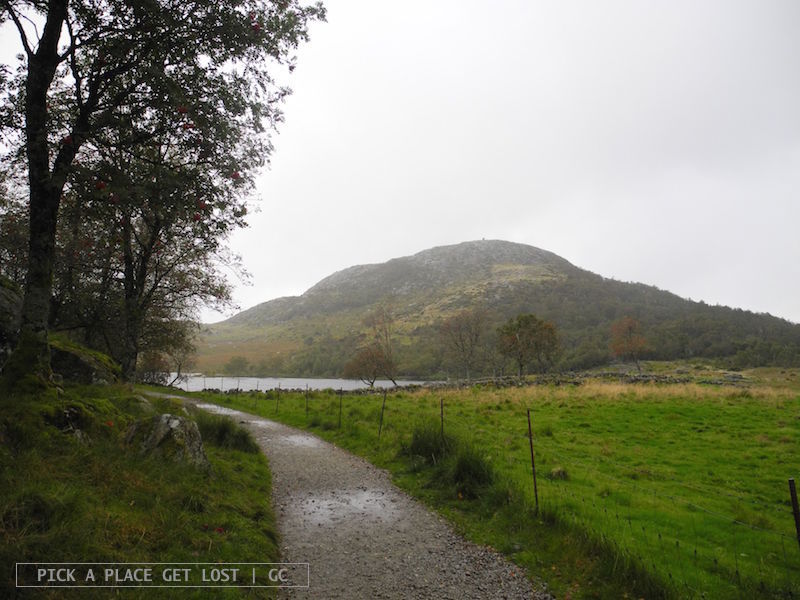 The first thirty minutes were exactly as I expected: thick woods, flat spots with lakes, increasingly narrow paths. I love the colour of the water when the sky is overcast. It’s a mix of blue, black, green and grey which, put together, give the surface the most intense shade of a colour you can’t quite identify. Such was the colour of the larger lake I came across when it started raining again, and quite hard. I had only just waved hello to three fellow hikers when the path suddenly grew steeper. I mean, steeper.

The path grew more even, less muddy, then steeper again. Okay, then it grew very steep and very muddy.

I kept walking again, although at that point I felt it was getting potentially risky. I was completely alone, and there was mud everywhere. If I fall down the slope and get hurt, I thought, there’s no way I can call for help. There’s no signal. Yay me. 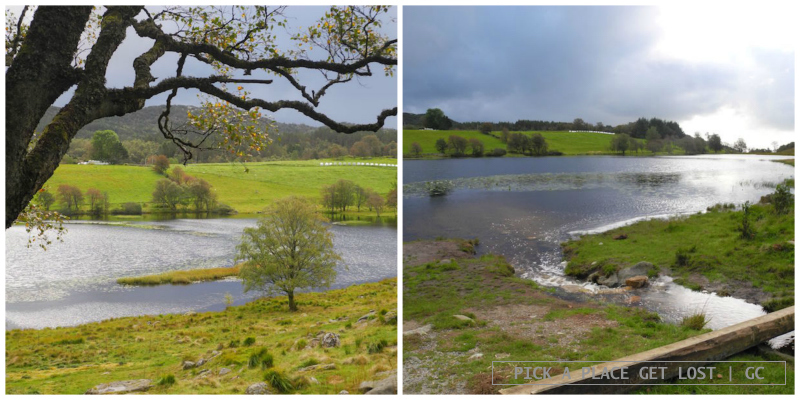 At that point each step was taking ages. I was sort of awkwardly half walking half climbing, there was no path, only slippery rocks and slippery grass that formed a poorly sown patchwork blanket. I had no idea where I was going, the only familiar sign being an orange T-shaped sign painted on the rocks.

Which is when it dawned on me: BLOODY HELL I’M CLIMBING A MOUNTAIN. I’m actually getting to the actual top of an actual mountain. Dalsnuten is the name of the peak. And the Tourist Office woman said it was an easy hike. Honestly.

Ok, I had to stay focused. I had to keep going at that point, right? And, somehow, I did stay focused and I did keep going. The last few steps were the toughest, but there was no way I was going back.

Ohmygod. I’m standing on top of a mountain, I thought. This is what a 360-degree view from above looks like. That is Stavanger, over there. That is the sea, that way. Ohmygod, and the rainbow. This is too much. Too much beauty, too much greatness, too much perfection. I don’t recall ever being as overwhelmed by nature as I am now, I said to myself. I was kneeling down rather awkwardly on the rocks. The wind was so strong it was almost deafening, and my wet hair was freezing on my head. The sky was blue, the sun was shining, as if to add to the scenery the warmest shade of gold. 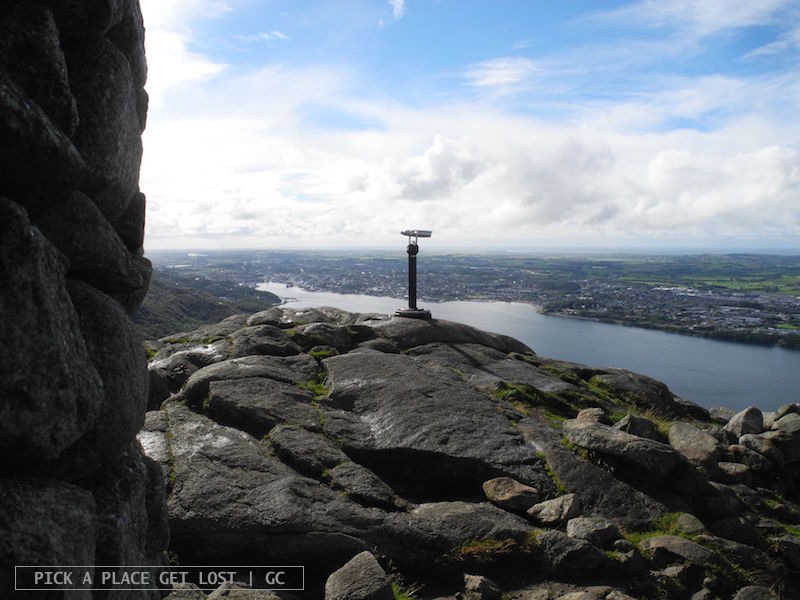 Some things you just can’t put into words.

I sat there still, frozen (in so many ways), for as long as the wind permitted. I had no idea how to get back to Stavanger, but right then it didn’t matter. All I could think was, I want to do this again, and multiple times. I love hiking.

I eventually did manage to get back to Stavanger. I slipped and landed in the mud on my way back, then I slipped again, then I almost slipped a third time. But I did return to the main road. At the bus stop I waited forty minutes or so for the bus, and had the most pleasant chat with a young Norwegian girl, who eyed me suspiciously when she arrived at the bus stop, and then asked me if I was an adventure photographer. If only. I liked the way she spoke (in flawless English) about her country. She was curious about the world, but she was also curious about Norway, and loved the mountains, the fjords, the sea.

It took me a while, but I safely arrived back in Stavanger early enough to buy food for dinner. I was still slightly overwhelmed by events as I (slowly, very slowly, I had sore muscles like never before) walked uphill back to the hostel. I was knackered. But as happy as I’d rarely been in my life. 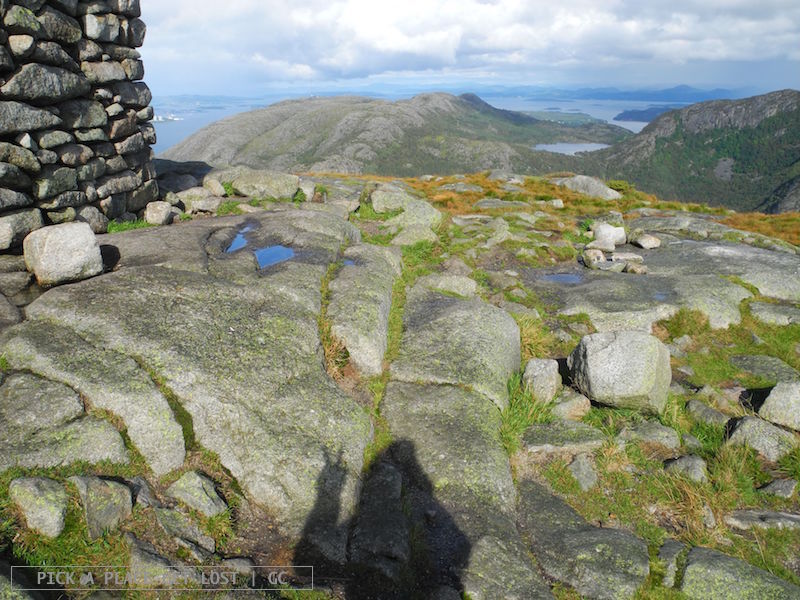 Laying in bed after dinner, I googled ‘Dalsnuten’ to learn more about the hike I’d just been on. Turned out (as I expected), it was an easy hike, and the mountain was only 324mt high.

If it hadn’t been so muddy and slippery, or if I’d been wearing hiking boots, or if I’d known more about the trail(s) to the top, it wouldn’t have felt so adventurous. I’d been to the mountains several times in my life, and I’d often gone hiking before the Dalsnuten hike, but I’d never gone hiking all on my own, plus I’d always been around with someone that knew the trail like the back of their hand.

So yes, if I’d known more about the Dalsnuten hike in advance I’m not 100% sure I would have gone for it. With hindsight, I’m so grateful I did.