The trip to Suomenlinna sea fortress, just off Helsinki mainland, is only one in countless day trips you can take from the Finnish capital. Nevertheless, it’s one day trip you really should want to take. Here’s why!

Suomenlinna is one of the main attractions in Helsinki (and, possibly, the whole of Finland). It is a sea fortress located on a bunch of islands just off the Helsinki coast. It’s so special that in 1991 it was listed as Unesco site for being ‘a unique example of the military architecture of its era’.

Suomenlinna means ‘the castle of Finland’, and it’s a true classic when it comes to Helsinki day trips. The site makes for a truly authentic display of Finnish history, culture and architecture against a backdrop of stunning nature. Suomenlinna is also a district of Helsinki, and it has around 800 permanent residents, so it is much more lively than one might expect.

In fact, it has six museums, its fair share of cafés and restaurants (all different in style and cuisine they offer), multiple monuments and sites of interest (e.g. the Kustaanmiekka bastion area, the dry dock, and a restored submarine), which are testimony to its rich history.

Last but not least, it offers truly spectacular views of the sea and the Helsinki cityscape. Walk a stretch of the bastion area to King’s Gate, or head down to what is virtually the only strip of sandy beach on the whole island, and see for yourself! 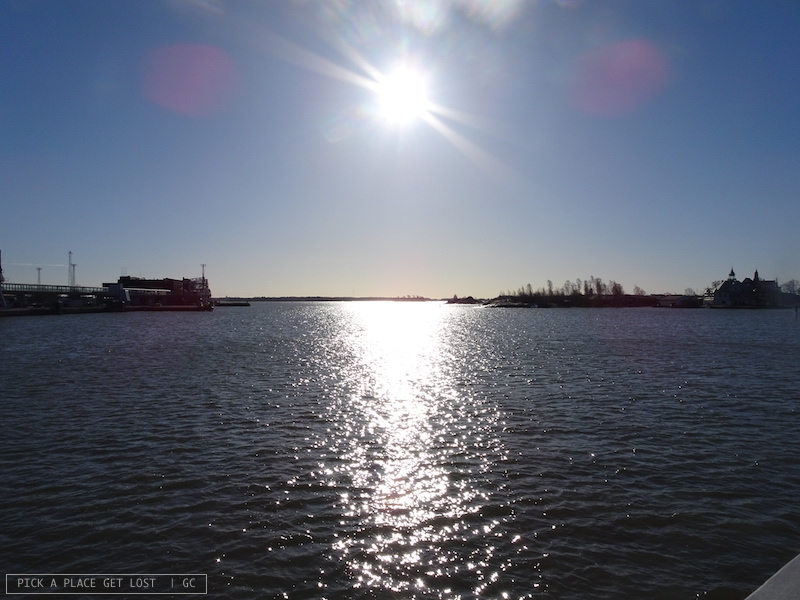 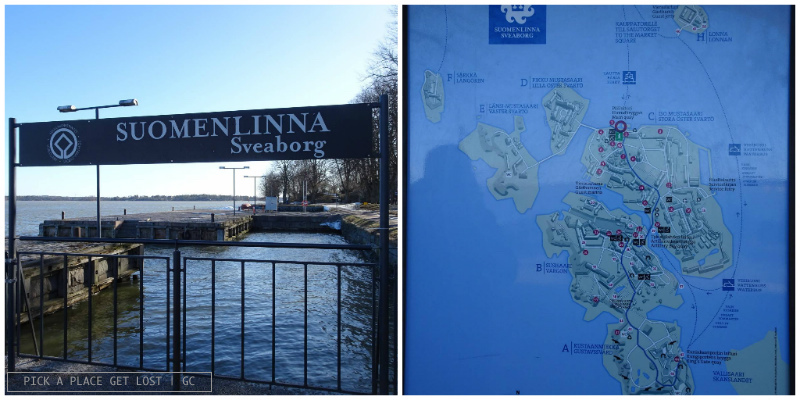 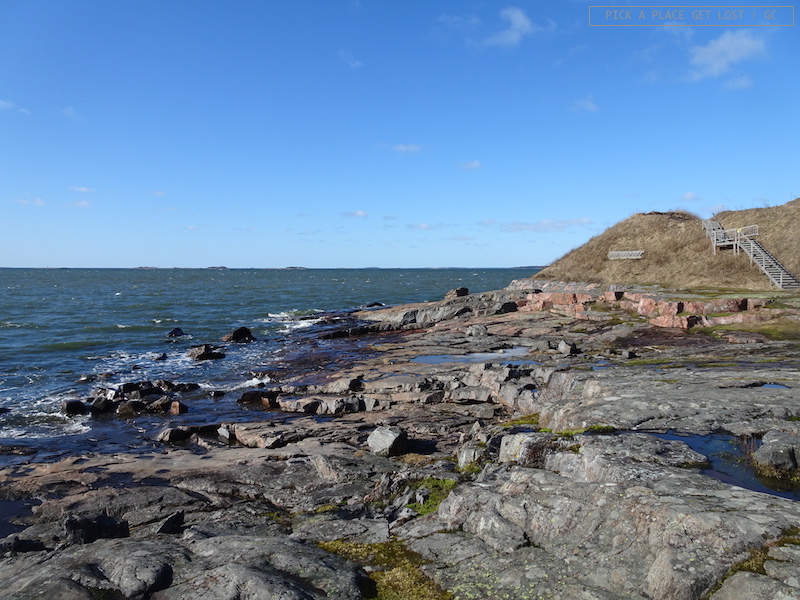 The regular ferry service between Helsinki mainland and the island operates 365 days a year in all weather conditions. In Helsinki it leaves from and arrives at Market Square (Kauppatori), across the square from the Parliament building. On Suomenlinna it arrives at and departs from the main pier of Iso Mustasaari island, on the northern shore. The ferry journey lasts about 20 minutes.

Though Suomenlinna does have a lot to offer all year round, summer is the time of the year when it is ‘fully operational’. Some of its museums are only open in the summer season, which is also when a water bus service is scheduled in addition to the standard ferry trips. Unlike the latter, the former sails out of Market Square straight to King’s Gate, plus it makes extra stops at Vallisaari and tiny Lonna island.

A bit of history

Suomenlinna (initially known as ‘Viapori’) was built in the mid-18th century, when military officer and architect Augustin Ehrensvärd began the construction of the fortress as a defence against Russia.

Except, between 1808 and 1809 Finland was handed over to Russia by the Swedes, and Viapori with it. Finland became an independent grand duchy, but it was de facto ruled by Russia. Incidentally, it was during the Russian rule (which lasted for about a century) that the capital was moved from Turku to Helsinki.

Finland eventually became independent in 1918, and so did Helsinki sea fortress, which was then renamed Suomenlinna. 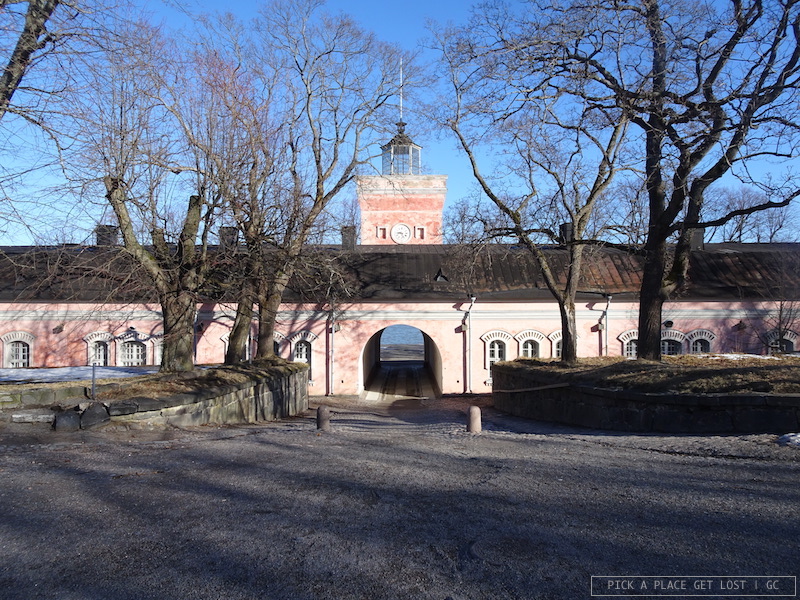 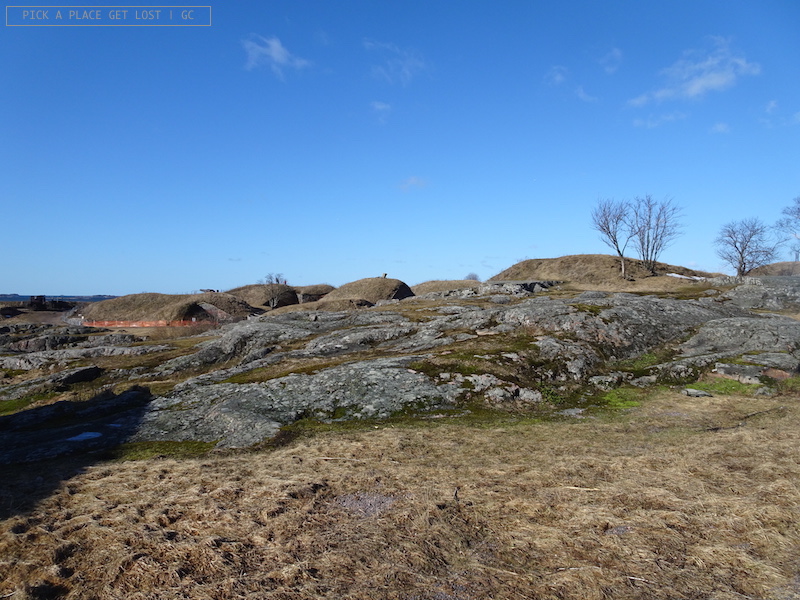 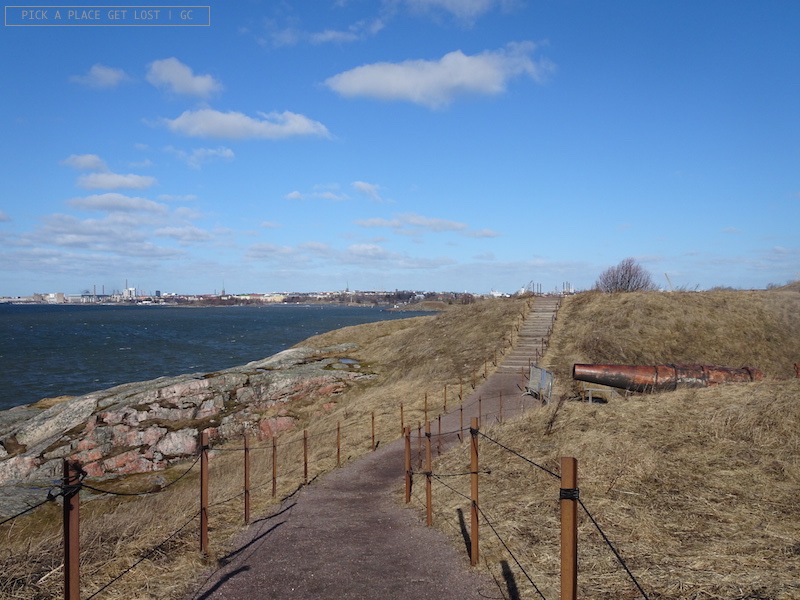 As I mentioned above, the Suomenlinna ferry will drop you off at the main pier on Iso Mustasaari.

As you step off the ferry, I would suggest heading straight to the visitor centre, which is located very close to the ferry stop. You can grab a map, and also visit a small exhibition about the island. It’s not that you cannot visit Suomenlinna without a map. It’s quite handy, though, in that it gives you an idea of the routes available for the visit, the main points of interest on the islands, and the cafes and restaurants along the way.

The ‘standard’ route is marked in blue on the map: it starts by the ferry stop, and takes you all the way down to the southern coast of Kustaanmiekka island.

The main sights include: Suomenlinna Church, the museums (e.g. Military Museum and Suomenlinna Museum), the Dry Dock, the Great Courtyard (with Ehrensvärd’s Tomb and Ehrensvärd Museum), Vesikko Submarine, and the bastion area. King’s Gate marks the end of the trail, and it makes for a perfect viewing spot over Iso Mustasaari and Vallisaari islands. 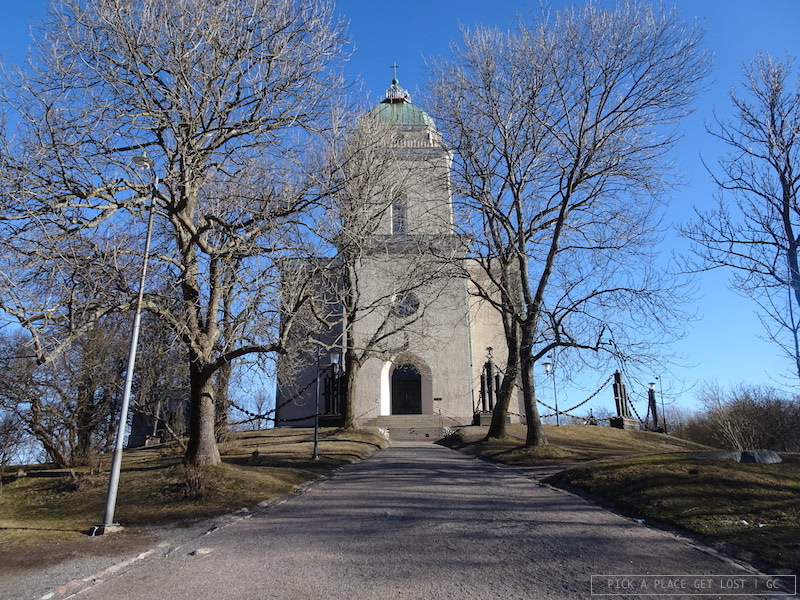 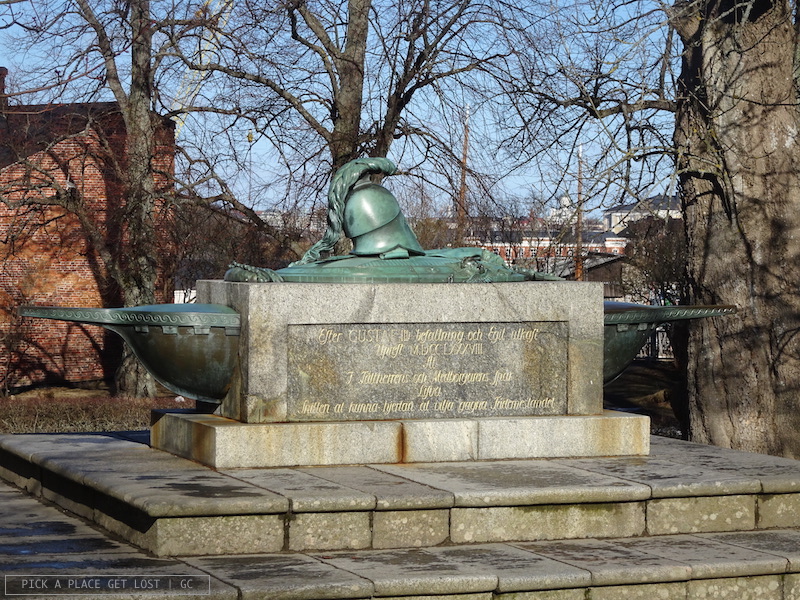 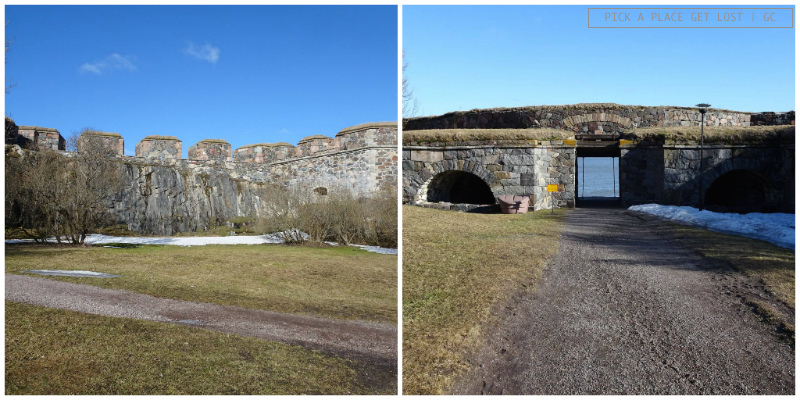 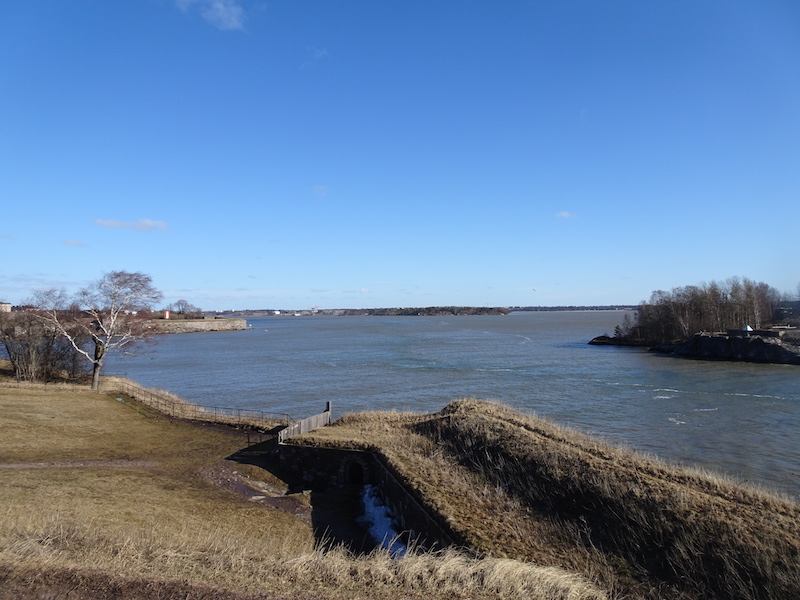 I find the south-western side of Kustaanmiekka especially stunning. That’s where you find the bastion area, the one beach on the island and, needless to say, the most breathtaking views.

Normally the bastion area (which dates back to the 1850s) can be walked on foot in its entirety – or, at least, so I understood. When I visited, the ramparts were being renovated in places, so some areas were not accessible.

As for the beach, it amounts to a narrow strip of sand nestled in a small bay. It can be reached via a steep wooden staircase. When I was there, the beach was covered in snow, and large bits of ice were floating and crashing against the seashore. The view was mesmerising.

You can’t really get lost on Suomenlinna, especially if you stick to the main path – which I strongly advise you to for at least two reasons: 1) to avoid unnecessary risks, and 2) to contribute to preserving nature on the island. 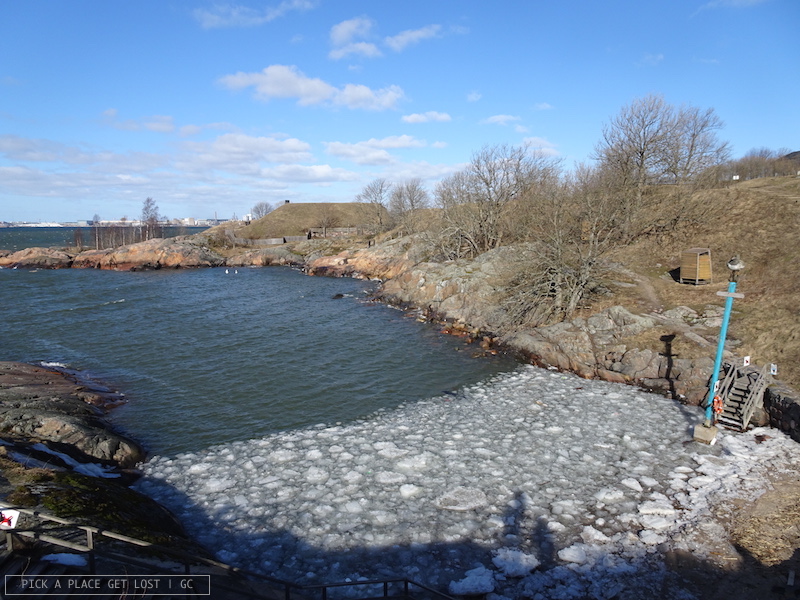 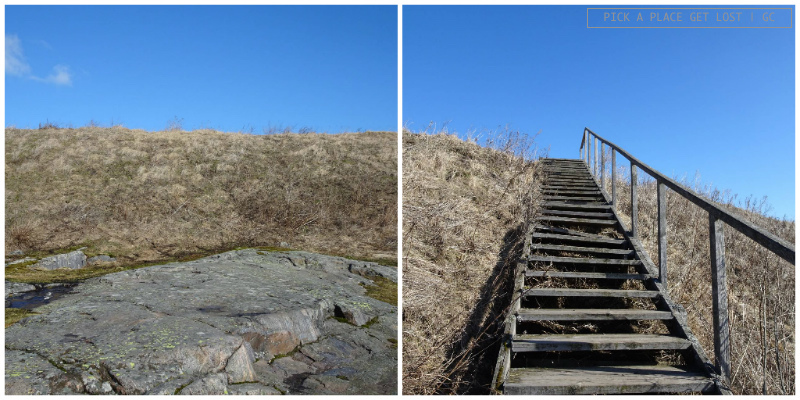 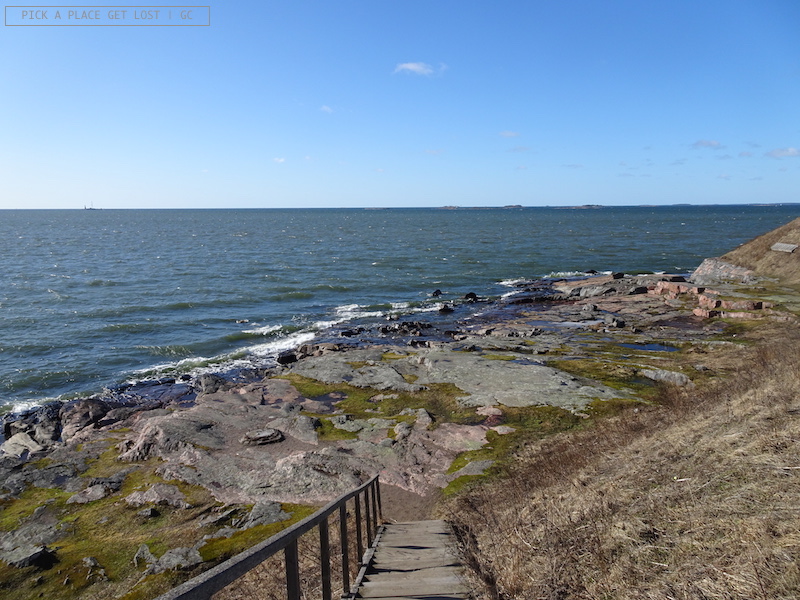 In fact, wherever you head when visiting Suomenlinna, if you do venture off the main path, make sure you keep to the fenced trails, especially in the bastion area and around the beach. If you venture down to the rocky seashore (also accessible in places), be super extra careful: the rocks do get uber slippery, and the strong winds, and the odd patch of ice or snow might make it even more dangerous to stand there!

To return to the ferry stop you can simply walk back via the same route. Alternatively, and if you’re not in a hurry, you can go check out the Velikko Submarine or the Dry Dock, which are situated a bit off the blue trail. Or you can eat, drink or chill in one of the cafes and restaurants on the islands.

Or maybe you can just choose a viewing spot, sit on the grass, and contemplate the view. One thing I can tell you: you’re never going to get enough of it. 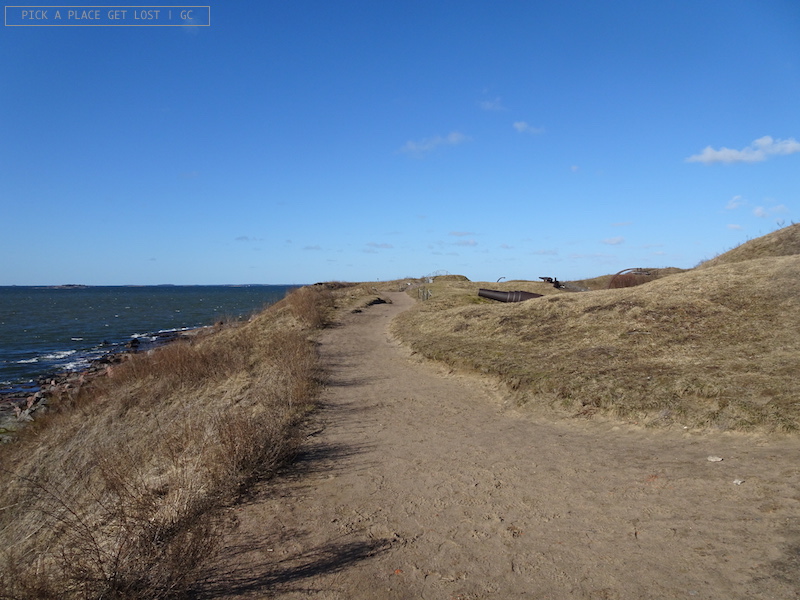 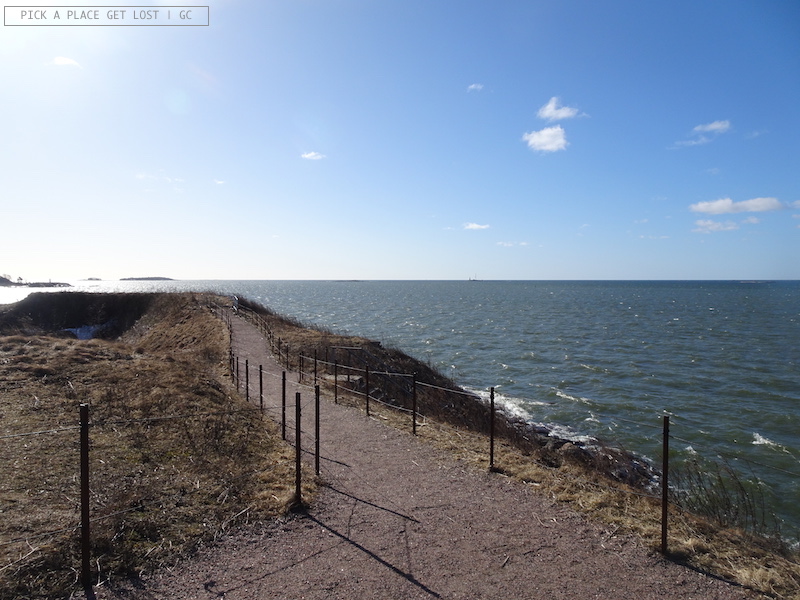 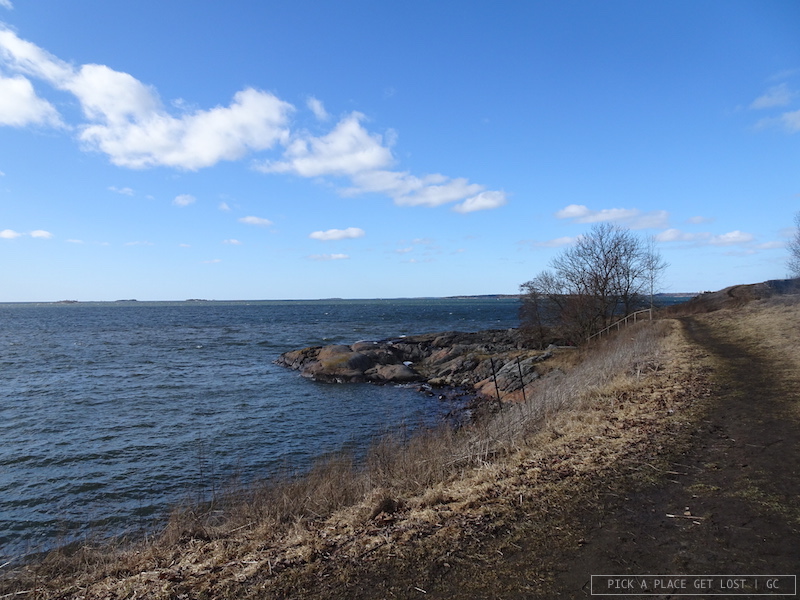