As with everything connected with my road trip around Slovenia, I loved everything about the Slovenian coast.

Slovenia has only 40-something km of coastline, squeezed between Italy and Croatia. It is very little if you think about it, yet the area is so rich and diverse that it will most likely blow your mind.

We drove down to the coast straight from Soča Valley, and only stopped once along the way to visit Škocjan Caves (more about it in the next post). Aside from that, we went straight from rugged mountains and turquoise waters to maritime pines and sunsets by the sea. That was (and felt) already mindblowing enough to me.

What’s more, the Slovenian coast is and feels a lot like Italy. In fact, more often than not shops and road signs are bilingual (Slovenian/Italian), and if you order a ‘coffee’ you’re very likely to be served a ‘caffè’! I felt so close to home. 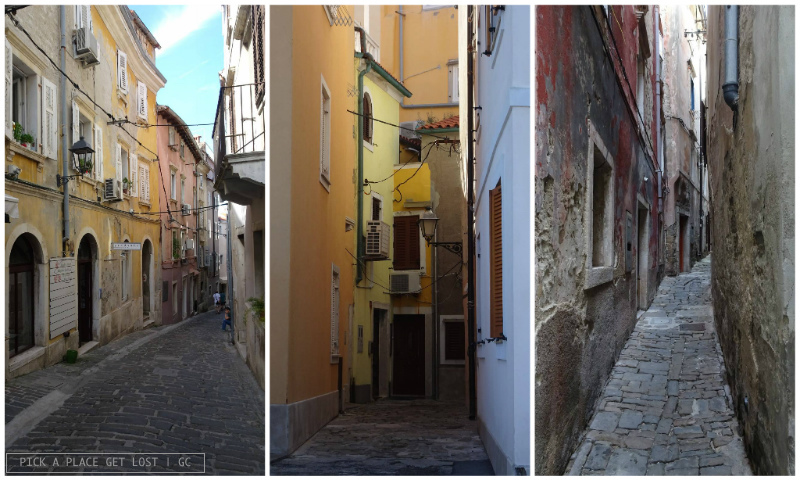 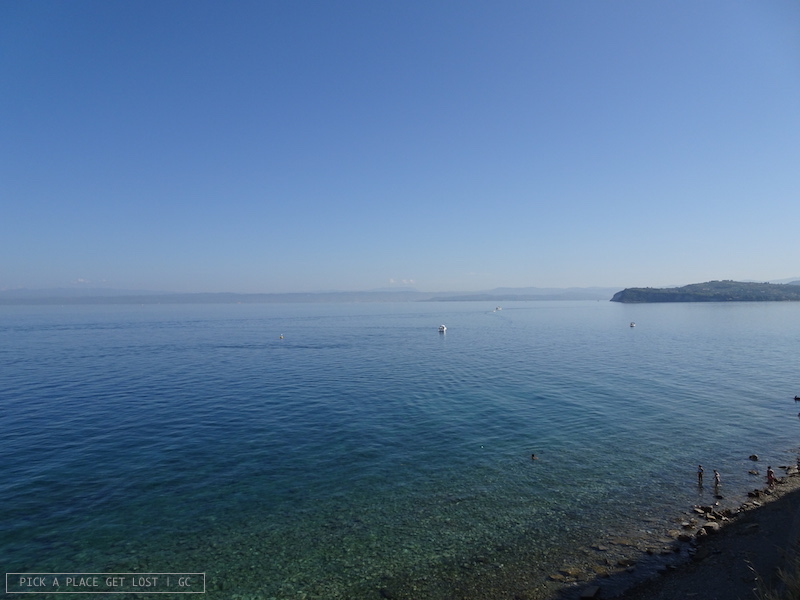 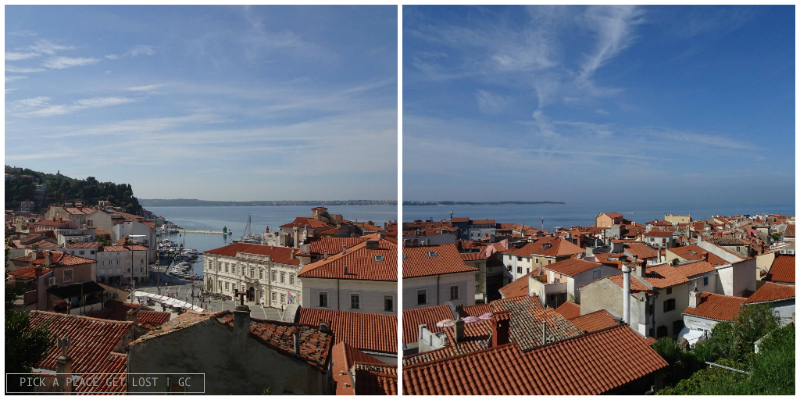 Because we had a pretty tight agenda, we couldn’t afford to spend more than one day by the coast. As a result, I have plenty of entries on my to do list for the next visit to the coast: Koper, Izola, and the Parenzana Trail, to name a few.

The most famous seaside towns in Slovenia are probably three: Koper, Portorož and Piran.

Koper is technically the largest town on the Slovenian coastline, but to us it was The One We Did Not Visit This Time, or The Third One.

So, needless to say, I’m not going to write about it. Just not yet. In fact, in this post I will only dwell on the two places I’ve actually been to: Portorož and Piran. 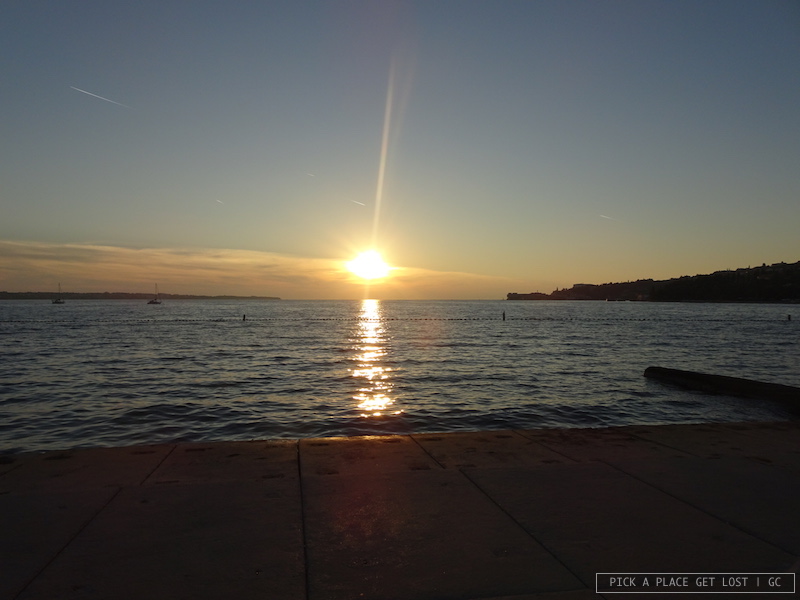 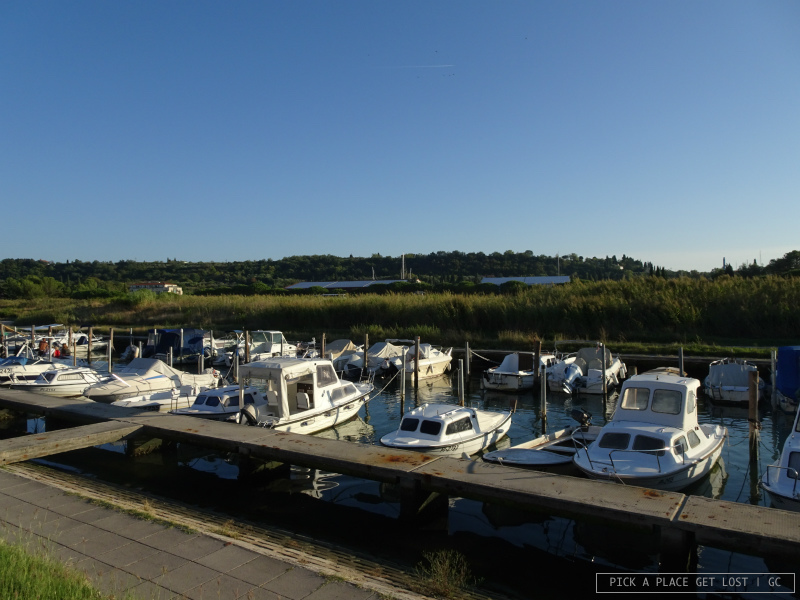 Piran is The One That You Cannot Miss. Known as ‘the Venice of Slovenia’, it sits at the very tip of a narrow peninsula, which location is already enough to make it unique.

Piran is exceptionally popular, and therefore crowded with tourists, especially in the high season. You really cannot blame them, given the charm it exudes.

When we visited in early September, it was indeed still high season. I’m usually bothered by large crowds, but with Piran not even that spoilt the impression I got: it is hands down one of the most picturesque towns I’ve ever visited.

In fact, Piran is one of the most well preserved historical towns on the Adriatic. It is allegedly named after the fires (pyr in Greek) that in ancient times were lit at the tip of the peninsula to guide the ships toward Koper.

Also, five centuries of Venetian rule explain the amount of Venetian Gothic architecture it displays, which, with some monuments, truly nears perfection. 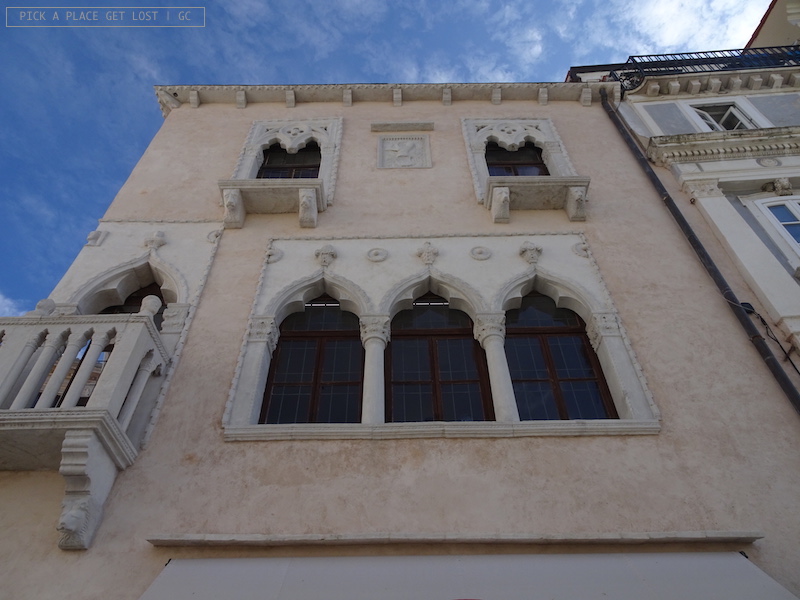 Just a couple of technical remarks before we take a good look around. One: Piran is not the cheapest destination you think about the Slovenian coast. That is to say, it is rather expensive, and not just in terms of car parks (see entry below), but also with regard to shopping, food, and accommodation.

Two: parking in Piran is next to impossible. Don’t expect to park in town: if you placed a bet, claiming that you can make it, chances are you’d have to pay for the beers.

I strongly recommend leaving the car in one of the car parks by the town entrance, and just head into town on foot. You can take Župančičeva ulica or Ulica Svobode, and keep to the inland. Or you can walk down Čankarjevo nabrežje along the seafront, from where you can appreciate the loveliest view of the town.

The key spots in town are Tartinijev Trg (Tartini Square), the Cathedral of St. George, Trg 1 Maia, and Punta. 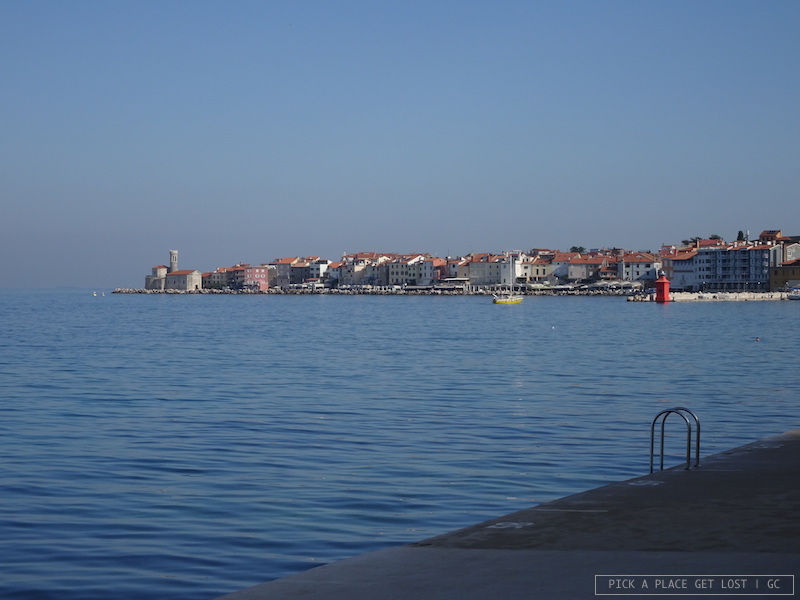 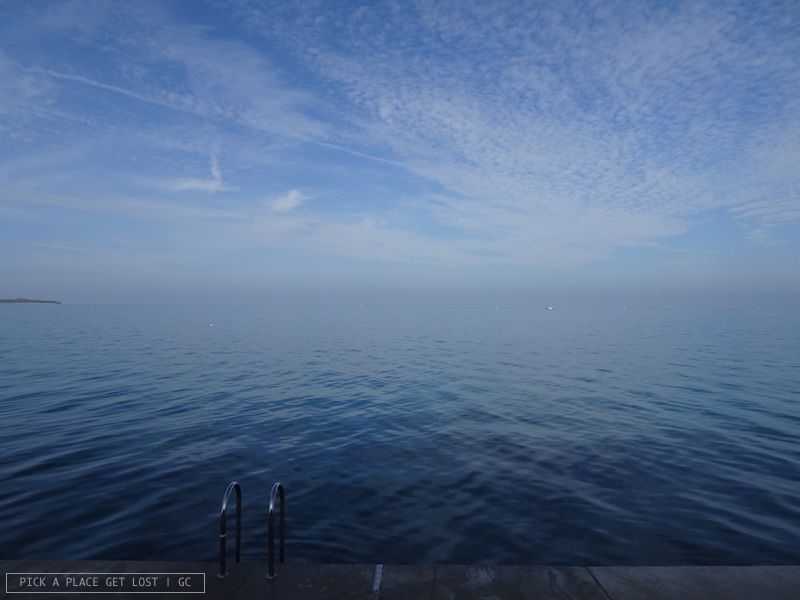 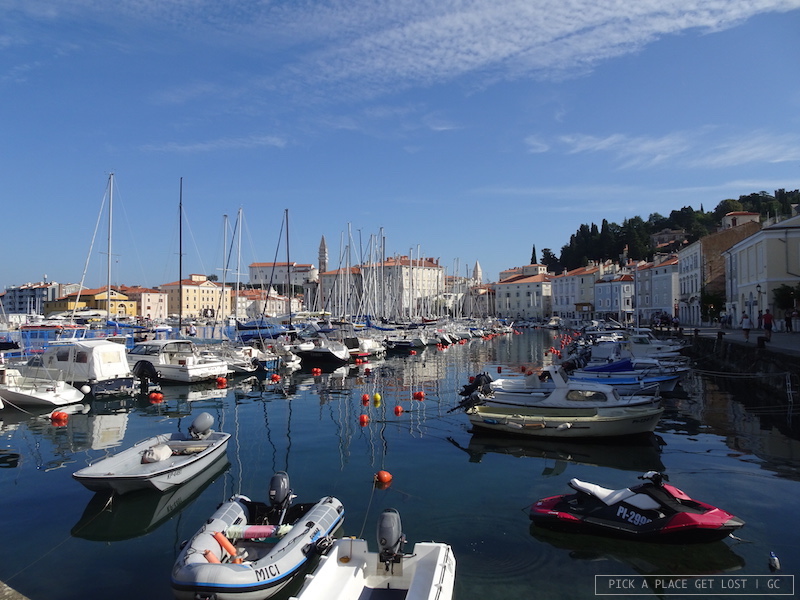 Tartinijev Trg lies at the heart of Piran, and is a true focal point in town. The square is framed by a number of historical buildings, all of which are especially sumptuous, elegant, and… white.

Now, this might sound like a silly remark on my part, but I do mean every word. If you visit Piran on a sunny day, make sure you’re wearing sunglasses when you step onto the square. The oval-shaped ‘eye’ of the square is marble-paved (white marble, of course), and the buildings on all its sides are either white or brightly coloured. The overall effect is almost blinding, hence my (seemingly pointless) advice about sunglasses the whole time. (And usually I’m not a huge fan of sunglasses.)

The square is named after Piran-born composer Antonio Tartini, whose ‘presence’ is virtually everywhere. There’s Tartini House, which was his birthplace and is now a cultural venue and a meeting point for the Italian community in Piran. There’s Tartini Hotel, which does not seem to have a direct connection with the composer but, being named after the square, is also named after Tartini himself.

Needless to say, there’s his statue in the middle of the square. It portrays Tartini as he strikes a pose for the keen photographer and tourist walking by. Last but not least, there’s the Tartini Festival of classical music, which takes place every summer, and consists of two weeks of concerts and events. 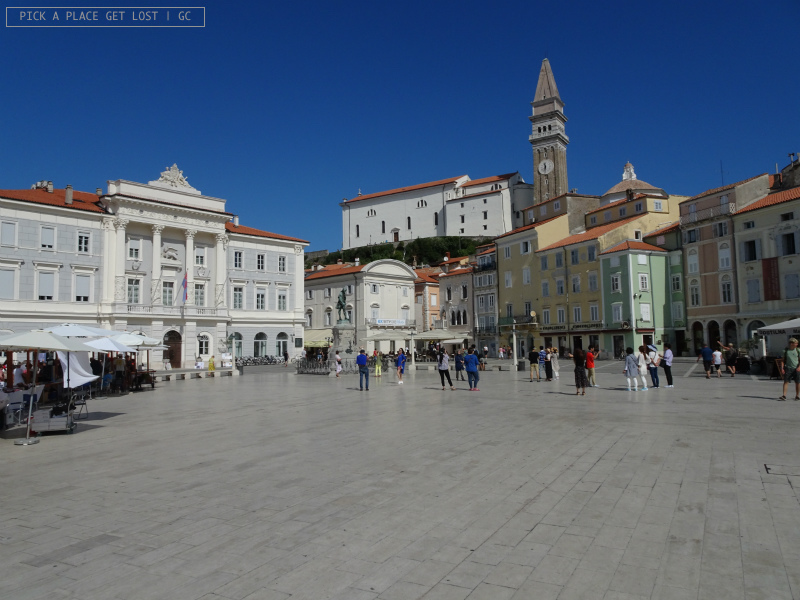 Other notable buildings overlooking Tartinijev Trg are:
– the Venetian House, Venetian by name and in fact, since it makes for a superb example of Gothic Venetian architecture.
– the Church of St. Peter
– the Court House and the Municipal Hall (which is home to the tourist info centre).

The complex of St. George is very close to Tartinijev Trg. You can easily reach it by taking the cobbled street going uphill right behind the Venetian House.

The Cathedral of St. George, the baptistery and the bell tower are all situated at the very top of the hill.

The bell tower is one of the most iconic and most photographed monuments in Piran, and it’s enough in itself to justify Piran’s nickname as ‘Venice of Slovenia’. Erected in the early 17th century, it was clearly modeled on Venice’s Campanile di San Marco, to which it does bear quite a striking resemblance. You can also climb the stairs to the top, and enjoy the most breathtaking view! 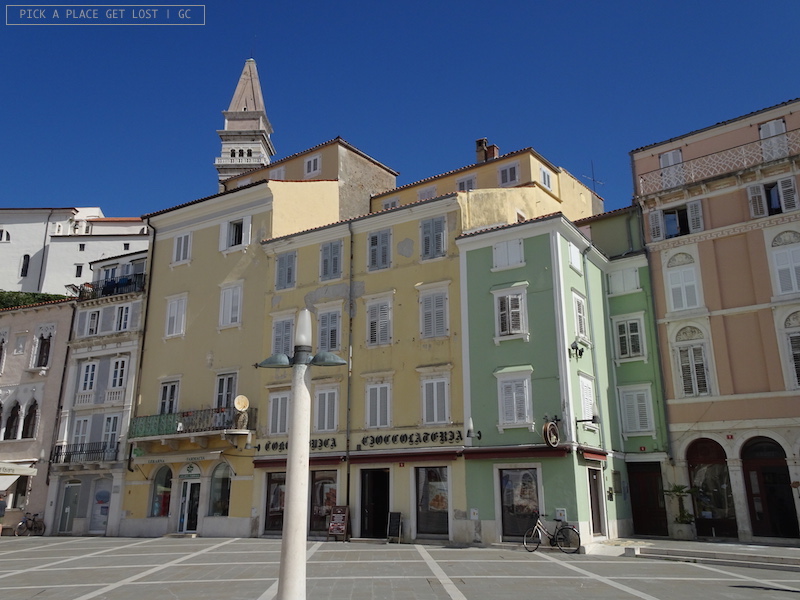 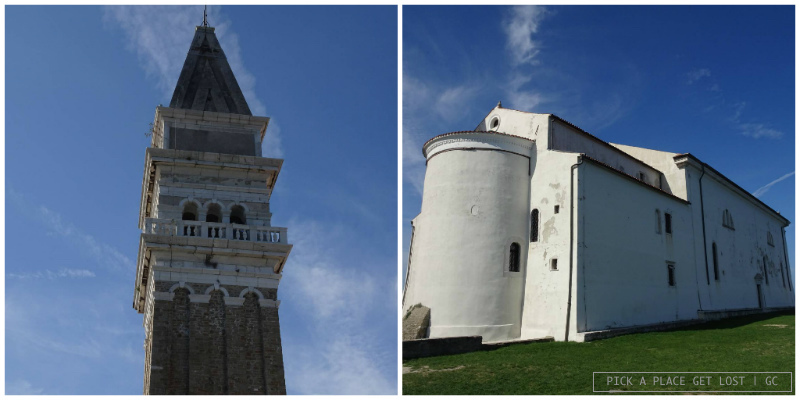 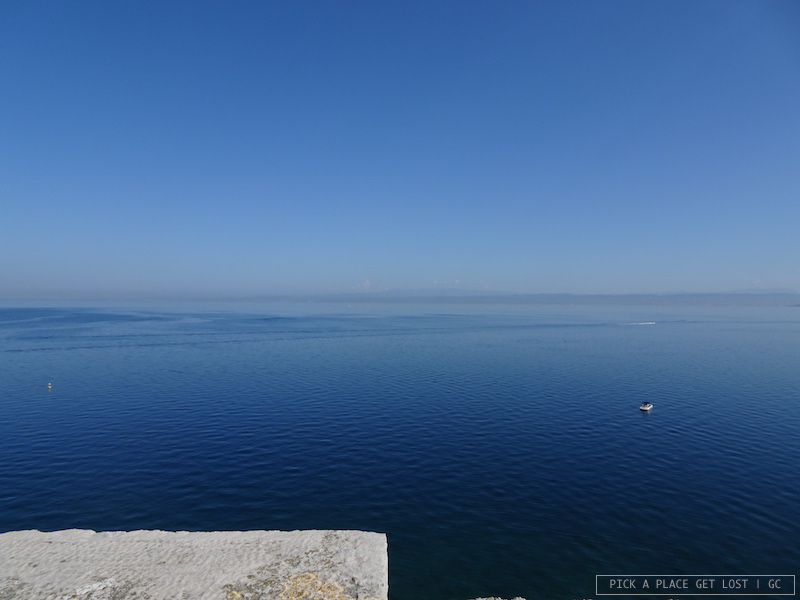 Another Piran spot you don’t want to miss is Punta, the very tip of the peninsula. Punta, in fact, means ‘tip’ or ‘point’ (also in Italian).

The beautiful whitish building you find there is the Church of St. Clement. The complex, originally built in the 13th century but renovated at a later stage, is objectively quite unique, impressive, and picturesque. Its round-shaped tower apparently reminds of the lights that shone there in the old days, those the town got its name from. It also gives the whole complex a somewhat exotic connotation, though that really is only my subjective perception.

I don’t really have to tell you that the view from the tip of the peninsula will take your breath away, do I?

On your way to Punta you might want to cross through Trg 1 Maia, formerly known as Stari trg (‘Old Square’). In the oldest days (i.e. until the Middle Ages), the square used to be the centre of Piran. 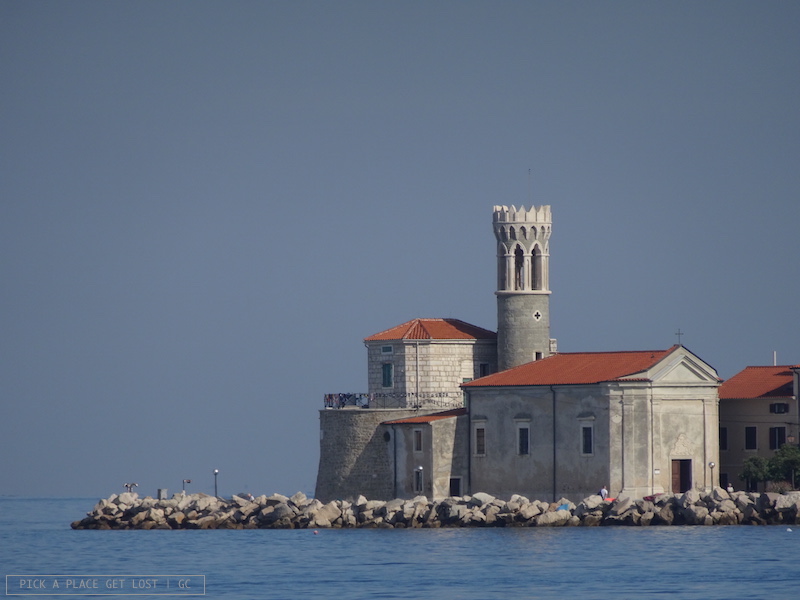 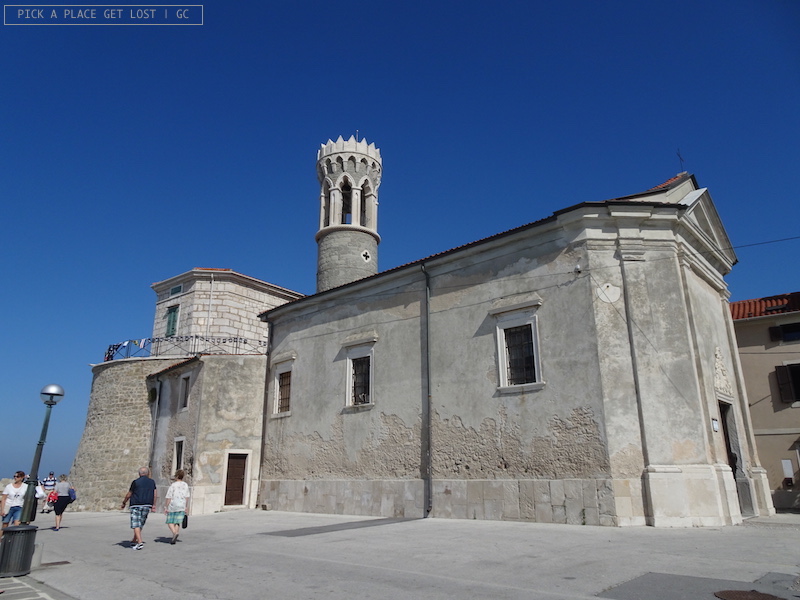 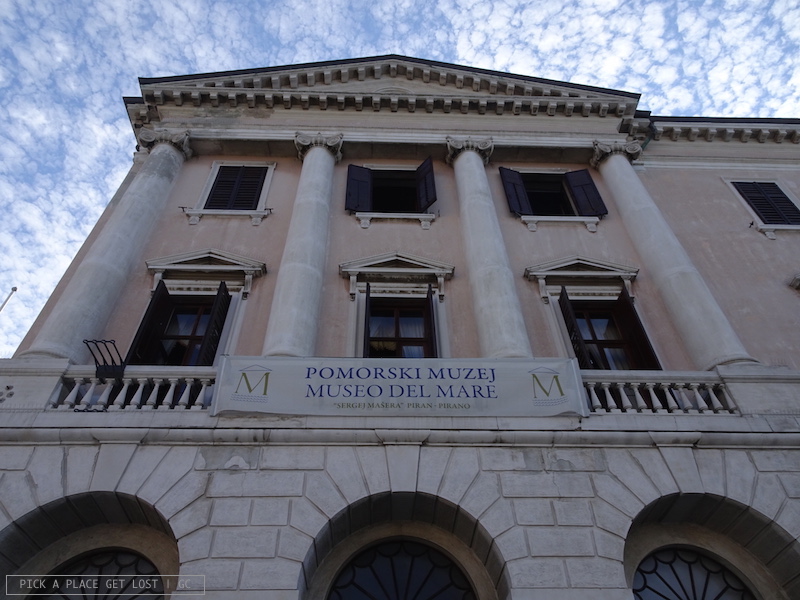 With some extra time on your hands (and/or if it’s your cup of tea), you can also visit Sergej Mašera Maritime Museum (Primorski Muzej in Slovenian, Museo del Mare in Italian). Headquartered in Gabrielli Palace, near the harbour, the museum is focused on multiple aspects of life by the sea, from sea-related activities (e.g. fishing trade) to the naval history of Slovenia.

I didn’t have time to visit the museum, but if and when I go back to Piran, this will definitely be high on my to do list.

Last but not least, I suggest checking out at least some of the local shops selling souvenirs, handicrafts, and local products. I found both those and the small market on Tartinijev Trg very characteristic!

Aside from all the places of interest mentioned so far (and the numerous beaches scattered here and there along the bay), the best way to grow familiar with Piran is by getting lost in the maze-like bundle of narrow alleys and side streets that make up the town, which lead to narrow passages and small courtyards when you least expect it.

In fact, everything is worth seeing and photographing in Piran. Wandering even its most nondescript alleys is a delight for the eye, even more so when such alleys lead up to unexpected viewing spots overlooking the sea. True story! 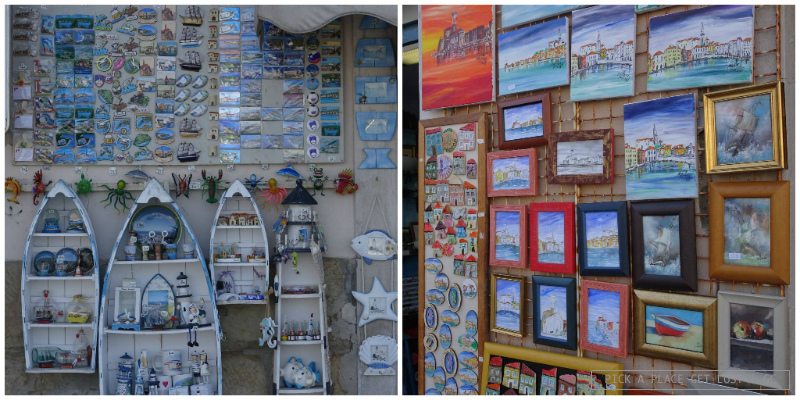 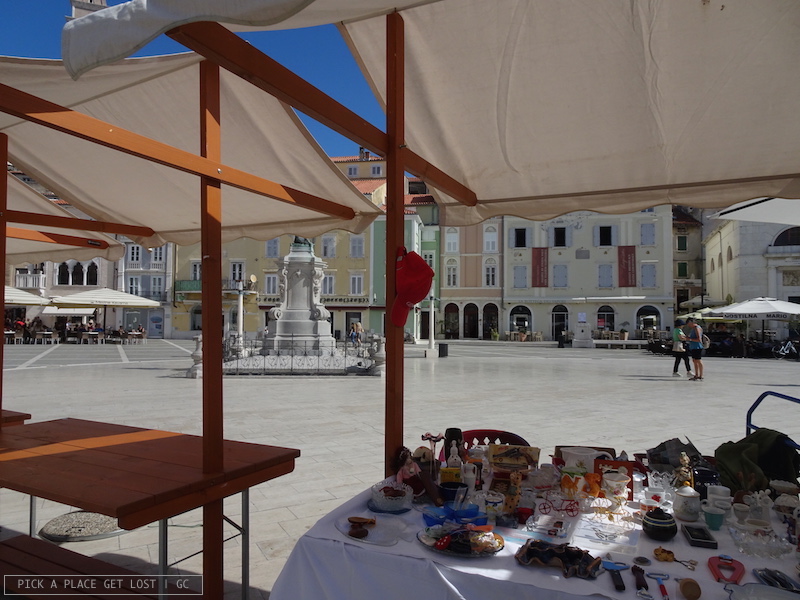 Portorož is The One That Is Not Piran And Is Cheaper than Piran.

Portorož lies literally next to Piran. In order to reach Piran you will have to drive through Portorož, even if you’re not planning on stopping there. It is, however, very different from its more popular neighbour.

Portorož is comparably much cheaper than Piran. Parking there is relatively easier and more affordable. The same goes for accommodation: chances are that, if you book your accommodation in Portorož, parking will be included in the room price.

Lower prices are one of the reasons we chose Portorož over Piran for our one-night stay. At first we did book a hotel room in Piran. Then we found out we’d have to pay an extra 15 euros for the parking lot, and the parking wasn’t close to the hotel (remember I told you there’s no way you can park in the city?).

So, since we could still cancel the reservation at no extra costs, we did it. Then we booked ourselves a room in a Portorož B&B instead, which was cheaper and parking was included.

(Because we had quite a low budget, that made the difference to us. That said, staying in Piran overnight, and seeing it in the evening must be so unique.)

Our B&B was not even remotely close to the centre of Portorož or the sea promenade. In fact, it was located in Lucija, a small village just outside Portorož. 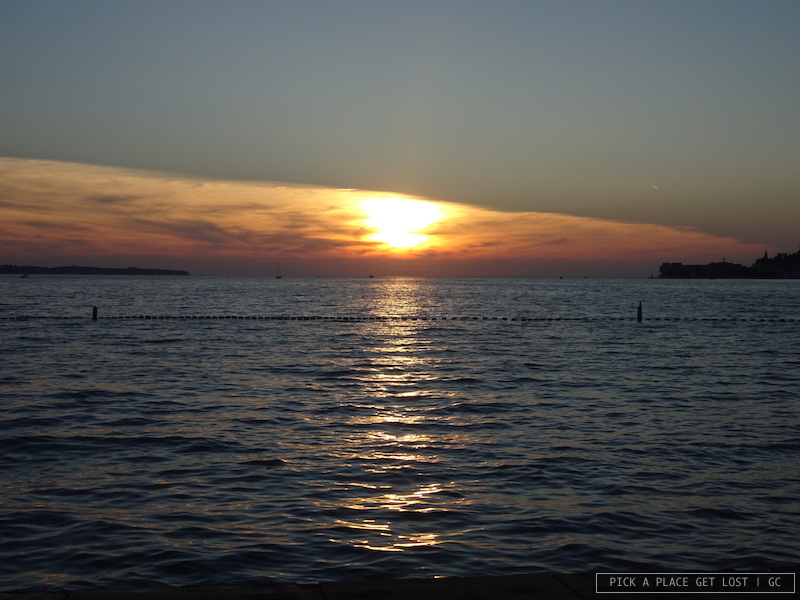 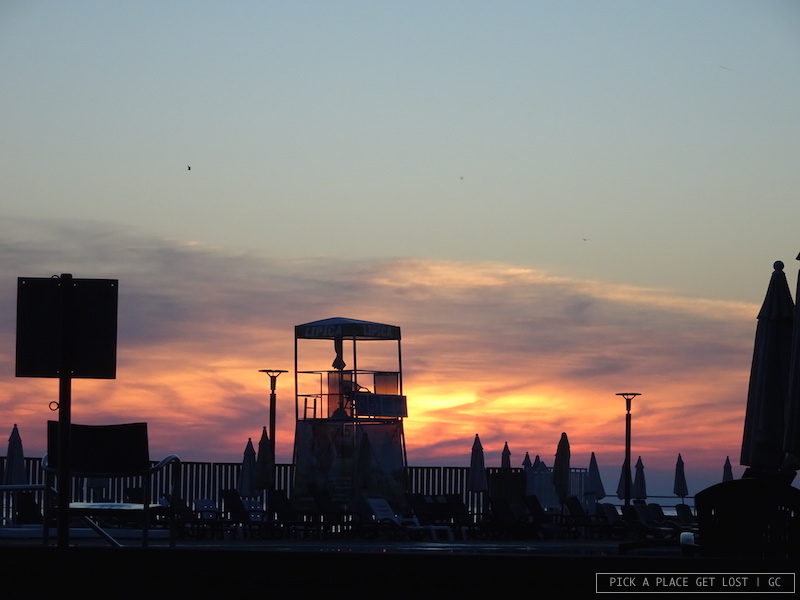 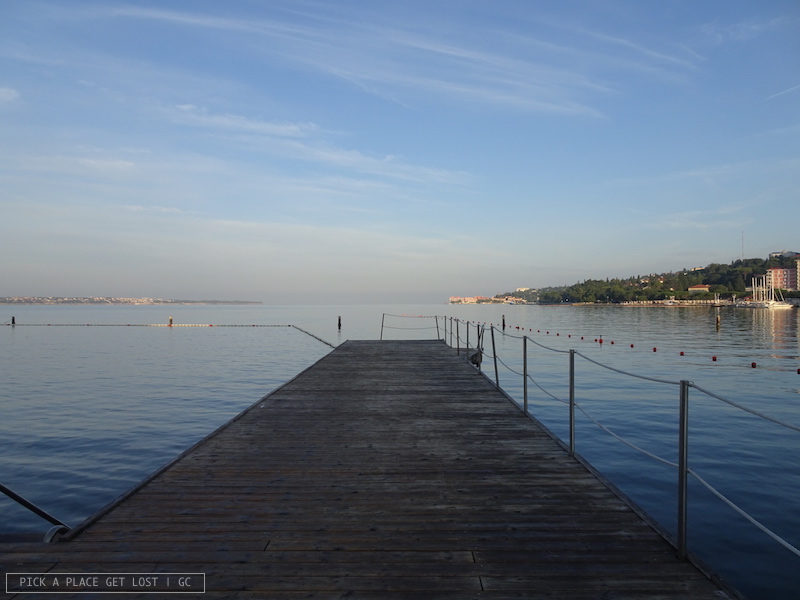 If I was teleported to Portorož, and I wasn’t given any details about my surroundings, I could easily guess that I’ve ended up in some seaside resort on the Italian coast.

By that I certainly do not mean that Portorož feels less ‘special’, more ordinary than Piran. I’m just surprised at how, despite being literally adjacent to each other, the two towns could not be more different from one another.

I’m not too familiar with Portorož because, aside from the waterfront, I did not have time to explore it further. If I could, though, I would choose to visit two places in particular: Forma Viva and the Salina Nature Park.

Forma Viva is a sculpture garden which also offers stunning views over the bays of Piran and Portorož.

The Sečovlje Salina Nature Park is a huge nature reserve just outside Portorož. The area has been devoted to salt-making for centuries, and it’s super rich in wildlife. We caught a glimpse of the salt pans once when, as we left our B&B, we picked the wrong direction, and drove past the area. It looked so amazing! I would love to visit the site. 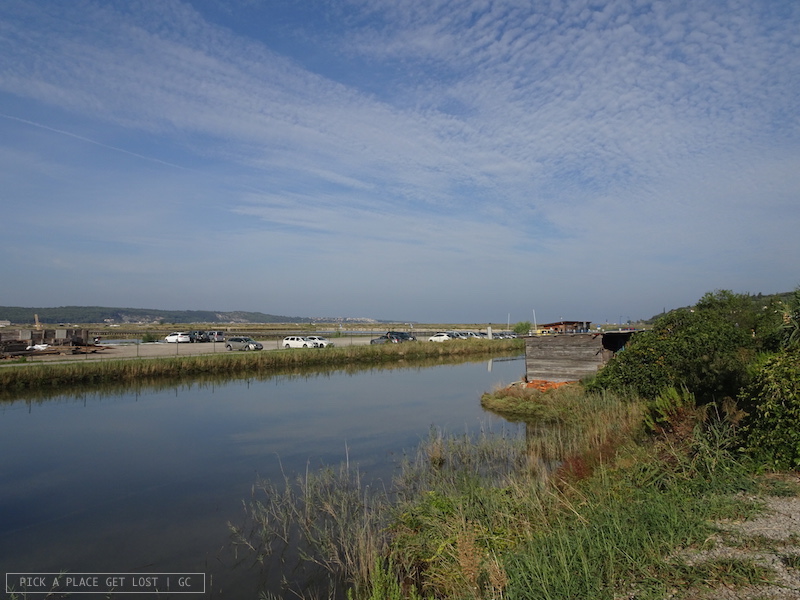 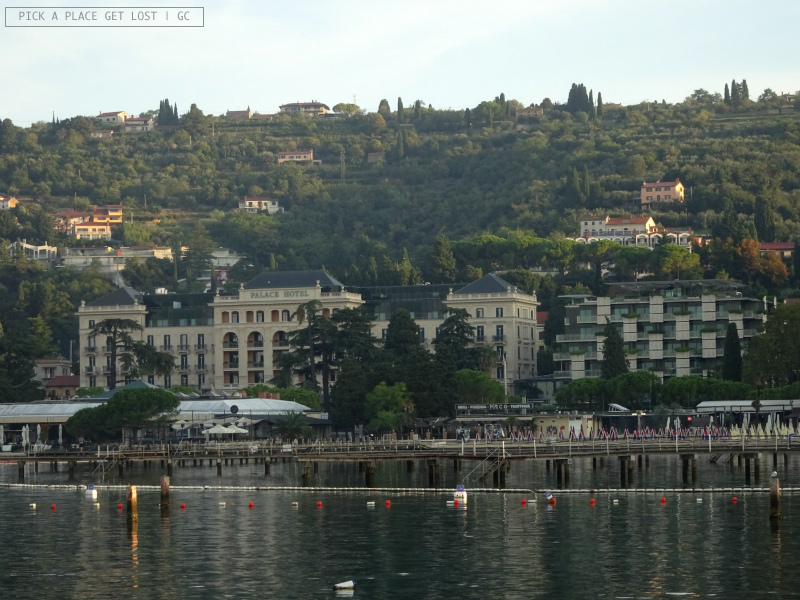 Technically Piran and Portorož were the final stops of our road trip around Slovenia. From the coast we then drove back to Ljubljana (with a few intermediate stops). We returned our car, and soon enough were on our way back to Brno.

However, there are a few places I’ve barely talked about, which deserve to be at least mentioned more properly. After all, I still have one Slovenia-themed post left to publish! 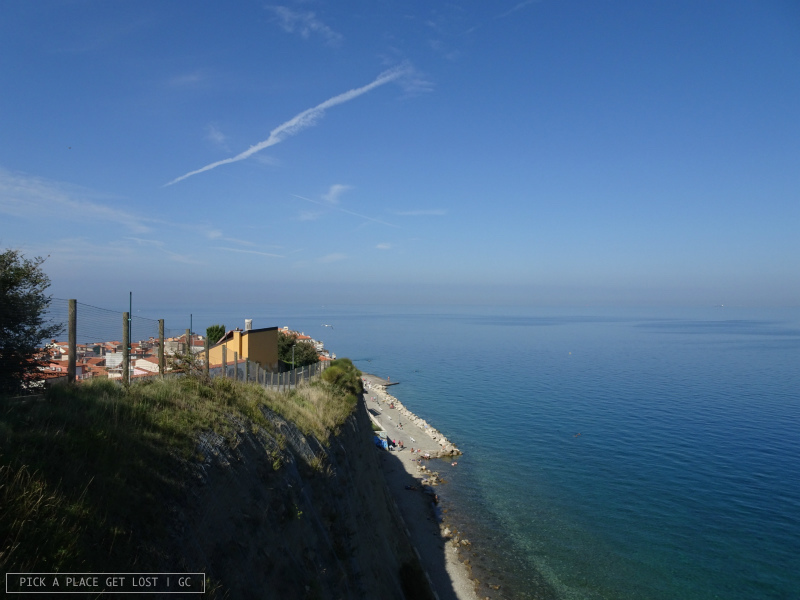