It’s easier to write about something when you have mixed feelings about it. You can use the most diverse, extended vocabulary, thus conveying how you really feel about it, be the ‘it’ in question a place, an experience or a travel destination.

The downside of writing about something you utterly and completely loved (no ifs, no buts) is that you might end up using and abusing the same two or three adjectives to describe it (e.g. amazing, breathtaking, marvelous, magnificent, and the like) or, even worse, end up sounding so repetitive that your words lose their original, poignant meaning.

I will, however, try and not abuse the most conventional adjectives I could easily resort to when describing places and views. I will probably fail, at times, but I will try. So, let’s start. 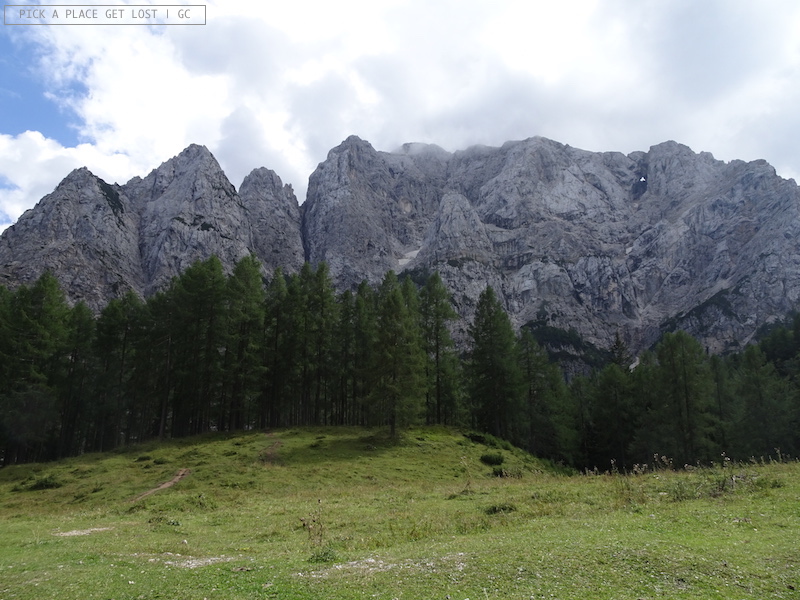 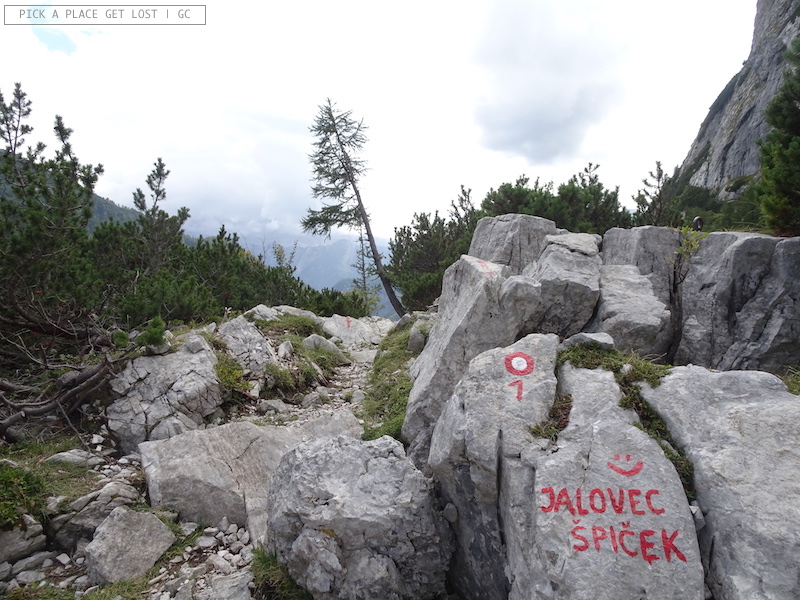 So where were we? Ah yes, we had just left Vintgar Gorge, and we were headed to the mountains. The plan was to drive straight to Kranjska Gora and, from there, drive through the Julian Alps, all the way to Bovec, in the Soča Valley.

That said, let me clarify that: 1) Of course there were intermediate stops along the way throughout the day, and 2) The first stop, in fact, occurred a good 25 minutes after we’d driven out of Vintgar.

While other stops we already expected we would make, this one was 100% unplanned but equally necessary. 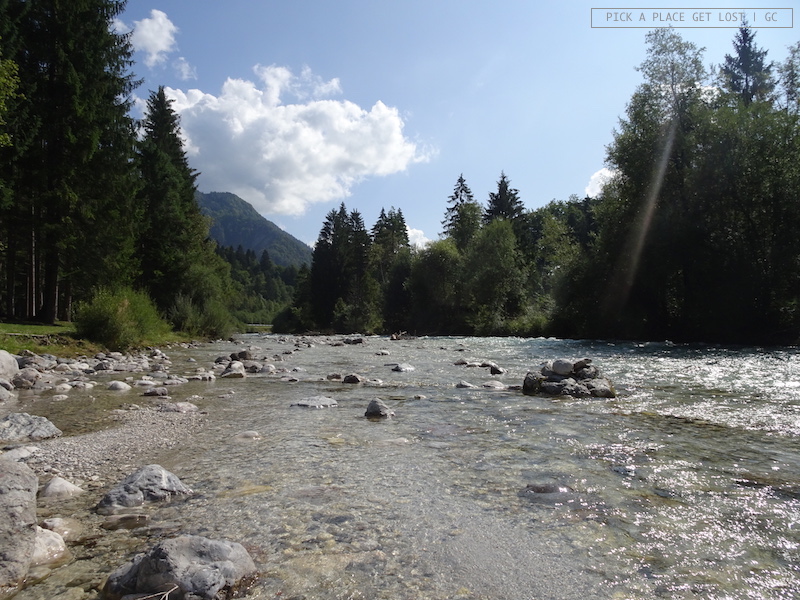 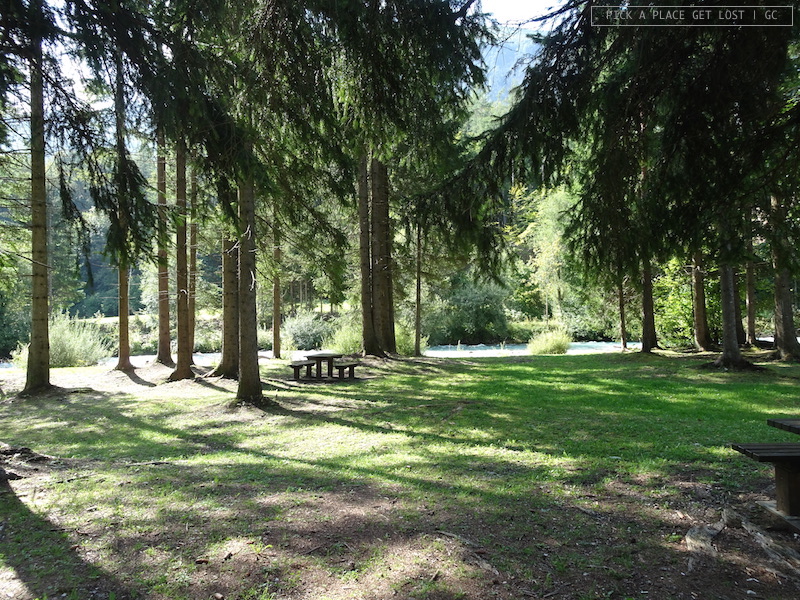 We found ourselves driving past a green area overlooking a river. With the sun out and the clear sky, the view looked like out of a postcard. ‘Stop stop stop!’, I yelled, as Bobby braked sharply (at that time she was at the wheel). As Google kindly told us, we were in Mojstrana, a village mostly known as starting point for hiking routes in the Alps and the Karavanke mountains, and for being the site of a WWII mass grave. We only had a brief stop by the river, so I can’t say much about Mojstrana itself, but the scenery really made it worth the stop.

Official stop no. 1 on our agenda was Kranjska Gora, which we drove to straight after the Mojstrana stop. With its 1,500 inhabitants, Kranjska Gora is one of the most popular alpine resorts in the country. That’s why they say winter is the best season to visit: the small town is at its best when it’s coated in snow, and one can make the most of its countless ski slopes.

I would certainly love to go back in winter and ski in the area. I have to say, though: oh how pretty it is, regardless of the season. In fact, it’s also ideal for practising all sorts of mountain sports all year round.

What’s more, the town exudes a relaxed, laid back atmosphere. The main street is dotted with souvenir shops and characteristic restaurants, which reveal a lot about the key role tourism plays in the area. 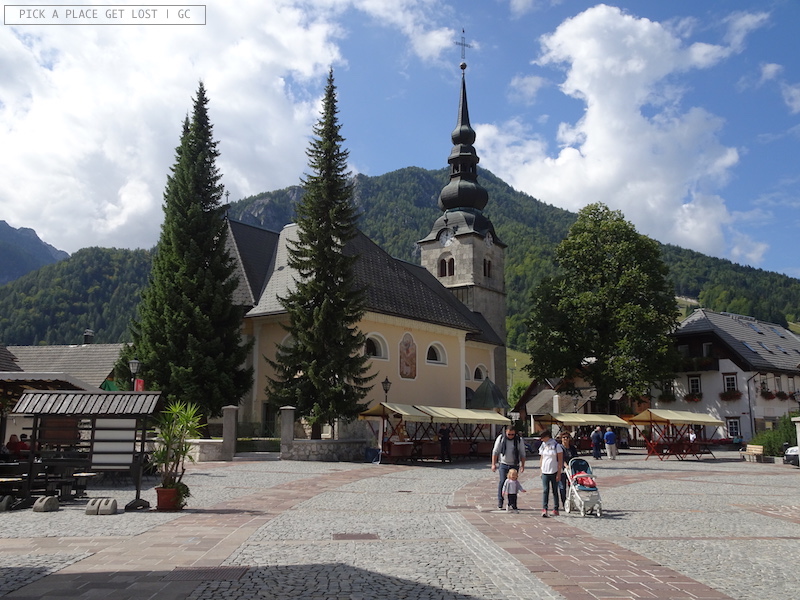 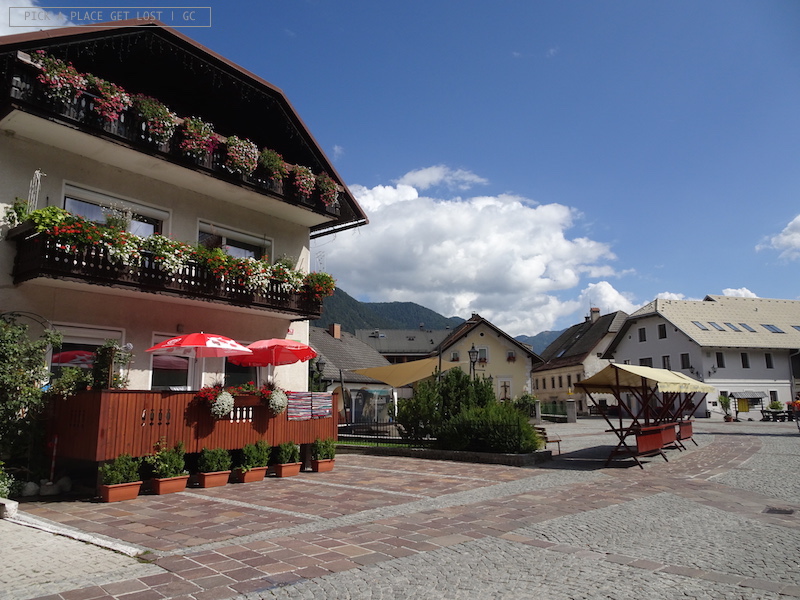 To us, though, Kranjska Gora was only a drive-through stop. We had to get there in order to drive back into Triglav National Park and through the Julian Alps via a very special road.

Yes, because the road that connects Kranjska Gora with Bovec is a 50-km alpine road known as Ruska cesta (Russian road). It was largely built by Russian prisoners of war during WWI by order of Germany and Austria-Hungary, which at the time were busy fighting against Italy. The drive also takes you through Vršič Pass, which, at 1,611 metres above sea level, is the highest pass in the Eastern Julian Alps.

The road is open between May and October. When it’s closed, you will be able to travel to Bovec from Kranjska Gora via Tarvisio (in Italy) and the Predel mountain pass. 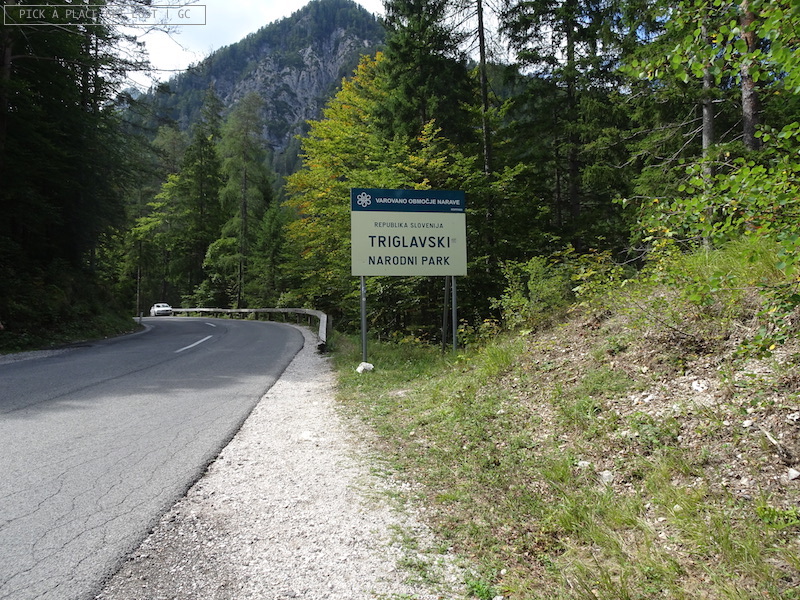 The Ruska cesta, though, makes for a memorable drive, one you will remember for at least 50 reasons – and, no, I’m not just picking a random number. The road consists of 50 hairpin turns, all of which are duly marked by their respective numbered signs.

A number of intermediate stops along the way is, again, inevitable and necessary. One of them is the Russian Chapel (Ruska kapelica), a small, wooden church just off the main road not far from Kranjska Gora. The chapel was built on the site where, in 1916, over 300 Russian prisoners of war were buried in an avalanche.

There’s a small parking area near the church. In fact, you can easily glimpse the chapel from there. The church site also offers great views over the mountain range. 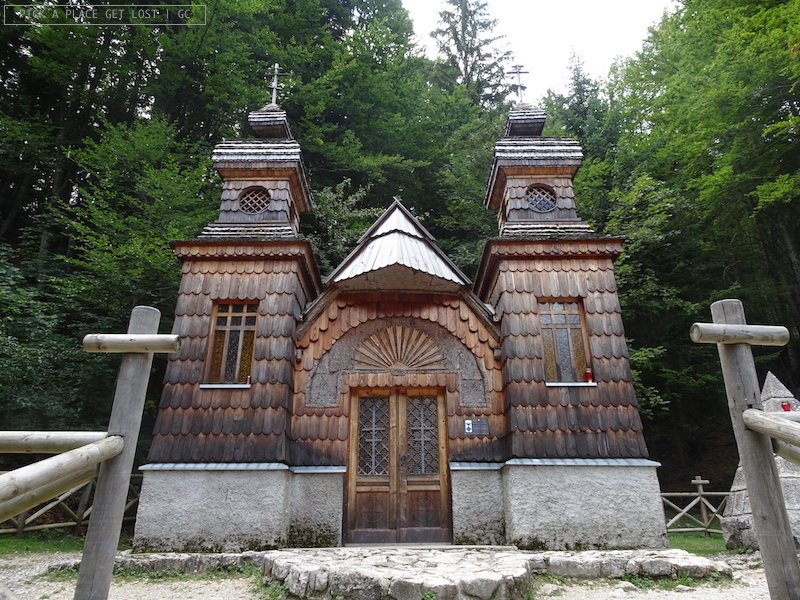 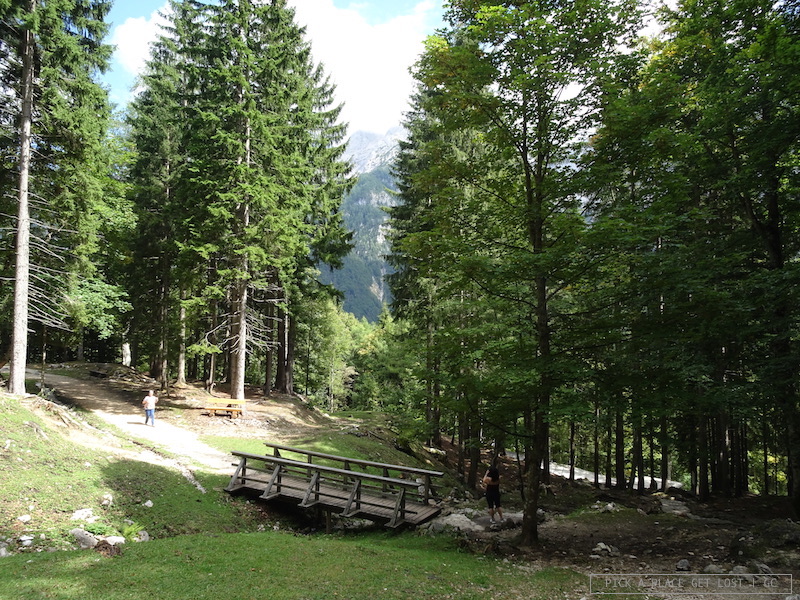 I will skip the next one or two stops we made along the way. We just stopped at the edge of the road in random, nondescript spots where the mountains looked too spectacular to be real. We had to take a closer look to realise that, yes, they were real. Few things are as humbling and belittling as mountain sceneries. How can you not respect and protect nature when you’re confronted with such beauty? I will never understand.

We kept driving on till we came to a clearing with a fairly large parking area and a couple of wooden huts. Okay, you want and have to stop there. You’re in the heart of the Vršič Pass there, in the very heart of the Julian Alps.

Get out of the car, go have a look around. You will be surrounded by mountains on all sides: it doesn’t get more belittling, yet majestic than that.

I was genuinely mesmerised. The mountains felt so close. 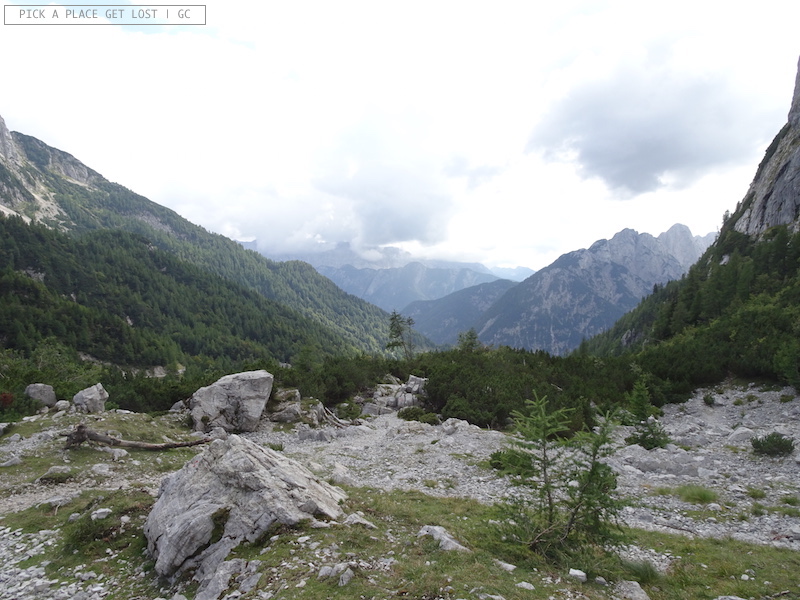 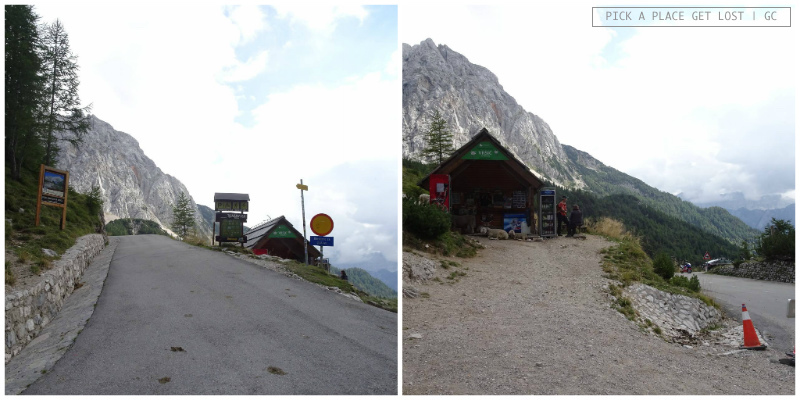 That spot is also the starting point of a number of hiking routes. Plus, there are sheep all over the place! Seriously, keep an eye out, or you might run over one or more of them: they tend to just stroll across the parking area without a care in the world.

(On a side note: they’re so soft! Yes, they would let us stroke them!)

When you leave the area to drive on, the road resumes its windy course. That’s also where it starts going downhill.

The drive is no less scenic, though: the road enters Soča Valley, and it runs parallel to Soča river all the way to Bovec and beyond.

Here and there along the way you will notice small parking areas on the edge of the road, where you can leave your car, and:
– cross a narrow bridge over the river, and enjoy the most spectacular views of the valley
– practise some rafting, canoeing, or whichever other water sport you’re there to practise in the first place. 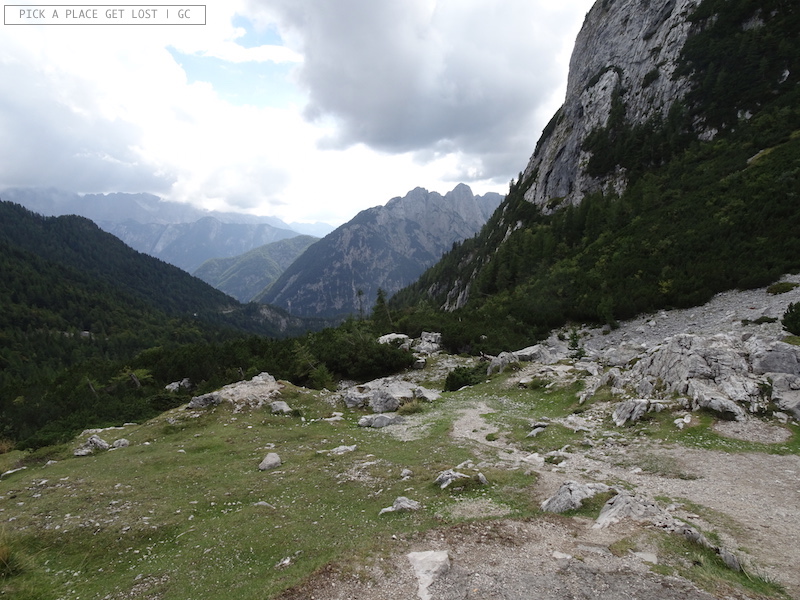 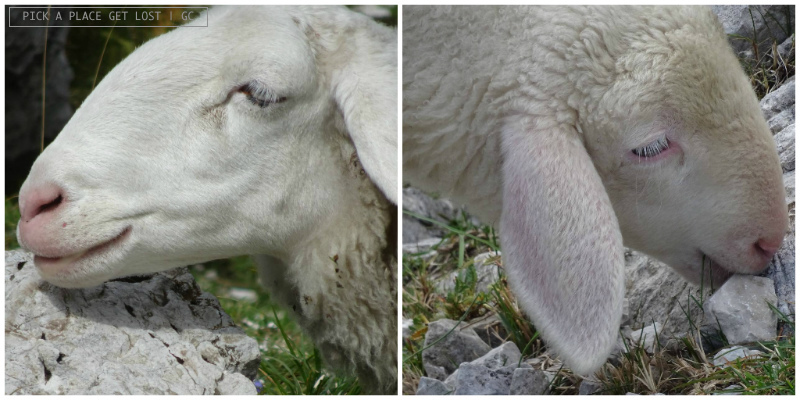 Waterfall no. 1 is Boka Waterfall. If you arrive from Kranjska Gora, you have to drive past Bovec to get there. It’s a bit further down road 203. Follow the signs toward Kobarid, and you will get there.

Hotel Boka marks the starting point of the trail to the waterfall – well, to the viewing spot (the waterfall itself is much farther than that). You can park just by the hotel, and follow the signs to the path, which goes through the woods and really is a bit steep. Once you reach the viewing spot, rest assured that, if the ascent hasn’t taken your breath away, the view will. 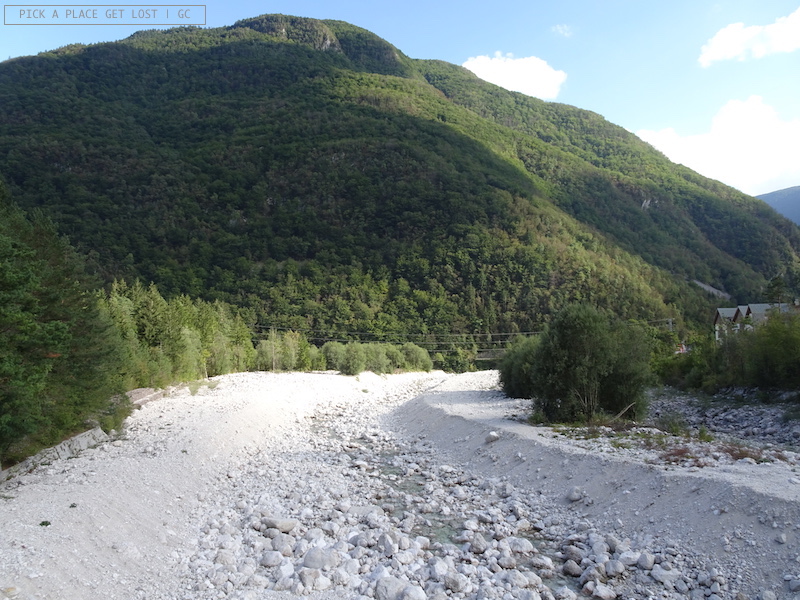 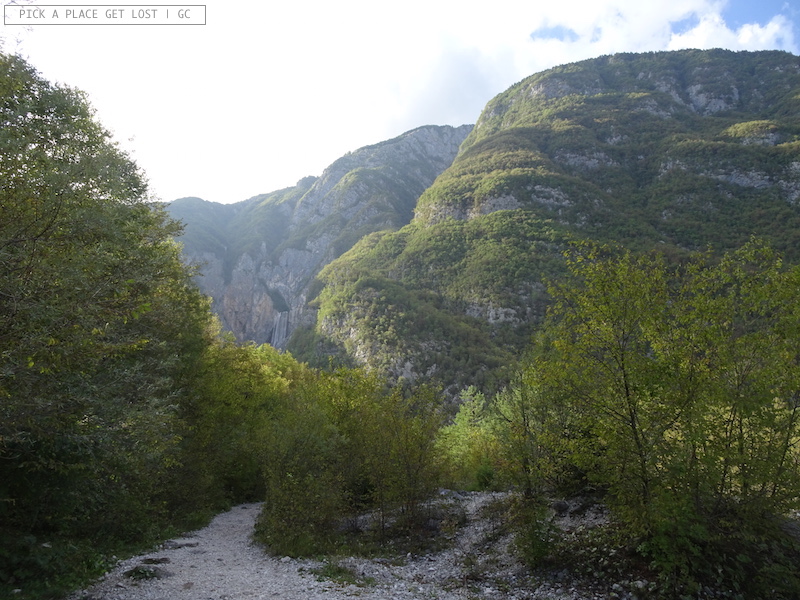 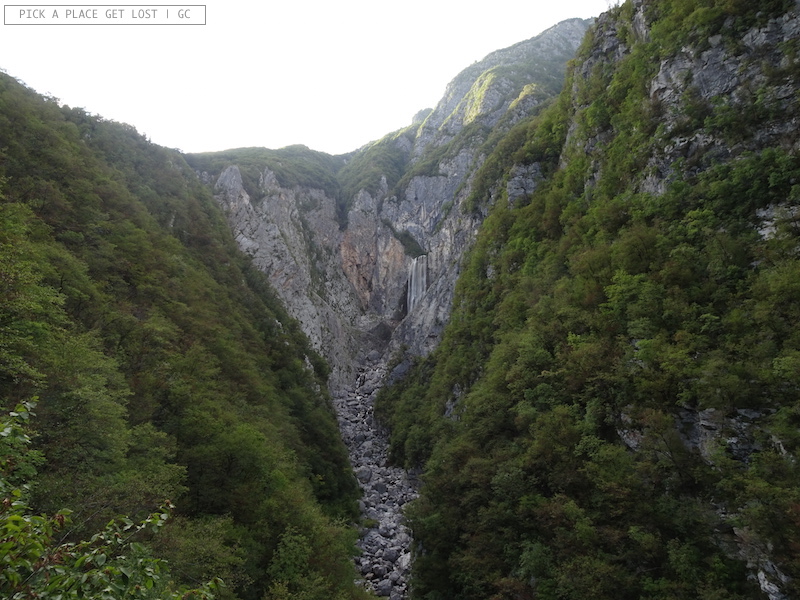 The mountain scenery is objectively awe-inspiring. When we were there, the late-afternoon light added to the already unique view by casting a warm, golden shade on all things around.

As for the waterfall itself, at first sight it might look… very small! Yes, but it’s only because it flows straight out of the mountains, which are simply gigantic in comparison. Boka Waterfall, in fact, is the highest waterfall in Slovenia.

Its source is a karst spring located at 725 mt above sea level. The waterfall consists of two drops: the first is 106 mt high, the second is 30 mt high. As the explanatory sign reads, what makes Boka unique (aside from its height) is ’that the water falls over the edge almost immediately after rising from the karst underground’.

As for waterfall no. 2, it’s Kozjak Waterfall, but let me take this to the next post, or this one will really be without end. 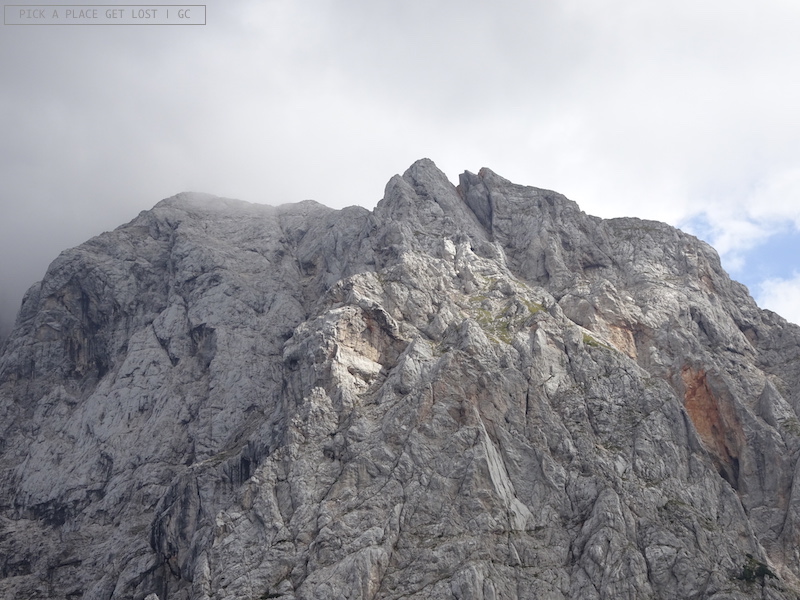