It’s around 15.30 on a cold, early January afternoon when the night train from Moscow enters Saint Petersburg main station.

I am feeling quite hot, and not in a good way. Partly it’s because of the quite high temperature I had yesterday (when I lay virtually motionless in my Moscow hostel bed all day, how memorable). Partly it’s because it was boiling hot on the train. Give me some fresh air. 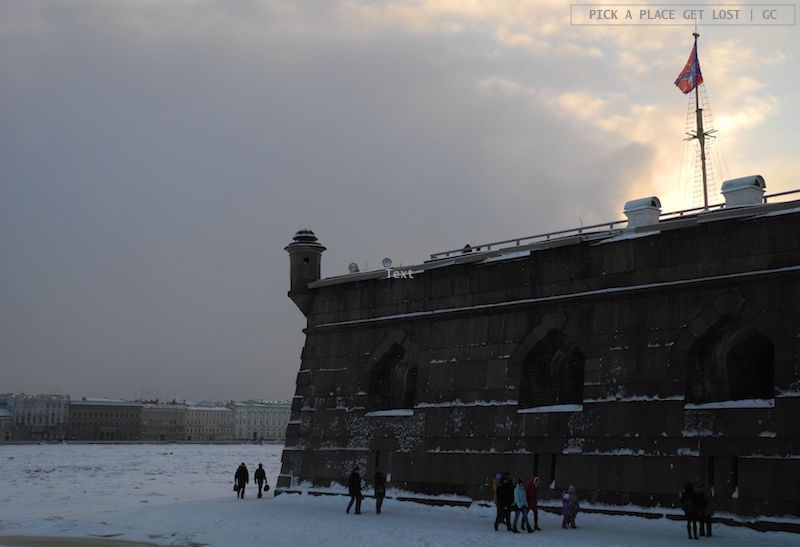 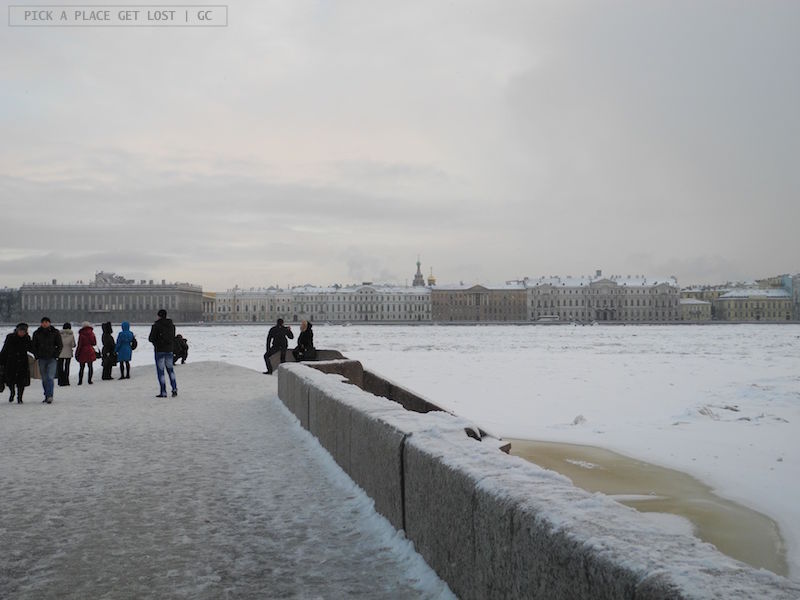 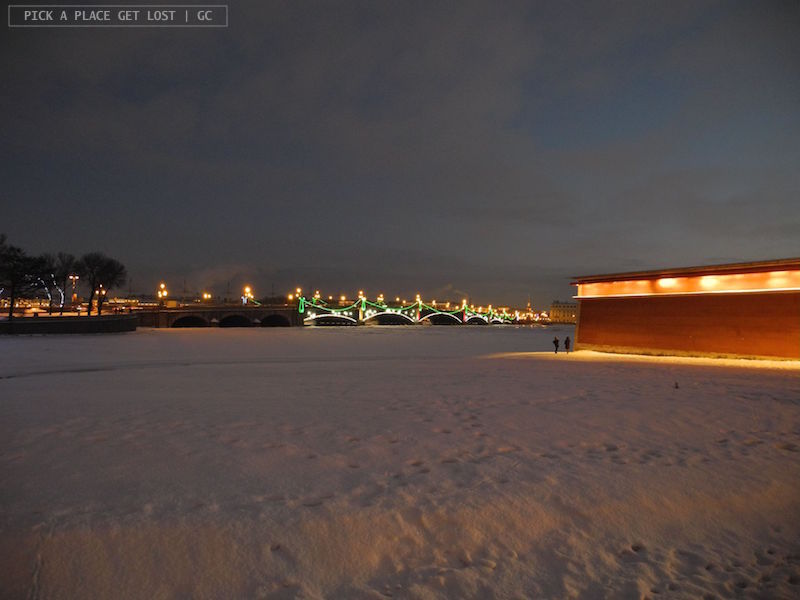 Two things strike me instantly as I exit the station. One is the street, which makes you think of Europe. I might be wrong, but as I look at the streets, the buildings, the shops…  Everything almost exudes a European vibe.

The other thing that strikes me is the quality of the air. It’s nothing in Moscow here. It’s chilly, it almost has a northerly feel to it, which tickles your cheeks as you stand at the traffic lights, waiting for the green.

(Spoiler: I’m writing this bit the very day I arrived in Piter, as Saint Petersburg is also known. Yet this feeling will stay with me the whole time. Blame it on the translucent sky and the perfection of the shape of snowflakes.) 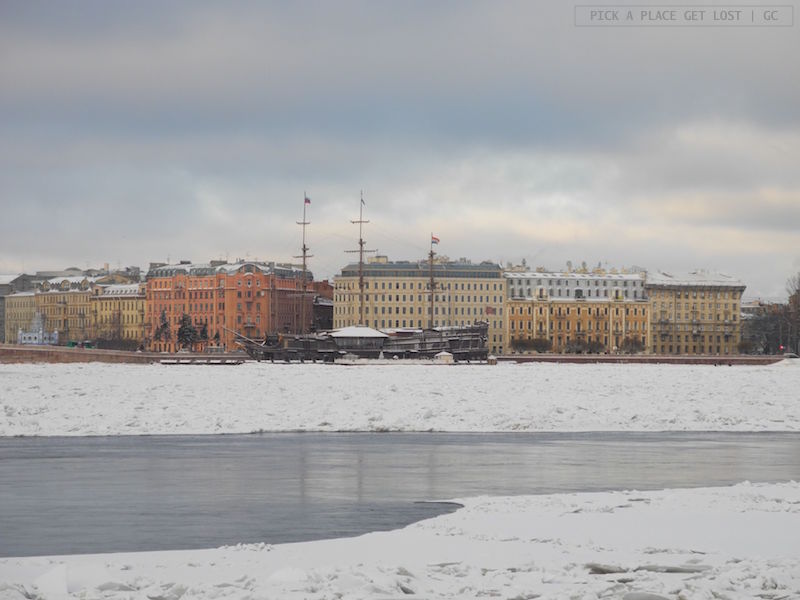 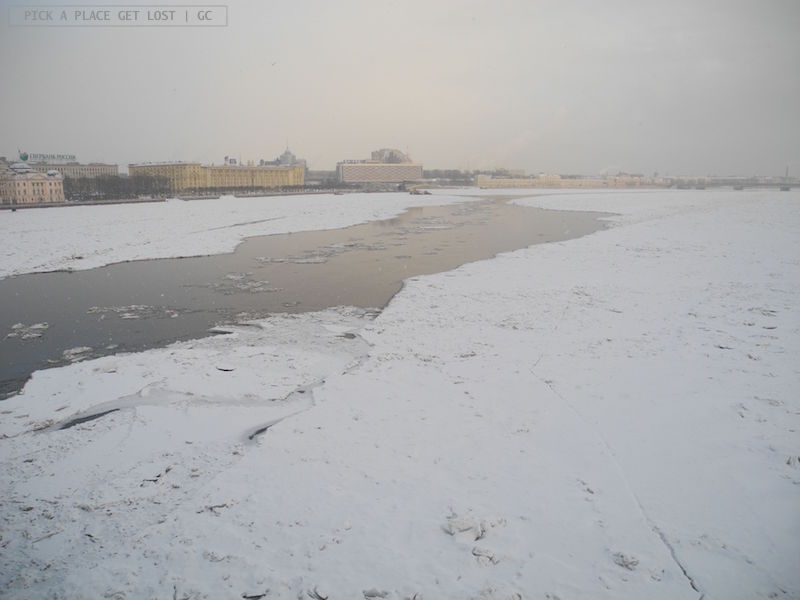 But there’s also something else. I can’t believe it when it dawns on me, yet I can’t un-notice it once it’s there: it’s so silent everywhere. After spending the last week in noisy, crowded, Christmassy Moscow, here it feels like things and people are moving and talking as if in a whisper. Not even cars make that much noise as they drive past.

On this first day I get to see very little of the city, i.e. the way from the station to the hostel. So I’m not sure what to think just yet. Some say appearances are deceiving, to which others would reply that first impressions are bound to last. I’m not sure who to trust just yet.

24 hours later the feeling is still as good. I mean, today I was almost run over at a junction on the way back to the hostel, but apart from that the city is beautiful.

Nevsky Prospekt (Невский проспект), Saint Petersburg high street, is broad and endless and stunning. As you step onto it, especially if you’re coming from one of its many side streets, it shows off in all its imposing, magnificent beauty – like a queen parading before the crowd on a day of public celebration, all covered in stoat and jewels of priceless value.

Its pavements are half covered in snow (which obviously stands for the stoat), and Christmas lights are nearly as bright and omnipresent as Christmas trees outside shops and cathedrals on both sides of the avenue. 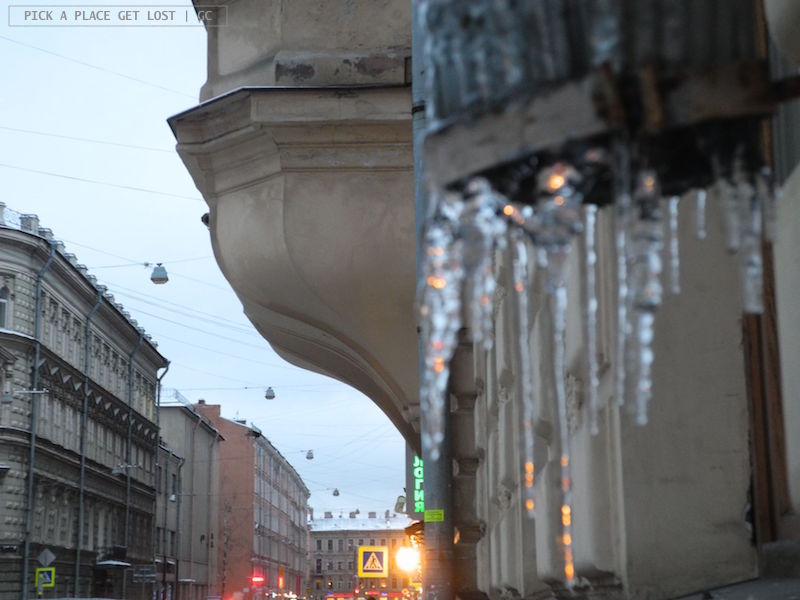 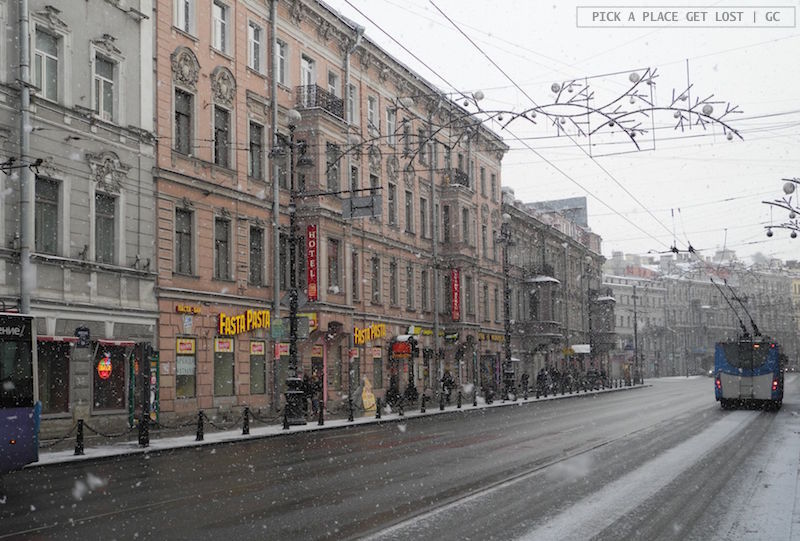 Many of its side streets have canals flowing in the middle – well not this time of the year, but technically there is flowing water in the middle. The brightest star, though, is the river Neva (Нева), so broad it almost looks borderless. Majestic, colourful buildings are lined up on the horizon, there are bridges at every corner, and the river itself resembles a soft blanket.

Then you look up, and you see the sky. And once you do, you can’t help throwing random glances upwards every now and then as you walk the street.

The clouds are dense and thick, yet suddenly they part to reveal a patch of clear blue. It only lasts a few seconds, yet it’s enough for the air to change colour, for the buildings to grow brighter, even for the now-greyish snow to grow whiter.

Then more clouds cover up the ‘hole’ and the sky is all overcast. Until the next gush of wind blows them apart again.

I realise I could simply have said that ‘I LOVE the sky in St Petersburg’, but I’m not that good at getting straight to the point. 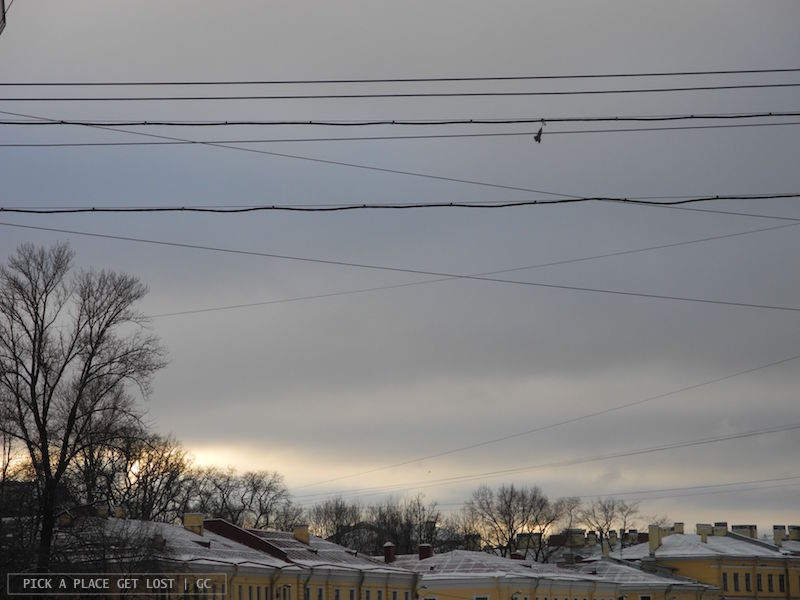 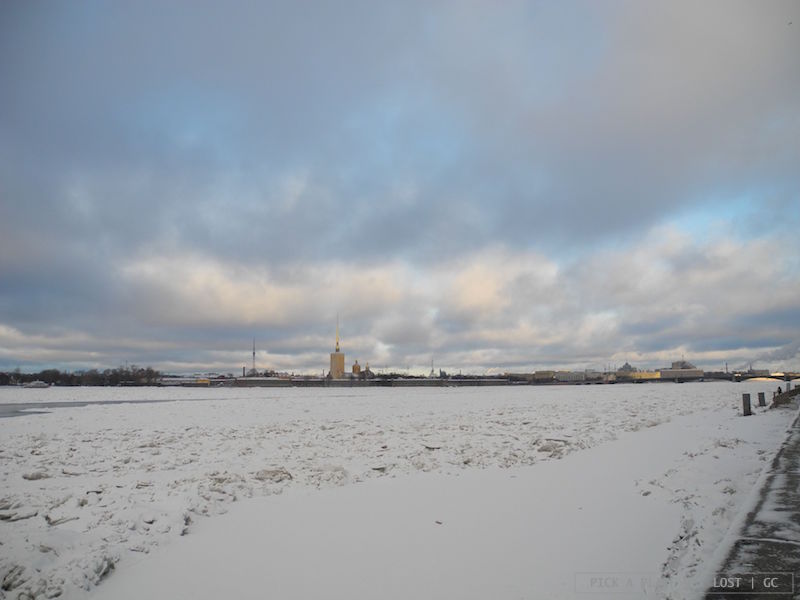 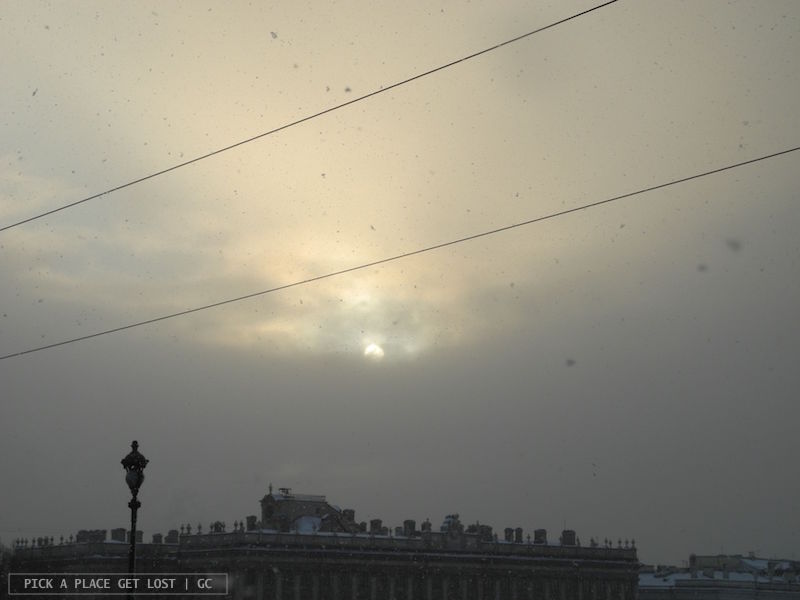 And let’s talk about snow. Today it started snowing hard at some point, and it fell in such huge snowflakes as I have never seen anywhere before. My Russian teacher from Moscow was right when she said that there are two types of snowflakes: the ‘ordinary’ crystal-shaped ones, and the ‘multiple’ ones, which consist of a whole bunch of individual snowflakes bundled together. They even have two different names in Russian, respectively snezhniki (снежники) and khlop’i (хлопьи). 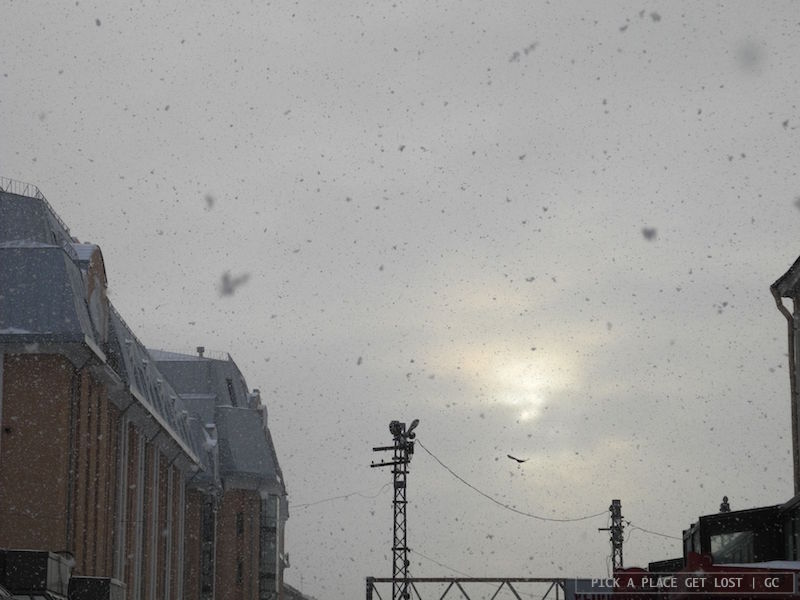 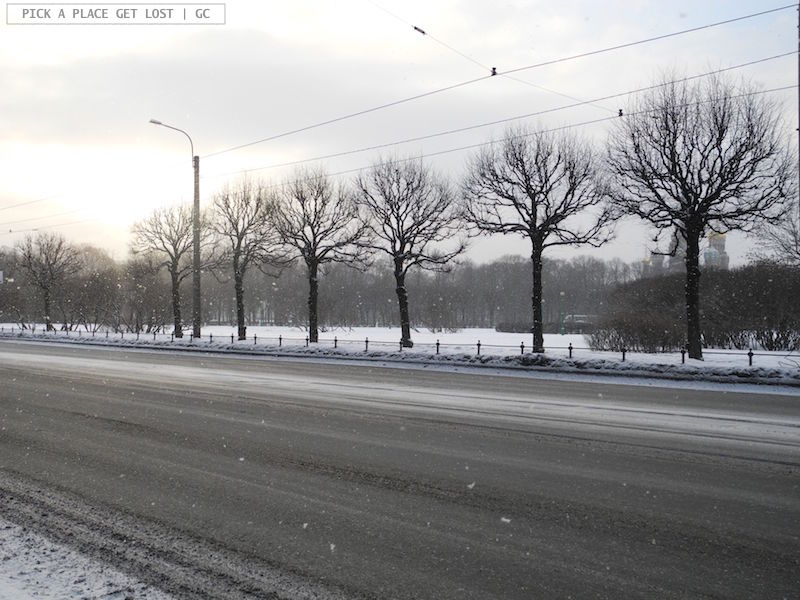 Okay, today was the last day in Piter. It was also they day I visited the Hermitage. Regardless of how many times you put it off till the next day, the time comes when you have to go: it forms an integral part of the Saint Petersburg experience.

The first floor is all marbles and sarcophagi and, more in general, ancient art from different parts of the world (of which, to be 100% honest, I accidentally skipped a few random sections).

The second floor is highly demanding, as one can tell from the map. It undermines your physical strength and, when you realise you’ve made it to the end, all you need is food (and, if you’re a smoker, a cigarette). After a reasonable intake of food and caffeine, you can move on to the third floor, where the 20th century collection is on display. 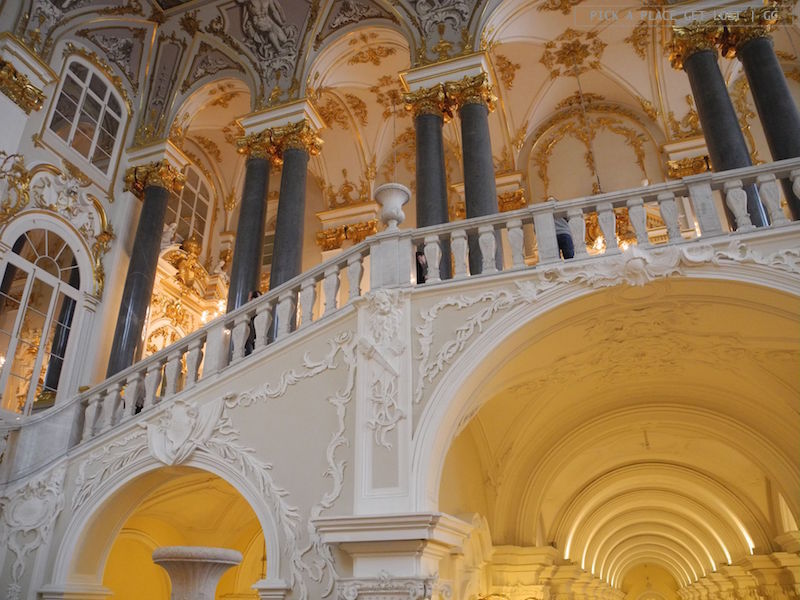 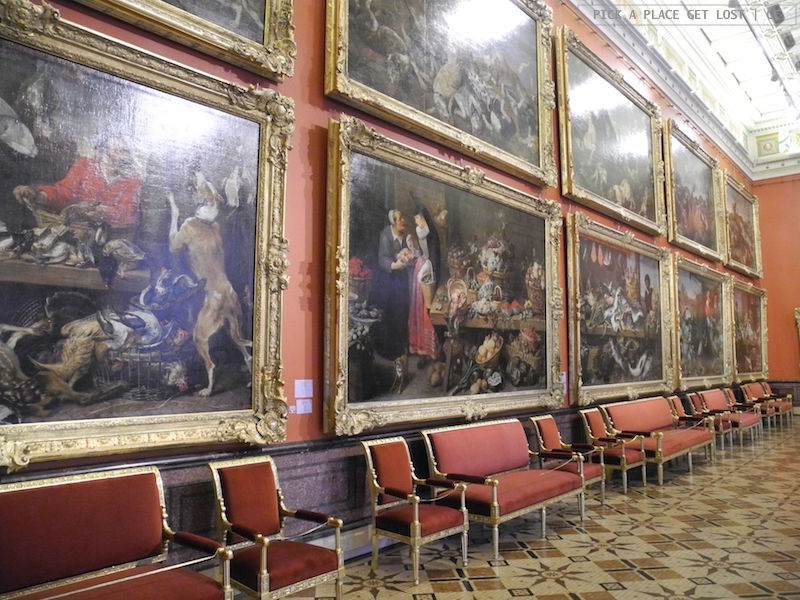 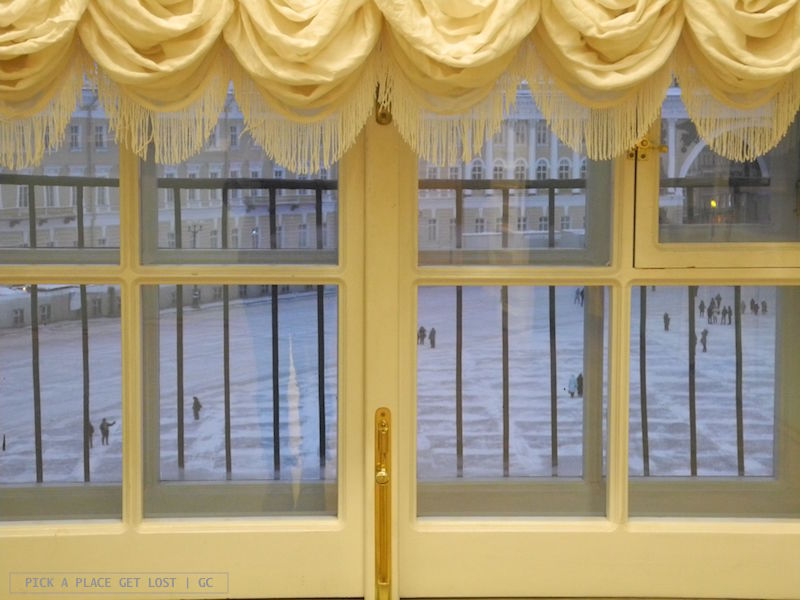 Leaving at closing time was one of my favourite parts. As you head back to the ground floor to pick up your coat, you can’t help noticing how silent and still everywhere the corridors are. Then you go out, and the sudden cold feels good on your face after you spent long hours standing still in front of the artworks.

As you will imagine, in the five days we spent in Piter we saw and visited quite a few other museums and places of interest, aside from the Hermitage. And I could have told you all about them. 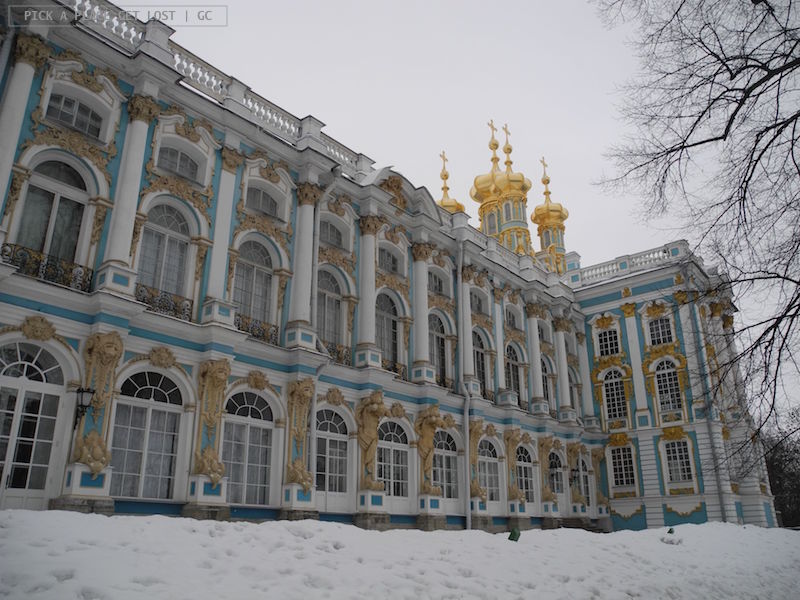 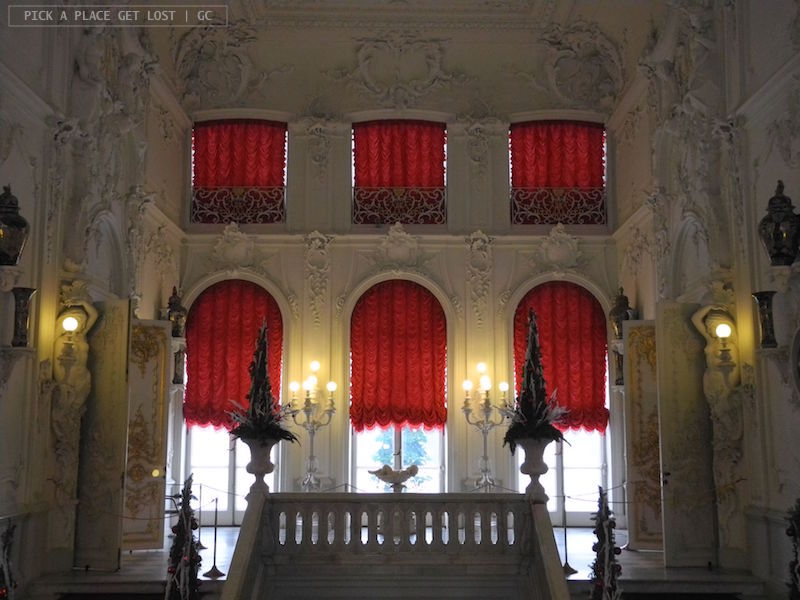 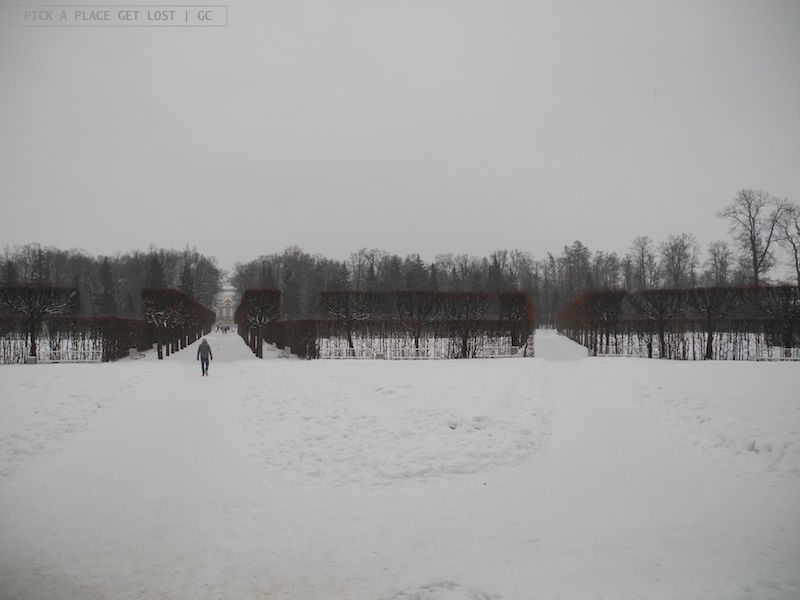 I could have told you about the Peter and Paul Fortress, the original citadel founded by Peter the Great in 1703, and now (also) home to the State Museum of Saint Petersburg History.

Or maybe about Tsarskoye Selo (Царское село), a town 25 km south of Piter where a former imperial residence is located.

Or even about its churches: Kazan Cathedral, St. Isaac’s Cathedral, and the Church of the Saviour on the Spilled Blood (Храм Спаса на Крови), the most iconic of all, thanks to its multi-colour onion domes and its richly decorated mosaic interiors.

I could have told you all about that, but I chose not to. Facts and figures you can easily look up by yourself. What’s Google for, after all?

No, I chose to take you for a walk around the city as I saw it, i.e. by getting lost in it (at least a bit), and tell you all about the sky, the river, the snow, the buildings, and the winter light. Hope you don’t mind. 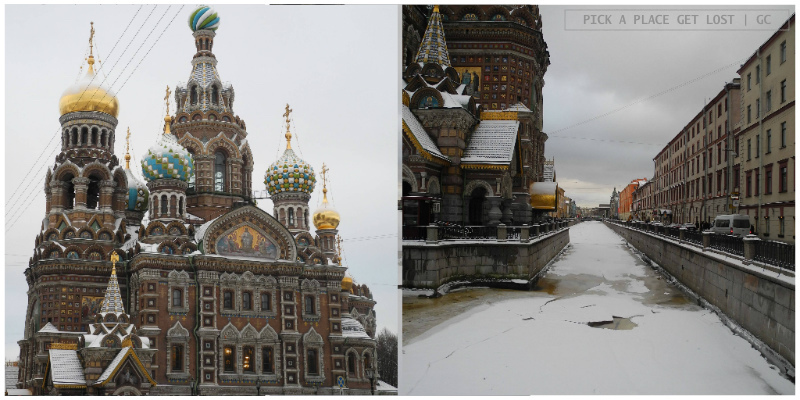 Church of the Saviour on the Spilled Blood 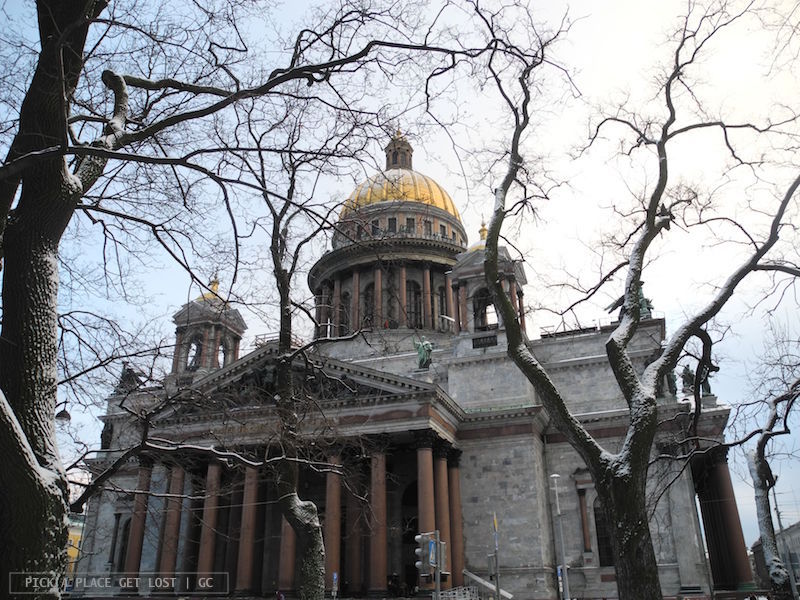 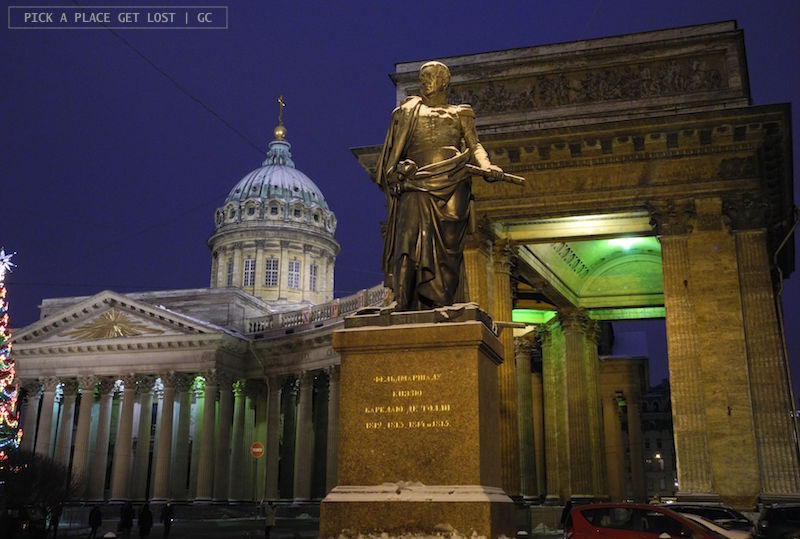 Now five whole days have gone: it’s time to leave Saint Petersburg. And, because we fail to book our train tickets early enough, there are no third-class seats left, so we have to travel fourth class.

Just as I write these very words the train is leaving the station. The floor is awfully dirty, and the windows are blurred by vapour and bits of ice. I can see the city disappearing in the distance, the urban landscape leaving room to dark, snowy countryside.

We’re going to spend the next three days around the Golden Ring (Золотое кольцо). Yaroslavl’ (Ярославль) comes first in line. 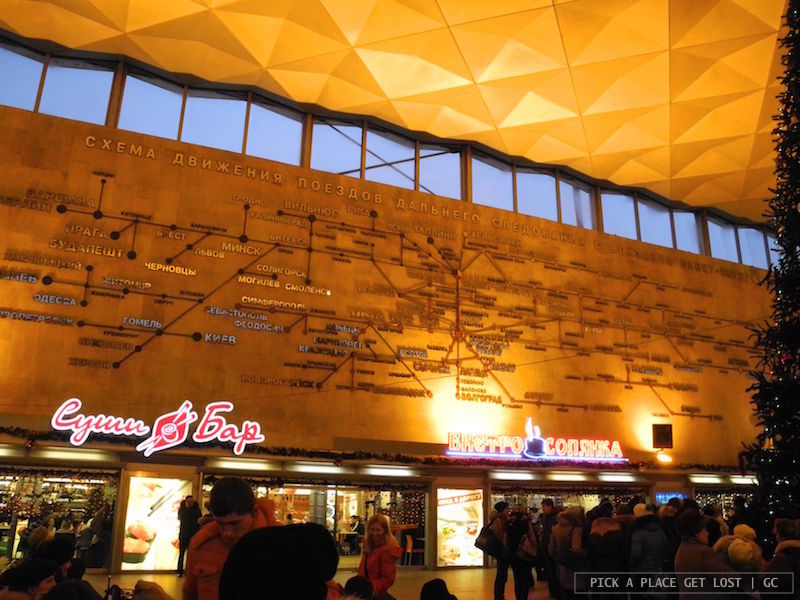