While in my previous Bodø posts I talked (more than extensively) about a number of key sites and sights in and around the city, there is one specific place I’ve only barely mentioned (if at all), which still did turn out to be quite an amazing surprise: Nyholms Skandse.

Say you’re at the harbour and you walk down Moloen till the very end of the pier (past Tony Cragg’s Utten Titel installation, remember?). Okay, right there in front of you, across the pier area, there’s a protruding rock at the end of an isthmus and, on top of a small hill, a round-shaped structure that resembles a fort. (Yes, that’s Nyholms Skandse). 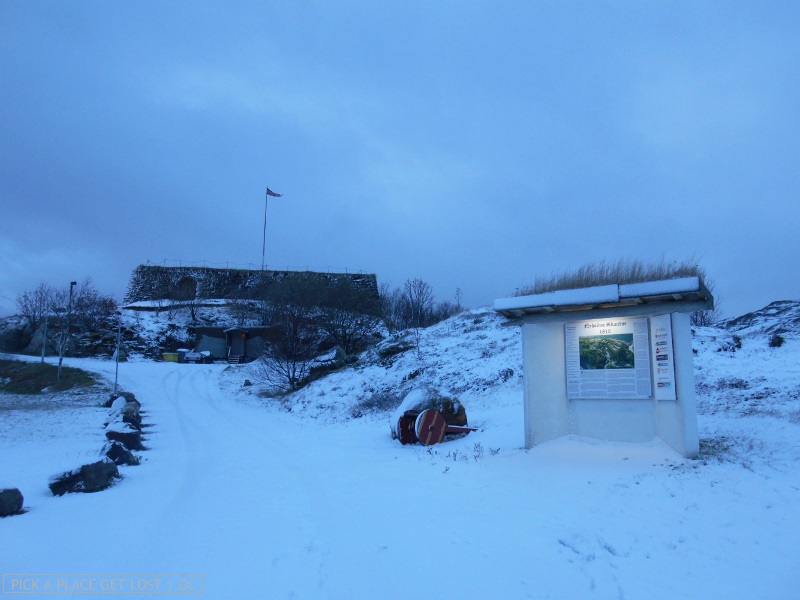 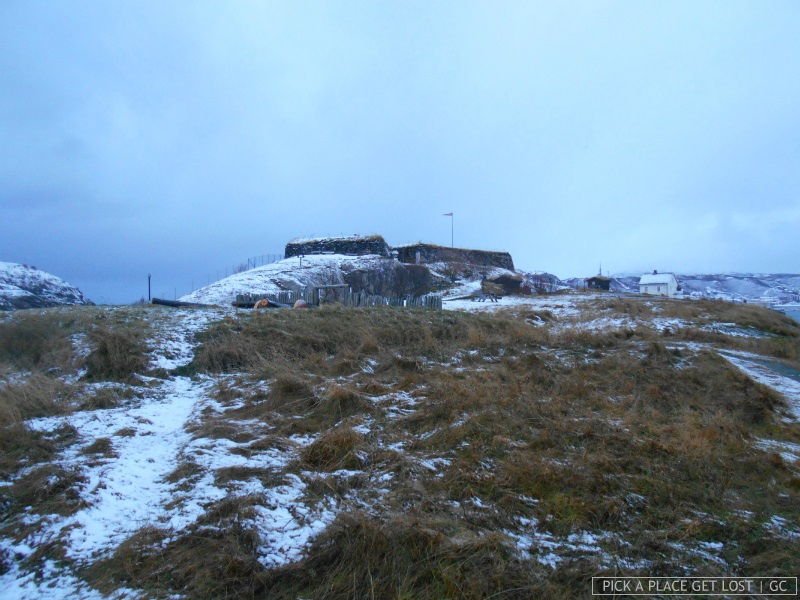 Right then and there it might not say much to you, when you see it. I also didn’t take special notice of it, overwhelmed as I was by the beauty of the harbour enveloped in pink clouds.

The next day, sitting on the bus back from Saltstraumen to Bodø, I checked out the map to see where I could go next, as I still had a couple of hours before it went dark. That tiny isthmus caught my eye again, so I resolved to head straight there as I got off the bus. So I did. 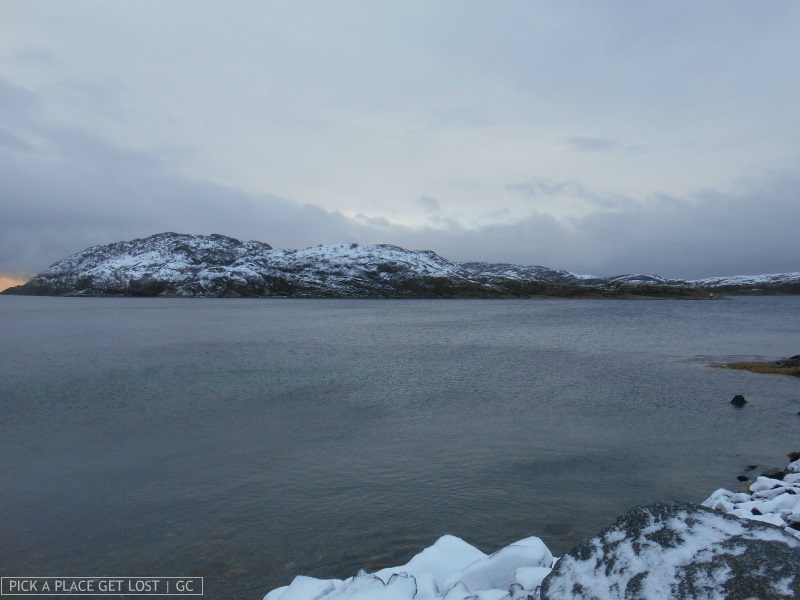 How to get there

Getting to Nyholms Skandse is the easiest thing. From the railway station (always one of the handiest starting points to give directions around Bodø) take the road called Jernbaneveien, and just keep going – you can easily keep to the pedestrian lane on the right-hand side of the road.

At first you will be walking past warehouses, a few shops, factories and blocks of flats. Gradually, though, you will find yourself crossing through the industrial area of the city. No fear, just keep an eye out and, when you get to the point where you can only turn right or left, choose left (the name of the street is Burøyveien). Again, just go down the main road – and pay attention, because not long after turning left the pedestrian lane will disappear. 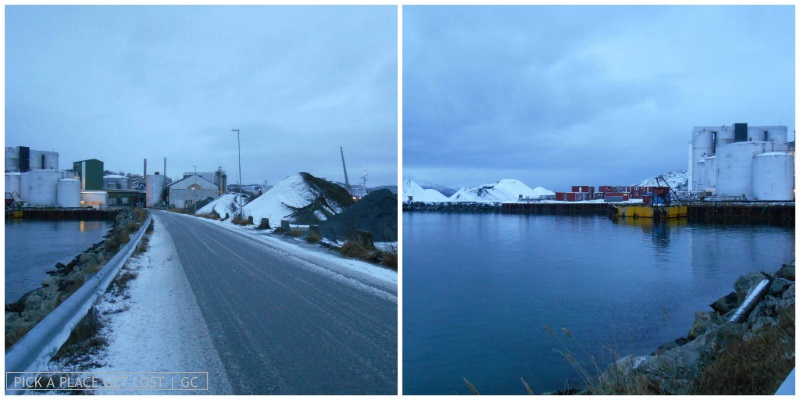 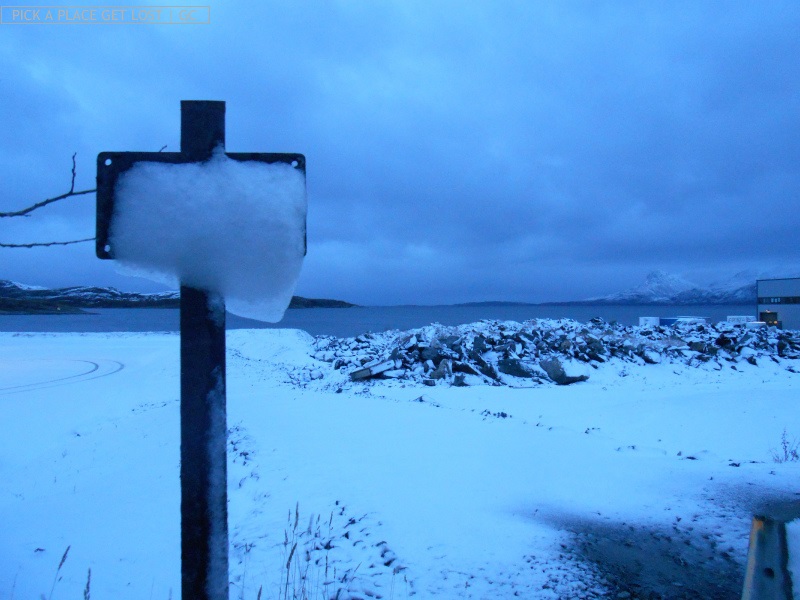 At first you might feel like you’re doing it wrong, like ‘what the hell, this can’t be right’. The road is lined up by factories, piles of coal and other raw materials, and trucks, either parked outside a factory or driving past.

I did have a weird feeling myself, at first, and was almost contemplating going back, when in the distance, oddly shaped by buildings and mountain slopes, I saw a patch of pink sky.

‘I want to go there’, I thought, and I didn’t go back after all. 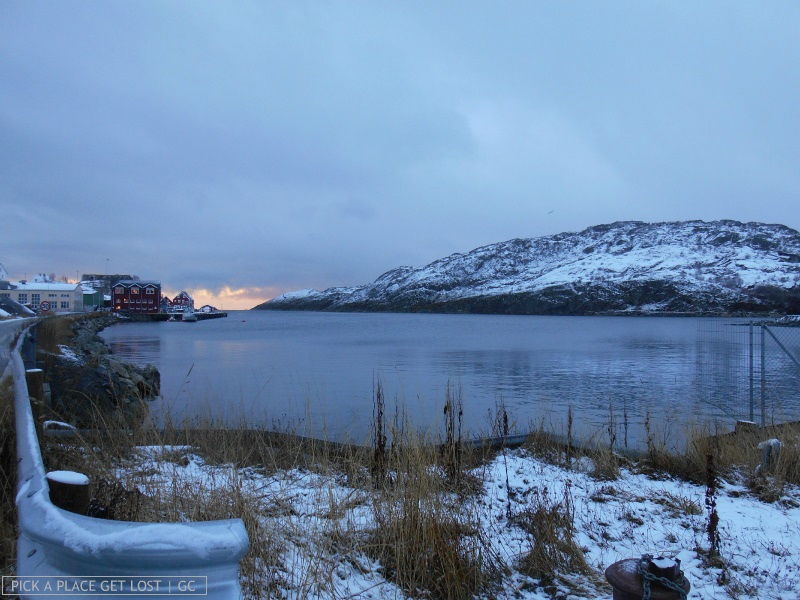 At some point the road forked, and it kind of looked like neither way was accessible: to the right there were a closed gate and a row of trucks parked outside a factory, while on the left there was… seemingly nothing but (more) piles of coal and a side street that looked like a dead end.

You want to go left. Just walk along the building and, right behind it, well, you will easily realise that you’ve got there. 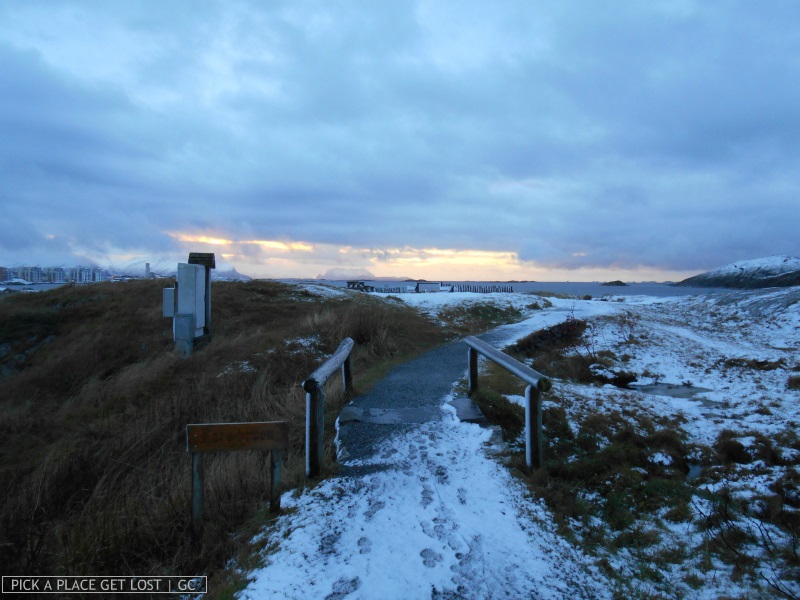 But what exactly is Nyholms Skandse?, you might wonder. Okay, good question. Nyholms Redoubt (‘Skandse’ in Norwegian) was erected in 1810, when Denmark/Norway was fighting with Napoleon against England. Due to the blockade imposed by England between 1807 and 1814, local people were 100% dependent on the grain supplies delivered from the White Sea (i.e. Russia). Over those few years around a hundred redoubts were erected in Norway to protect the storage of grain from the attacks carried out by English warships. Nyholms Skandse was one in two redoubts built in Northern Norway (the other one having been erected in Hammerfest).

The fort was shut down in 1835 and left to fall into ruin. Only around 2000 was the complex eventually renovated and acknowledged its historical importance in all its parts: the fort itself, the cannons, and the lighthouse behind  the building, overlooking the sea. 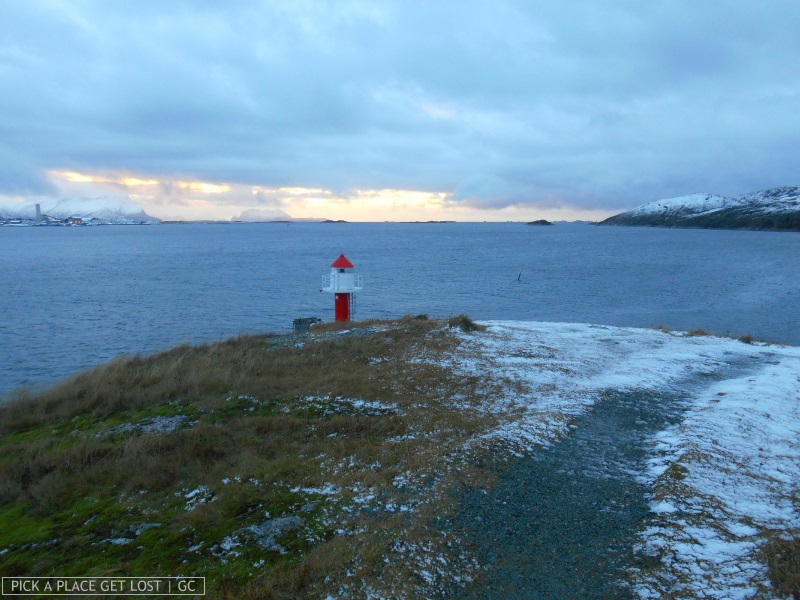 If I were to give instructions on how to tour the complex, I would probably give out three tips:

1. Step through the wooden gate of the fort and walk the few steps to the terrace on the top – that’s also where the cannons are, neatly displayed one next to the other.

2. Step back out through the gate, and walk along the wall of the fort to its very back. Then, stop and stare. That’s the viewing point you’re looking for, and it’s breathtaking, whatever the weather and/or time of day you choose to visit. The combination of elements I got was mesmerising: the thick layer of clouds, the sun filtering through right above the horizon line, and the snowy mountaintops.

3. Walk down the gravel path toward the lighthouse, feel the wind blow hard on your face and in your ears, and look at pretty Bodø to the left, and the dark sea all around. 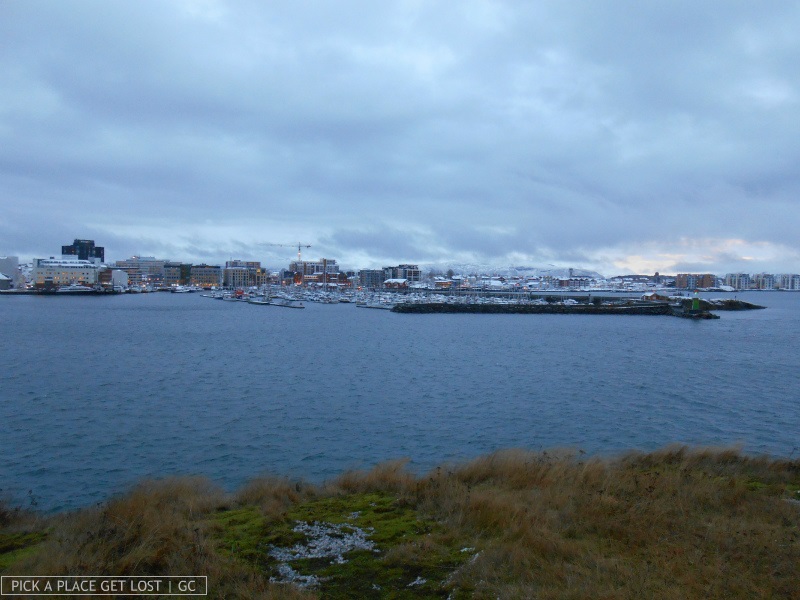 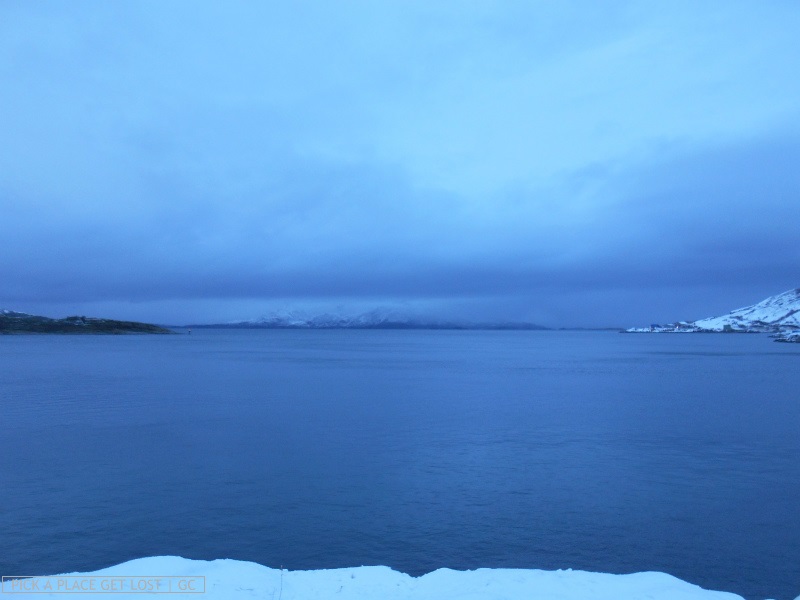 I wanted to stay around a bit longer, but the wind was blowing me away, plus it was getting darker by the minute. I had to resolve to head back to the city. As I walked downhill toward the road I bumped into a girl. Camera in hand, she was heading toward the fort. ‘So, anything interesting today up there?’, she asked when she saw me. She must have been a local and a regular visitor. ‘Yes! The sky is still pink, if you hurry you can still see it, it’s beautiful!’, I replied. Then I left.

Of all the places I went to in and around Bodø, Nyholms Skandse felt like the least obvious to visit, silent and deserted as it was when I was there. I guess it grows more touristy and popular, on average, in the summer. Yet, as with other places I saw over the few days I was around, it was nice to have it all for myself for a while.

Comfily nestled in my seat on the plane to Oslo, the next day, I tried recollecting random bits of memories from the previous days. I tried hard to explain what exactly made it so uniquely special this time – even more special than it’d ever been.

I don’t quite know the answer. I mean, I know that the Arctic landscape, the snow, the Arctic light (and the Arctic darkness), the sea and the beaches played quite a role. 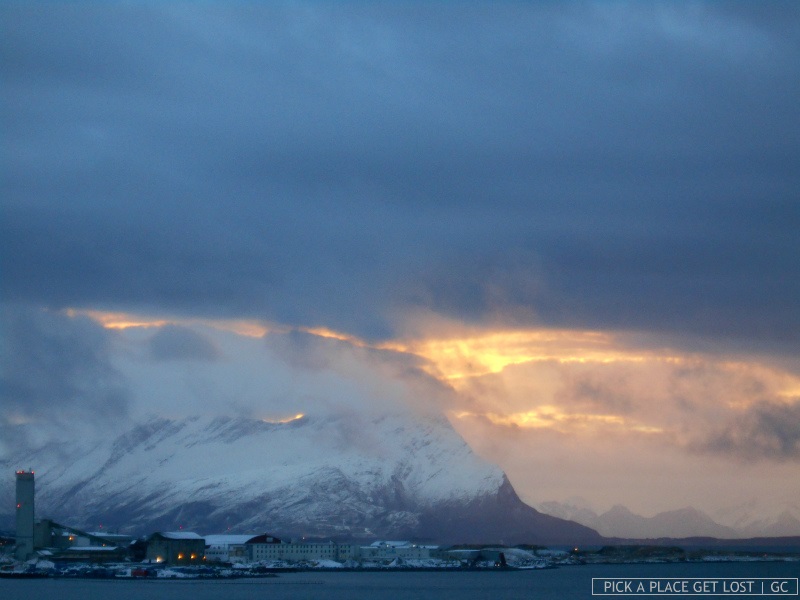 But maybe there was something else, like the fact that I hadn’t been to Norway in over a year (ohh sunny-not-sunny Trondheim), or maybe (also) the fact that the hostel staff happened to be from Czech Republic (seriously, Olomouc?!), and hearing all that Czech in Northern Norway was hilariously funny! And the guys from the hostel were so nice and friendly, and they’d even drive me to the airport when I had to leave.

Or maybe it was because my thing with Norway really is a kind of love story, after all. A long-distance one for now, but you know, never say never.

Thank you, lovely Bodø. Till next time.