Twelve hours. Twelve hours solid on a boat without ever getting off. I always said I’d pick up sailing at some point, and go on a one-week holiday out at sea, but on the morning of 19 July 2012 I seriously doubted I’d ever want that to happen to me. And by then I’d only been aboard the ship for about three hours or so. I felt doomed.

I’m the kind of person that needs to be on the move, to walk around freely and without time or space restrictions and constrictions, like being surrounded by the open sea. So being just there and technically having next to nothing to do was potentially lethal.

We’d boarded the Hurtigruten in Harstad around 8 o’clock in the morning and would be arriving in Stamsund (in the Lofoten archipelago) around 10 o’clock in the evening. Incidentally, we had no idea where we’d be sleeping that night, as we had yet to book any accommodation for the next two nights in Stamsund. But hey, Lofoten and Vesterålen were growing closer and closer! 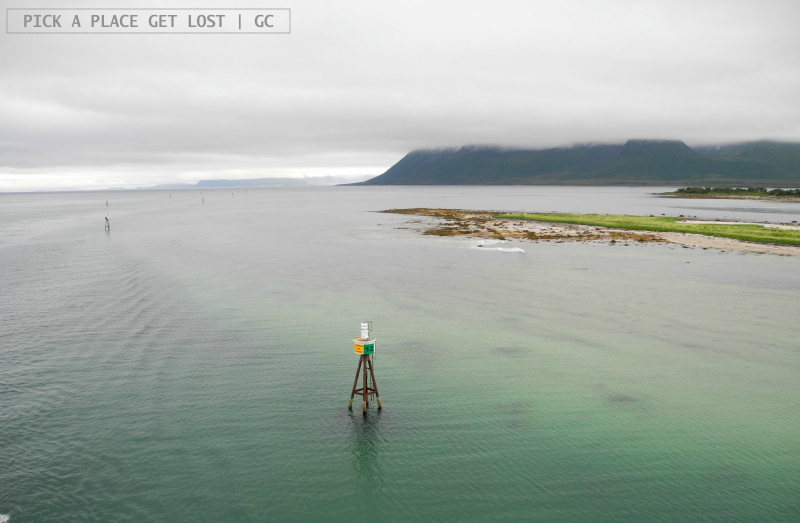 Plus, I mean, look at the view. THE VIEW. I guess it’s the view that saved me from cabin fever. It gave me an ongoing task to perform, i.e. monitor the scenery and how it changed by the minute. What’s more, Hurtigruten boats have several floors, so you can freely walk their decks and corridors (and do it repeatedly, if necessary), or climb the stairs to move from one floor to the other.

From experience I’d say there isn’t much to do throughout the voyage but patiently wait for the boat to reach your port of call. It is true, though, that contemplating the scenery for hours on end (while at the same time occasionally pondering about life and its countless perks) is what makes time go by. 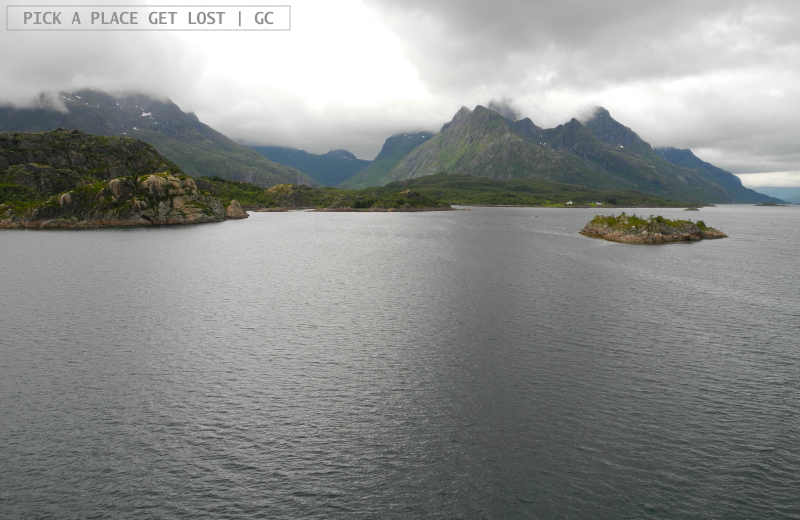 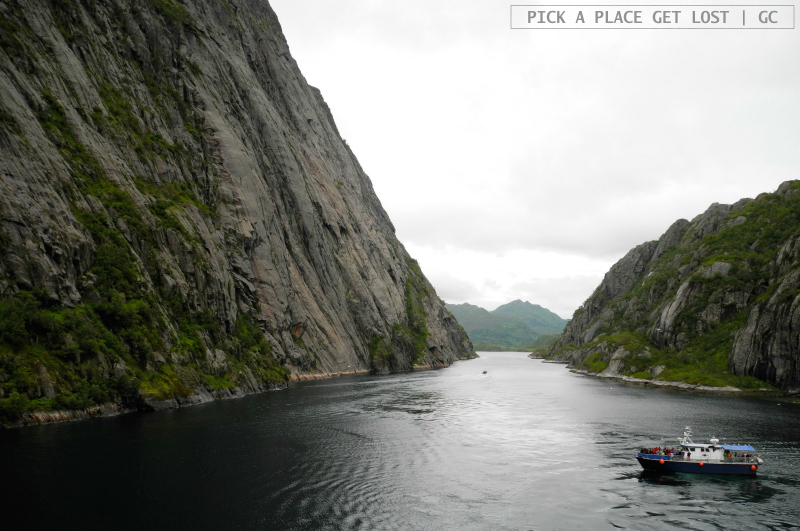 Needless to say, the scenery comes in countless forms. For a while we had the foggy, cloud-blanketed sky that made the water look like dark grey velvet. That was also when Bobby increasingly familiarised with the map of Norway and the Hurtigruten route from Bergen to Kirkenes as displayed on the deck.

Throughout the day we obviously had occasional showers, aimed at ensuring that later, when the rain stopped, you couldn’t sit on any deck chair or bench without wiping it first, unless you wanted to soak your bum (and jeans). Except, the family joyfully soaking in the deck hot tub as the rain poured down seemed to enjoy themselves loads! 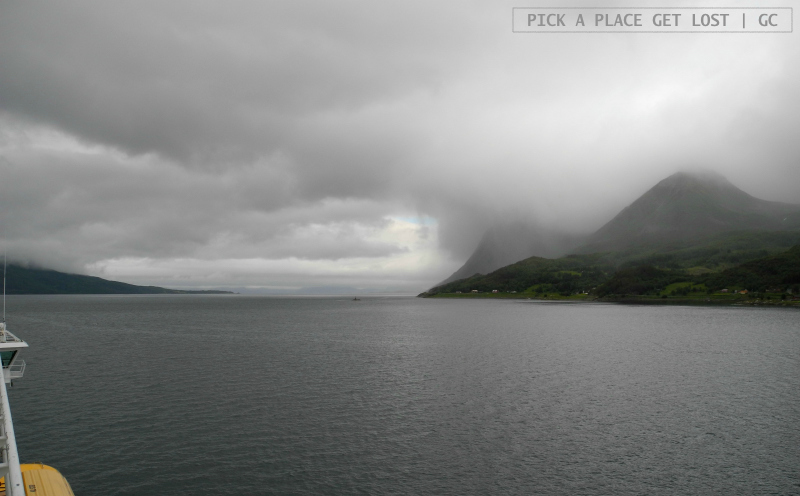 We also had unexpected (though scarce) bursts of sunlight and cracks of blue peeking through the thick layer of clouds. They only lasted briefly, but were more than enough to brighten up all things around and tinge the sea surface with the bluest shade of blue.

On a side note, we were even able to find accommodation before we made it to Stamsund. As we sat on (dry) benches on the deck, we leafed through our guide and came across this unpronounceable hostel name whose description met our (very basic) accommodation needs perfectly. Ringing up and booking two beds in a random dorm took about two minutes. 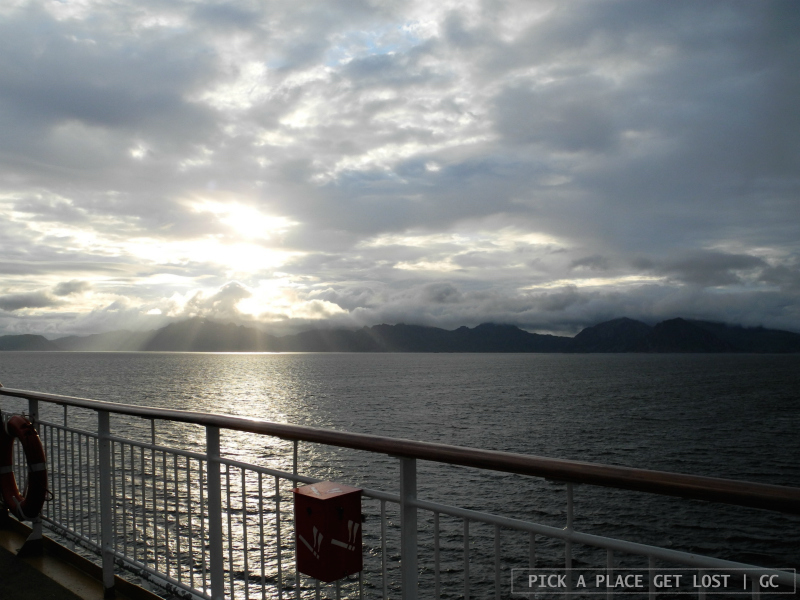 Apart from that, we alternatively stood and sat on the boat deck nonstop for a good zillion hours (with minor breaks here and there), because I had to make sure I kept an eye on the landscape. Admittedly, I did try Bobby’s patience very hard that day. Also, it kept getting colder and windier by the minute.

At some point, after watching the path of raindrops on the lounge glass for a while (during one such break), I went back to the deck and noticed that we were approaching Stamsund. 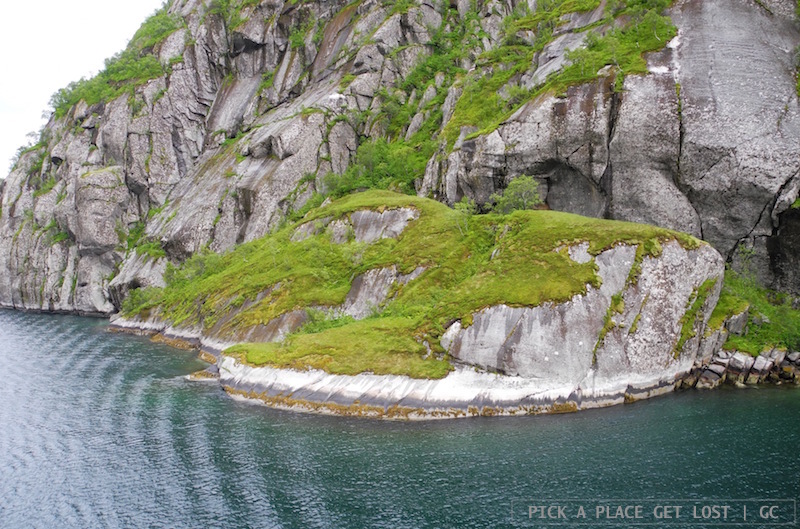 Walking on mainland felt like the weirdest thing, after so many hours out at sea. We had no idea how to reach the hostel, but the fact that there was one road and one main road only to follow did help. We randomly grabbed comfort food from the tiny food store near the port and headed for the hostel

It was ten o’clock in the evening and the sun was quite high, thought the warm, golden light seemed to hint at an impending sunset that was not going to happen. After all, much as I despise labels, we had just reached the ‘Land of the Midnight Sun’.

We couldn’t ask for a better welcome, but admittedly, the voyage had been equally rewarding itself. And we were only getting started.

P.S. #1: My final thought on going on a sailing holiday is that I can still do it, as long as I get occasional chances to briefly tread on mainland ground – or if I’m travelling to Tristan da Cunha.

P.S. #2: The hostel booked (the Vandrerhjem) was ace, one of my favourite hostel experiences ever. Which goes to show how things planned with barely any notice, if not altogether unplanned, are often (‘often’, not ‘always’) The Best Decisions You Could Possibly Make.